On a drizzly day in January 2018, Jeff Alson, an engineer at the Environmental Protection Agency’s motor-vehicles office, gathered with his colleagues to make a video call to Washington, D.C….They had made the same call dozens of times before.

Speaking from Washington, James Tamm, the NHTSA fuel-economy chief, greeted the EPA team, then put a spreadsheet on-screen. It showed an analysis of the tailpipe rules’ estimated costs and benefits. Alson had worked on this kind of study so many times that he could recall some of the key numbers “by heart,” he later told me.

Yet as Alson looked closer, he realized that this study was like none he had seen before. For years, both NHTSA and the EPA had found that the tailpipe rules saved lives during car accidents because they reduced the weight—and, with it, the lethality—of the heaviest SUVs. In 2015, an outside panel of experts concurred with them….But this new study asserted the opposite: The Obama-era rules, it claimed, killed almost 1,000 people a year.

“Oh my God,” Alson said upon seeing the numbers. The other EPA engineers in the room gasped and started to point out other shocking claims on Tamm’s slide. (Their line was muted.) It seemed as if every estimated cost had ballooned, while every estimated benefit had shrunk. Something in the study had gone deeply wrong.

As you may expect, should expect, it wasn’t an accident. Trump’s flunkies produced a report filled with lies designed to improve the profit structure for companies selling cars into the US market. And screwing the rest of the nation firmly to the wall of carbon pollution. Another Trump trophy for deceit and greed.

Fake news is a problem, everybody knows that. When technology helps bad actors spread lies and sow discord, it’s bad for democracy, which relies on citizens making considered judgments at the polls. It’s also a boon to authoritarians, who can stamp out criticism and bury unfavorable news by creating confusion about what’s true and what’s false.

The more interesting question is, what kind of problem is it?…

Two recent data points offer some hope. Last week, we wrote about big social media companies’ decisions to ban the conspiracy theorist Alex Jones, the latest sign that the big websites where fake news often spreads are becoming more engaged with the problem. Less well publicized was the fact that DARPA, the Pentagon’s research and development arm, has been making progress in developing tools that can detect so-called “deepfakes,” the ultra-realistic fake audio and video created using artificial intelligence that some people worry could unleash a torrent of politically-motivated fakery.

Part of the problem with fake news is that people tend to believe what they want to believe – technology won’t solve that. But with industry and government both now paying closer attention, maybe, just maybe, technology can make the problem more manageable.

Wonder what might affect the levels of “ignorant” and “gullible” in the United States?

❝ For a…prophetic vision of the future, you should read the complaint against Trump, his children and his foundation by New York State Attorney General Barbara Underwood…

Why prophetic? Because it’s likely a preface to the report or complaint that special counsel Robert Mueller will bring. The alleged crimes described by Underwood are not similar to those being investigated by Mueller. But the behavior is.

❝ U.S. history simply doesn’t offer a lot of reference points for a major-party political candidate who so casually subverts the law and sells out the nation’s highest values. How many Richard Nixons are there?

To believe the accusations that Trump colluded with Russia, laundered vast amounts of money and/or put American foreign policy on the auction block in return for the enrichment of his family requires an awkward leap of faith. You have to believe this leader is both profoundly corrupt — far more so than Nixon — and staggeringly sloppy — again more so than Nixon.

❝ It’s a familiar theme: each year, it seems, is the hottest year on record. The most recent climate change milestone in the U.S. occurred last month, when the country experienced its hottest May ever recorded. “Nature is dealing cards from a very different deck now compared to the 20th century,” climate scientist David Titley told USA Today. The average temperature for May in the lower 48 states was 65.4°F, 5.2°F above the average temperature for the month in the 20th century. Prior to this year, the record hottest May occurred in 1934, at the height of the Dust Bowl.

Meanwhile, our Fake President stops lying long enough to wander off into simple-minded fantasy and conspiracy theory. “Climate change is a Chinese hoax.” At a minimum it takes a chump to support Trump. There must be some limits to ignorance and blind faith, rejection of science and historic knowledge. 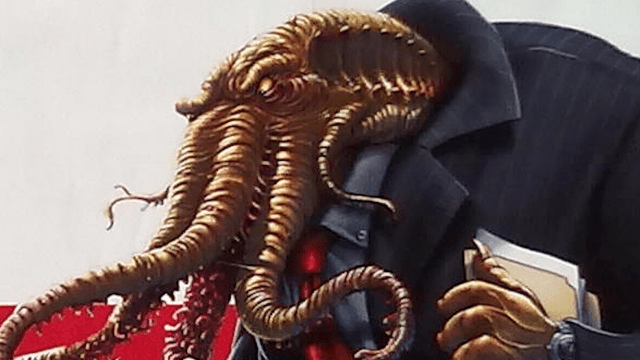 It is urgent for Americans to think and speak clearly about President Trump’s inability to do either. This seems to be not a mere disinclination but a disability. It is not merely the result of intellectual sloth but of an untrained mind bereft of information and married to stratospheric self-confidence.

George Will is someone I often disagree with — on democratic equality, on economics. Realistically, he is close to what I’d call a traditional American conservative with a small “c” – so, he gets to include honesty, thoughtfulness about science as virtues.

RTFA for the rest of what he has to say about the charlatan in the White House – put in place by millions of our neighbors and friends who understand none of this.

Click to enlarge — Yes, that’s the Trumpkins on the right

❝ Regular readers know that candidate Donald Trump had difficulty with facts. He earned an astonishing 59 Four-Pinocchio ratings over the course of the campaign.

❝ Now that Trump is president, he continues to make misleading statements, based on incomplete information, inaccurate statistics or flights of fancy. Here’s an accounting of his public statements in the first seven days as president, not counting his error-plagued inauguration speech (which had eight problematic claims). If we wrote a full fact check, we noted the number of Pinocchios the statement received.

❝ “I remember hearing [when I was young] from one of my instructors, ‘The United States has never lost a war.’ And then, after that, it’s like we haven’t won anything. We don’t win anymore.”…

❝ This is debatable. At the very least, one might count the 1991 Persian Gulf War and the end of the Cold War as victories for the United States…

❝ “I looked out, the field was — it looked like a million, million and a half people. … The rest of the 20-block area, all the way back to the Washington Monument, was packed.”

❝ “We have the all-time record in the history of Time Magazine. … I’ve been on it for 15 times this year.”

❝ Actually, Obama’s ratings in 2009 were 7 million people higher than Trump’s numbers. And second-term inaugurals tend to get lower ratings, so Trump is cherry-picking the comparison.

Click through to the whole article. Trump’s frequency of deliberate lies, number-fudging and ignorance hasn’t diminished with taking office.

You can sign up for The Fact Checker weekly newsletter