❝ Of course, all our plastic crap ends up in the Arctic.

❝ The Arctic, in our popular imagination, is a frozen expanse teetering figuratively and literally on the edges of human culture. It remains primal and wild and unsullied by human contagions…

The Arctic, as a physical place, is directly connected to the same ecosystems that we humans are polluting closer to home. It’s foolish to think that harming one part of a connected ecosystem doesn’t harm the others, as a study released on Wednesday in the journal Science Advances makes clear. The study found that even in the remote Arctic we can’t escape the megatons of plastic waste humanity unleashes upon the world…

❝ Plastic in the world’s oceans has been a growing concern since at least 1997 when Charles Moore stumbled across the Great Pacific Garbage patch as he crossed the Pacific after competing in the Transpacific Yacht Race. Today we know that there are at least six main garbage patches filled with plastic plaguing the seas. By some estimates as much as 300,000 tons of plastics are in the world’s oceans…

❝ Plastic in the ocean isn’t just unsightly. In fact, the plastic debris that we see is less of a problem than the plastic that is too small to see easily. That’s because plastic never biodegrades. It doesn’t revert back to its molecular elements the way other materials do.

Given enough time a leaf laying on the soil floor will be eaten by bugs and microbes to become soil that once again provides the tree with nourishment. Given enough time plastic will become a smaller piece of plastic. That’s it – this stuff never goes away. Eventually, after being buffeted about by sun and salt water, it becomes small enough that sea animals confuse it with morsels of food such as seaweed, or plankton. A 2015 study found that roughly 20 percent of small fish have plastic in their bellies. Researchers have also found that some northern fulmar’s, a sea bird that hangs out mostly in the subarctic, have elevated levels of ingested plastic. Plastic it seems, is not just an occasional snack, but a steady part of their diets. Tasty.

Most societies, most governments – which you might think would know better – still think of oceans as an open sewer. You can throw any of your society’s debris in and it will somehow disappear. 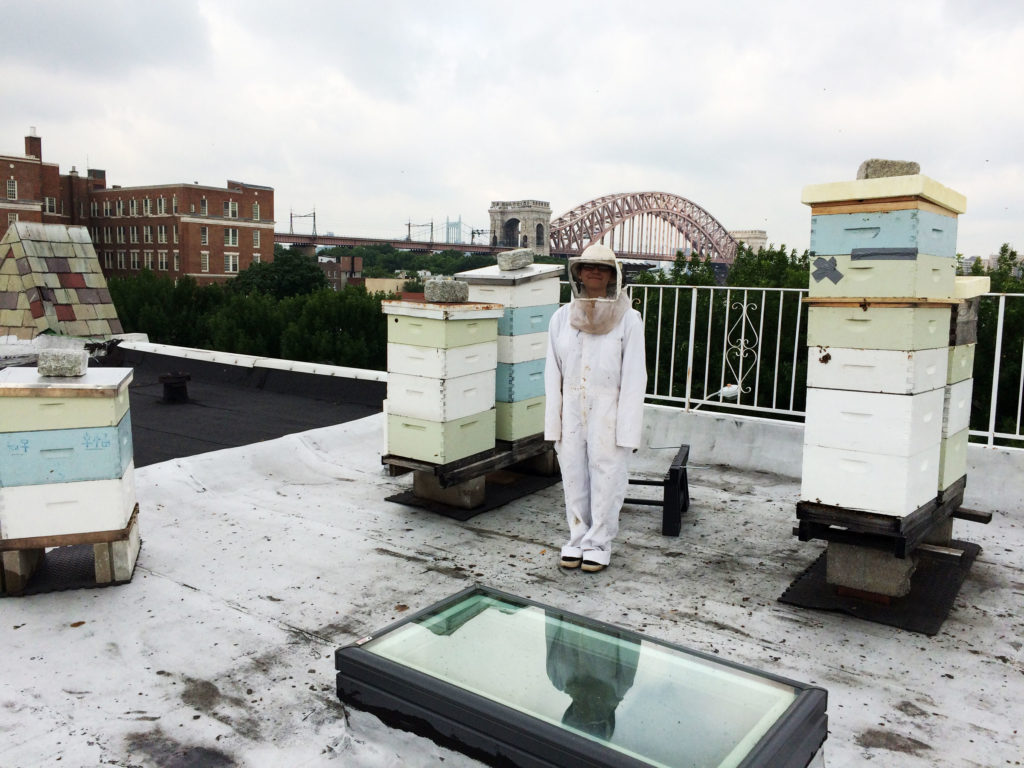 ❝ You share more than a zip code with your neighbors. You also share bugs — microscopic organisms (think bacteria, fungi, and viruses). These microbial communities are called microbiomes, and they seem to have an impact on everything from digestion to allergies. They also happen to be everywhere — from your intestines to your phone’s screen to the sidewalk beneath your feet.

But those bugs are tough to understand, because you can’t see them. “There’s like this whole other invisible planet,” says Kevin Slavin, head of the Playful Systems group at the MIT Media Lab. In a new project called Holobiont Urbanism, Slavin’s team is working to sample, sequence, and visualize the microbial makeup of New York City. Some of the team members are designers, engineers, and biologists.

Some of them are bees.

❝ Bees typically forage no more than a mile and a half from their hives, but in their expeditions they come into contact with the microbes in their range, and those microbes stick. Slavin’s group worked with apiarists to build beehives with removable trays at the bottom that collect detritus from the bees, like a crumb-catcher in a toaster. Then they put those hives all over Brooklyn and Queens (and Sydney, Melbourne, Venice, and Tokyo).

Researchers can gather up all those bee-crumbs and sequence the DNA they find. Subtract the bee genes and what’s left represents the neighborhood microbiome. Slavin’s team mapped all those genes into a a circular evolutionary tree…but for specific urban areas. They also mapped microbes to their homes. New York City and Sydney, for example, both harbor the genera Polaromonas, Sphingopyxis, and Alicycliphilus, all of which feed on pollutants. But Venice has Meyerozyma guilliermondii and Penicillium chrysogenum, two dampness-loving fungi associated with wood rot.

❝ What does that teach you about cities? Maybe not much. Cataloging bug DNA might not say much about the urban microbiome as a whole…just being able to see this invisible microbial world is at least a step toward understanding it…A city is about more than architecture and infrastructure and people; it’s about the bugs everyone shares, too.

Some of those little critters are harmful to us. Some aren’t. Many of them probably affect our lives in a number of ways which can’t be categorized in simple fashion. But, increasing knowledge also increases the likelihood of expanding understanding.

Site investigations and some cleanup work at 10 polluted mining complexes in four states were suspended because of conditions similar to those that led to a massive wastewater blowout from an inactive Colorado gold mine, U.S. Environmental Protection Agency officials said.

The sites include three in California, four in Colorado, two in Montana and one in Missouri, according to details obtained by The Associated Press following repeated requests for the information.

They have the potential for contaminated water to build up inside mine workings, EPA Assistant Administrator Mathy Stanislaus said. That would set the stage for a possible spill such as last month’s near Silverton, Colorado, where an EPA team triggered a 3 million gallon blowout of toxic sludge while doing excavation work on the inactive Gold King Mine.

Cleanup efforts on some of the mines have been going on for years yet remain unfinished, underscoring the complexity of a long-running attempt to address an estimated 500,000 abandoned mines across the U.S. Work on others was in the early stages.

In a report to Congress delivered Friday, the Government Accountability Office said federal agencies identified thousands of contaminated mine sites in recent years — even as their attempts to assess what harm is being done to people and the environment have lagged.

That includes categorizing their level of hazard. For those deemed a “probable hazard,” the EPA plans to keep the work stoppage in place until emergency plans are drawn up to deal with any accident…

The Aug. 12 stop-work order from EPA Administrator Gina McCarthy did not apply to sites where halting operations would pose a threat to people or increase the potential for harm to the environment, according to internal EPA documents.

Also exempted were portions of the 10 stopped projects where construction already was completed, such as treatment systems for contaminated water that pours continually from many abandoned mine shafts.

RTFA for a bit more detail on the additional sites, location, etc.. As well as the updated, upgraded emergency procedures added by the EPA’s cleanup contractor.

In an abandoned Hotel somewhere in Europe.


Herbal teas often contain unlisted extra ingredients such as weeds, ferns or bits of tree, according to a study by New York high school students that could help tighten labeling rules.

“A third of the herbal teas had things in them that are not on the label,” Mark Stoeckle, of the Rockefeller University who helped oversee the project…

The students collected dozens of teas and herbal teas and found extra ingredients in some including ferns, grass, parsley, other weeds and even traces of an ornamental tree, Taiwanese cheesewood, they said…

Stoeckle said extra ingredients such as camomile or parsley might be added deliberately to provide flavor or color. Or manufacturers may seek to sell full-looking tea bags and so pad them with filler.

“This is something that manufacturers and regulators could use,” Stoeckle said of the DNA technique for tea. Importers, for instance, could double check if a shipment of dried leaves is really tea.

We used to have a fave herbal tea that we called Monty Python tea because – one of the major ingredients was “The Larch”.