” For its first residential development, the Italian clothing giant Diesel has come up with a marketing strategy that stays true to its fashionista roots.

” The company has unveiled a new series of 143 T-shirts priced from $370,000 to $5.5 million dollars. The shirts are made out of ordinary white cotton, not molten gold, and are not adorned with diamonds or jewels of any kind.

Instead, each T-shirt bears the floor plan of a unit at the Diesel Wynwood Condominium…Buy the T-shirt, get the corresponding condo.

Wonder how long the line was when they started selling these, last week?

Authorities refer to the gas thieves’ converted trucks as moving bombs because of the hazard they pose if one were to crash and explode. “They’re out there, they’re so common — trying to blend with people who go to work every day,” said Florida Highway Patrol Trooper Alexis Otano. “God forbid one of these vehicles gets into an accident…”

❝ Since pulling over his first bladder truck in 2017, Trooper Otano has become an expert in identifying the modified trucks as they trundle down South Florida’s roads, laden with stolen diesel fuel.

According to him, the trucks function like “mobile gas stations,” their drivers using stolen credit card numbers to siphon off gas for free and then resell it to truckers in depots or to construction companies and tradesmen.

RTFA. Alas, such was part of my misspent youth. I recall – not fondly – driving a souped-up 1938 Ford Pickup from Western Massachusetts down to Danbury, Connecticut, with 200 gallons of high test in the hollow bed of the truck.

Pay was great…for a sixteen-year-old. A hundred buck$ in 1954. Still, good sense prevailed and I only did it one time. [That truck up top is only for illustration BTW.]

The pace at which China exports the fuel it doesn’t want is set to jump by more than four times in 2018, according to the nation’s biggest energy producer.

That’s a harbinger of bad news for processors in the rest of Asia — from South Korea to Japan and India — who now have to contend with higher crude prices as well as the threat of the flood dragging down refining margins. Government-issued quotas to sell oil products abroad may also expand this year in order to ease a large supply glut in the domestic market, an analyst at China National Petroleum Corp. said on Tuesday.

China’s net oil-product exports — a measure that strips out imports — may climb about 31 percent to 46.8 million metric tons this year, CNPC said in its annual report released in Beijing. Shipments rose about 7 percent in 2017.

In particular, exports of diesel — also known as gasoil — are expected to soar 47 percent to 23.8 million tons in 2018 from a year earlier, according to the CNPC report.

Yup. Countries smart enough to walk away from fossil fuels, pollution, economists and politicians with fossilized brains – end up with “problems” like selling off the excess crap they no longer need or want. One of the early results from switching to renewables like wind and solar-generated electricity. 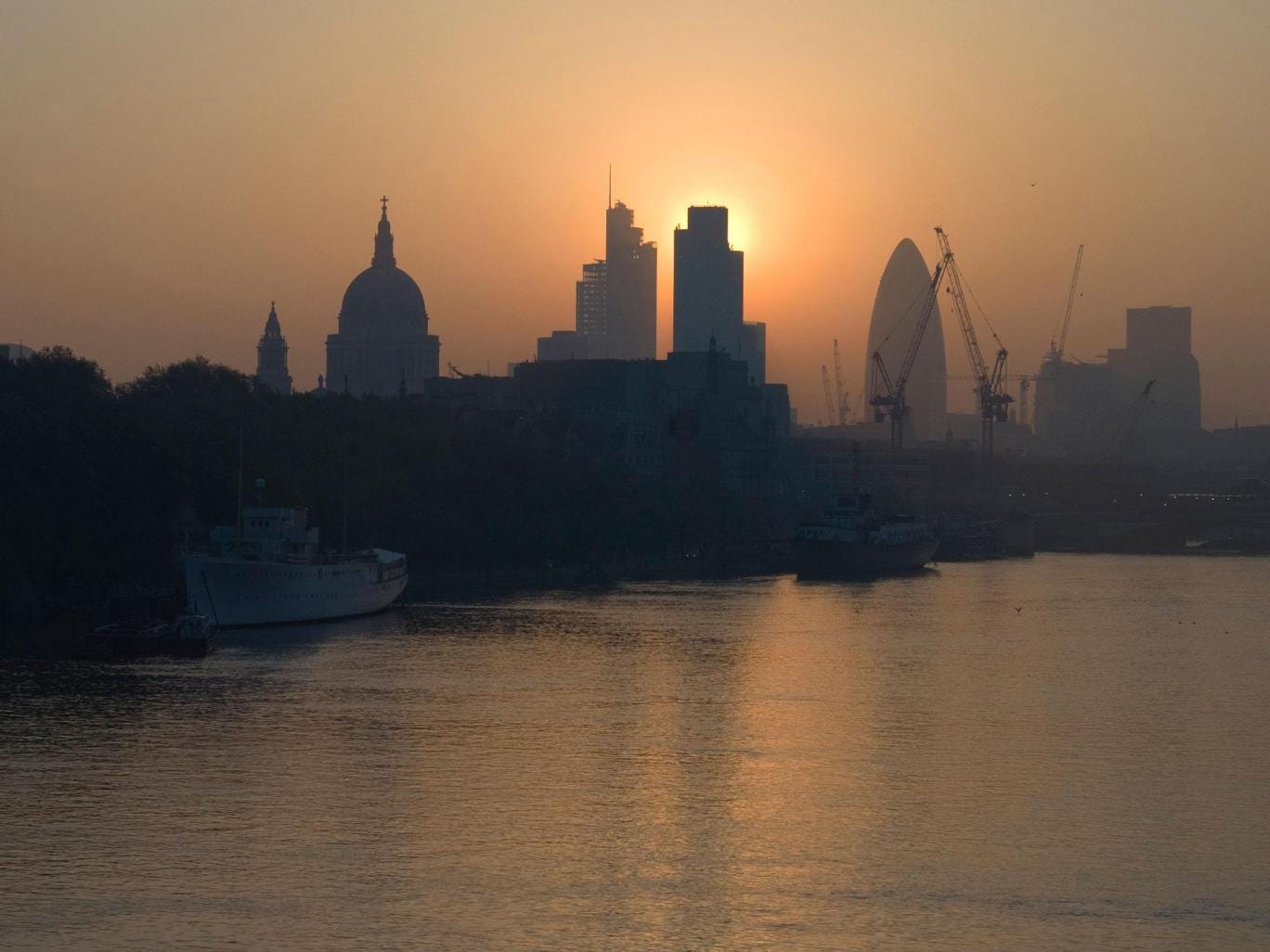 A smoggy day in London town…

❝ The hearts of people who live in polluted areas are weaker than those who regularly breathe cleaner air, according to a new study which adds to the growing volume of evidence that fossil fuels are killing us.

❝ According to a UK government estimate, about 40,000 people die prematurely because of the air they breathe…

❝ The process by which air pollution harms the body has been poorly understood. Until recently it was not known if fine particles could pass through the lungs into the bloodstream.

However, a study in which volunteers inhaled gold nanoparticles showed it was possible for this to happen with gold showing up in their blood and urine 15 minutes after they had breathed it in. The particles were still there up to three months later.

…Shouldn’t surprise anyone, that is, except heartless conservatives!

With the eight lanes of France’s most famous avenue cleared of all traffic on Paris’s first car-free day, the usual cacophony of car-revving and thundering motorbike engines had given way to the squeak of bicycle wheels, the clatter of skateboards, the laughter of children on rollerblades and even the gentle rustling of wind in the trees. It was, as one Parisian pensioner observed as she ambled up the centre of the road taking big gulps of air, “like a headache lifting”.

There were other weird and pleasant effects of this tiny glimpse of carless utopia. “Everyone seems to be smiling, and not as stressed,” marvelled Elisabeth Pagnac, a civil servant in her 50s, who had been emboldened to cycle in from the eastern edge of the city without a helmet. But strangest of all was the sky.

“I live high in a tower block in the east of the city and looking out of my window today I saw the difference straight away: the sky has never been this blue, it really is different without a hazy layer of pollution hanging in the air,” she said.

Others agreed that looking up towards the Arc de Triomphe and to La Défense beyond, a view that was so often hazy and distorted by the city’s famous smog was suddenly crystal clear.

“What a joy to go down the middle of the road taking in the sights,” said Claude Noirault, a wheelchair-basketball coach, who had done 10km in his sports wheelchair and was planning 30km more.

When Anne Hidalgo, the mayor of Paris, launched the idea of the French capital’s first car-free day at the suggestion of the collective Paris Without Cars, pollution was top of the agenda…

Hidalgo, launching the event with other mayors who have already pioneered car-free days, including the mayor of Brussels, said the initiative showed people “are not obliged to move around in a personal car, there are other ways to approach mobility in a city”.

It wasn’t a complete success. RTFA. The sophistry brigade will find plenty to whine about, Left or Right.

The core commitment to a day without fossil fuel pollution in the City of Light let in lots of sunlight. A fresh beginning.

The EPA is accusing Volkswagen of illegally using software to cheat emissions standards, allowing the German automaker to sell half a million cars that produce nitrogen oxide, which creates smog, at up to 40 times the legal limit.

In a notice of violation of the Clean Air Act sent to Volkswagen AG, Audi AG, and Volkswagen Group of America, today, the EPA said diesel-powered VW cars used a “defeat device,” a kind of “a sophisticated software algorithm [that] detects when the car is undergoing official emissions testing, and turns full emissions controls on only during the test. The effectiveness of these vehicles’ pollution emissions control devices is greatly reduced during all normal driving situations.”

The White House has directed VW to recall the affected cars, and the automaker will be required to fix the problem, at no cost to car owners.

The majority of diesel-powered passenger cars in the country are sold by the Volkswagen group – which includes Audi.

Joule has pioneered a CO2-to-fuel production platform, effectively reversing combustion through the use of solar energy. Free of feedstock constraints and complex processing, this platform can achieve unrivaled scalability, volumes and costs without the use of any agricultural land, fresh water or crops.

Unlike products derived with complexity from petroleum or biomass, Joule Sunflow® products are produced in a direct, continuous process from abundant resources. The novel CO2-to-liquids conversion requires only sunlight, non-potable water and proprietary catalysts that are tailored to produce specific products, including ethanol and hydrocarbon fuels that are inherently compatible with existing infrastructure.

…This uniquely modular system can achieve replicable productivity, whether installed across 100 or 1,000 acres, mitigating scale-up risks and ensuring stability of supply. At full-scale commercialization in ideal locations, the company ultimately targets 25,000 US gallons of Joule Sunflow®-E (solar ethanol) or 15,000 US gallons of Joule Sunflow®-D (solar diesel) per acre annually, for approximately $1.20/US gallon ($50/barrel).

Joule has successfully pilot-tested its platform for over two years, initiated demonstration-scale operations, and assembled a specialized team to lay the groundwork for commercial deployment. The company is moving rapidly to commercialize Joule Sunflow-E, with Joule Sunflow-D and additional hydrocarbon fuels to follow.

Phew! The link above is from the “about us” statement at their website. Wander through the whole site starting here. Looks interesting. A winner if it works.

Had this link in the hopper for a short spell and just got round to clicking through.