Lyle Darrah was on a conference call at work when the riot at the U.S. Capitol started on Jan. 6. When his boss mentioned what was happening, he turned on news coverage — and immediately felt his last allegiance to the Republican Party slipping away…

Later, Darrah, age 49, sat in his living room and pulled up the state’s voter registration website. And then, like thousands of other Coloradans in the wake of the insurrection, he left the Republican Party…

In the week from Jan. 6 through Jan. 12, about 4,600 Republicans changed their party status in Colorado…There was no comparable effect with any other party…

The number of people changing parties spiked immediately after the Capitol breach, though their motivations varied widely. About 200 made the same dramatic leap as Darrah, choosing to join the Democratic Party. Hundreds more went to conservative third parties…

…Interviews and data analysis show how the tumultuous post-election period, driven by the former president’s false claims of a stolen election and culminating in the Capitol riot and the current impeachment effort, has created a new split within the Republican Party. 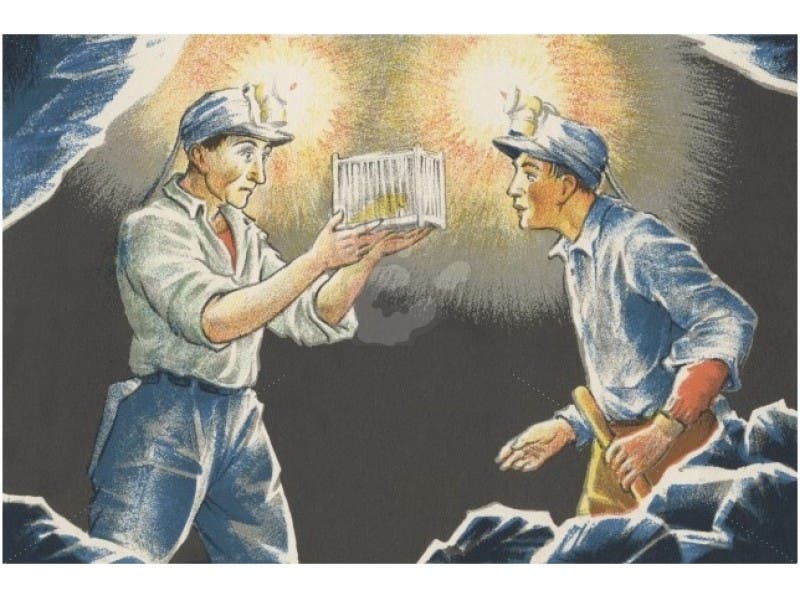 Canary in a coal mine

❝ Fair is a scientist at Los Alamos National Laboratory with a focus on epidemiology and animal disease ecology. She is the principal investigator for a long-term research project on the impacts of contaminants on avian populations…

I still chuckle when someone “discovers” that previously-acceptable levels of radioactive exposure and contamination are no longer OK. Forgive my cynicism; but, I worked in a research lab decades ago where half the scientists and researchers told exactly the same tale of work and radiation. Whichever lab handed over their paychecks in the name of “defense” and atomic weapons – made no difference. Every couple of years new research was announced describing how the level of radiation they were accumulating was considered safe no longer. They’d have to move on to a new job, less radiation, until they finally ended up on my turf – developing metallurgy for atomic power generating electricity. No radioactive sources on the premises.

I pay heed to those scientists whose analysis concludes that NO level of added atomic radiation is safe. 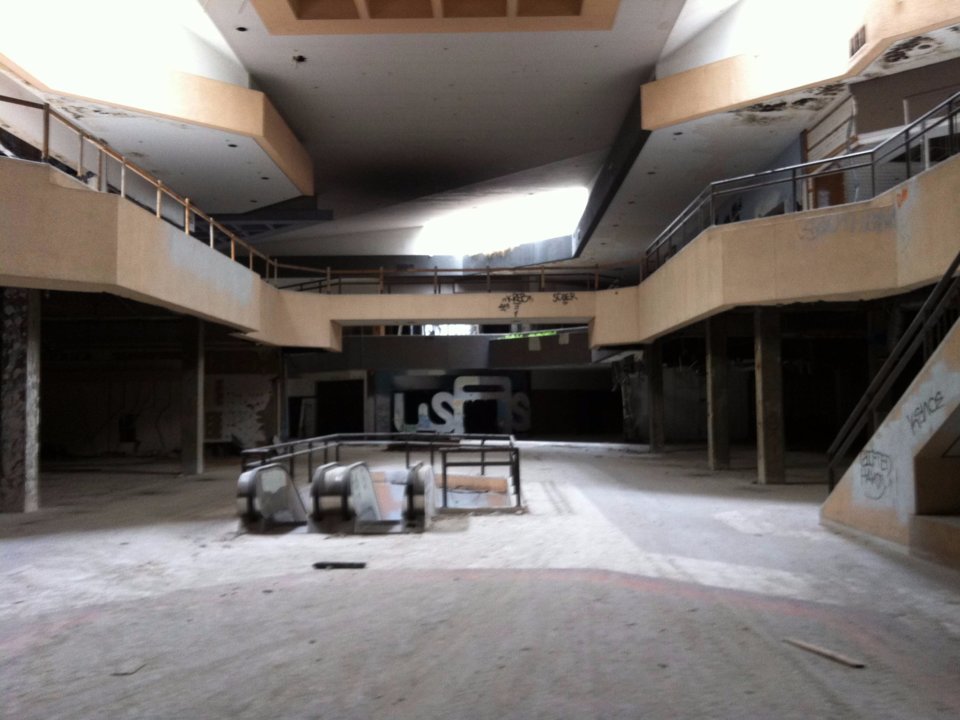 ❝ The retail apocalypse has descended on America.

❝ More than 3,800 store s are expected to close across the country this year. Department stores like Macy’s, Sears, and JCPenney, and retailers including Toys R Us, BCBG, Abercrombie & Fitch, and Bebe have decided to close dozens of stores.

A new survey by commercial real estate company Reis found that malls are emptier than they have been since 2012…The vacancy rate in regional and super-regional malls hit 8.6% in the second quarter, up from 8.4% in the prior quarter.

Not a big fan of Business Insider. They’re often guilty of letting demented editors title articles as if they were written by click-bait pimps. I’m likely to skip a noteworthy article because of obvious overblown presentation. This piece is an exception.

❝ Arctic sea ice, the vast sheath of frozen seawater floating on the Arctic Ocean and its neighboring seas, has been hit with a double whammy over the past decades: as its extent shrunk, the oldest and thickest ice has either thinned or melted away, leaving the sea ice cap more vulnerable to the warming ocean and atmosphere…

❝ Direct measurements of sea ice thickness are sporadic and incomplete across the Arctic, so scientists have developed estimates of sea ice age and tracked their evolution from 1984 to the present. Now, a new NASA visualization of the age of Arctic sea ice shows how sea ice has been growing and shrinking, spinning, melting in place and drifting out of the Arctic for the past three decades.

“Ice age is a good analog for ice thickness because basically, as ice gets older it gets thicker,” Walt Meier said. “This is due to the ice generally growing more in the winter than it melts in the summer.”…

❝ The new animation shows two main bursts of thick ice loss: the first one, starting in 1989 and lasting a few years, was due to a switch in the Arctic Oscillation, an atmospheric circulation pattern, which shrunk the Beaufort Gyre and enhanced the Transpolar Drift Stream, flushing more sea ice than usual out of the Arctic. The second peak in ice loss started in the mid-2000s…

❝ “We’ve lost most of the older ice: In the 1980s, multiyear ice made up 20 percent of the sea ice cover. Now it’s only about 3 percent,” Meier said. “The older ice was like the insurance policy of the Arctic sea ice pack: as we lose it, the likelihood for a largely ice-free summer in the Arctic increases.”

Looking at couples over the first nine years of marriage, the study found:

• The relationship between marijuana use and reduced partner violence was most evident among women who did not have histories of prior antisocial behavior.

The study’s lead author is Philip H. Smith, PhD, a recent doctoral graduate of the UB School of Public Health and Health Professions and now associate research scientist in the Department of Psychiatry at Yale University.

Exactly the sort of scientific research that can benefit society and law. Guaranteed to be ignored by the overwhelming majority of our lawmakers – and the idjits who vote for them.

Still, the important part is that scientists are unrelenting in their curiosity, the quest for knowledge regardless of opposition from Philistines.

The falloff in credibility affects news organizations in most sectors: national newspapers, such as the New York Times and USA Today, all three cable news outlets, as well as the broadcast TV networks and NPR.

Facts are a real problem for conservatives aren’t they?

The partisan difference in news providers – to me – is a pretty accurate reflection of what has become the predominant ideology in the Republican Party. If the news and the world are presenting facts, information, anecdotes which contradict what they believe should be reality – than the reporting is wrong – not the reality Republicans believe in.

Take away the portion of results skewed by a Republican belief system and all the news organizations are believable except Fox News.

Republicans have moved from a political analysis and ideology to being a religion. And that is concurrent with the influence of fundamentalist religions within the rank-and-file as well leadership of that party. Sad but true.

Your morning cup of coffee may start to taste even better after a major government study found that frequent coffee drinkers have a lower risk of dying from a variety of diseases, compared with people who drink little or no coffee.

The report…analyzed the coffee-drinking habits of more than 400,000 men and women ages 50 to 71, making it the largest-ever study of the relationship between coffee consumption and health…

As expected, the researchers found that the regular coffee drinkers in the group were also more likely to be smokers. They ate more red meat and fewer fruits and vegetables, exercised less and drank more alcohol – all behaviors associated with poor health.

But once the researchers controlled for those risks, the data showed that the more coffee a person consumed, the less likely he or she was to die from a number of health problems, including diabetes, heart disease, respiratory disease, stroke, infections and even injuries and accidents.

Neal D. Freedman, the study’s lead author and an investigator for the National Cancer Institute, cautioned that the findings, based on observational data, show only an association between coffee consumption and lower risk for disease, so it isn’t known whether drinking more coffee will lead to better health. As a result, Dr. Freedman said that people should be conservative in interpreting the data, but that regular coffee drinkers can be reassured.

“It’s a modest effect,” he said. “But the biggest concern for a long time has been that drinking coffee is a risky thing to do. Our results, and some of those of more recent studies, provide reassurance for coffee drinkers that this isn’t the case. The people who are regularly drinking coffee have a similar risk of death as nondrinkers, and there might be a modest benefit…”

It is less than startling that the complex molecules resulting from brewing coffee contain many surprises. Coffee as a popular beverage has already exceeded the range of use one might expect from its use simply as stimulant. I admit to feeling smug that one of my morning pleasures has more positive characteristics than I assumed.

Now, I just need someone to determine what food group increases the likelihood of my fellow Americans acquiring a lifetime interest in education, science and honest government. I’d buy farmland tomorrow and start cultivation.

The quick description of this video is: Fareed Zakaria, editor-at-large at Time Magazine and host of CNN’s “Fareed Zakaria GPS” program, discusses his book “The Post American World” and the U.S. economy.

Is that enough for your brunch plate?

An example of why I record Tom Keene’s SURVEILLANCE MIDDAY, every day. Some days only a few minutes is interesting, some days the hour flies by and I have to rewind a few times to absorb the complete spectrum of ideas and analysis – from economics to politics, history to baseball – that’s offered in 3 or 4 segments.

I saved this interview with Fareed Zakaria to discuss after supper, last night, with my wife. An advantage of having this on a recorder is that as a point offered by either of these scholars prompts a response – we can stop the playback and discuss it together.

One of the brightest facets in the life we share.

Heart attacks dropped by 24 percent in a large cross section of Northern Californians over the past decade, most likely due to less smoking, better blood pressure control, and lower cholesterol, a new study reports.

What’s more, rates of the most severe type of heart attack dropped by 62 percent, according to the study, published this week in the New England Journal of Medicine.

“We believe improvements in targeting risk factors are in part responsible,” says the study’s senior author, Dr. Alan Go, M.D., the assistant director for clinical research at Kaiser Permanente, in Oakland, California. “We’ve observed in our population that fewer people are smoking, and there’s better control of blood pressure and cholesterol…”

The plunge in heart attack rates may not reflect trends elsewhere in the country, or even in other Northern Californians, however. Although the study patients were ethnically diverse and ranged in age from 30 to 90-plus, they all had one thing in common: They were insured and received quality preventive care…

While heart attack rates were falling among the people in the study, Brown points out, rates of diabetes and obesity continued to climb across the nation as a whole. “We are still facing an epidemic that is causing a gradual-to-rapid increase in heart disease-related deaths,” he says.

And heart disease is not equally distributed across the U.S., Pearson notes. Southeastern states, and especially the regions lining the Mississippi and Ohio River Valleys–a swath collectively known as “Coronary Valley”–are among the hardest hit, he says.

Though the population in the study isn’t representative of the nation as a whole, the findings do highlight the changes that need to be made to heart disease care, Brown says.

If the health-care system can transition from “dealing with problems” to “creating sustainable lifestyle changes in our communities,” Brown adds, “we can prevent the onset of chronic illness in our country beyond that of heart disease alone.”

Hrmph. That requires moving politicians in general and Congress in particular to decisions that challenge the insurance and health care establishment in America. Should I hold my breath waiting for that to happen?

Does that sound too cynical?