❝ An experiment led by Assistant Professor Linda Thunstrom, of the Department of Economics in UW’s College of Business, found that Christians who suffer such adversity value thoughts and prayers from religious strangers, while atheists and agnostics believe they are worse off from such gestures…

❝ The debate over the value of “thoughts and prayers” has come to the forefront as a result of the verbal responses of political and other leaders to mass shootings and natural disasters such as hurricanes and wildfires. Some critics argue that expressing sympathy through thoughts and prayers is a meaningless gesture in response to tragedy — and that, in some cases, it’s an excuse to not take action…

Likewise, Christians value thoughts from a religious stranger at $3.27, while non-religious people negatively value the same gesture at -$2.02.

You can find details over here. Chuckles pretty much anywhere. 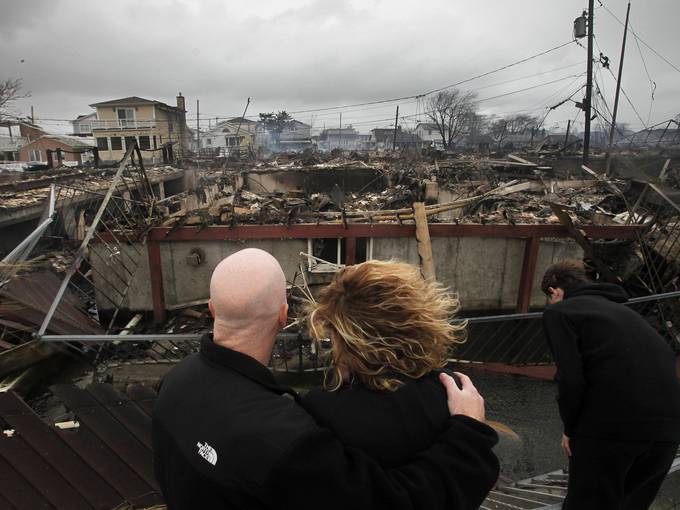 “We were told the bill was coming up as is,” Rep. Peter King, R-N.Y., who represents hard-hit central Long Island, told The Hill.

But instead, conservative House Republicans outside the Northeast submitted 92 amendments to the package to either cut spending they saw as non-essential or demand budget cuts in popular programs elsewhere to offset the Sandy package.

Congress has historically not offset disaster relief with spending cuts, and lawmakers from states hit by Sandy expressed outrage by proposals to do so now.

At least 15 of the 92 amendments would likely make it to the House floor Tuesday, King told The Hill, adding, “Some of them would kill the bill.”

Boehner made assurances to King and other Northeastern lawmakers after adjourning the previous Congress without taking up a $60.4 billion aid bill the Senate had passed to finance recovery efforts in the hurricane-battered states…

Sandy, which struck the Northeast Oct. 29, has been blamed for 131 deaths and $63 billion to more than $80 billion in damages.

It wiped out entire communities in coastal New York and New Jersey, paralyzed mass transit systems and left tens of thousands of people homeless. Power was cut to more than 8 million homes in 16 states and Washington, D.C.

These slimeballs don’t deserve their paychecks. They base their policies on hatred, bigotry, regional jealousy – every leftover ideological turd from the days of the Confederacy. They hate folks who accept civil liberties for all, they hate the educated, they fear representative republican government.

The anarchy of America’s rightwing is the least justifiable political current in American history. Responsible in the past for isolationism, the cancer of racism and sexism in American life. The only achievements of this backwards ideology in recent decades is the decline of American education and the widening gap in income between the super-rich and regular working class families.

What human beings would be proud of kicking their neighbors when they are down – instead of helping?

An anonymous donor has left a wad of cash worth $131,000 in a public toilet in Japan, with instructions it be used to help victims of the March earthquake and tsunami…

A plastic shopping bag, containing 10 million yen, was found on September 22 in a toilet for disabled people in the city hall of Sakado, a commuter town north of Tokyo, a city official told AFP.

The city will give the money to the Japanese Red Cross if the anonymous donor doesn’t reclaim it within three months, city spokeswoman Masumi Sekiguchi said.

She said a hand-written note was attached to the cash, reading: “I’m all alone. I have no future so let the people in Tohoku use it.”

Tohoku is the country’s northeast region devastated by the catastrophe that killed 20,000 people and triggered an emergency at the Fukushima Daiichi nuclear power plant.

“There was no witness to the act and we cannot guess what kind of person has been involved,” she said. “We were really surprised. We also feel thankful for such kindness.”

An ordinary human being.

As rescuers raced Tuesday to free people trapped by floodwaters caused by Hurricane Irene, Washington politicians bickered over how to pay for it.

With conservative House Republicans calling for spending cuts to offset any increase in emergency funds — a condition opposed by many Democrats — the ability of Congress to act quickly on the issue remains uncertain.

“The notion that we would hold this up until Republicans can prompt another budget fight and figure out what they want to cut, what they want to offset in the budget, and to pit one section of the country against the other and to delay this and create this uncertainty, it’s just the latest chapter and I think one of the most unsavory ones of our budget wars,” said Rep. David Price, D-North Carolina.

Irene first made landfall on the U.S. mainland in North Carolina, devastating some coastal areas. Price said GOP efforts led by House Majority Leader Eric Cantor of neighboring Virginia to offset additional emergency funds amount to “an untenable position and one that simply is unresponsive and insensitive to the kind of situation we face…”

Even the White House got involved in the fracas, with Press Secretary Jay Carney telling reporters Tuesday that he wished Cantor and other conservative Republicans had the same commitment to spending offsets “when they ran up unprecedented bills and never paid for them” during the administration of President George W. Bush.

Cantor and his fellow royal Republicans never address the question of need when confronted. They only answer questions with one question, the only one that counts to Republican elitists: cost and budget?

The hypocrisy of Democrats who blather about Congressional Republicans during the Bush years of fiasco ignores how many of that spineless lot rolled over and stuck all four feet in the air any time Bush ordered more funds for his wars. You know which wars. The two that Obama has continued to staff with American troops.

But, the essential question remains – where are your priorities? FEMA proved the result of the reforms brought to that incompetent organization comes from having solutions in place before the disaster starts to kill and destroy. FEMA’s readiness easily eclipsed Bush’s fiddling style of sending a questionnaire round to be filled out after death and destruction – guaranteeing days and weeks before aid reached the people who needed it.

Cantor’s loyalty to corporate accountants assures him a place in infamy. That’s truly saying something in the history of Congressional scum.