Here’s a deceptively simple way to close part of the achievement gap between poor and wealthy students: make sure that poor students are in school as much as their richer peers.

A recent study found that absentee rates could explain up to 25 percent of difference in math scores between low-income students and less disadvantaged ones. Getting kids to come to school seems like an obvious way to help them score better on tests and eventually graduate. But it’s often overlooked in favor of more complicated, more controversial, and more interesting interventions. Here’s why attendance is incredibly important, and why it’s a tough problem to solve.

Going to school is required by law, and studies tend to assume that schools are following through. Schools aren’t required to report how many students are chronically absent, so very little national data exists on how often students miss school. Even the definition “chronically absent” varies, although the generally accepted definition is around 20 days of school per year…

Missing school means they fall even farther behind. Children who are chronically absent in preschool and kindergarten are more likely to be held back in the third grade. As early as sixth grade, whether a child is going to school is a good indicator for whether she’ll ever graduate high school.

The opportunism of New Mexico politicians is almost beyond comprehension. When it became obvious kids were falling behind – checking grades, accomplishments by 3rd grade, 6th grade – the solution that guaranteed the most votes for state legislators is called the social pass. If the school determines a child’s grades are so poor they shouldn’t be passed along to the next grade – that kid’s parents can demand a social pass and the child moves along to the next grade with their classmates – so their feelings aren’t hurt.

K-12 attendance can even predict college graduation rates: Johns Hopkins cites a study in Rhode Island found students who were chronically absent in high school, but still managed to graduate and enroll in college, were more likely to drop out during their freshman year than students with regular attendance records.

RTFA. Lots more of the same examined from different perspectives. My BITD look doesn’t surprise me because I saw examples of this laissez-faire crap starting up in the 1950’s into the 1960’s. Students graduating high school who were functional illiterates. They didn’t have to study literature, build reading skills, learning skills, if they didn’t feel like it. That was sufficient reason.

Just walk that along each decade through attendance, any other standards you care to examine. 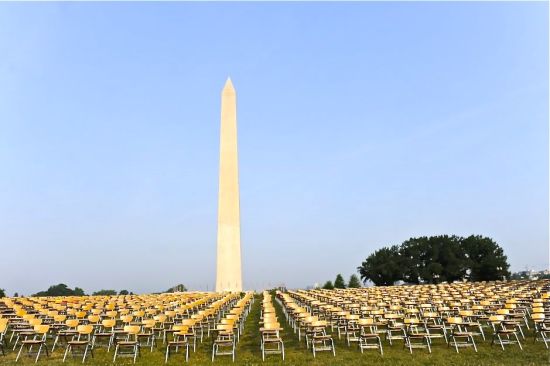 Tourists trying to figure out how to reach the capital’s monuments and museums on Wednesday found something on the National Mall that was not on their maps: 857 student desks arrayed near the Washington Monument.

Each desk represents one of the 857 students who drop out of high school in the United States every single hour, every single school day, according to the College Board, which arranged the display to underline its effort to urge presidential candidates to put education at the top of their to-do lists.

The board had nearly a dozen people, iPads in hand, gathering signatures in nearly 100-degree weather for an online petition that said: “If you want my support, I need to hear more from you about how you plan to fix the problems with education. And not just the same old platitudes. I want to know that you have real, tangible solutions, and that once in office, you’re ready to take serious action. I’ll be watching your acceptance speech at your party’s convention…”

The man responsible for executing the display is Adam Hollander, 38, of New York, executive creative producer for Brand Marketers. “We now live in a very visual culture,” he said, his complexion florid after hours in the sun on Tuesday. “Now, you have to see it to believe it. Everybody hears that 857 number, but it doesn’t really mean anything until you’re able to see it.”

Both President Obama and Mitt Romney, his presumptive Republican opponent, often mention the importance of education, usually in the context of fixing the country’s economy and creating jobs, or of making college more affordable — the subject of a speech by Mr. Obama in January. In a speech in May, Mr. Romney proposed allowing poor and disabled students to use federal money to attend any public, private or online school they choose.

Taxpayer-funded vouchers for parents who want to send their kids to private schools has absolutely nothing to do with improving our public school system.

END_OF_DOCUMENT_TOKEN_TO_BE_REPLACED

With one in four U.S. public school students dropping out of high school before graduation, America continues to face a dropout epidemic. Building a Grad Nation: Progress and Challenge in Ending the High School Dropout Epidemic…shows that we can end the dropout epidemic, even in schools from lower-income, urban and rural districts that many previously thought were hopeless…

The U.S. graduation rate increased from 72 percent in 2002 to 75 percent in 2008. The report reveals that the number of “dropout factory” high schools fell by 13 percent – from 2,007 in 2002 to 1,746 in 2008. While these schools represent a small fraction of all public high schools in America, they account for about half of all high school dropouts each year. Experts say targeting these high schools for improvement is a critical part of turning around the nation’s dropout rate.

The state of Tennessee and New York City led the nation by boosting graduation rates 15 percent and 10 percent, respectively.

Just as Secretary of State George C. Marshall launched a plan to rebuild Europe after World War II, we must rebuild our broken school system. We are launching a “Civic Marshall Plan,” comprising policymakers, educators, business leaders, community allies, parents and students to address the dropout epidemic by focusing on the dropout factory high schools and their feeder elementary and middle schools. In tune with the call from President Obama and U.S. Secretary of Education Arne Duncan earlier this year to increase the U.S. graduation rate to 90 percent by 2020, we are working to mobilize Americans to quicken the pace. To reach these national goals, the graduation rate must rise by an average of 1.5 percentage points per year over the next decade. The Civic Marshall Plan outlines the benchmarks to ensure the attainment of those goals, and focuses on the strategic deployment of human resources to help school districts and states accelerate improvement.

Please, please read the report [.pdf]. There is little hope for improvement in any and all aspects of life in this land without leadership from an educated citizenry.

The creeps marching at the front of rightwing mobs will badmouth General Powell, whine about the cost of decent schooling – but, then, they would do so, regardless of the conclusions and methods endorsed by this work.

For a nation that once was at the forefront of freedom to learn we have come long way down towards incompetence. It’s been 45 years or more since first I bumped into the decline and included the struggle for better education into the panoply of civil rights and needs worth fighting for. Little enough has been accomplished.

Time to get off your rusty dusties, folks.

The number of young people dropping out of high school has been slashed in half in the last 20 years, according to new data from Statistics Canada.

The data also looked at the effect of the economic downturn in 2008-09, when nearly one out of every four dropouts in the labour market was unable to find a job. Among those who did find work, their earnings were less than for those with a high school diploma.

British Columbia, at 6.2 per cent, has the fewest number of young people without a high school diploma.

Golly gee, folks. How do those dropout rates from the GWN look compared to your own community, your state?

Think we should take a look at the hows and whys of what goes on in Canadian education – or leave it all in the hands of Congress and our state legislatures?

A groundswell of parent opposition to President Barack Obama’s speech next week to students on the importance of education has forced many North Texas school districts to question whether to air it live in classrooms.

By midday, local school districts say, they were inundated with hundreds of phone calls from parents urging them to not show Obama’s speech at school.

Cody Cunningham of the McKinney ISD said: “We rarely hear of parents pulling children out of history or government classes where they’re studying the politics or historical significance of a previous president.”