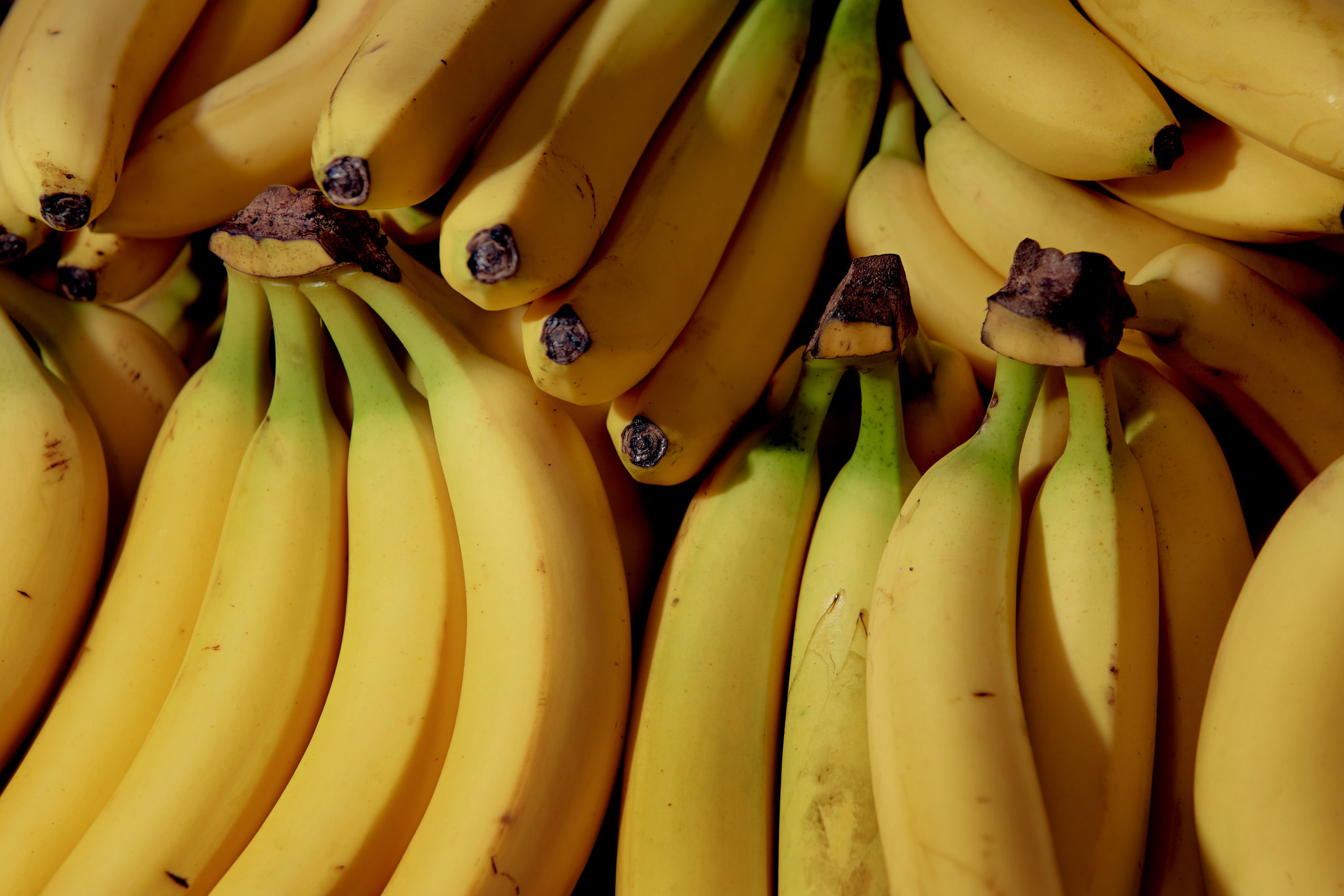 ❝ On a hot day in June, the Hermann Hesse slipped into New York Harbor and headed for the Red Hook Container Terminal in Brooklyn. The 550-foot container ship, flying the Liberian flag, had come some 3,000 miles from Ecuador. It had gone through the Panama Canal, picked up cargo in the Caribbean and weathered a few squalls.

Its arrival in Brooklyn was only the beginning for the bananas on board.

❝ Every week, a ship like this one brings 40 container loads of bananas — or about four million — to the Red Hook terminal, a fifth of the 20 million bananas distributed around New York City each week.

❝ When bananas arrive in New York, they begin a second journey, traveling in a large loop around the city. They may be handled by customs officials in Brooklyn, blasted with a ripening gas in New Jersey, haggled over at an enormous produce market in the Bronx and finally taken in an unmarked truck, at night, to a fruit stand near you…

❝ In most of the country, the unseen, nocturnal business of ripening and distributing bananas is performed by grocery chains like Safeway. In New York, though things may be headed in that direction, much of the work still falls to local banana purveyors. They can trace their roots back to Antonio Cuneo, an Italian immigrant who cornered the market in the late 19th century and became known as the Banana King.

Fascinating article for all the reasons good journalism can be, should be. Not that there isn’t a place for imaginary tales. Even outside political lies, self-agrandizement. But, a straightforward piece of reporting like this – one that wanders off here and there to explain the nooks and crannies that adhere to all the economic and cultural processes of a topic essential to daily life – is a boon. A credit to the historical roots of journalism.

❝ We may be lucky enough not to think about it in much of the United States, but worldwide there are tens of millions of children with stunted growth. Most of those kids are impoverished and often live in areas where access to nutritious food is limited. The World Health Organization has tried to ameliorate this problem by supplying fortified food products to underserved areas. The trouble is that those products are fairly expensive—potentially too expensive for poor families to afford — and distribution may not even reach more remote areas of the world. That’s where eggs come in.

❝ Eggs are cheap. They’re relatively easy to come by in many low-income areas, because people in those parts of the world often raise chickens and other poultry. They’re also high in protein, vitamin B12, riboflavin, and choline, plus they have significant amounts of a ton of other vitamins and minerals. And for a little baby, they can offer over 50 percent of critical daily nutrients. Eggs are an incredible, edible supplement to an impoverished kid’s diet.

❝ So a team of public health researchers from all over the U.S. and Ecuador decided to see just how much of an impact an egg a day could have. They just published their results…in the journal Pediatrics. The group traveled to a poor province in Ecuador, gathered up mother-infant pairs, and split them into two groups. One group gave their babies (aged six to nine months) an egg each day, while the other group gave no eggs. Researchers showed up at their houses to provide the eggs every week and used that visit to gather information about how the babies were doing. They took their weight and height, plus asked about any other medical problems the infants might be having. At the end of six months, they found the kids who ate eggs were significantly taller and larger. An eggy diet appeared to reduce stunting by 47 percent, and babies fed on the incredible edibles were 74 percent less likely to be underweight.

In March of last year, California-based oil giant Chevron hailed a sweeping victory in a two-decade long legal battle in the Ecuadorean Amazon. A New York federal judge, Lewis Kaplan, ruled that a $9.5 billion Lago Agrio judgment leveled against the company by the small Andean country’s highest court, was obtained by way of fraud and coercion.

In his decision, based on violations of the Racketeer Influenced and Corrupt Organizations (RICO) Act, the judge found that the plaintiffs’ lawyer, Steven Donziger, committed mail fraud, engaged in coercion, and paid bribes in order to win judgment against Texaco, which Chevron brought in 2001.

The case largely hung on Chevron’s star witness, Alberto Guerra, a former Ecuadorean judge who has admitted to receiving substantial amounts of money and other benefits to cooperate with Chevron. In New York, Guerra testified that he had struck a deal between the plaintiffs and the presiding judge, Nicolas Zambrano: Guerra would ghostwrite the verdict, Zambrano would sign it, and the two would share an alleged $500,000 in kickbacks from the plaintiffs.

In the RICO case ruling, Judge Kaplan stated that the “evidence leads to one conclusion: Guerra told the truth regarding the bribe and the essential fact as to who wrote the Judgment.”

But in testimony given before the international tribunal, released today by the government of Ecuador and provided to VICE News in advance, Guerra has now admitted that there is no evidence to corroborate allegations of a bribe or a ghostwritten judgment, and that large parts of his sworn testimony, used by Kaplan in the RICO case to block enforcement of the ruling against Chevron, were exaggerated and, in other cases, simply not true.

For those who have followed the case closely, including the environmental group Amazon Watch, Guerra’s admissions could amount to “game over” for Chevron, whose star witness has admitted to lying under oath and who has produced no evidence of the allegations that Chevron used to discredit the Ecuadorean ruling.

RTFA for a long, corrupt tale of a crew of scumbags. From pollution to depredation, perjury to bribery, Chevron hasn’t left out too many criminal acts.

Looks like the anti-Soy brigade has their own police force in Ecuador. 🙂

A Minneapolis woman has been fined after tainted guinea pig meat serving at her market resulted in a mass salmonella outbreak, health officials said.

The Minnesota Department of Health issued a $1,000 citation Oct. 1 to Nieves Riera, owner of New York Plaza Produce. the citation says Riera obtained the guinea pigs and pork from sellers that aren’t approved for wholesale, and that Riera slaughtered the guinea pigs in the back of her shop in August prior to an Ecuadorian Independence Festival, creating a health hazard.

The Tungurahua volcano spews ash and rocks during an eruption in Banos, about 130 km southeast of Quito, Ecuador.

Wife, hubby – and some dead singer

A father of four who faked his own death to claim more than £850,000 in insurance was caught when a friend attempted to use his HMV staff discount card to buy an Elvis CD, a court heard.

Hugo Jose Sanchez, 57, who worked as a web designer for the music retailer, orchestrated an elaborate plot involving his wife Sophie to embezzle a fortune and start a new life in Central America…

Oxford Crown Court heard that Sanchez was working as a web designer for HMV and living in Farnham, Surrey, when he came up with his plan in 2003.

Over the following year he took out seven separate credit cards and built up large debts, before applying for a £500,000 life insurance policy. He also had loans with payment protection that would be paid in full in the event of his death…

Sanchez took out another series of loans before flying to Ecuador alone. In 2005 his wife informed the authorities that her husband had died and his remains had been cremated. On production of his death certificate she collected large sums from the insurers before returning to Central America. She also received a death benefit payment of £112,000 from HMV and began to receive pension payments.

The couple then moved to Sydney, but the authorities had already uncovered their plot due to an attempt by a friend of Sanchez, Malcolm Jackson, to use the HMV staff discount card. Simon Heptonstall, prosecuting said: “This scheme began to unravel with a simple CD purchase. Mr Sanchez had given his staff discount card to a good friend, having said it had been approved by HMV.”

Mr Jackson was arrested and tried to ring his friend from the police station. Sanchez hung up but inquiries uncovered the fraud.

Har! That some crooks have sufficient ego problems they must bring their friends in on the fraud – and offer stupid largesse like giving someone a charge card – is almost beyond belief.

Police in Spain seized 162 kilos (356 pounds) of cocaine hidden inside plastic bananas that had been concealed in a 20-tonne shipment of real fruit from Ecuador.

“The imitations with the drugs, which were very similar to real bananas, were hidden amongst a shipment of real fruit,” it said in a statement.

The cocaine was wrapped in clear plastic sheets inside the fake green bananas, pictures released by police showed.

Four people were arrested in the operation surrounding the shipment which arrived at the Mediterranean port of Algeciras from Guayaquil, the largest and the most populous city in Ecuador. Police believe one of the four arrested is the leader of the ring who was responsible for maintaining contacts with the Colombian drug cartels that supplied the narcotics.

“These contacts led him to travel to the interior of the Colombian jungle to personally supervise the shipment of the cocaine and inspect its quality,” the statement said.

No one inspected the quality of his brains. Though, plastic green bananas is a pretty good stunt.