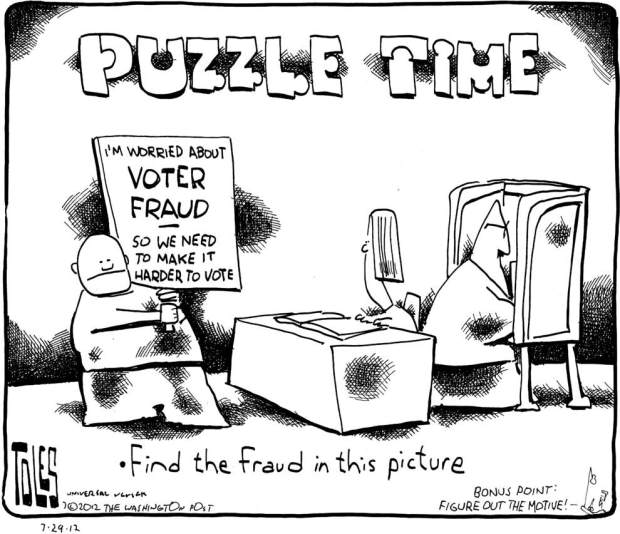 Steven Curtis, 57, who served as state GOP boss from 1997 until 1999, is charged with one felony count of forgery and one misdemeanor count of tampering with a mail-in ballot, according to a criminal complaint filed in Weld County District Court.

❝ The case stems from an inquiry lodged with the Weld County Clerk and Recorder’s Office by Curtis’s former spouse, Kelly Ireland, who contacted the agency in October to check on the status of her voter registration after the couple split.

Ireland was informed then that a signed mail-in ballot bearing her name and voter information had already been submitted, according to Carly Koppes, an elected Republican who serves as the county clerk.

“At that point, my office researched the situation further, and the signature was questionable, so we then contacted the District Attorney’s Office to start an investigation,” Koppes told Reuters.

❝ If convicted, Curtis faces a maximum three years in prison for forgery and up to 18 months in jail and a $5,000 fine for ballot-tampering, said Tyler Hill, a spokesman for the district attorney.

Curtis spoke about election tampering in a segment titled “Voter Fraud and Other Democratic Misbehaviors” on his Oct. 6, 2016 broadcast.

“It seems to me, and correct me if I’m wrong, but virtually every case of voter fraud I can remember in my lifetime was committed by Democrats,” Curtis said…

The Republican Party really should check and see if anyone holds the trademark for hypocrisy. They should register it as their own. Modern history bears out their ownership.

A California woman was unharmed after allegedly being kidnapped by her ex-husband and forced to undergo an exorcism, authorities said.

Jose Magana-Farias, 47, and his son, Victor Farias, 20, were locked up Tuesday in Stockton on suspicion of kidnapping and false imprisonment after they allegedly drove off with the unidentified woman from a Walmart parking lot in Stockton Saturday.

San Joaquin County Sheriff’s Lt. Mike Jones told KCRA-TV in Sacramento that Magana-Farias and his son said the woman had undergone some major and worrisome personality changes that led them to believe she had been possessed by demons.

The woman reportedly willingly got into the car driven by the two men, who then picked up two priests and drove to another location where a sacred oil was applied and a religious ritual was performed, the arrest report said.

Jones told KCRA the woman was not harmed during the ritual. The priests were not charged.

Hey, the priests are as looney as the ex-hubbie and his son. Shouldn’t they be charged, too.

Volusia County sheriff’s deputies have located the third suspect in connection with an attempted homicide that happened Tuesday.

Hobart was wanted by authorities after they said she was involved in the beating and dragging of 54-year-old Robert Hall.

Investigators said Morris still lives with Hall and learned he had another woman over while she was away.

Morris, Anderson and Hall were all drinking together when the duo suddenly attacked the victim…

Deputies said Morris and Anderson beat up Hall, waved a gun around and used a stun gun on him. Then tied him up and dragged him from the back of a truck for about a half mile, according to authorities.

Hall told authorities that at one point Morris and Anderson stopped the truck and were overheard saying that they were going to drive and find a hole to bury him in.

Maybe you really are safer doing your drinking in some sleazy bar instead of at home with friends – and ex-wives.

Freshman U.S. Rep. Joe Walsh, a tax-bashing Tea Party champion who sharply lectures President Barack Obama and other Democrats on fiscal responsibility, owes more than $100,000 in child support to his ex-wife and three children, according to documents his ex-wife filed in their divorce case in December.

“I won’t place one more dollar of debt upon the backs of my kids and grandkids unless we structurally reform the way this town spends money!” Walsh says directly into the camera in his viral video lecturing Obama on the need to get the nation’s finances in order…

An intense, silver-haired firebrand, Walsh, 49, has taken cable TV by storm in recent weeks, becoming the unofficial spokesman for the “No compromise” faction of the Republican majority in the U.S. House — refusing to consider any debt crisis solution that includes raising taxes on the wealthy.

Walsh admits he is not wealthy. Some of his financial problems — including losing his Evanston condo to foreclosure — were documented before his out-of-nowhere victory last fall in the 8th Congressional District in Chicago’s north and northwest suburbs…

Before getting elected, he had told Laura Walsh that because he was out of work or between jobs, he could not make child support payments. So she was surprised to read in his congressional campaign disclosures that he was earning enough money to loan his campaign $35,000.

“Joe personally loaned his campaign $35,000, which, given that he failed to make any child support payments to Laura because he ‘had no money’ is surprising,” Laura Walsh’s attorneys wrote in a motion filed in December seeking $117,437 in back child support and interest. “Joe has paid himself back at least $14,200 for the loans he gave himself…”

Walsh lives with his new wife and children in McHenry. He has not paid any of the $117,437 yet, Laura Walsh’s attorney, Jack Coladarci, said Wednesday.

My lifetime political dicho still stands: Republicans would have invented hypocrisy if Christians hadn’t beaten them to it.