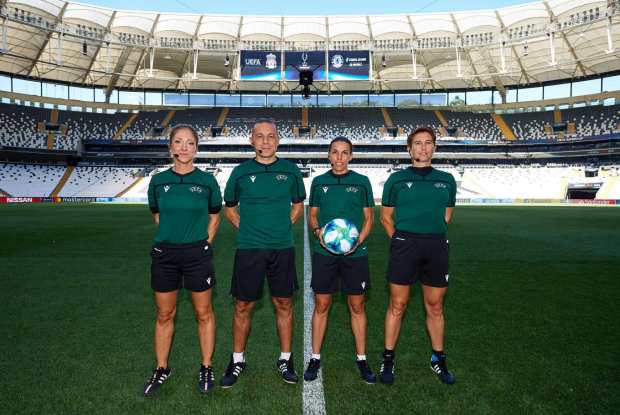 ❝ A team of female officials taking charge of the European Super Cup will change the way women are perceived in the game…There are few arenas in football that provide the visual challenge to the way society views female involvement in “a man’s game” more than the sight of a female referee.

Here’s the tale of the match from the GUARDIAN. I watched it live on the telly and it was a fair, hard-fought match, evenly-matched and well played. And very well officiated. Another step into a better future.

Oh yeah…double overtime and PKs down to the last kick to resolve the score.

The grand final of this year’s Electrolux Design Lab 2011 competition is fast approaching. The field has been reduced to the last eight solutions for compact living and video presentations of the concept designs produced.

The young designers will get their chance to pitch for victory in front of the judges on September 7 in London, but before that Electrolux has opened up the ballot box for the People’s Choice – a chance to reward your favorite design with some of the limelight…

This year’s finalists will present their design to the Design Lab’s panel of judges at the Business Design Centre, London on September 7. Entries will be judged on intuitive design, innovation and consumer insight. The winner will receive Euros 5,000 and get to spend six months as a paid intern at one of the company’s global design centers. Runners up will walk away with Euros 3,000 and Euros 2,000 for second and third place respectively. One of the final eight will also be crowned the public’s favorite with the People’s Choice Award.

Check out who you feel is most deserving, have a look at the concept presentation videos. And to vote for your People’s Choice champion, head over to the poll page on Facebook before 14:00 CET, September 7.

They picked a great time to win for the first time against the United States.

Mexico won the Under-17 World Cup final on Sunday, defeating Uruguay 2-0 with goals from Antonio Briseno in the 31st minute and Giovani Casillas in second-half stoppage time.

The victory thrilled a boisterous crowd at Azteca Stadium in Mexico, a country getting used to football success. Two weeks ago the Mexico senior team won the Gold Cup, the regional championship, defeating the United States 4-2 in the final in California…

Briseno scored chipping in a short shot from a header into the area, beating keeper Jonathan Cubero. Casillas got his two minutes into stoppage time, scoring on a counterattack as Uruguay pressed for an equalizer.

Uruguay had its chances with Elbio Alvarez hitting the crossbar.

It was a stunning end for Uruguay, which beat Canada 3-0 in the tournament opener for both teams.

It was a great match to watch live – as much as I got to see. Our less-than-stellar electric company here in New Mexico presented us with 6 power failures in the last 20 hours. Two of them during the match. 😦

Man of the Match, Ben Foster

You can’t be happy when your team loses; but, the United States getting to play in a Final ending with a close defeat by Brazil in the Confederations Cup, 2-3 in South Africa is something that would be unheard of a few years ago.

The RSA team played better than anyone thought they could. The USA team did as well – and good enough to make the final. Both of these teams surprised the experts. There are national teams in many football powerhouse nations who didn’t even get into the tourney. Their pundits will have suitable excuses to go along with unique answers as to how and why the US team made it to the end. I won’t elaborate.

Tim Howard was my man of the tournament all along. I said so in earlier posts.

Congratulations, Tim. And keep the Blue side of Liverpool on top next season.

It’s been six long months since we last saw the “Battlestar Galactica” crew and their new Cylon allies go from the giddy high of finally finding Earth to the pitch-black depression of discovering the planet is a nuclear wasteland.

Tonight at 10 EST on the SciFi network, the second half of the fourth and final season commences with a gripping premiere episode that offers up a few more shockers..

Tonight we pick up right where we left off, with the expedition of humans and Cylons surveying the bleak landscape of what they had hoped would be their new home. The planet is not only fried, but the ruins offer myth-shattering clues about the original inhabitants that sucker-punch the survivors…

The series has played deliberately as a modern allegory. The new question is uncomfortably timely: What do you do when you’ve put all your eggs in one basket and the bottom of the basket drops out? Given the show’s admirable history of exploring humanity’s darker corners, it’s no surprise that some characters lament the cracked shells while others try to salvage an omelet.

I’d take the allegory further; but – that’s me. The stupidity and cruelty of war. The reason behind struggling for a better life together instead of seeking domination over all that live and dies. The potential dangers from political abuse of the gifts of science.

It’s set to record automatically in Hi-Def on the DVR. Wouldn’t miss it for the world.

President George W. Bush took his last official Air Force One flight on Saturday to Virginia for a ceremony to place a warship named after his father into active duty.

The president’s helicopter, Marine One, landed on the flight deck and Bush emerged with his father, the former president, who was walking with a cane. Their wives followed.

For Bush, it was a day of his final flight on Air Force One, the presidential jet. He will fly to Texas after Obama’s inauguration most likely on the same jet but it will no longer be designated as Air Force One, which is reserved for a plane carrying the president.

BTW – Dumbo didn’t know it was his last flight on Air Force One until a journalist told him. 🙂