Last year, the Tesuque Pueblo tribe of New Mexico opened a new casino, moving out of a 75,000-square foot facility that they quickly realized could be repurposed as a studio facility.

That idea was solidified in the fall, when the Universal Pictures feature “News of the World,” starring Tom Hanks, filmed at the facility. And thus launched Camel Rock Studios, which lays claim as the first movie studio owned by a Native American tribe in the history of Hollywood.

“Casinos, inherently, if you take out all the games, are big empty spaces,” said Timothy Brown, president and CEO of the Pueblo of Tesuque Development Corporation. “So we had an events center that we did concerts in and large parties that was a big vacant space. Once we removed all the casino equipment and furniture from the casino area, that became another large vacant space, and then with any business we had an entire administrative area with cubicles and offices that became perfect for their offices to move in.”

Brown said the corporation is aiming to take advantage of a filming boom in New Mexico, spurred in part by the state’s economic incentives. Perhaps best known recently for productions such as “Breaking Bad,” New Mexico has seen filming rise to the point that Netflix has even made Albuquerque its U.S. production hub. 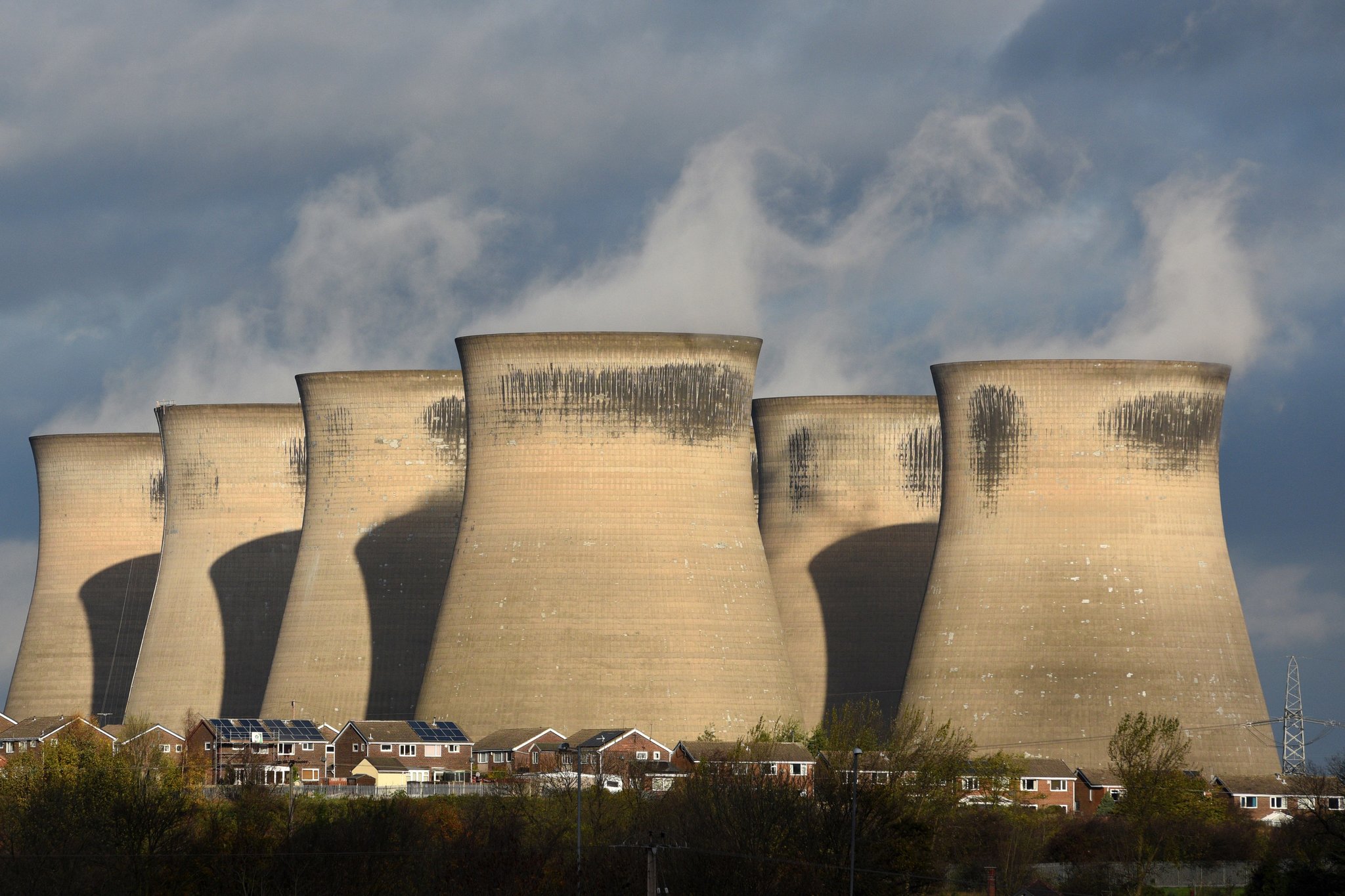 ❝ Last Friday was the first full day since the height of the Industrial Revolution that Britain did not burn coal to generate electricity, a development that officials and climate change activists celebrated as a watershed moment.

The accomplishment became official just before 11 p.m., when the 24-hour period ended…

❝ For many living in the mining towns up and down the country, it was not just the backbone of the economy but a way of life. But the industry has been in decline for some time. The last deep coal mine closed in December 2015, though open cast mining has continued.

❝ Coal-fired power generation contributes heavily to climate change; burning coal produces twice as much carbon dioxide as burning natural gas. Reducing the world’s reliance on coal and increasing the use of renewable energy sources like solar and wind power have long been part of proposals to prevent the worst consequences of climate change.

Now on a path to phase out coal-fired power generation altogether by 2025, Britain, also the home of the first steam engine, is currently closing coal plants and stepping up generation from cleaner natural gas and renewables, like wind and solar.

❝ Some countries have already left coal behind in power generation. In Switzerland, Belgium and Norway, “every day is a coal-free day,” Carlos Fernández Alvarez, a coal analyst at the International Energy Agency in Paris, pointed out.

❝ In the United States, where coal still accounts for about 30 percent of power generation, Vermont and Idaho are the only coal-free states, and California is close behind…

❝ Meanwhile, in the London Museum of Water & Steam, which has a heritage collection of coal-fired steam engines and railway engines, the operations manager, Edward Fagan, was planning for a future exhibition.

“Coal-fired power generation is very fast becoming a heritage item,” Mr. Fagan said. “One day we’ll have to add a power station to our collection.”

We can contribute wax replicas of the Koch Bros – exemplars of corporate barons trying to stop time, halt progress, save their death-filled fortunes. Oh, perhaps one of their pimps like Donald Trump or Mitch McConnell. 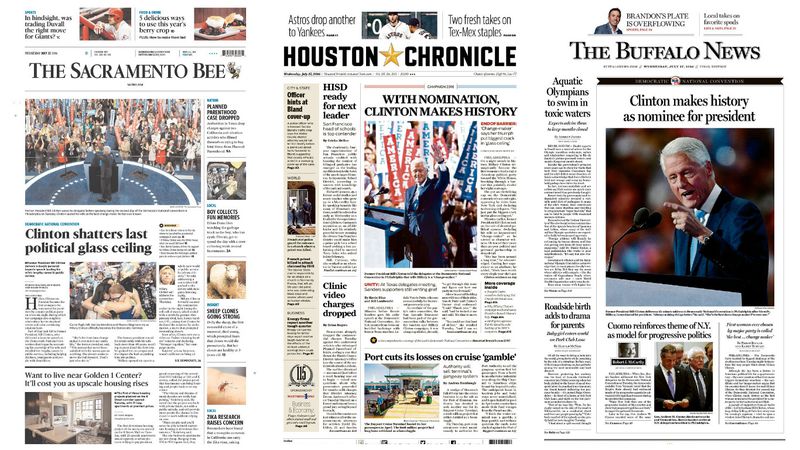 ❝ Fusion’s Kelsey McKinney noticed something important about today’s newspapers that heralded the historic moment of a woman winning a presidential nomination. A lot of them used a picture not of Hillary — but her husband.

❝ Of course it’s true that Hillary Clinton only addressed the DNC briefly through a video Tuesday night. And, having worked in a number of newsrooms, my guess is the editors at these papers wanted to grab a newsy photo from something that happened at the Democratic National Convention last night. That newsy photo ended up, in a lot of cases, to be of Bill Clinton…

❝ Nonetheless, Clinton did something remarkable last night — she became the first woman to win a major political party’s presidential nomination. Certainly that should be enough of an accomplishment to get her face on the front page of more of the country’s daily newspapers. Apparently, it isn’t.

The telling conclusion for me — that not only didn’t these newspapers notice their brains were about a century out-of-date; but, that millions of Americans, mostly male, didn’t notice it, either.

And, then, there likely are thousands of Republicans who wonder what the fuss is all about?

❝ After a flight time of 71 hours and 8 minutes, Solar Impulse 2, piloted by Bertrand Piccard, became the first solar powered airplane to successfully cross the Atlantic Ocean. The plane took off from New York and landed in Seville, Spain.

The flight across the Atlantic was much shorter than last year’s epic 117 hour trip that pilot André Borschberg made last year across the Pacific in Solar Impulse 2. Borschberg and Piccard have been alternating piloting duties throughout the course of the round-the-world journey, which started last year in Abu Dhabi.

❝ The plane likely has about two more legs to go before their journey is over–from Spain to Northern Africa, and then, at long last, back to Abu Dhabi.

Bravo! Like all early adventures in new technology it’s a small start and a long fulfilling journey.

❝ Never mind that San Francisco is known for waves of fog rolling in from the bay. This week, it became the first major city in the United States to mandate solar panels on new buildings with fewer than 10 floors.

❝ The Better Roofs Ordinance, unanimously approved by the city’s Board of Supervisors on Tuesday, builds off of existing California law that requires 15 percent of new rooftops to be “solar ready.” Now, those solar-ready roofs will have to include functioning solar panels.

❝ The ordinance could have an immediate impact on more than 200 building projects currently in the works. This will “avoid over 26,000 metric tons of carbon dioxide emissions per year” according to the Department of the Environment, reports the San Francisco Examiner, enough to power roughly 2,500 homes annually.

It does help to be in a state with national leadership in almost every aspect of improving the environment. Certainly, part of that is a reflection of government working to cure problems of their own creation. Like way too many cars and too little public transit. A special part of California’s history.

❝ A captive breeding program that at one time included every living California condor has passed a key milestone in helping North America’s largest bird return to the wild.

For the first time in decades, more condors hatched and fledged in the wild last year than adult wild condors died, said officials with the U.S. Fish and Wildlife Service…

❝ Fourteen young condors took flight compared with 12 that died. Officials say it’s a small difference but a big step since the last 22 wild condors were captured in the 1980s to start the breeding program that releases offspring into the wild.

“That’s an indication that the program is succeeding,” said Eric Davis, the Wildlife Service’s coordinator for the California condor program. “We hope that wild birds start producing wild chicks, and that is what is happening more and more…”

❝ The captive breeding program continues with the Peregrine Fund’s World Center for Birds of Prey near Boise being the top egg producer, with six eggs laid this spring and nine more expected…

Davis said about 20 to 40 condors, typically less than 2 years old, are released into the wild each year. They can live for about 60 years.

Majestic birds. I’ve seen one in the wild. Once.

Click to enlarge — Olmert on the left — Moti Milrod

❝ Israel’s former Prime Minister Ehud Olmert started serving a 19-month prison sentence for bribery and obstruction of justice on Monday, becoming the first Israeli premier to be imprisoned and capping a years-long legal saga that forced him to resign in 2009…

Wouldn’t it be nice if we could say this about George W Bush? Trouble is – even the anti-government Tea Party-types won’t join the campaign. Ideology still overrules any sense of fighting for justice.

❝Reading in the current age of the Internet has led to some subtle modifications in how we read. I suspect we are consuming so many words, or at least way more than normal and as a result we have become “skimmers” and letting our brain to fill in the gaps. I was reminded of our changing behavior by a marketing email from Le Labo Fragrances. Thought you folks might get a kick out of it!