Analyzing the number of views on TikTok using hashtags mentioning each vehicle brand and model, research by Confused.com revealed the most popular car models and brands on the app. The Ford Maverick topped the list, with over 10.9 billion views and a range of media and consumer content. Scroll through #FordMaverick on the app and you’ll find thousands of videos with owners showing off their truck—but none from Ford itself. The official Ford TikTok page is lightly populated and shows no Maverick content, cementing the truck’s popularity as relatively organic.

My wife’s Maverick is Cactus Gray. The truck’s name is Moxie.

Open it up full screen and let it rock’n roll

If there’s one thing truck owners love doing, it’s towing other people’s stuck cars out of mud, ditches, and any predicament that might require a tow strap or a winch.

Ford trucks — with the company’s “Built Ford Tough” motto and slew of advertisements about power — are no exception. Now, there’s a way for electric Ford-150 Lightning drivers to help others in need.

On Sunday, one Lightning owner shared a photo — spotted by The Verge — of a new Tesla-compatible charging adapter that Lightning owners can use to charge the competitor’s battery.

“Here you go! Lightning to the rescue. We can help all those poor dead Teslas,” the owner wrote in a Lightning forum.

Manufacturers are stacking up unfinished goods on factory floors and parking incomplete vehicles in airport parking lots while waiting for missing parts, made scarce by supply-chain problems…

Companies determined to keep factories open are trying to work around shortages by producing what they can, at the same time rising customer demand has cleaned out store shelves, dealer showrooms and distribution centers. As a result, manufacturers are amassing big inventories of unsold or incomplete products such as truck wheels and farm tractors. Companies that are used to filling orders quickly now have bulging backlogs of orders, waiting for scarce parts or green lights from customers willing to take deliveries.

AFAIK, my wife’s soon-to-be Maverick Pickup ain’t out there in that field of Fords. They just didn’t get it made, yet. 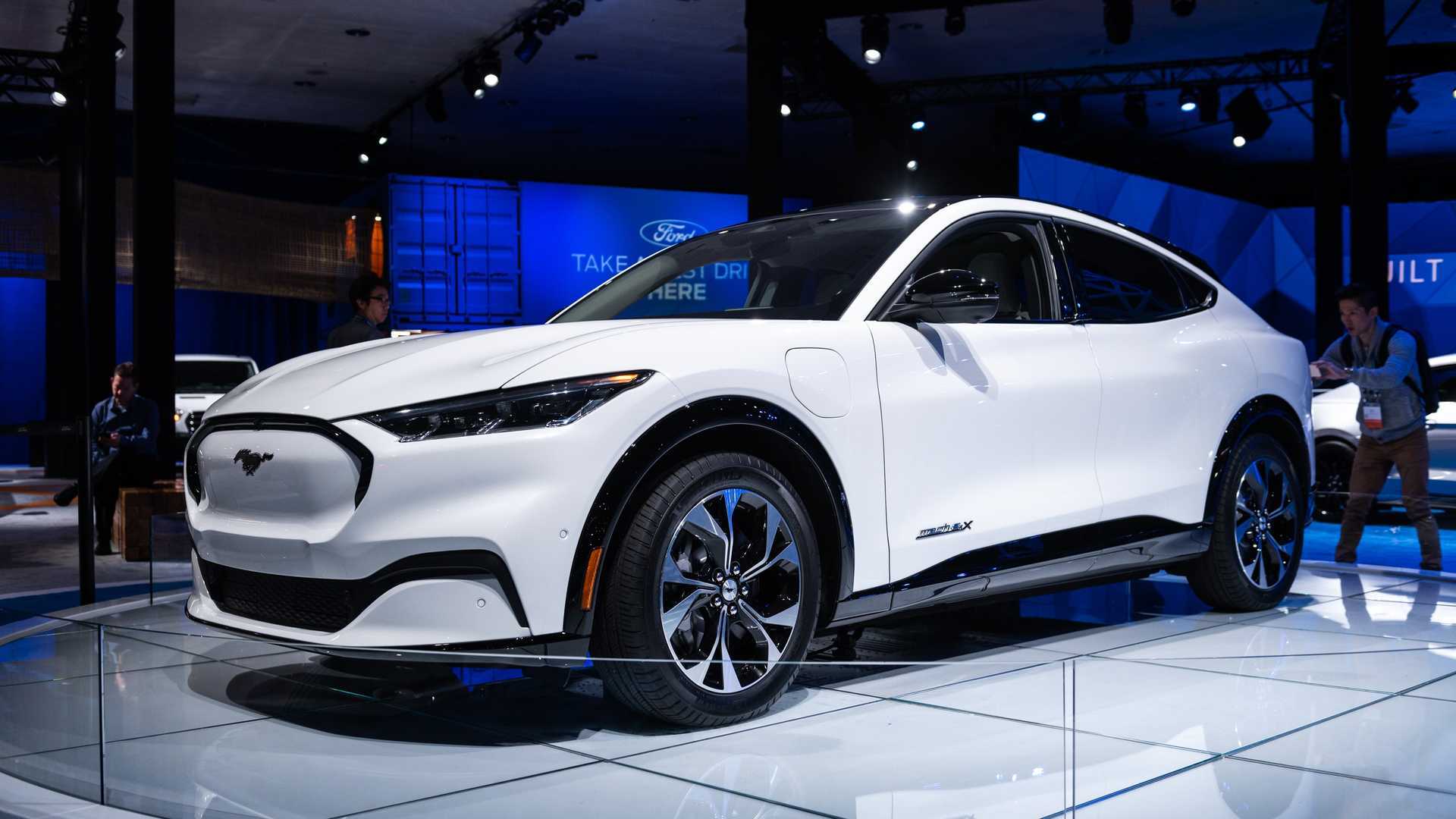 …and if there’s anyone consulting/advising investors with deserved reputation for good sense, honest analysis and understanding of political economy moving a whole society forward, it’s Barry Ritholtz. Not the first this proposal appeared on TWITTER; but, Barry makes a brief, concise argument for Tesla buying Ford.

Even though just a tad over 2 years ago, folks were suggesting the reverse deal.

[An amateur] researcher, who described himself as a “Tesla tinkerer that’s curious about how things work,” recently gained access to 13 Tesla MCUs — short for media control units — that were removed from electric vehicles during repairs and refurbishments. Each one of the devices stored a trove of sensitive information despite being retired. Examples included phone books from connected cell phones, call logs containing hundreds of entries, recent calendar entries, Spotify and W-Fi passwords stored in plaintext, locations for home, work, and all places navigated to, and session cookies that allowed access to Netflix and YouTube (and attached Gmail accounts)…

“It looks like some service center employees sell intact units on the side instead of returning them…the researcher said in an interview. “I know some people running salvage yards that say that’s one source of units they have for sale.”…

[His] discovery reveals a risk posed not just to Tesla owners but drivers of virtually any vehicle that has onboard devices that store personal data or provide remote tracking. A man who rented Ford vehicles from Enterprise Rent-a-Car reported having the ability to remotely start, stop, lock, and unlock the vehicles long after he returned them not just once, but a second time four months after the first. As is the case with Tesla MCUs that make it back onto the market, the failure of rental companies to mandate that employees fully wipe infotainment systems of all previous customers’ data represents a safety and privacy risk that could easily be avoided.

I know you can’t selectively destroy recording systems in a car you’re selling or trading-in; but, at a minimum you should do a factory reset. I’m not a fanatic about privacy (yet); but, I see no reason to skip utilizing the procedures built-in to maintain some level of security.

❝ Tesla’s…launch of its futuristic Cybertruck pickup suffered a setback when its “armored glass” windows shattered, but it was the overall look of the electric vehicle that worried Wall Street on Friday, driving the automaker’s shares down 6%.

In the much-anticipated unveiling to cheering fans late on Thursday, Tesla boss Elon Musk had taken aim at the design, power and durability of mainstream trucks, only to be shaken when his boast about his new vehicle’s windows backfired…

❝ Some Wall Street analysts praised the launch on Friday, but others doubted the futuristic design’s mass appeal…“Musk has been enthusiastic about his Blade Runner-inspired design for months, but we were still surprised how futuristic he went with this one and believe it may shatter his dreams,” Cowen analysts wrote…

“While we are pleased to see Tesla enter the most profitable segment of the North American passenger car market, we do not see this vehicle in its current form being a success.”

The comparison to Blade Runner is apt, appropriately futuristic. Our household liked Blade Runner for more than the cultural politics. Same goes for the Tesla pickup. Quoting “car guys” who hate the look is like Road & Track mag’s hatred of modern racing-level automatic transmissions. Which keep on winning all the important races on traditional courses.

The comparison with Fords is also appropriate. They usually lead the pack though Rams received the same rap when introduced in 1994…and ended up often challenging and beating Ford sales. My ’94 Ram has had only 1 major repair in 25 years – tranny replacement – and the speedo quit several years ago at 211,000 miles.

Most interesting engineering comment came from an engineer with specialized glass qualifications…who learned Tesla bounced the 1kg steel ball off the windows 5 times the day before. He felt they never considered cumulative microfractures and should have done the demo with unimpacted glass.

❝ The Bargersville, Indiana, Police Department is updating its fleet to Tesla Model 3s after they figured out that they will save a lot of money on gas, and that the Tesla Model 3s don’t compromise performance compared to the Dodge Chargers…

❝ As for cost, Model 3 is the clear winner. The Standard Range Plus version that they bought is a little more expensive at ~$41,000, but they expect gas savings of about $6,000 per year, which means that the Model 3 will almost pay for itself over its lifetime (they expect six years as a police vehicle).

And here’s another one of those changes resulting from our recent Great Recession. People realized they didn’t need a new car as often as previous. Lots of folks bought new cars as things got better into the Obama years. Then slooowed way down below new purchase cycles of earlier generations.

❝ Ford Motor, Volkswagen Group, BMW Group and Daimler today said they plan to set up charging stations for electric vehicles along major highways in Europe. The move will be an important step toward facilitating the mass-market adoption of EVs, the companies said in a joint statement.

❝ The companies have signed an initial agreement to create the charging network in what they said is an “unprecedented collaboration.” The goal is to quickly build up a sizable number of stations in order to enable long-range travel for battery electric vehicle drivers.

The buildup is planned to start in 2017. An initial target of about 400 sites in Europe is planned. By 2020 the customers should have access to thousands of high-powered charging points…”The charging experience is expected to evolve to be as convenient as refueling at conventional gas stations,” the automakers said.

❝ The network will be based on Combined Charging System standard technology. The planned charging infrastructure expands the existing technical standard for AC and DC charging of electric vehicles to a higher level of DC fast-charging capacity with up to 350 kilowatts. EVs engineered to accept 350 kW of power will be able to recharge in a fraction of the time as today’s EVs.

Here it comes. The historic auto truism hasn’t changed. Just about every advance in the auto craft starts in Europe.