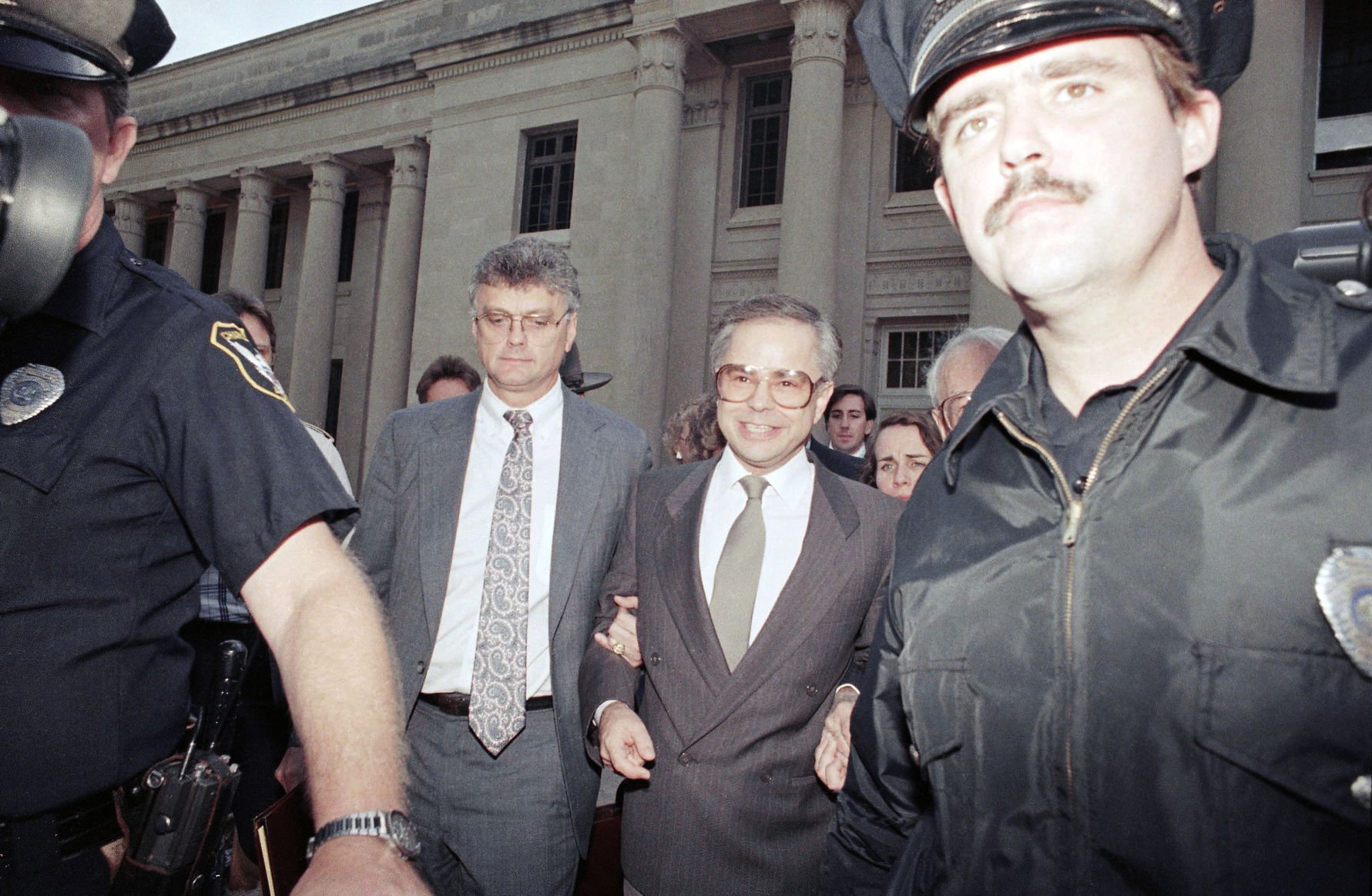 ❝ Controversial televangelist Jim Bakker has claimed that the Missouri town in which he is building a Christian community is equipped to survive the end of the world, and is selling survival gear, such as 6-packs of water bottles for $150.

❝ Bakker said on his program…that various prophets have predicted that if there is a major world disaster and humankind faces the end of the world, people in large cities are not going to be able to survive.

That is why for 15 years Bakker has been building his Morningside community in Blue Eye, Missouri, which will come with an amphitheater, houses for the residents, and a chapel that can be used for weddings.

❝ He also is advertising survival gear, such as a pack of six “extreme survival” water bottles being sold for $150. His website claims that the bottles are “designed using a combination of both Advanced and Radiological filters.”

Nothing much new in Bakker’s hustle. Whether you recall the history of his so-called ministry – or that of many peers. He ended up in the slammer for fraud, accused of rape. Mainly, he was guilty of being caught. Many of his breed simply keep stealing from true believers and never even get investigated. The Land of the Free includes the opportunity to be gobbled up by sharks cruising the Great American Ocean of Superstition.

❝ For a…prophetic vision of the future, you should read the complaint against Trump, his children and his foundation by New York State Attorney General Barbara Underwood…

Why prophetic? Because it’s likely a preface to the report or complaint that special counsel Robert Mueller will bring. The alleged crimes described by Underwood are not similar to those being investigated by Mueller. But the behavior is.

❝ U.S. history simply doesn’t offer a lot of reference points for a major-party political candidate who so casually subverts the law and sells out the nation’s highest values. How many Richard Nixons are there?

To believe the accusations that Trump colluded with Russia, laundered vast amounts of money and/or put American foreign policy on the auction block in return for the enrichment of his family requires an awkward leap of faith. You have to believe this leader is both profoundly corrupt — far more so than Nixon — and staggeringly sloppy — again more so than Nixon. 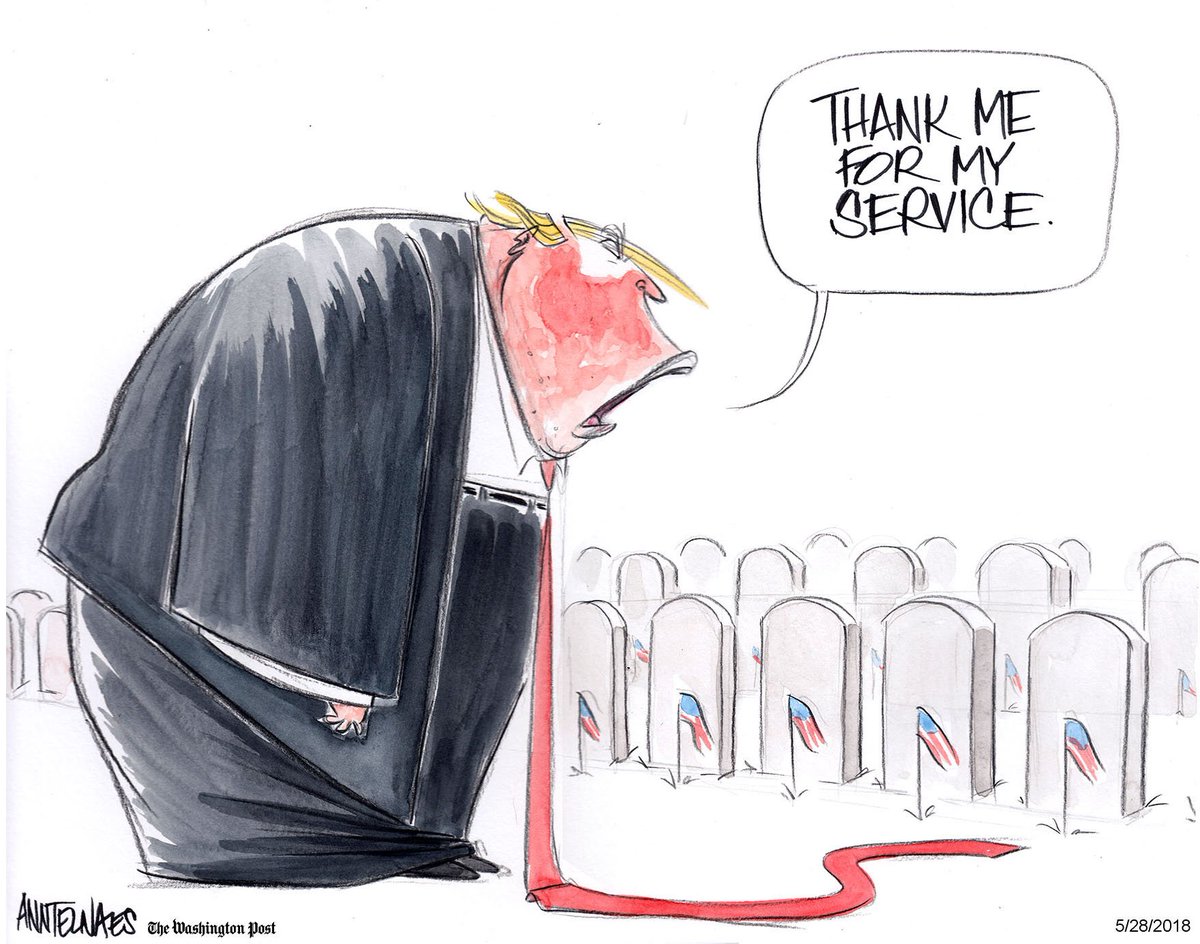 ON TWITTER: Donald J. Trump @realDonaldTrump 6:58 AM – May 28, 2018 “Happy Memorial Day! Those who died for our great country would be very happy and proud at how well our country is doing today. Best economy in decades, lowest unemployment numbers for Blacks and Hispanics EVER (& women in 18years), rebuilding our Military and so much more. Nice!”

Our fake president, the liar-in-chief, displays his phony self to a public which still includes a parcel of self-deluded sycophants.

❝ At $1 billion, it is likely to be among the largest fines in financial services history and already being considered at a historic level by analysts…

❝ Martin Shkreli, once dubbed “the most hated man in America,” is now a convicted felon.

Shkreli, notorious for raising the price of a potentially life-saving drug by 5,000 percent, was found guilty Friday of defrauding investors in two hedge funds and in Retrophin Inc., a pharmaceutical company he co-founded.

❝ He is now almost certain to go to prison. Shkreli faces as long as 20 years behind bars, although he’s likely to serve much less. U.S. District Judge Kiyo Matsumoto allowed him to return home and wished Shkreli well after the verdict was read. She said she would see him soon, though she hasn’t set a date for sentencing…

Shkreli was convicted of three of eight charges, including securities fraud. He was acquitted of fraud charges related to allegations that he looted Retrophin to pay off his hedge-fund investors. Sentencing guidelines take into consideration the size of losses, so the Retrophin allegations carried the potential for the most severe penalty.

❝ In the end, it was Shkreli’s lies to his investors that cost him his freedom, not his 2015 decision to jack up the price of an anti-parasitic drug. Prosecutors said Shkreli, 34, misled clients about the performance of his failing hedge funds, secretly used their money to start Retrophin, and then took $11 million from the drug-development company to repay them.

Shkreli played financial manipulation games almost as well as, say, a Congressman keeping his re-election fund after retiring. The operative word being “almost”. Plus, like like one of our politicians most notorious for his daily accumulation of lies, he never learned when to keep his mouth shut.

A decade after the mortgage debacle, the financial industry has embraced another type of subprime debt: auto loans. And, like last time, the risks are spreading as they’re bundled into securities for investors worldwide.

❝ Subprime car loans have been around for ages, and no one is suggesting they’ll unleash the next crisis. But since the Great Recession, business has exploded. In 2009, $2.5 billion of new subprime auto bonds were sold. In 2016, $26 billion were, topping average pre-crisis levels, according to Wells Fargo…

❝ Few things capture this phenomenon like the partnership between Fiat Chrysler Automobiles NV and Banco Santander SA. Since 2013, as U.S. car sales soared, the two have built one of the industry’s most powerful subprime machines.

Details of that relationship, pieced together from court documents, regulatory filings and interviews with industry insiders, lay bare some of the excesses of today’s subprime auto boom. Wall Street has rewarded lax lending standards that let people get loans without anyone verifying incomes or job histories. For instance, Santander recently vetted incomes on fewer than one out of every 10 loans packaged into $1 billion of bonds, according to Moody’s Investors Service. The largest portion were for Chrysler vehicles.

Some of their dealers, meantime, gamed the loan application process so low-income borrowers could drive off in new cars…

❝ Through it all, Wall Street’s appetite for high-yield investments has kept the loans — and the bonds — coming…Reid Bigland, Chrysler’s U.S. sales chief, said Santander has been a “good partner.”

Typically, you look to see which regulators have had staff cut by the sleaziest members of Congress. That’s where the money-grubbers most inclined to fraud are focused. Nowadays, with today’s version of the Republican Party in slim control of both houses of Congress – with the pimp-in-chief in the White House – you can be assured the beat goes on! 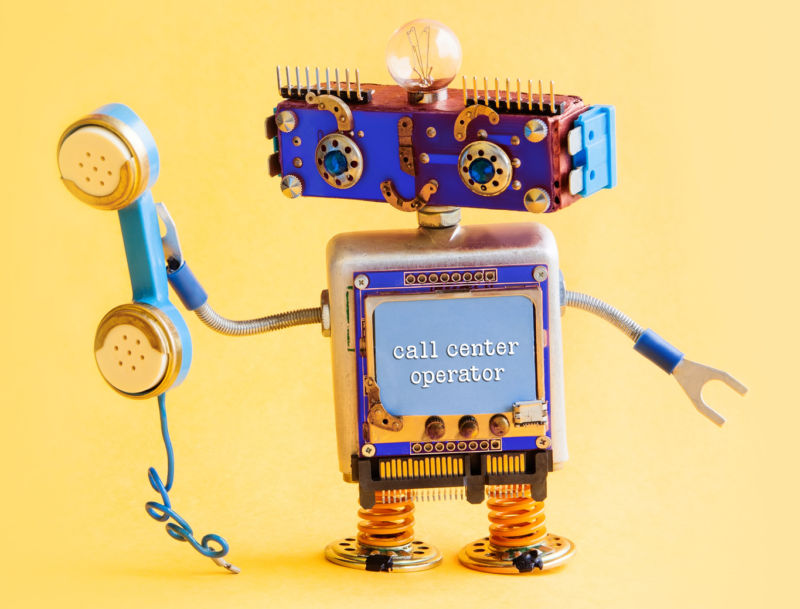 Adrian Abramovich tried to trick consumers into answering and listening to his advertising messages, the Federal Communications Commission said in a news release Thursday. The pace of calls works out to an average of more than 1 million per day…

Calls appeared to come from local numbers, but those who answered were prompted to “Press 1” to hear about vacation deals, according to the FCC. If they did, consumers were connected to call centers not affiliated with companies mentioned in messages, such as Expedia Inc., TripAdvisor Inc., Marriott International Inc. and Hilton Worldwide Holdings…

Consumers who did “press 1″…ultimately connected Americans to call centers in Mexico that usually attempted to fleece innocent consumers out of their hard-earned money by promising too-good-to-be-true vacation deals,” Adam Medros, a senior vice president at TripAdvisor, said in an emailed statement. The company said it worked closely with the FCC to investigate after its customers called to complain.

Like the headline says, THROW AWAY THE KEY – after you take back all the money he stole plus penalties.

❝ An investigative report…shows a former city of Gainesville employee, accused of stealing more than $93,000 from the city, spent some of it on a Brazilian butt lift.

The report found that former city staff specialist Natwaina Clark, 33, charged her city-issued credit card 136 times for roughly $61,000 in unauthorized charges, used her bosses’ cards at least 36 more times for an additional $31,000, and spent nearly $900 on a coworker’s card five times between November 2015 and March 2017.

❝ Documents attached to the report show Clark, who was hired in August 2015, funneled roughly $41,000 to her personal PayPal account, linked to her bank account, and that $8,500 of it went toward a Brazilian butt lift. The cosmetic surgery procedure uses fat from one part of the body to augment one’s buttocks…

Clark, whose salary was $33,500, was fired from the city March 21, while on a cruise-ship vacation, the report said. She was arrested March 28 and charged with larceny and scheme to defraud, both felonies…

❝ The city report found the city’s human resources department failed to properly execute the city’s employee background screening and didn’t advise the hiring department about concerns in Clark’s history, allowing her to be hired.

Har. Turns out the HR Department didn’t really do their homework about Clark being busted for similar crimes in another county. Didn’t tell folks in the department where she was hired of any concerns.