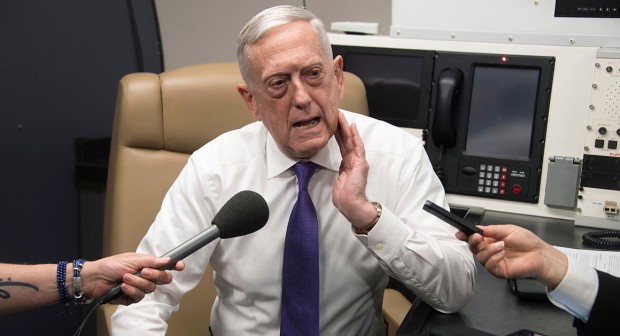 ❝ [We have] an increasingly adversarial relationship between Defense Secretary James Mattis’ Cabinet department and the reporters who cover it. Chief among the complaints, according to defense reporters who spoke to POLITICO, are declining access to Mattis and other military officials, as well as a sense that reporters are not receiving the information they need to keep the public informed about America’s military activities.

Mattis has not briefed reporters on-camera in the Pentagon since April, while his chief spokesperson, Dana White, has not done so since May.

❝ Kevin Baron, the executive editor of Defense One, said Trump’s simultaneous war on the press and hyperfocus on media have combined to fundamentally change interactions inside the Pentagon.

“It’s definitely like no time that I’ve ever seen, and this is my 10th year on the Pentagon beat,” he said. “We used to have the secretary of defense and the chairman of the joint chiefs side by side in briefing room at least once a month, and if we didn’t get once a month, we complained. We’re so far beyond the way things used to be, and it’s all because of Trump.”

“In the First Amendment the Founding Fathers gave the free press the protection it must have to fulfill its essential role in our democracy. The press was to serve the governed, not the governors. The Government’s power to censor the press was abolished so that the press would remain forever free to censure the Government. The press was protected so that it could bare the secrets of government and inform the people. Only a free and unrestrained press can effectively expose deception in government.” Hugo Black, Associate Justice of the Supreme Court of the United States, 1971. The Defense Department earlier this summer released a comprehensive manual outlining its interpretation of the law of war. The 1,176-page document, the first of its kind, includes guidelines on the treatment of journalists covering armed conflicts that would make their work more dangerous, cumbersome and subject to censorship. Those should be repealed immediately.

Journalists, the manual says, are generally regarded as civilians, but may in some instances be deemed “unprivileged belligerents,” a legal term that applies to fighters that are afforded fewer protections than the declared combatants in a war. In some instances, the document says, “the relaying of information (such as providing information of immediate use in combat operations) could constitute taking a direct part in hostilities.”

The manual warns that “Reporting on military operations can be very similar to collecting intelligence or even spying,” so it calls on journalists to “act openly and with the permission of relevant authorities.” It says that governments “may need to censor journalists’ work or take other security measures so that journalists do not reveal sensitive information to the enemy.”

Allowing this document to stand as guidance for commanders, government lawyers and officials of other nations would do severe damage to press freedoms. Authoritarian leaders around the world could point to it to show that their despotic treatment of journalists — including Americans — is broadly in line with the standards set by the United States government.

Nice to see the NY TIMES stand up for a Free Press. Even in wartime. Finally.

RTFA for a more detailed albeit brief exposition. The editorial originally had a link to a .pdf of the relevant portion of the manual. That seems to have disappeared. But, we all know nothing ever really disappears from the Web.

Former US attorney general Eric Holder said in February 2014 that the department would release information on how law enforcement officials use its tool to investigate the news media.

The four-page annual report released on Friday includes 14 incidents, including the subpoena issued to Risen, who refused to divulge his CIA source for a chapter of his book about the Iran nuclear program. The informant, Jeffrey Sterling, was convicted on nine counts in January.

“Today’s report is an important step in the Justice Department’s ongoing efforts to promote the freedom of the press, to keep the American people informed and to improve transparency and accountability regarding media-related process,” said attorney general Loretta Lynch.

Also included in the report are a handful of attorney general-authorized questions, arrests, charges or subpoenas for court orders or search warrants.

Most of the cases involved the department attempting to get information about criminal investigations obtained through reporting, often with the news companies voluntarily submitting to questioning or complying with the department’s request…

You don’t need the actual words, do you? If you’re the sort of curious mind, the kind of individual who feels individual liberties must not be set aside in the normal course of growth and progress, you know the boiler-plate phrases our politicians are accustomed to rolling out to make us all calm and quiet.

Well, most of us. The ones who think limits on political parties, a tame press, theocracy and ignorance are all part of the natural state of affairs.

Kirby Delauter is not having a good week.

A council member of Frederick County, Maryland, he got into an online spat with local reporter Bethany Rodgers, attacking her for “for an unauthorized use of my name” in a “hit piece.”

In a Facebook post on Saturday, Delauter warned the reporter to never again “use my name or reference me in an unauthorized form.”

After Rodgers responded that reporters do not have to seek permission to write about public figures, the councilman simply wrote, “[u]se my name again and you’ll be paying for an Attorney [sic].”

BYW, the news article was about parking spots for county commissioners. Delauter got a one-sentence mention about supporting the complaints.

“Kirby Delauter’s ignorance of what journalism is and does is no joke, and illustrates one disturbing aspect too prevalent in conservatives’ beliefs: That the media are all-liberal stooges hell bent on pursuing some fictional leftwing agenda,” the editorial said.

Finally, as something of an Easter egg for the careful reader, the first letter of each paragraph spelled KIRBY DELAUTER.

Today’s flavor of American conservative are united in their support for Free Speech and a Free Press. Their own. No one else should have access to such freedoms, of course. That would be like allowing civil rights for everyone.

That would be socialism.

The U.S. general who opened the Guantanamo detention camp said Thursday it was a mistake and should be shut down because “it validates every negative perception of the United States.”

“In retrospect, the entire detention and interrogation strategy was wrong,” Marine Major General Michael Lehnert wrote in a column published in the Detroit Free Press.

Lehnert, now retired from the military and living in Michigan, was the first commander of the task force that opened the detention camp in January 2002 at the Guantanamo Bay U.S. Naval Base in Cuba.

He said the United States opened it “because we were legitimately angry and frightened” by the September 11 hijacked plane attacks in 2001 and thought the captives sent there would provide “a treasure trove of information and intelligence.”

He quickly became convinced that most of them never should have been sent there because they had little intelligence value and there was insufficient evidence linking them to war crimes, he wrote.

“We squandered the goodwill of the world after we were attacked by our actions in Guantanamo, both in terms of detention and torture,” Lehnert wrote. “Our decision to keep Guantanamo open has helped our enemies because it validates every negative perception of the United States…”

He added, “It is time to close Guantanamo. Our departure from Afghanistan is a perfect point in history to close the facility.”

But, that’s OK – because any attempt to redress legitimate grievances, to make things right by battlefield prisoners and kidnap victims held in violation of international law – will be met with disdain and denial by our Congress. The one body in US government which stinks worse than the Guantanamo prison camp.

The Canadian government has been accused of “muzzling” its scientists. Speakers at a major science meeting being held in Canada said communication of vital research on health and environment issues is being suppressed…

Prof Thomas Pedersen, a senior scientist at the University of Victoria, said he believed there was a political motive in some cases.

“The Prime Minister (Stephen Harper) is keen to keep control of the message, I think to ensure that the government won’t be embarrassed by scientific findings of its scientists that run counter to sound environmental stewardship,” he said. “I suspect the federal government would prefer that its scientists don’t discuss research that points out just how serious the climate change challenge is…”

The allegation of “muzzling” came up at a session of the AAAS meeting to discuss the impact of a media protocol introduced by the Conservative government shortly after it was elected in 2008.

The protocol requires that all interview requests for scientists employed by the government must first be cleared by officials. A decision as to whether to allow the interview can take several days, which can prevent government scientists commenting on breaking news stories.

END_OF_DOCUMENT_TOKEN_TO_BE_REPLACED

In the debate over Internet neutrality, Tea Party and other conservative activists have aligned their interests with those of major telecommunications companies…

Last month, many of the groups represented at Glenn Beck’s rally at the Lincoln Memorial, including Tea Party activists and Americans for Prosperity members, wrote to the Federal Communications Commission asking it to abandon attempts to regulate the Internet.

They oppose net neutrality — the notion that the federal government should establish rules of the road to prevent companies from indiscriminately blocking or slowing traffic for their own competitive advantage.

They asked the agency considering regulating it under Title II of the Communications Act to stop pursuing what they called “a massive regulatory regime that would stifle broadband expansion, create congestion, slow Internet speeds, jeopardize job retention and growth and lead to higher prices for consumers…”

“People no longer think it’s strange that the majority of the U.S. House is telling the Federal Communications Commission not to have authority over the dominant 21st century communications platform,” said Josh Silver, executive director of Free Press, which advocates net neutrality.