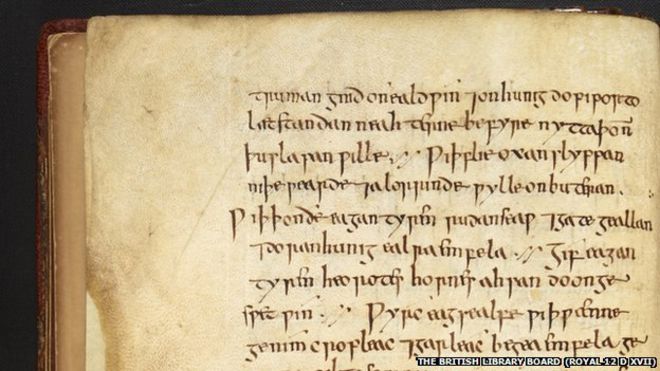 A 1,000-year-old treatment for eye infections could hold the key to killing antibiotic-resistant superbugs, experts have said.

Their findings will be presented at a national microbiology conference.

The remedy was found in Bald’s Leechbook – an old English manuscript containing instructions on various treatments held in the British Library.

Anglo-Saxon expert Dr Christina Lee, from the University of Nottingham, translated the recipe for an “eye salve”, which includes garlic, onion or leeks, wine and cow bile.

In each case, they tested the individual ingredients against the bacteria, as well as the remedy and a control solution.

They found the remedy killed up to 90% of MRSA bacteria and believe it is the effect of the recipe rather than one single ingredient.

“But we were absolutely blown away by just how effective the combination of ingredients was,” she said.

Nice to see modern researchers declare the scientific method predated many discoveries they thought might have been necessary to bring about the transition from superstition to methodical testing and verification.

That the effect of the whole compound is greater than the sum of its parts is just another portion of that realization.

Norway can outsource their vampires to China, as well

Prosecutor Thomas Ahlstrand in Gothenburg said on Wednesday that the men had shipped the 1.2 tonnes of Chinese garlic to Norway by boat, where it entered the country duty-free as it was considered to be in transit.

They then drove it across the Swedish border, avoiding customs checks and Swedish import duties. Ahlstrand said the men had avoided $13.1 million in Swedish taxes through the scheme.

He said a lengthy police investigation had led to the identification of two British men allegedly behind the operation, which took place in 2009-2010.

I guess they won’t tell us who they are until they’re busted. At least this speaks well of progressive changes in Scandanavian cooking. 🙂

Scientists have found a compound in garlic is 100 times more effective at fighting a common type of bacteria that causes food poisoning, called Campylobacter, than two types of antibiotic.

Campylobacter is commonly found both on the surface of poultry and inside the flesh. Cases of related food poisoning have been rising in recent years, due partly to an increasing fondness for serving ‘pink’ chicken liver pâté.

Now researchers at Washington State University in the US have found that a compound derived from garlic, called diallyl sulphide, is particularly effective at penetrating the slimy film that protects colonies of Campylobacter.

They found that, in a laboratory setting, it was 100 times more effective than the antibiotics erythromycin and ciprofloxacin, and would often work in “a fraction of the time”.

Barbara Rasco, associate professor of food science, said: “Diallyl sulphide could make many foods safer to eat. It can be used to clean food preparation surfaces and as a preservative in packaged foods like potato and pasta salads, coleslaw and deli meats…”

…Bob Martin, head of foodborne disease strategy at the Food Standards Agency (FSA), said: “Levels of Campylobacter in most raw chicken are high so it’s really important that chefs cook livers thoroughly to kill any bacteria, even if recipes call for them to be seared and left pink in the middle.

“The only way of ensuring the pâté or parfait will be safe to serve to your guests or customers is by cooking the livers the whole way through.”

Of course – if food processors were courageous enough to rely on Science 101 – they could just use a simple zap of gamma rays. They leave no trace and will kill any bacteria in their path.

Although “40 garlic cloves-chicken” is one of my favorite recipes.

One of Ireland’s top food producers has been found guilty of dodging taxes on more than 1,000 tons of imported Chinese garlic and sent to prison.

Paul Begley admitted running a scam from 2003 to 2007 in which he instructed his Chinese suppliers to produce false export invoices labeling garlic as apples. Irish import duties on apples are just 9 percent but on garlic up to 232 percent.

The fraud allowed Begley to avoid €1.4 million in tax. He has been trying to repay the sum since Dublin Port customs officers discovered the deception in 2007 but still owes €700,000.

A Dublin judge sentenced Begley to six years in prison…

Phew! Anyone notice tax avoiders in the USofA getting lambasted with a comparable penalty?

OTOH, why such a monster tariff on garlic? Are they preparing to defend against a vampire invasion?

Garlic has “significant” potential for preventing cardiomyopathy, a form of heart disease that is a leading cause of death in people with diabetes, scientists have concluded in a new study…

Wei-Wen Kuo and colleagues note that people with diabetes have at least twice the risk of death from heart disease as others, with heart disease accounting for 80 percent of all diabetes-related deaths. They are especially vulnerable to a form of heart disease termed diabetic cardiomyopathy, which inflames and weakens the heart’s muscle tissue.

Kuo’s group had hints from past studies that garlic might protect against heart disease in general and also help control the abnormally high blood sugar levels that occur in diabetes. But they realized that few studies had been done specifically on garlic’s effects on diabetic cardiomyopathy.

I grew up with garlic in everything we ate – the Italian half of the family absolutely owned the family menu. And Italian-Americans notoriously use more garlic than do their relatives back in Italy. Fortunately, though my honey grew up with an entirely different family palate, her own choices as an adult followed the same Mediterranean pathways.

Nordic customs officials have arrested a truck driver after he tried to illegally import 28 tons of Chinese garlic into the European Union.

The driver was intercepted last month as he drove the pungent truckload from Norway, which is outside the EU and where garlic is exempt from customs’ duties, into Sweden, where garlic is subject to a 9.6 percent EU-wide duty.

Smuggling of cheaply produced Chinese garlic into the EU is on the rise, with around 1,200 tons brought into the 27-nation bloc via Norway since 2009, according to the European Anti-Fraud Office, known as OLAF.

“The interception of the lorry was the result of a carefully prepared initiative coordinated by OLAF,” the EU said in a statement. “This action came about due to the excellent cooperation provided by Norwegian and Swedish customs.”

I don’t believe any nation can have too much garlic.

Imposing a duty of almost 10% is just crap protectionism. Not that that is outside the framework of most EU political decisions, anyway.

It was widely believed that the organic compound, allicin – which gives the pungent vegetable its aroma and flavour – acts as an antioxidant. But until now it hasn’t been clear how allicin works, or how it stacks up compared to more common antioxidants such as Vitamin E and coenzyme Q10, which stop the damaging effects of radicals.

“We didn’t understand how garlic could contain such an efficient antioxidant, since it didn’t have a substantial amount of the types of compounds usually responsible for high antioxidant activity in plants, such as the flavanoids found in green tea or grapes,” says Dr. Derek Pratt. “If allicin was indeed responsible for this activity in garlic, we wanted to find out how it worked.”

The research team questioned the ability of allicin to trap damaging radicals so effectively, and considered the possibility that a decomposition product of allicin may instead be responsible. Through experiments with synthetically-produced allicin, they found that sulfenic acid produced when the compound decomposes rapidly reacts with radicals.

“While garlic has been used as a herbal medicine for centuries and there are many garlic supplements on the market, until now there has been no convincing explanation as to why it is beneficial,” says Dr. Pratt. “I think we have taken the first step in uncovering a fundamental chemical mechanism which may explain garlic’s medicinal benefits.”

Interesting to learn that a variable like the rate of decomp governs the production of sulfenic acid. Raises questions about imparting a similar mechanism to other alliums? We’re getting to where genomics has such capabilities.