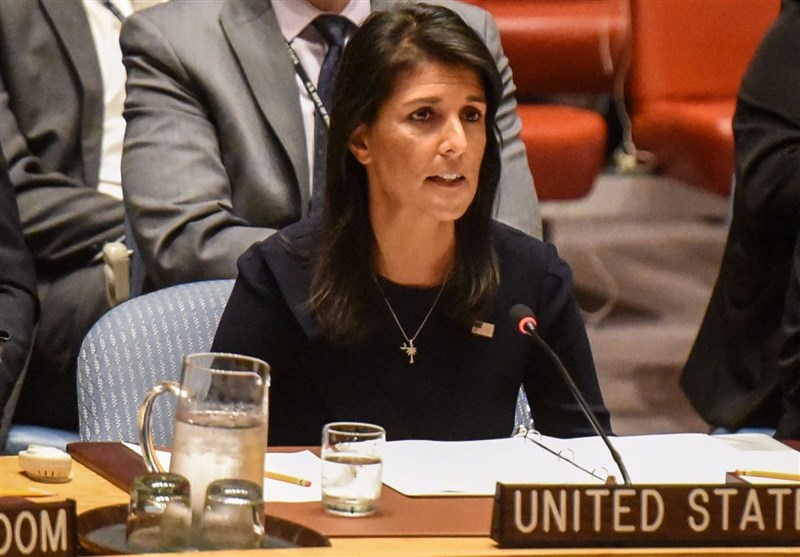 ❝ A Russian comedy duo apparently pranked US envoy to the UN Nikki Haley, who assured them the US is closely following the situation on the fictional island of Binomo and will “continue to remind” Russia “what their place is.”

❝ Famous Russian pranksters Vovan and Lexus (Vladimir Kuznetsov and Alexey Stolyarov) released the recording of yet another one of their prank calls, in which they allegedly tricked Nikki Haley into believing she was speaking with Polish Prime Minister Mateusz Morawiecki…

During the 22-minute conversation…the pranksters raised concerns over Russian interference in the political affairs of an imaginary South China Sea island – Binomo – which does not exist on the world map. Haley, however, seemed to be on top of things, claiming the US is watching the situation there very carefully.

RTFA. Presumably Ms Haley realized her mistake when she sought info from her staff about the problems on Binomo. Spoke to someone with more knowledge of geography.

You’re more likely to be shot by accident and die in Alabama than anywhere else in the U.S.

That’s according to a report published…by the Centers for Disease Control and Prevention, showing the most distinct causes of death in each state from 2001 to 2010. Using a list of 136 ways to go, each state is labeled with a cause of death that was higher on average than the rest of the U.S…

The map glimpses at less-discussed causes of death. Without killers like cancer and heart disease, things start to look a little weird. In Alaska and Idaho, air and water accidents were the most distinct cause of death. Flu claimed more lives in northern states like Maine and South Dakota than anywhere else.

Some of the unusual ways to kick the bucket were due to occupational hazards. In the coal-mining states of Kentucky, West Virginia, and Pennsylvania, black lung disease, or pneumoconiosis, and chemical effects stood out.

In New York and neighboring Connecticut, female pelvic inflammatory diseases top the list. In women who get sexually transmitted diseases such as chlamydia and gonorrhea, the infections can spread when untreated, causing death in some cases.

I live in one of the states where the most distinct cause of death was “legal intervention.” You may have reason to wonder what that might mean. RTFA.

I knew exactly what it was. Instantly.

New research by a Florida State University geography professor shows that climate change may be playing a key role in the strength and frequency of tornadoes hitting the United States.

…Professor James Elsner writes that though tornadoes are forming fewer days per year, they are forming at a greater density and strength than ever before. So, for example, instead of one or two forming on a given day in an area, there might be three or four occurring…

Elsner, an expert in climate and weather trends, said in the past, many researchers dismissed the impact of climate change on tornadoes because there was no distinct pattern in the number of tornado days per year. In 1971, there were 187 tornado days, but in 2013 there were only 79 days with tornadoes.

The United States experiences more tornadoes than any other country, and despite advances in technology and warning systems, they still remain a hazard to residents in storm-prone areas. The 2011 tornado season, for example, had nearly 1,700 storms and killed more than 550 people…

One bright spot of news in the research, Elsner added, was that the geographic areas impacted most regularly by tornadoes do not appear to be growing.

Interesting work and especially relevant in this period of climate change. Too bad politicians and other scatterbrains find it easier to focus on ideology and elections than actually developing a response to the changes we’re still analyzing and understanding.

Kudos to people like Professor Elsner for maintaining dedication to research even when there are know-nothings in the Florida legislature who would rather defund work like this than confront change.

Tell Romney that Syria and Iran haven’t a common border

“Maybe one of the few bright spots in the Middle East developments in the last year has been the rising of the people in Syria against [President Bashar al-] Assad. Obviously, as you know, Syria is Iran’s only Arab ally in the region. Syria is the route that allows Iran to supply Hezbollah with weapons in Lebanon. Syria is Iran’s route to the sea.”

We’ve puzzled over this comment for a while. When the presumptive GOP nominee referred to Syria as Iran’s “route to the sea” during the Arizona GOP debate in February, we figured it was just a slip of the tongue.

But then a reader counted at least five times in which Romney has used this phrase, including in the Feb. 22 debate, at last month’s American Israel Public Affairs Committee annual conference, in a TV interview (MSNBC, Dec. 21), on the radio (Kilmeade & Friends, Feb. 14) and even in a Washington Post interview (Feb. 10).

Considering that Syria shares no border with Iran — Iraq and Turkey are in the way — and that Iran has about 1,500 miles of coastline along the Persian Gulf and Gulf of Oman, leading to the Arabian Sea, the reader wanted to know: What’s Romney talking about?

The man is an ignoranus. He may be bright enough enough get through Harvard Law – twice if I recall correctly – but, maybe Harvard dumbs things down for the children of prominent politicians. Yale certainly gets accused of that often enough [Eh, George W?].

Perhaps someone tried to explain to him how, for example, modern Lebanon is essentially a creation of Colonial France after World War 1. He thought there was a parallel? Or the man is an ignoranus.

Even as schools aim to better prepare students for a global work force, fewer than one in three American students are proficient in geography, with most eighth graders unable to explain what causes earthquakes or accurately describe the American Southwest…

The average test score for 12th graders declined to 282 (on a scale of 500) from 284 in 2001 when the test was last given. It remained essentially unchanged for eighth graders during that period, though there were gains among the lowest-performing students. Fourth graders had the largest gains, with the average score rising to 213, up five points from 2001.

“Geography is not just about maps,” said David P. Driscoll, chairman of the National Assessment Governing Board, who expressed concern that students were not doing better in geography. “It is a rich and varied discipline that, now more than ever, is vital to understanding the connections between our global economy, environment and diverse cultures…”

Roger M. Downs, a geography professor at Pennsylvania State University who has studied the results, said that while he was encouraged by the improving test scores for fourth graders, and for low-performing and minority students, he was concerned that “geography’s role in the curriculum is limited and, at best, static.”

“That is ironic given the convincing case that can be made for the importance of geographic literacy,” Mr. Downs said. “But it is doubly ironic given a world in which adults and now children have smartphones and tablets that can download maps on the fly, provide directions to places, and give your location to your friends…”

Some of our local high school graduates would have a hard time finding a rock concert one state over – except for the freeway taking them straight to the appropriate city.

I know it’s an easy hit to comment on the ignorance our school systems roll out like so many candy bars on a Cadbury production line. There still breathes a jot or two of hope that repeated smacks on the bottom will jolt some life not only into voters who easily share missing the absence of educated graduates – but, folks who care about how and what combines into local movements to turn our education systems back into something that once did our country proud.

Every autumn, as predictably as falling leaves, flu season descends upon us. Every spring, just as predictably, the season comes to a close. This cyclical pattern, common in temperate regions, is well known, but the driving forces behind it have been in question.

Do existing strains die off each spring, only to be replaced each fall by new founding strains from other parts of the world, or does a “hidden chain of sickness” persist over the summer, seeding the next season’s epidemic?

A genetic analysis by University of Michigan postdoctoral fellow Trevor Bedford and colleagues at U-M, Howard Hughes Medical Institute and Florida State University reveals that in the United States, not all strains of influenza die off at the end of winter; some move southward to South America, and some migrate even farther.

“We found that although China and Southeast Asia play the largest role in the influenza A migration network, temperate regions — particularly the USA — also make important contributions,” Bedford said. Rather than dying off at the end of our flu season, many strains simply move on to more favorable environments.

Growing knowledge about patterns of flu migration eventually may make it possible to tailor vaccines to particular locations, Bedford said.

“We found, for instance, that South America gets almost all of its flu from North America. This would suggest that rather than giving South America the same vaccine that the rest of the world gets, you could construct a vaccine preferentially from the strains that were circulating in North America the previous season. As we gather more data from other regions, this could be done for the entire world.”

All the more reason to develop a universal flu vaccine – even if it needs to be tailored geographically.

Captain Jack Harkness will sort this lot out!

While you may be sure Cardiff is the capital of Wales, Facebook users in the city were baffled after the social networking website put it in England.

People in Swansea, Wrexham and even the very Welsh sounding Llandrindod Wells were confused too as the location on their profile was also moved there. Over 8,000 users joined campaign groups demanding the locations on their profiles be returned to Wales.

Facebook blamed the problem on a bug and apologised…

Student Alex Smith said his friends had changed their location on their profiles to different Cardiffs elsewhere in the world as a protest.

Mr Smith, 18, said he had been a user of the site almost since it launched in 2004 and the problem had never happened before…

A spokesperson for Facebook said: “There was a bug causing this issue which has been fixed. We apologise to users who were affected.”

Let’s see. Facebook was founded by American college graduates. It’s maintained and run in the GOUSA.

Do you know anyone in the United States who knows squat about geography?