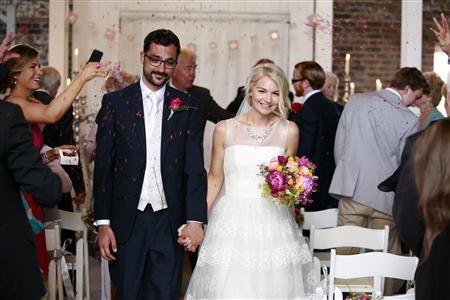 Brandan Hastings, Suzy Addis after their Humanist wedding in Slane

Traditionally Catholic Ireland has allowed an atheist group to perform weddings this year for the first time, and the few people certified to celebrate them are overwhelmed by hundreds of couples seeking their services.

Demand for the Humanist Association of Ireland’s secular weddings has surged as the moral authority of the once almighty Catholic Church collapsed in recent decades amid sex abuse scandals and Irish society’s rapid secularization.

Until now, those who did not want a religious wedding could have only civil ceremonies. Outside of the registrar’s office, only clergy were permitted to perform weddings.

But statistics show rising demand for non-Church weddings. In 1996, 90 percent of Irish weddings were performed by the Catholic Church or the Church of Ireland. But by 2010 that percentage had fallen to 69 percent.

The pent-up demand from those who want more than a civil ceremony in a registry office but reject a religious wedding has created a major backlog for the humanist group’s ceremonies director.

Brian Whiteside, initially the only humanist “solemnizer” certified to legally marry couples, was already booked well into next year when the civil registry office agreed in late June to approve 10 others, taking some of the pressure off him.

“It remains very, very busy,” Whiteside said. “We’re all finding it difficult to keep up with the inquiries. We had 595 new inquiries in the first three months of this year, which in a little country like Ireland is quite a few.”

With all the din made by official religious sources opposing everything from abortions that save lives to civil rights for LGBT couples you might think the wave of progressive sociology and philosophy growing throughout the educated world might have skipped over Ireland.

I’m pleased to see that’s not so. And, then, there’s the United States.

The season of turkey, goodwill and consumerism might seem to be a long way off yet, but a December performance of “Nine Lessons and Carols for Godless People” that includes a turn by Richard Dawkins and the Guardian’s own Ben Goldacre has already sold out.

Have no fear though, the Bloomsbury Theatre in London, which is hosting the event on December 19, has now added another date on December 18 – but hurry up, tickets go on sale today and are expected to sell out fast.

The show is a spin-off of comedian Robin Ince’s regular show The School for Gifted Children and is being produced with the help of the folks at the New Humanist magazine. It is billed as, “a night of music and comedy to celebrate the rational and scientific and debunk Winterval myths spouted by religious and media ninnies.”

They’re featuring one musical group I haven’t been able to download [yet] from iTunes: the Martin White mini fax machine orchestra.