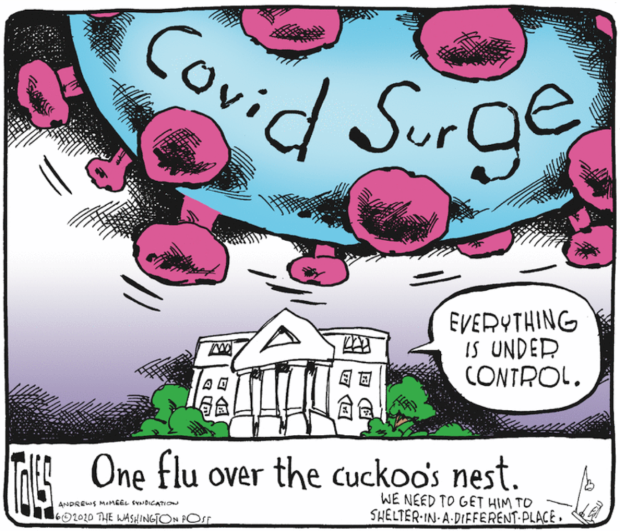 Toles is a literary/political genius! 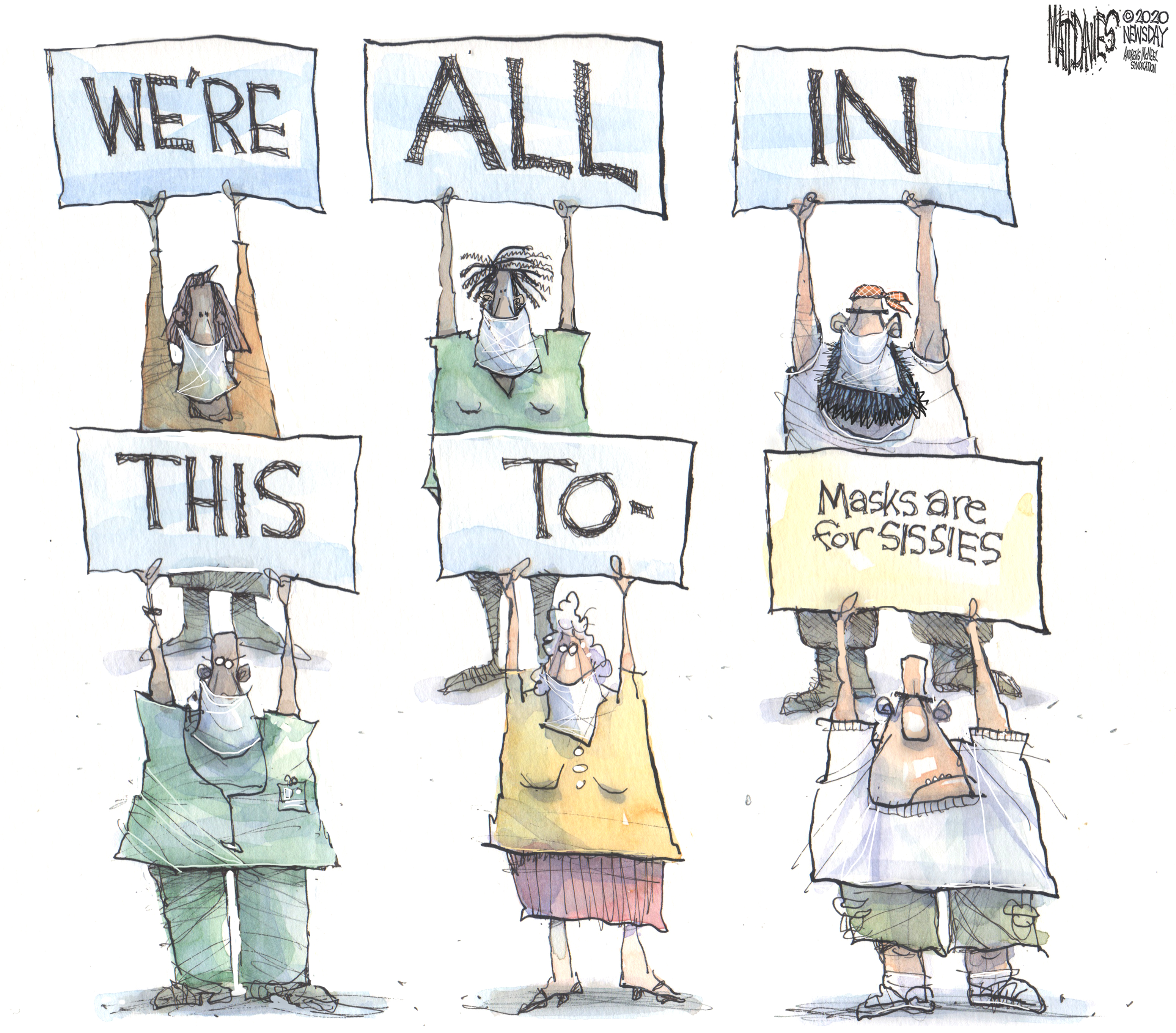 At a hearing Tuesday on Capitol Hill, Dr. Anthony Fauci of the National Institutes of Health and other federal officials said that no one had told them — including President Trump — to slow down testing for the coronavirus. The statements came after Trump has repeatedly said that more testing would lead to more infections being revealed…

Trump has been much criticized for his handling of the coronavirus outbreak. The U.S. has the largest number of confirmed cases in the world — more than 2.3 million — as well as the most deaths — about 120,000. The daily number of people dying with COVID-19 has declined in recent weeks, but the number of cases is rising in many parts of the country…

Later in the testimony, Rep. Jerry McNerney, D-Calif., asked Fauci and Redfield whether they had been consulted about Trump’s decision to withdraw the U.S. from the World Health Organization. Fauci and Redfield said they had not been directly consulted, but that they keep working with the agency on health matters.

“The CDC has a long history of working with WHO. We continue that collaboration,” Redfield said. “We continue working at the technical scientist-to-scientist level.”…

Rep. Bobby Rush, D-Ill., raised the issue of how the virus has disproportionately endangered African Americans and other minorities…

“Obviously, the African American community has suffered from racism for a very, very long period of time,” Fauci said. “And I cannot imagine that that has not contributed to the conditions that they find themselves in, economically and otherwise. So the answer, congressman, is yes.”

The hearing was interesting, useful. I always get a chuckle over the number of times Trumpo blathers out talking points aimed at the lower lifeforms who automagically vote for him. And, then, an enterprising newsperson checks up and verifies that the Trumpet hasn’t done a damned thing.

Not that he hasn’t instituted the most evil destruction of law and progress in American history. He just can’t stop lying.

On Tuesday evening, the Lincoln Memorial was a place only for the police and troopers who, standing behind metal barriers, kept the public away.

Masked troops — some wearing vests that read “military police” but most simply in camouflage battle dress — stood in even rows on the steps of the Lincoln Memorial on Tuesday. They appeared to be National Guard, but many lacked flags, name tags or other identifying badges.

Welcome to the Fascist Nation of 21st Century America. That’s neither an abuse or even overuse of the term. The definition fits better and better every day remaining of the Fake President in office.

James P. Bradley (R) CA-33 @BradleyCongress US House candidate, CA-33 5:39 AM May 19, 2020: ”@realDonaldTrump taking hydroxychloroquine to ward off coronavirus is a kick-ass move that proves why he is the bravest and strongest of all American presidents.”

Now, I have to change my shoes. Put on my rubber boots! 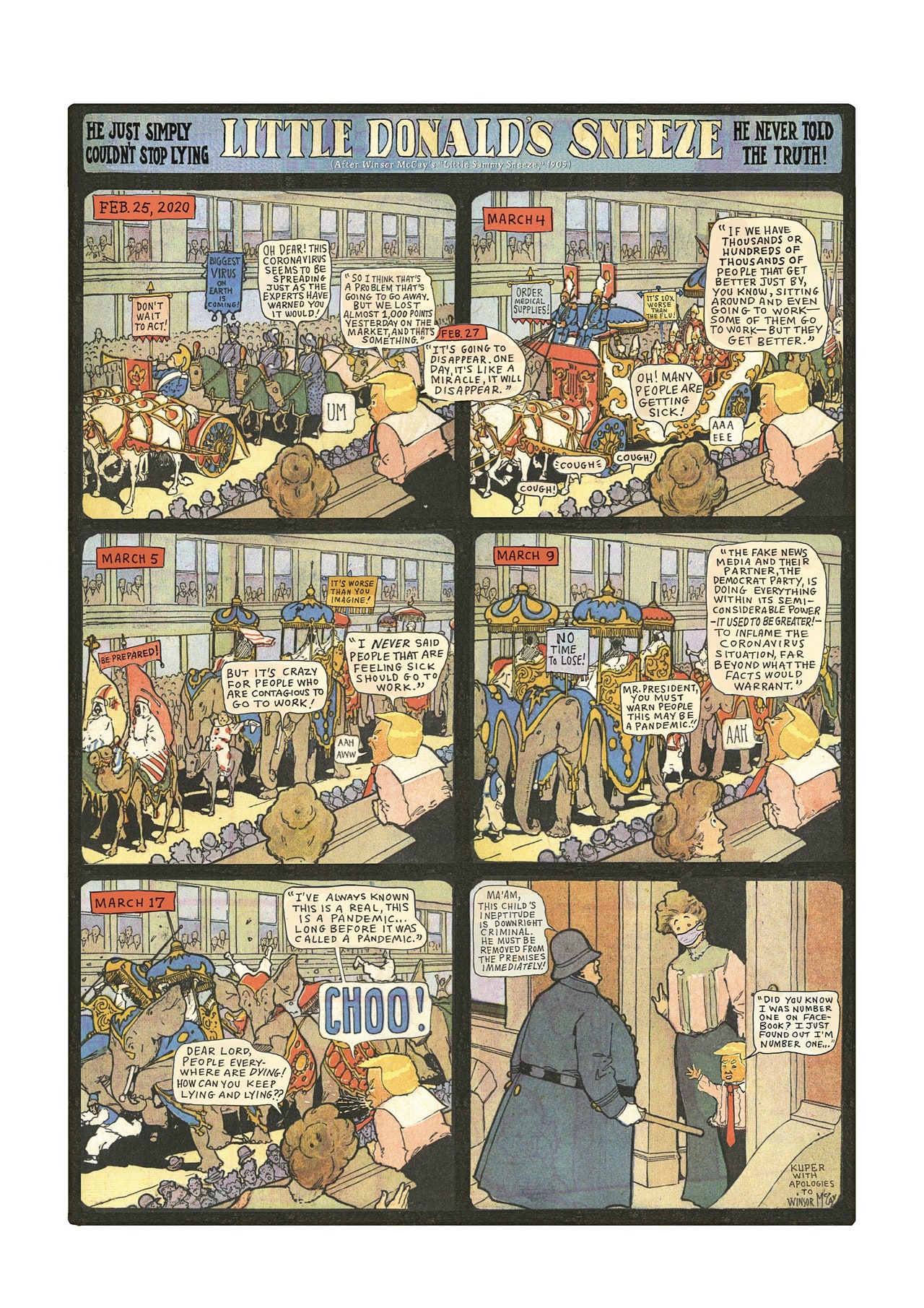 In the early weeks of the coronavirus epidemic, the United States recorded an estimated 15,400 excess deaths, nearly two times as many as were publicly attributed to COVID-19 at the time, according to an analysis of federal data conducted for The Washington Post by a research team led by the Yale School of Public Health.

The excess deaths – the number beyond what would normally be expected for that time of year – occurred during March and through April 4, a time when 8,128 coronavirus deaths were reported.

The excess deaths are not necessarily attributable directly to COVID-19, the disease caused by the coronavirus. They could include people who died because of the epidemic but not from the disease, such as those who were afraid to seek medical treatment for unrelated illnesses, as well as some number of deaths that are part of the ordinary variation in the death rate. The count is also affected by increases or decreases in other categories of deaths, such as suicides, homicides and motor vehicle accidents.

But in any pandemic, higher-than-normal mortality is a starting point for scientists seeking to understand the full impact of the disease.

IMHO, responsibility for the excess, accountability for the death of thousands more than should have been expected, lies upon the head of the incompetent and phony we have occupying the White House as President of the United States.

I spent a significant portion of my life in New Haven, in and around the Yale community. Hard to miss if you’re in that Connecticut city and active in any portion of cultural life. The institutions formed by that university play an even greater role in the life of our nation and, in fact, the world. The Yale School of Public Health deservedly owns that characterization.

RTFA. Learn stuff. Maybe even act politically this autumn to rid our nation of corruption and crime at the head of government.

Protesters in Washington, D.C., showed their disapproval of how President Donald Trump is handling the coronavirus in very graphic terms Thursday evening.

The demonstrators laid out fake body bags in front of the Trump International Hotel to represent the now more than 50,000 Americans who have died from COVID-19.

Trump is as useless as rubber lips on a woodpecker.