No more than 7% of the human genome is unique to Homo sapiens, according to a study published Friday in the journal Science Advances.

We share the remaining chunks of our genetic material with other human ancestors, or hominins, including our Neanderthal cousins and the Denisovans first discovered in east Asia.

“The evolutionary family tree shows there are regions of our genome that make us uniquely human,” Richard Green, director of the paleogenomics lab at the University of California, Santa Cruz and co-author of the new study, told Insider. “Now we have a catalog of those, and it’s a surprisingly small fraction of the genome…”

“More or less everywhere we look, admixture is not the exception at all, but rather the rule,” Green said.

Of course I find the research fascinating. Not that the admixture of Neanderthal and Denisovan genes [and others] diminishes or alters the Homo Sapiens characteristics. Still, I reflect upon what colors my emotions and judgement from my Neanderthal ancestors. I have 3% directly identifiable genetic material from that stream of evolution.

Over the past two decades, DNA retrieved from ancient fossils has transformed scientists’ understanding of human evolution. Analysis of the similarities and differences in the DNA of different hominin groups has allowed researchers to map out the tangled family tree in a way that was previously not possible. And genetic material has led to some major finds, such as the discovery of Denisovans in the first place…

Ancient DNA has also left geographical blind spots. DNA degrades faster in warm environments, so although a 100,000-year-old specimen found in a cold Siberian cave might still harbour genetic material, a fossil that has spent that long in the heat of Africa or southeast Asia generally will not. As a result, little is known about the genetics of even relatively recent hominins from these regions, such as H. floresiensis…

Now researchers are hoping that protein analysis might begin to fill in some of those blanks. The idea is not new: as early as the 1950s, researchers had reported finding amino acids in fossils. But for a long time, the technology needed to sequence ancient proteins just didn’t exist … That changed in the 2000s, after researchers realized that mass spectrometry — a technique used to study modern proteins — could also be applied to ancient proteins. Mass spectrometry essentially involves breaking down proteins into their constituent peptides (short chains of amino acids) and analysing their masses to deduce their chemical make-up.

RTFA. Fascinating as paleontology can always be. Learning the where and when of how we got to here and now. True science never walks away from a problem because it’s difficult. Even when it takes generations to resolve.

Approximately 176,500 years ago, in a cave in what is now called France, Neanderthals cut 400 pieces of stalagmite into regular lengths and arranged them in two circles and four piles. In 1990, a teenager and a group of local cavers rediscovered them. Only now, though, have scientists estimated just how old they are—dating well beyond the history of Homo sapiens in this area.

This is one of the earliest examples of construction ever found, and the first example of Neanderthal construction that scientists have dated. It shows that these early homonins explored underground and could use fire and reveals an unknown aspect of their culture. It’s not clear what the circle of stones was used for, but it’s possible it had a ritual function, since there’s no evidence that anyone actually lived in the cave.

The more we learn about Neanderthals, the smarter and more complex was their lifestyle, using fire, creating design art. All before the newer iteration of humans expanded into regions already populated by our older cousins. 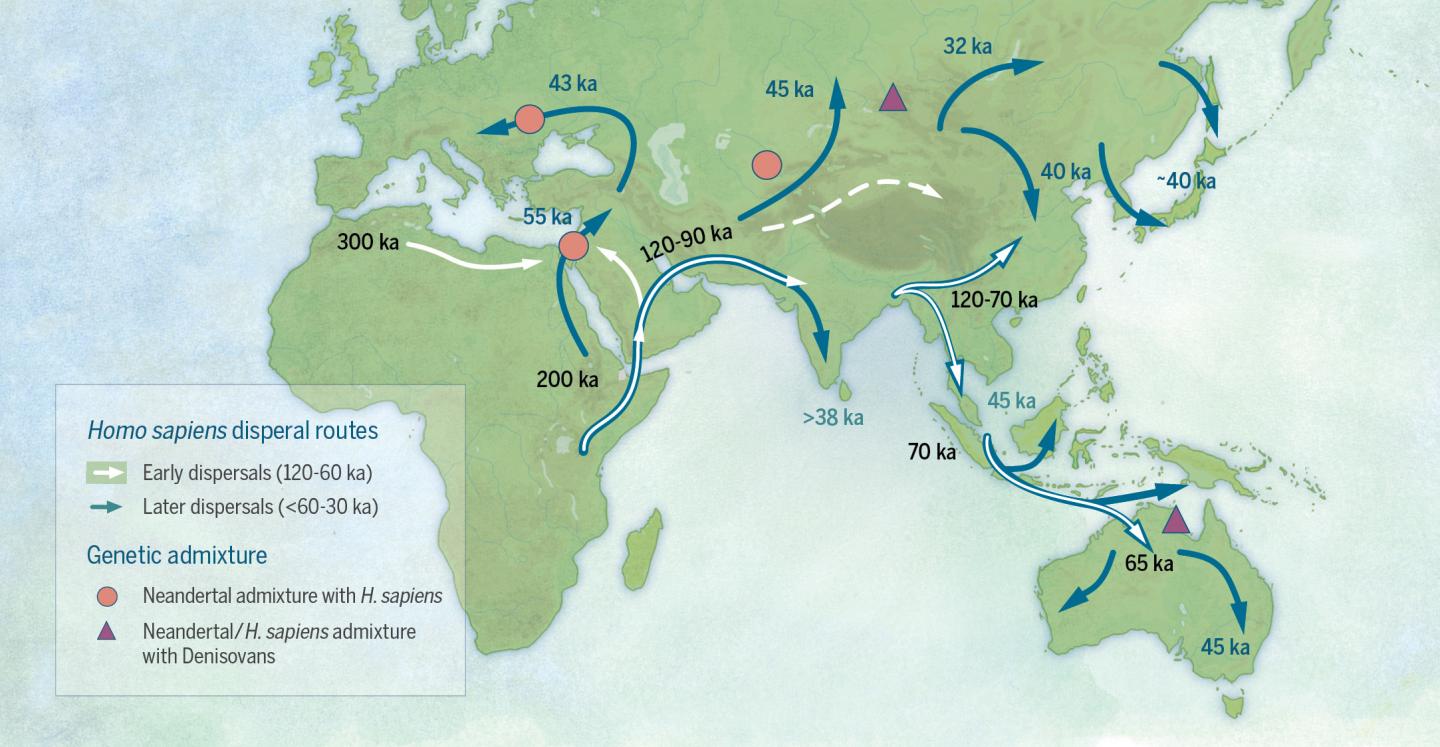 ❝ Most people are now familiar with the traditional “Out of Africa” model: modern humans evolved in Africa and then dispersed across Asia and reached Australia in a single wave about 60,000 years ago. However, technological advances in DNA analysis and other fossil identification techniques, as well as an emphasis on multidisciplinary research, are revising this story. Recent discoveries show that humans left Africa multiple times prior to 60,000 years ago, and that they interbred with other hominins in many locations across Eurasia.

❝ A review of recent research on dispersals by early modern humans from Africa to Asia by researchers from the Max Planck Institute for the Science of Human History and the University of Hawai’i at Manoa confirms that the traditional view of a single dispersal of anatomically modern humans out of Africa around 60,000 years ago can no longer be seen as the full story. The analysis, published in the journal Science, reviews the plethora of new discoveries being reported from Asia over the past decade, which were made possible by technological advances and interdisciplinary collaborations, and shows that Homo sapiens reached distant parts of the Asian continent, as well as Near Oceania, much earlier than previously thought. Additionally, evidence that modern humans interbred with other hominins already present in Asia, such as Neanderthals and Denisovans, complicates the evolutionary history of our species.

The Max Planck Institute is the gold standard for research into the evolutionary biology of homo sapiens. When original discussions stretched around the world at the turn of the 21st Century, debate and discussion took over a great deal of public and non-institutional dialogue on the latest discussions of evolution. Scuence readers and writers as well as core researchers were all involved.

I spent about 2 years getting my head around the results of the first DNA analysis providing deeper genetic and chronological analysis previously impossible. While spirited debate was often the order of the day – well above the perpetual attempts to educate superstitious folk stuck into biblical fiction – I have rarely so enjoyed the weekly expansion of knowledge rolling out the doors of the Max Planck Institute like tides changing the face of the intellectual Earth after an Ice Age.

Oh, yeah. Between 3 and 4% of my overall DNA is Neanderthal. Never was one of those straight-up white guys. 🙂

A site worth visiting week after week.

And if you need to back up and peruse a wider view of the comparative unimportance of our species – and the truly irrational crappola of True Believers – play and rewind this voyage through our nearest neighbor, Andromeda. Reflect upon this view of a less-than significant morsel less important than a mustard seed lost on the beach in Coney Island.

But – we think we’re important.

Deforestation, climate change and the dramatic impact human societies have had in reshaping the Earth for the past few thousand years are taking an extraordinary toll on its animal species, which are dying off about 1,000 times faster today than they did before humans arrived.

It all adds up to the sixth mass extinction in the planet’s history, the editors of Science Magazine report in a special series of scientific studies…which both explore the implications of “anthropocene defaunation” and offer prescriptions for how we might re-colonize animal populations throughout the world…

Scientists point out that extinctions of individual species aren’t uncommon, as more than 99 percent of all the known species ever to have existed on Earth are now gone forever.

What has changed is the speed with which species are going extinct, a phenomenon scientists chalk up to the impact humans have had on the planet for the past two centuries. Many argue we should call the age we’re living in the “Anthropocene,” or the Age of Man.

That’s because the impact humans are having on the planet and its ecosystems — killing off species by destroying their habitats for building cities and agriculture, hunting them and overfishing them to extinction, and by the industrial pollutants we pump into the atmosphere, and into our lakes, rivers and oceans — are so dramatic that they constitute a definable geological time scale for the planet like the Holocene or the Pleistocene…

Earth has experienced five previous mass extinction events, most caused by giant meteors slamming into the Earth. The best-known of these is probably the one that killed off the dinosaurs, along with 75 percent of all other species, about 66 million years ago. Ninety percent of all animal species were lost in another extinction more than 250 million years ago, which has been called the “Great Dying.”

What’s different about today’s extinction? “The underlying driving force for this is not a meteorite or a mega-volcanic eruption; it is one species – homo sapiens“…

“Though for emotional or aesthetic reasons we may lament the loss of large charismatic species, such as tigers, rhinos, and pandas, we now know that loss of animals, from the largest elephant to the smallest beetle, will also fundamentally alter the form and function of the ecosystems upon which we all depend,” the study says.

Read the full special report on “Vanishing Fauna” at Science.

The significant difference about this horribly negative event is that – not only is this mass extinction to a large extent preventable – the creatures who are the cause, so far, are doing so little to prevent the extinction that we may end up including ourselves among the victims.

The new view is fast supplanting the traditional idea that modern humans triumphantly marched out of Africa about 50,000 years ago, replacing all other types that had gone before.

Instead, the genetic analysis shows, modern humans encountered and bred with at least two groups of ancient humans in relatively recent times: the Neanderthals, who lived in Europe and Asia, dying out roughly 30,000 years ago, and a mysterious group known as the Denisovans, who lived in Asia and most likely vanished around the same time.

Their DNA lives on in us even though they are extinct. “In a sense, we are a hybrid species,” Chris Stringer, a paleoanthropologist who is the research leader in human origins at the Natural History Museum in London, said in an interview.

The Denisovans were first described a year ago in a groundbreaking paper in the journal Nature made possible by genetic sequencing of the girl’s pinky bone and of an oddly shaped molar from a young adult. Those findings have unleashed a spate of new analyses.

Scientists are trying to envision the ancient couplings and their consequences: when and where they took place, how they happened, how many produced offspring and what effect the archaic genes have on humans today…