❝ House Republicans made their tax bill public today. Boiled down to the basics, it is a mid-sized tax cut–aimed mostly at businesses and their owners. Here are five big take-aways.

❝ It is a tax cut, not tax reform.

It is not the biggest income tax cut in history—not even close– despite President Trump’s repeated promises that it would be.

For households, it will almost surely create winners and losers. Many middle-income households are likely to pay more under this plan, not less.

It is not tax simplification. Indeed, for many taxpayers the House bill would make filing more complicated.

At the end of 10 years, it likely would end up increasing the deficit by far more than the advertised $1.5 trillion.

It will not lead to a 3 percent permanent economic growth.

Howard Gleckman from the Tax Policy Center offers up the gold standard for truthful tax analysis inside the Beltway. No doubt the Congressional Budget Office will soon be out with a version – more polite; but, no less accurate and free from the lies today’s Republicans seem to need before they even put their pants on in the morning.

RTFA. You won’t enjoy it. At a minimum, you won’t have to hold back a belch over fake news, fake statistics, 19th Century ideology. 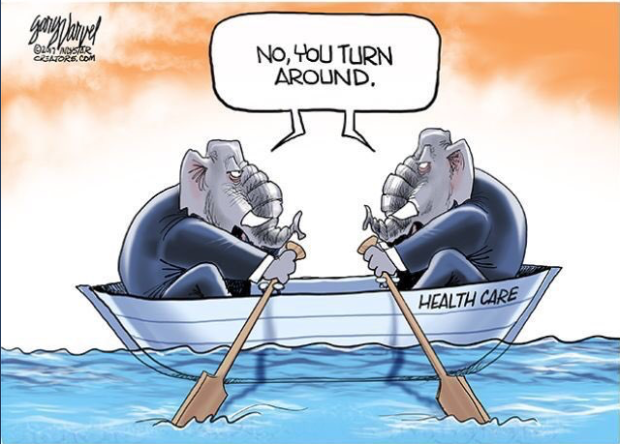 Thanks Ian Bremmer for the cartoon

As it became clear that Republican resistance to the bill was hardening, House speaker Paul Ryan went to the White House to tell Trump in person that he did not have the votes to pass the bill.

However, as the 3.30pm deadline slid by, first reports emerged that Trump had asked for the vote to be pulled.

Sometimes the truly corrupt get what they deserve. True, there isn’t much difference between Congressional Republicans [or Blue Dog Democrats] and a slug like Donald Trump. Corrupt. Liars. Useless to the real needs of American workers, American working-class families.

Trump is more of a pathological liar than the crafty slime stinking up Congress with each of their several sects, e.g. Tea Party, so-called Freedom Caucus, neo-cons, whatever. So, give him credit for being the worst of the lot. 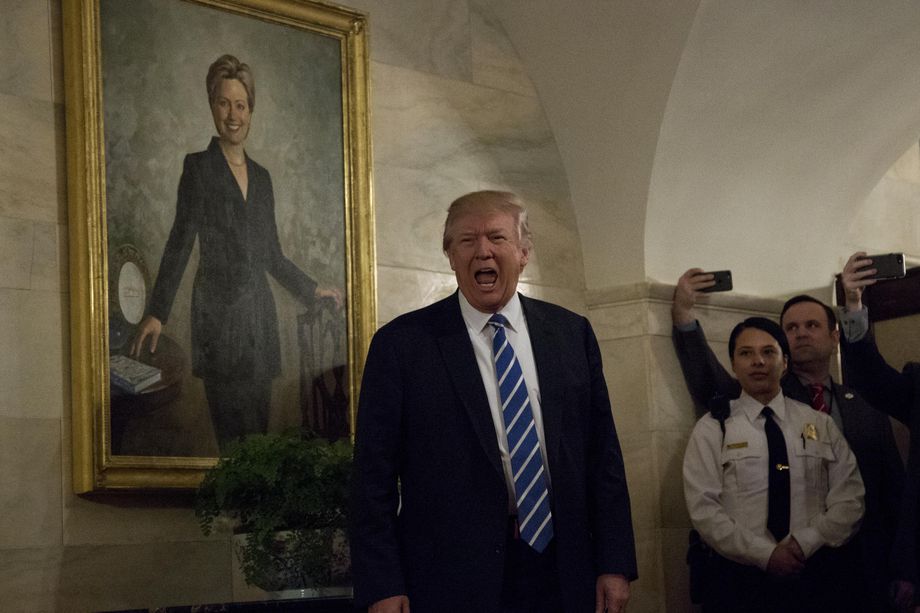 If this keeps up, Philadelphians might want to consider renaming their football team.

The city’s Department of Licenses and Inspections was set to demolish a long-vacant home that residents say has become home to a committee of turkey vultures. Yes, a group of the birds — sometimes also called buzzards — is known as a “committee.”

Christina Ali-Bey says she lives next door to the home and can hear the vultures scratching and walking around all night long, “like a horror movie.”

She’s even afraid the birds will scoop up her tiny dog, Rocco, a teacup Yorkie. Other residents see the birds regularly picking through their trash.

The birds are a protected species, so it’s illegal to harm or kill them.

Perhaps this will serve as a lesson to the city about boarding up – checking to maintain access closed – abandoned housing. Or better yet, put it to temporary use housing the homeless.

Featured twice on ABC’s Good Morning America – song is “Christmas Can Can” by Straight No Chaser. This is my first year decorating and this is my first sequence ever. I built almost everything from scratch using wood and acrylic. I am a music/teacher director for a living (COVA Conservatory in Oakland and Centerville Presbyterian Church in Fremont), hence the massive instruments! The guitar is 17′, the piano is 19′ — Tom BetGeorge

The U.S. Senate voted 97-0 on Monday to pass reforms in how the military handles sexual assault cases, but it probably will be months before the changes become law.

The measure must still be approved by the House of Representatives, where Democratic and Republican aides said it is unlikely to be up for a vote until later in 2014.

Backed by Senator Claire McCaskill, a Missouri Democrat, the bill includes significant changes such as eliminating the “good soldier” defense allowing a court to reduce the sentences of offenders who have strong military records.

The Senate is bipartisan in being chickenshit!

High-profile military sexual assault cases, some involving defense officials responsible for prosecuting sex crimes, also contributed to charges that the Pentagon has not been serious enough about stopping an epidemic of sexual assaults seen as a “cancer” in the armed forces…

The bill that was passed on Monday is unlikely to go to the House as a standalone measure. Instead it is likely to be included as part of a bill expected later this year that authorizes Pentagon spending.

Senator Kirsten Gillibrand, Democrat of New York, offered a tougher bill which would have taken responsibility out of the good ol’ boy network. She couldn’t get enough Dems to support it to press past Senate Republicans.

I don’t know anyone who expects much of anything useful to happen in the House – controlled as it is by Tea Party misogynists and cowardly lion Republicans. They may allow the proposal to be passed back to Senate as an amendment – after the midterm elections in November.

Six adults, including Walter Serpit, and two children were in the living room of their Columbus, Ga., home on Thursday afternoon when smoke began pouring in. All eight people made it outside safely, but Serpit, with the aid of his cane, went back for what really mattered — his beer.

“I told them to get the kids out and everything, and me myself, being an alcoholic, I was trying to get my beer out,” Serpit said. “You feel me?”

He was able to save several cans of beer and avoid getting burned. “I went back into the house like a dummy and the door shut on me because this back draft was about to kill me,” Serpit said.

Officials are still looking into what caused the fire but a newly-installed water heater might be to blame.

Firefighters were able to extinguish the flames and the Red Cross is working to help get the family back on their feet.

Meanwhile, Mr. Serpit has time to reflect upon his adventure. And, hey, he made certain the family was safe before he went back for his beer. 🙂 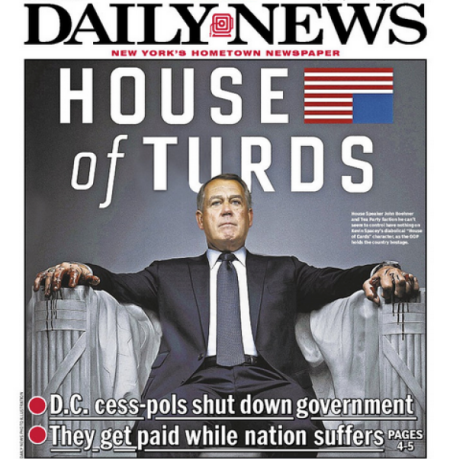 …How does one party that has lost two presidential elections and a Supreme Court case – as well as two Senate elections – think it has the right to shut down the entire government and destroy the full faith and credit of the United States Treasury to get its way on universal healthcare now? I see no quid pro quo even. Just pure blackmail, resting on understandable and predictable public concern whenever a major reform is enacted. But what has to be resisted is any idea that this is government or politics as usual. It is an attack on the governance and the constitutional order of the United States.

When ideologies become as calcified, as cocooned and as extremist as those galvanizing the GOP, the American system of government cannot work. But I fear this nullification of the last two elections is a deliberate attempt to ensure that the American system of government as we have known it cannot work. It cannot, must not work, in the mindset of these radicals, because they simply do not accept the legitimacy of a President and Congress of the opposing party. The GOP does not regard the president as merely wrong – but as illegitimate. Not misguided – illegitimate. This is not about ending Obamacare as such (although that is a preliminary scalp); it is about nullifying this presidency, the way the GOP attempted to nullify the last Democratic presidency by impeachment.

Except this time, of course, we cannot deny that race too is an added factor to the fathomless sense of entitlement felt among the GOP far right. You saw it in birtherism; in the Southern GOP’s constant outrageous claims of Obama’s alleged treason and alliance with Islamist enemies; in providing zero votes for a stimulus that was the only thing that prevented a global depression of far worse proportions; in the endless race-baiting from Fox News and the talk radio right. And in this racially-charged atmosphere, providing access to private healthcare insurance to the working poor is obviously the point of no return…

I regard this development as one of the more insidious and anti-constitutional acts of racist vandalism against the American republic in my adult lifetime. Those who keep talking as if there are two sides to this, when there are not, are as much a part of the vandalism as Ted Cruz. Obama has played punctiliously by the constitutional rules – two elections, one court case – while the GOP has decided that the rules are for dummies and suckers, and throws over the board game as soon as it looks as if it is going to lose by the rules as they have always applied.

…If we cave to their madness, we may unravel our system of government, something one might have thought conservatives would have opposed. Except these people are not conservatives. They’re vandals.

This time, the elephant must go down. And if possible, it must be so wounded it does not get up for a long time to come.

I agree. Too much work getting in winter’s firewood to spend on elaboration of my own. But, Andrew Sullivan says it well enough for now.

The silliness of TV Talking Heads blathering about middle ground and negotiations are as ignorant as ever. When half the proposed negotiations is illegal and refutation of our constitutional rights to democracy – the topic is moot. Ended. As over as Romney’s career as a national politician. 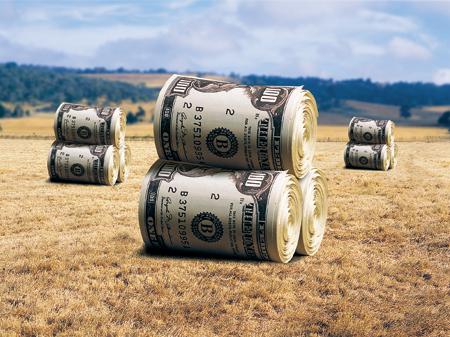 Overshadowed by the government shutdown, the U.S. farm subsidy law expired for the second time on Tuesday with lawmakers still deadlocked over how to confront cuts in food assistance programs for low-income Americans.

Analysts say Congress is more likely to revive the farm law for another year or two, the path it took when the law expired a year ago, than agree on a new bill.

“They don’t even have the process in place to get it done,” Agriculture Secretary Tom Vilsack said in a speech on Tuesday to United Fresh, a trade group for produce growers and processors.

The Democratic-run Senate has proposed $4.5 billion in loophole-closing for food stamps. The Republican-controlled House wants to cut $40 billion over 10 years through tighter eligibility rules that would disqualify 4 million people.