❝ A pastor facing life in prison for raping his 14-year-old daughter was shown mercy by a judge who was impressed by his alleged religious faith.

David Richards, 41, was sentenced to 12 years in jail on Thursday in Knox County Tennessee for raping his adoptive daughter – 60 years less than the maximum term sought by prosecutors. As he handed down the lenient sentence, Judge Steve Sword cited Richard’s work as a pastor and the Bible study he began in jail as mitigating factors…

❝ Richards was found guilty of rape, incest, and sexual battery by an authority figure for abusing his daughter, Amber Richards, for two years beginning when she was 14…

Throw away the key! 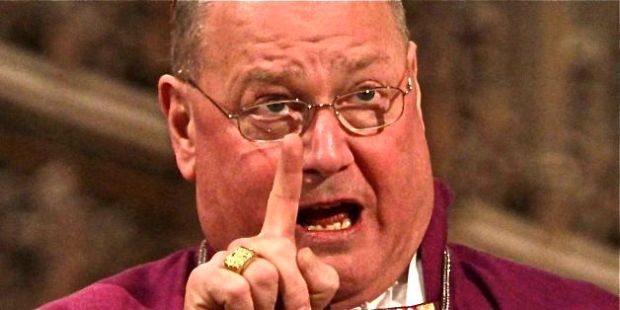 On your knees, sinners!

The news that New York Cardinal Timothy Dolan, the nation’s most prominent Catholic prelate, will deliver the closing blessing to the Republican National Convention in Florida next week was seen as a huge coup for Mitt Romney, the party’s presumptive nominee. But the move has also prompted a sharp debate within the church over the increasingly close ties between leading bishops and the GOP.

“The cozy relationship between a sizable portion of U.S. bishops and the Republican Party should be cause for concern, and not just among progressive Catholics,” Michael O’Loughlin wrote in a post on the website of America magazine, a leading Catholic weekly published by the Jesuits.

“Cardinal Dolan’s appearance in Tampa will damage the church’s ability to be a moral and legitimate voice for voiceless, as those who view the Catholic Church as being a shill for the GOP have just a bit more evidence to prove their case,” O’Loughlin concluded…

Similarly, David Cruz-Uribe, a member of the Secular Franciscan Order and a professor of mathematics at Trinity College, wrote on the Vox Nova blog that Dolan’s decision “will only drag the Church further into a partisan divide and fuel the perception (true or not) that the Catholic Church wants to replace the Episcopalians as the Republican party on its knees…”

Cripes. I haven’t read that phrase in years. Reminds me of no end of salacious jokes.

By tradition, the local bishop often delivers a prayer at the party convention meeting in his city, but it is highly unusual for another bishop — and the leader of the hierarchy — to fly in to deliver a benediction, as Dolan will do on Aug. 30, right after Romney is formally nominated…

Examine the range of issues – and positions on those issues – today’s Republican Party and the most reactionary elements of the Catholic Church hold in common. They share a war on Women – denying reproductive rights, abortion, birth control, IVF – even the papal edict against a woman choosing to abort to save her own life.

They oppose civil rights for the LGBT community. They demand that religious dogma and doctrine take precedence over civil law. All that may be missing from the podium that night is an appearance by one of those uppity nuns – gagged and in chains.

You want us to honor reproductive rights for who? — Flores, Ryan, Akin
Daylife/AP Photo used by permission

Even as the Republican establishment continued to call for Representative Todd Akin of Missouri to drop out of his Senate race because of his comments on rape and abortion, Republicans approved platform language on Tuesday calling for a constitutional amendment outlawing abortion with no explicit exceptions for cases of rape or incest.

The anti-abortion plank, approved by the Republican platform committee…was similar to the planks Republicans have included in their recent party platforms, which also called for a constitutional ban on abortions…

“Faithful to the ‘self-evident’ truths enshrined in the Declaration of Independence, we assert Blah, blah, blah…“We support a human life amendment to the Constitution and endorse legislation to make clear that the Fourteenth Amendment’s protections apply to unborn children.”

The timing of the approval of the Republican anti-abortion plank was awkward for Mitt Romney, who has denounced Mr. Akin’s comments about rape and abortion and who has said that he supports exceptions to allow abortions in cases of rape. And it comes as his selection of his running mate, Representative Paul D. Ryan of Wisconsin, was already drawing scrutiny for his support for a more absolute ban on abortions, even in cases of rape or incest…

The Republican platform committee waded into the abortion debate again later on Tuesday when it approved language opposing drugs like RU-486, which can terminate pregnancies. “We oppose approval of these drugs and similar drugs that terminate innocent human life after conception,” said Mary Summa, a delegate form North Carolina, who introduced a plank calling on the Food and Drug Administration not to approve such drugs…

The party also approved a plank supporting abstinence-only education, as it has in the past…“We renew our call for replacing “family planning” programs for teens with increased funding for abstinence education, which teaches abstinence until marriage as the responsible and expected standard of behavior.”

I’m not certain if the Republican Party would prefer to drag this nation back into the 19th Century – removing the voting franchise from women and non-whites – or take society all the way back to the 14th Century and simply get rid of all that stuff about voting and democracy altogether. Rule by kings and papal edict seemed to work well enough for the moneyed classes of the time and, after all, that is the only imperative for political rule in today’s Republican Party.

Cynthia Daily and her partner used a sperm donor to conceive a baby seven years ago, and they hoped that one day their son would get to know some of his half siblings — an extended family of sorts for modern times.

So Ms. Daily searched a Web-based registry for other children fathered by the same donor and helped to create an online group to track them. Over the years, she watched the number of children in her son’s group grow. And grow.

Today there are 150 children, all conceived with sperm from one donor, in this group of half siblings, and more are on the way. “It’s wild when we see them all together — they all look alike,” said Ms. Daily, 48, a social worker in the Washington area who sometimes vacations with other families in her son’s group.

As more women choose to have babies on their own, and the number of children born through artificial insemination increases, outsize groups of donor siblings are starting to appear. While Ms. Daily’s group is among the largest, many others comprising 50 or more half siblings are cropping up on Web sites and in chat groups, where sperm donors are tagged with unique identifying numbers.

Now, there is growing concern among parents, donors and medical experts about potential negative consequences of having so many children fathered by the same donors, including the possibility that genes for rare diseases could be spread more widely through the population. Some experts are even calling attention to the increased odds of accidental incest between half sisters and half brothers, who often live close to one another…

“These sperm banks are keeping donors anonymous, making women babies and making a lot of money. But nowhere in that formula is doing what’s right for the donor families…” Let’s don’t forget making it more difficult for the average neurotic to sue the donor.

Because there is so much secrecy surrounding sperm and egg donations, Wendy Kramer said, it has been difficult for families of children born via sperm donation to step forward with their concerns. Some heterosexual couples never tell a child that he or she is the product of a sperm donation…

Experts are not certain what it means to a child to discover that he or she is but one of 50 children — or even more. “Experts don’t talk about this when they counsel people dealing with infertility,” Ms. Kramer said. “How do you make connections with so many siblings? What does family mean to these children?”

And who cares? Maybe, just maybe, they’re mostly concerned with living their own lives instead of being part of a pseudo-science soap opera.

RTFA to consider the few tidbits of legitimate concern – awash with neurotic fear and trepidation lacking scientific measurement. Exactly the kind of tempest in a teacup that could keep a congressional committee – and some bible-thumping politician running for reelection – busy for an entire year.

Austrian Josef Fritzl, who imprisoned his daughter and fathered seven children with her, wanted to open his home to tourists for money, a family member says.

The Daily Telegraph reported Fritzl, 73, wanted to turn his Amstetten, Austria, home into a tourist attraction to raise money for his family.

His sister-in-law revealed Fritzl’s alleged plan in an interview with the Austrian tabloid Oesterreich.

“He actually wanted to make a tourist attraction out of his house with the dungeon where he kept Elisabeth, and charge 10 euros for entrance,” she said. “It is completely mad. The family was supposed to get the proceeds, but, naturally, all of them rejected his ‘business’ proposal.”

He should go into politics. Probably funded by Disney.

Through a conservative PAC.