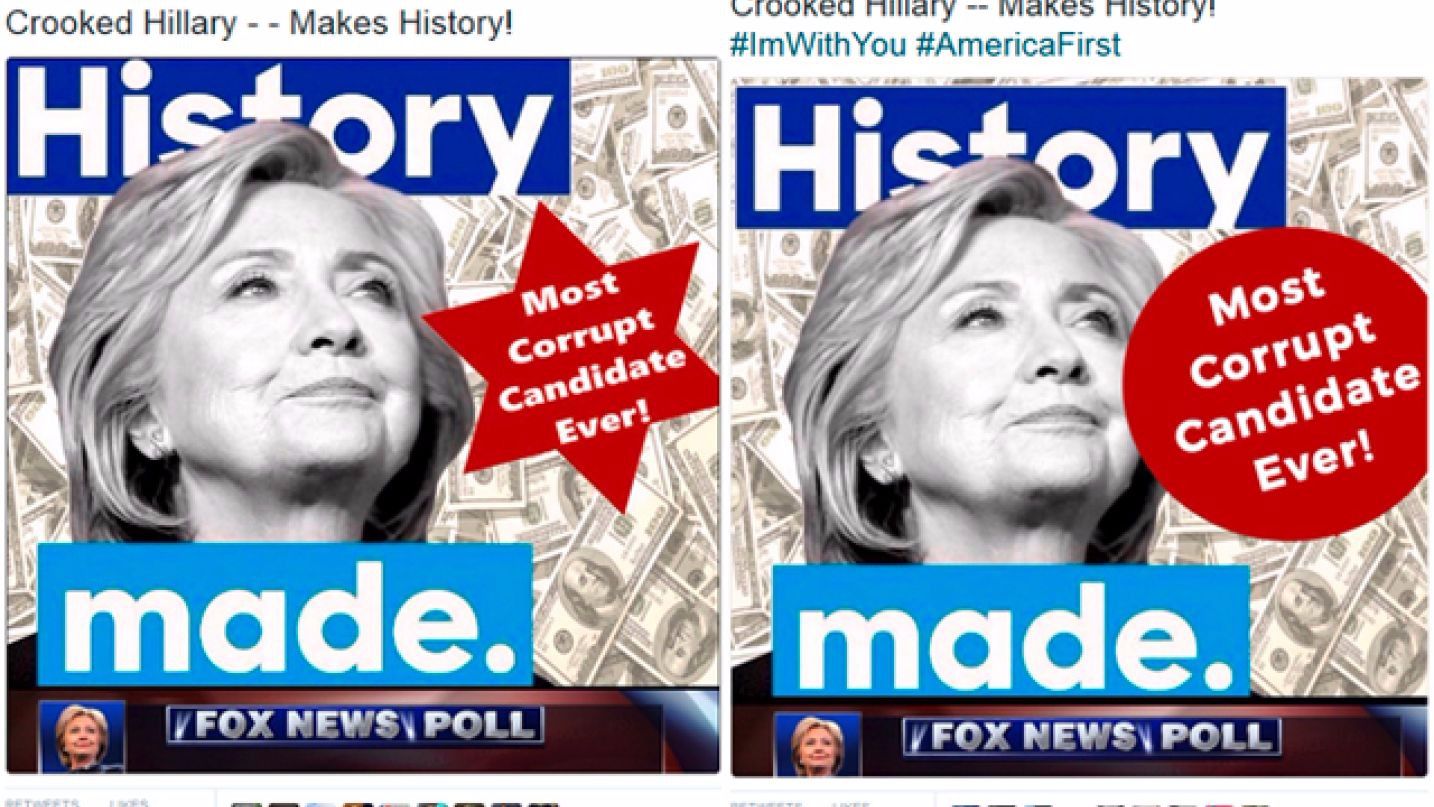 On Saturday, his campaign tweeted an image co-opting a graphic depicting Hillary Clinton proudly looking off into the distance with the words “History made” emblazoned across it. Except this version featured a background made entirely of money and prominently included what appeared to be a red Star of David with the words “Most Corrupt Candidate Ever!” written inside…

On Monday, however, Trump tweeted that he thought it was a sheriff’s star, blah, blah. Though he took down the original tweet [above, left] and replaced it with a circle around his blather [above, right] within 2 hours of original posting. Point’s already made. Every anti-semite in America already has access to a saved copy of the original.

The earliest iteration of the questionable picture seems to have come from the Twitter account @FishBoneHead1, which tweeted the image on June 15.

From there, the image found its way to 8chan, a gurgling cesspool on the Internet that is currently devoted to celebrating the death of Holocaust survivor Elie Wiesel. As Mic.com reported on Sunday, the image was posted there on June 22, featuring the file name HillHistory.jpg which could be a reference to the Neo-Nazi code “HH,” short for “Heil Hitler.”

The individual running the account seems proud of the work, tweeting at various news outlets to claim credit…

“We’ve been troubled by the anti-Semites and racists during this political season, and we’ve seen a number of so-called Trump supporters peddling some of the worst stereotypes all through this year,” Jonathan Greenblatt, the CEO and National Director of the Anti-Defamation League told The Daily Beast. Greenblatt said the organization would like to see Trump speak out against the individuals behind prejudiced images that permeate social media. “For those people who say that you can write this off, and that calling it out is simply political correctness, it’s crazy.”

You’d think that bigots and racists, the drivel wing of American conservatism might get explanations of political correctness sorted in their own writings. It was, after all, they that founded the concept — starting with the campaign to put GOD into everything from the Pledge to the American flag to our currency back in the 1940’s and 1950’s.

I lived through all of those discussions. Though it was clear at the time that Congressional-class cowards would never stand up against compromising our secular constitution. McCarthyism – the early version of Cruzism, Trumpism – was in charge of patriotic ideology. Even after the defeat of McCarthy and a half-assed resumption of the Bill of Rights, no Congress has ever had the guts to turn those public elements of our nation back to the originals.

An Arab man convicted in Israel of rape because he pretended he was a Jew when he had consensual sex with a Jewish woman has called the verdict racist. Sabbar Kashur, 30, was found guilty of “rape by deception” by the Israeli court and sentenced to 18 months in jail.

According to the complaint filed by the woman, the two met in a Jerusalem street in 2008 and had sex that day. When she discovered he was not Jewish, but an Arab, she went to the police.

Kashur was arrested and charged with rape and indecent assault, but the charges were later replaced by a different charge of “rape by deception”…

“If I were Jewish, they wouldn’t have even questioned me,” the Haaretz newspaper quoted him as saying.

“That’s not called rape, I didn’t rape her in the forest and and throw her away naked. She agreed to everything that happened…”

“The court is obliged to protect the public interest from sophisticated, smooth-tongued criminals who can deceive innocent victims at an unbearable price – the sanctity of their bodies and souls,” the court judgement was quoted as reading.

Can you imagine what would happen, say, if a German court convicted a Jew of “rape” if he lied when having sex with a German woman.

Oh. That’s right. They did. Under Hitler.

Congress dropped by in 1999 to advise on democracy

The two plaintiffs in the case, Dervo Sejdic who is of Roma origin and Jakob Finci who is Jewish, both prominent Romanian public figures, filed suit in 2006 claiming discrimination and a breach of their human rights.

According to the ruling, Finci inquired about running for parliament or the three-part presidency and was informed by Bosnia’s central electoral commission in 2007 that he was ineligible because he was a Jew.

The decision was based on a distinction made in the Bosnian constitution between two categories of citizen: “constituent peoples” — Bosniacs, Croats and Serbs — and “others”: Jews, Roma and other minorities.

Posts in the Bosnian parliament and its three-part presidency are reserved to the three so-called constituent peoples under the rules, which were intended to prevent ethnic strife in the wake of the 1992-95 war.

The court upheld both plaintiffs’ complaints, ruling that Bosnia had violated provisions of the European Convention on Human Rights prohibiting discrimination and upholding the right to free elections…

The Strasbourg rights court acknowledged that the constitution had pursued “the legitimate aim of restoring peace” and that the time was “perhaps still not ripe” for Bosnia to move from power-sharing to majority rule.

How screwed-up and incompetent is a national government that still fears democracy?

The questions before the judges in Courtroom No. 1 of Britain’s Supreme Court were as ancient and as complex as Judaism itself.

On the surface, the court was considering a straightforward challenge to the admissions policy of a Jewish high school in London. But the case, in which arguments concluded Oct. 30, has potential repercussions for thousands of other parochial schools across Britain. And in addressing issues at the heart of Jewish identity, it has exposed bitter divisions in Britain’s community of 300,000 or so Jews, pitting members of various Jewish denominations against one another…

By many standards, the JFS applicant, identified in court papers as “M,” is Jewish. But not in the eyes of the school, which defines Judaism under the Orthodox definition set out by Jonathan Sacks, chief rabbi of the United Hebrew Congregations of the Commonwealth. Because M’s mother converted in a progressive, not an Orthodox, synagogue, the school said, she was not a Jew — nor was her son. It turned down his application.

That would have been the end of it. But M’s family sued, saying that the school had discriminated against him. They lost, but the ruling was overturned by the Court of Appeal this summer.

In an explosive decision, the court concluded that basing school admissions on a classic test of Judaism — whether one’s mother is Jewish — was by definition discriminatory. Whether the rationale was “benign or malignant, theological or supremacist,” the court wrote, “makes it no less and no more unlawful.”

The case rested on whether the school’s test of Jewishness was based on religion, which would be legal, or on race or ethnicity, which would not. The court ruled that it was an ethnic test because it concerned the status of M’s mother rather than whether M considered himself Jewish and practiced Judaism.

“The requirement that if a pupil is to qualify for admission his mother must be Jewish, whether by descent or conversion, is a test of ethnicity which contravenes the Race Relations Act,” the court said. It added that while it was fair that Jewish schools should give preference to Jewish children, the admissions criteria must depend not on family ties, but “on faith, however defined.”

The same reasoning would apply to a Christian school that “refused to admit a child on the ground that, albeit practicing Christians, the child’s family were of Jewish origin,” the court said.

Even more to the root of the question is religions that consider their law superior to the law and legal system of the state. Unless you’re in a theocracy – when you can have bits of your body lopped off for offending some judge.

At least four students from a suburban St. Louis middle school face punishment for allegedly hitting Jewish classmates during what they called “Hit a Jew Day.”

District officials said Thursday they believe that fewer than 10 children of the district’s 35 Jewish students were struck.

District spokesman Paul Tandy said that in most cases, the students were hit on the back of their shoulders but one student was slapped in the face.

I hope school authorities look a little further and deeper. In my experience, 6th-graders don’t spontaneously invent ethnic hatred. One of those habits you pick up at home.

A Jewish school’s entry criteria did not racially discriminate against an 11-year-old boy that it refused to admit, the high court has ruled.

The JFS in north-west London rejected the boy, known as M, because his mother was not regarded as “an approved Jew“…

A child’s Jewish identity is inherited through the mother, but the US did not accept that M’s mother was Jewish. She was born a Roman Catholic, but converted to Judaism before her son’s birth, although not to the Orthodox movement.

UPDATED: Latest round of court decisions rule against the school, for the boy.