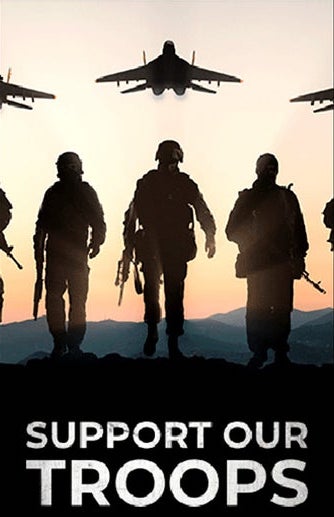 The Trump Make America Great Again committee, which serves as the fundraising arm of the president’s campaign, ran the offending digital ad for several days last week. It shows armed soldiers silhouetted below three fighter jets and above the words “Support our Troops”, with a link to donate to the group’s coffers.

However, according to an aeronautical engineer quoted by Politico, the planes flying overhead are Russian MiG-29s; one of the soldiers, meanwhile, carries an AK-47. The image is a stock photo taken from Shutterstock.

What? Did you think the nutballs working for the Fake President’s re-election were any smarter, less ignorant, than he is?

Mikhail Kalashnikov, the man who invented the AK-47 turned 90 on Tuesday….

At the Kremlin in a ceremony which honored his work, Kalashnikov received the award Hero of the Russian Federation. President Medvedev stated, “You’ve invented not only the famous Kalashnikov machine gun itself but also a national brand which every Russian, every citizen of our country is proud of”….

The name AK-47 came from the words Avtomat Kalashnikova and the model year, 1947. Kalashnikov invented the initial prototype of the AK-47 in the hospital during World War II when he was recovering from injuries sustained in battle. He was a Sergeant in the Soviet Army at the time, and invented it in response to the comment that Russian soldiers were using rifles to stand against German soldiers who has automatic weapons….

[Kalashnikov] stated at one time, “I created a weapon to defend the fatherland’s borders. It’s not my fault that it was sometimes used where it shouldn’t have been. This is the fault of politicians.”

Still the most durable all-rounder military assault rifle ever designed. The critter survives every kind of weather, climate and abuse – and keeps on ticking. Inexpensive to produce – which is why so many knock-offs. Lasts forever.

Works very well – even in the hands of the mentally and socially disturbed.