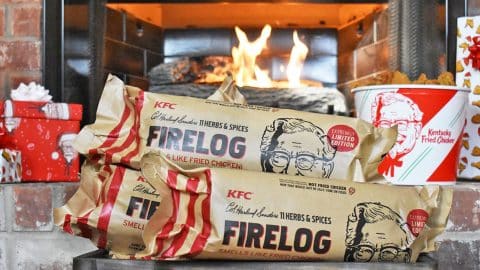 If you want to wake up to the popular aroma of fried chicken this Christmas morning, KFC has just what you need to fulfill all your needs. The famous fast-food chicken joint is selling individual firelogs that smell just like their fried chicken.

The KFC 11 Herbs & Spices Firelog is made with 100 percent recycled materials for starters. KFC excitedly proves that by burning this Firelog it is “dramatically less wasteful and significantly more effective at making your home smell like fried chicken than burning actual fried chicken.”

❝ Colonel Sanders is assembling a robot army. At a high-tech new KFC store in Shanghai, customers can order their fried chicken and mashed potatoes via voice-activated robot…

Named Dumi, the robot is sophisticated enough to handle order changes and substitutions, though according to the Nanfang “its makers admit the robot has trouble distinguishing between certain dialects and accents.”

❝ Robot order-takers aren’t the only advanced technology at this KFC store, which is located inside Shanghai’s National Exhibition and Convention Center. Customers can charge their mobile phones at wireless charging stations that also enable them to stream music, and pay for their meals via mobile payment services including Alipay and Baidu Wallet.

❝ China has been staffing its restaurants up with robots for years, with automatons capable of everything from making ramen to serving as waiters. Robot servers aren’t always all they’re cracked up to be, however: Some restaurants have recently come to terms with the fact that when it comes to actually serving customers, humans still reign supreme.

Journalists and editors are duty-bound to offer that last comment. After all, they’re on the list of trades maybe easier to replace with robots than waiters.

At least if they work for news-as-entertainment American mass media.

The company that owns KFC is trying to dispel rumors that it genetically modified its meat and manufactured an eight-legged, six-winged chicken to serve to customers.

Yum Brands, which owns China’s largest fried-chicken chain, said in a statement Monday that it has sued three companies there that have been spreading false rumors on social media — among them that the restaurant delivered maggot-infested food and created a deformed chicken. It wants $242,000 and an apology from all three defendants…

KFC, which has more than 4,600 restaurants in China, has been fighting for its reputation for years. In 2012, Chinese media outlets reported that a KFC supplier had been using growth hormones and antibiotics to grow larger chickens…The accusations spurred fears about the country’s food safety. Then last year, KFC, along with McDonald’s and Pizza Hut, had to apologize to customers after a supplier was caught on video violating safety regulations — picking up meat from the factory floor and tossing it into mixers and touching meat on the assembly line with bare hands. There were also complaints that the meat was expired.

“When I saw that, I said, ‘Uh-oh, here’s six to nine months of problems,’” Yum chief executive David Novak told investors at the time…

KFC’s China CEO Qu Cuirong said in a statement that it is difficult for companies to guard against falsehoods, because it’s hard to get evidence, the Associated Press reported. “But the stepped-up efforts by the government in recent years to purify the online environment, as well as some judicial interpretations, have offered us confidence and weapons,” she said.

Even though physical, scientific evidence is easy to produce – especially when accusers have nothing to offer other than “what-ifs” and “maybes” – you still run the risk of know-nothings simply picking up and running with the headlines from low-lifes pretending to be investigative journalists.

We all know a few folks who will believe those headlines because it fits their view of the world around them.

A Chinese man reportedly tried to smuggle his pet turtle past security at the Guangzhou Baiyun International Airport in Guangdong, China by hiding it in a Kentucky Fried Chicken hamburger.

The man, whose last name is Li, was on his way to board a China Southern Airlines flight to Beijing when he was stopped during the x-ray screening at the airport over an “odd protrusion” that was sticking out of a KFC burger inside his bag…

“There’s no turtle in there, just a hamburger,” the man allegedly told authorities. “There’s nothing special to see inside.”

Once airport officials found the turtle and confronted Li, he explained that he just wanted to travel with his “beloved” turtle.

After airport authorities told the man he was not allowed to smuggle animals into planes he reportedly decided to leave his turtle with a friend while he traveled.

Is there any way to turn this into a joke, like – “Are you glad to see me or is that a turtle in your hamburger?”

The fried-chicken restaurant chain KFC has halted operations in Fiji, amid a row over imports of the ingredients to make its flavoured crumb coating.

The multinational said Fiji’s military government had stopped it from importing herbs, milk and eggs. Fijian officials said two cartons of eggs and milk had been delayed because KFC needed to provide documentation…

“The onus is on KFC to provide us with a simple veterinary certificate, that is all we ask,” he said…

The firm, which has three restaurants in Fiji, said the import problems coupled with rising food prices had made it impossible to make a profit…

“We have been waiting for the veterinary certificate since early May [2011]. When this is provided, we’ll be able to release the cartons.”

What? Do they need certification for which bird laid the eggs?

Want a junk food fix, but fear losing your sophisticated edge? Erik Trinidad’s blog fancyfastfood.com has the answer. With the honest tag line, “Yeah, it’s still bad for you – but see how good it can look!”, Trinidad transforms convenience food into gourmet creations.

Inspired by childhood games with his brother, when the pair competed to restyle dishes at Chinese buffets, the blog showcases his makeovers with Domino’s pizza turned into Dao Mi Noh Chow Mein (with soy sauce produced by reducing cola), a sushi platter constructed from chicken shop purchases, and a Big Mac given a new life as steak and chips.

Trinidad says it’s a protest against “foodie” culture and self-important diners at swanky restaurants. Cheaper chains should take note: there may be a fast buck in downturn dining.

My favorite example? Turning a Burger King Croissan’wich and a Biscuit Meal into a BK Quiche. Har!