“Big protest in D.C. on January 6th,” Donald Trump tweeted before Christmas. “Be there, will be wild!” On New Year’s Day, he tweeted again: “The BIG Protest Rally in Washington, D.C. will take place at 11:00 A.M. on January 6th.” On January 5th: “I will be speaking at the SAVE AMERICA RALLY tomorrow on the Ellipse at 11AM Eastern. Arrive early—doors open at 7AM Eastern. BIG CROWDS!” The posters called it the “Save America March.” What happened that day was big, and it was wild. If it began as a protest and a rally and a march, it ended as something altogether different. But what? Sedition, treason, a failed revolution, an attempted coup? And what will it be called, looking back? A day of anarchy? The end of America?

Trump called the people who violently attacked and briefly seized the U.S. Capitol building in order to overturn a Presidential election “patriots”; President-elect Joe Biden called them “terrorists.” In a section of “Leviathan” called “Inconstant Names,” Thomas Hobbes, in 1651, remarked that the names of things are variable, “For one man calleth Wisdome, what another calleth Feare; and one Cruelty, what another Justice.” On the other hand, sometimes one man is right (those people were terrorists). And, sometimes, what to call a thing seems plain. “This is what the President has caused today, this insurrection,” Mitt Romney, fleeing the Senate chamber, told a Times reporter.

“Insurrection” seems perfectly appropriate to me. The discussion seems endless…sometimes. Folks responsible for that quality of discussion are guilty of making the event seem irrelevant.

For what it’s worth, I think any and all of the crimes committed in Washington, DC, should be prosecuted. Not just the one day’s worth.

On Saturday, addressing the biggest annual gathering of US grassroots conservatives, Trump wondered aloud at it being “sort of a miracle” he has got so much done despite all he’s been through.

“Maybe it’s right there, right?” he asked, pointing to the heavens. “Thank you, God.”

The crowd loved it. Trump stayed away from a sceptical Conservative Political Action Conference in 2016 but now he is its sun king. Supporters in a palatial ballroom at the National Harbour leaped to their feet, whooping and cheering, many wearing “Make America great again” and “Keep America great” caps.

They roared their approval when, like a medieval monarch who has survived a bloody insurrection, Trump vowed revenge.

“They’re coming after me and we fight them back,” he said. “And now we’re going after them because we have no choice. We have to straighten out our country. But despite the best efforts of the leftwing fanatics, their scams, schemes, slanders, they’ve all been discredited, totally discredited.”…

In a characteristically rambling monologue, he seemed genuinely unable to comprehend how teenage climate activist Greta Thunberg beat him to the precious title of Time magazine person of the year.

But he finished his speech by hugging and kissing the flag – a familiar move which elicited a huge cheer from his devoted subjects.

You can assume the audience bent over to give their all to Il Duce. 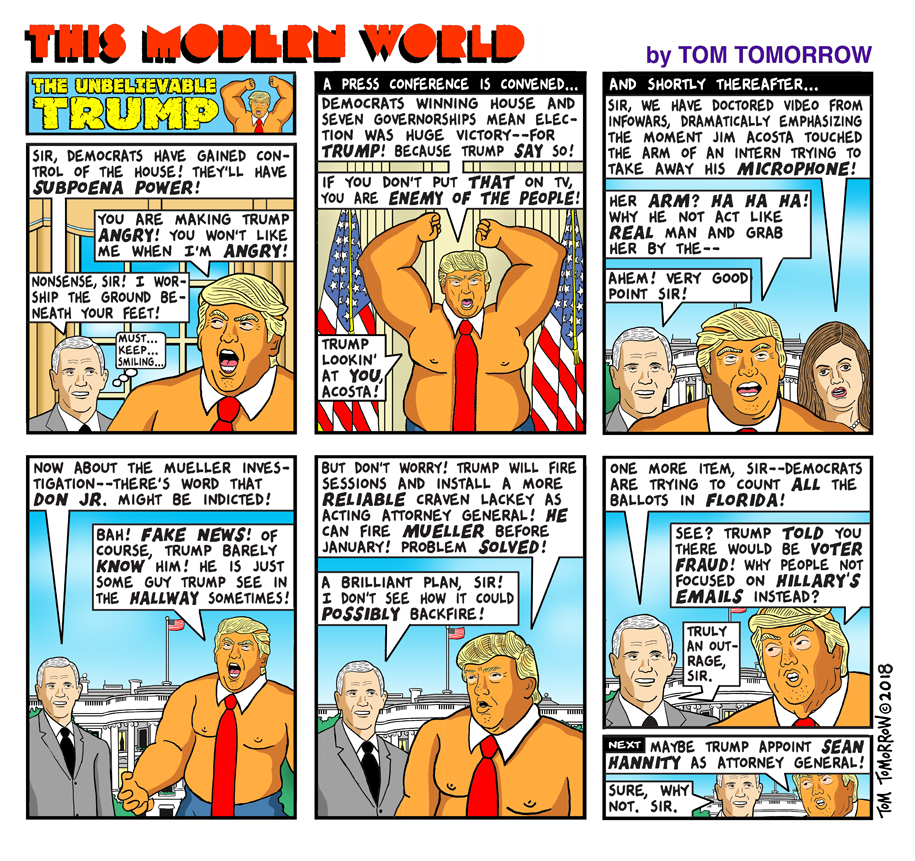