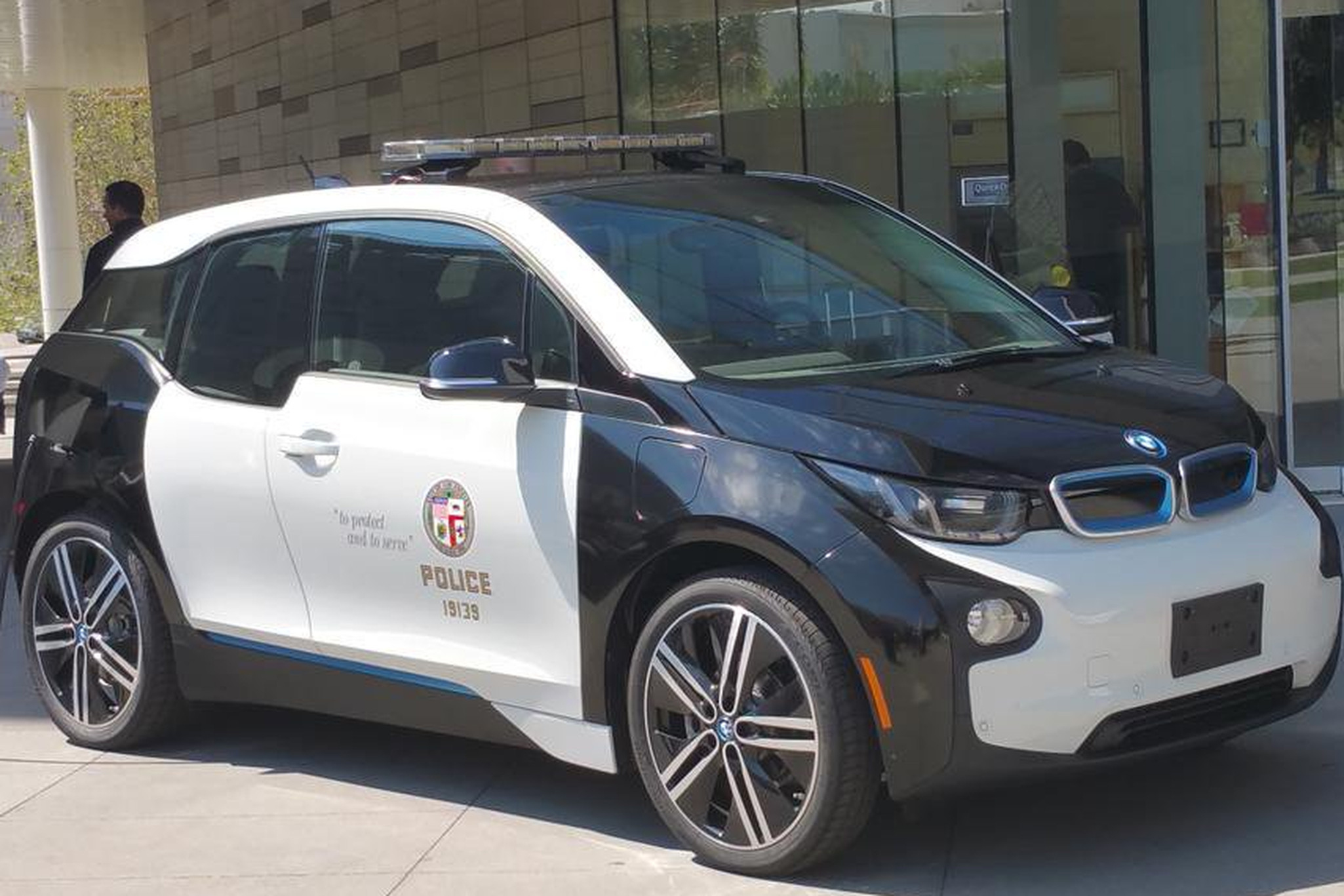 ❝ BMW announced…that it has won a contract with the Los Angeles Police Department to supply 100 of its compact i3 electric cars. The initiative is a part of LA’s “Sustainable City pLAn,” which includes a commitment to make half of its light-duty vehicle purchases fully electric by 2017. The i3s will be used in a “non-emergency” capacity — in other words, you won’t likely see them engaged in high-speed police chases, but rather for basic department transportation needs and community outreach.

❝ LAPD’s move comes after a trial period where it pitted an i3 against a Tesla Model S P85D. The P85D is larger and much quicker, but overall cost may have factored into the decision — i3s start at just over $42,000, while the P90D (the P85D has since been discontinued) has a base price over $100,000. BMW cites the i3’s efficiency, reliability, connected car capabilities…and its network of service centers as reasons for securing the winning bid, but it’s also possible that BMW gave the department a nice fleet discount…

❝ Of course, when you deploy a fleet of EVs, you need a way to charge them. LAPD is working with EV charger management company Greenlots to make that happen, installing 100 Level 2 chargers and four DC Fast Charge stations, which can charge a depleted i3 to 80 percent in half an hour or less.

The Los Angeles Police Department’s mental evaluation unit is the largest mental health policing program of its kind in the nation, with 61 sworn officers and 28 mental health workers from the county…

Triage duty involves helping cops on the scene evaluate and deal with people who may be experiencing a mental health crisis.

The triage officers are first and foremost a resource for street cops. Part of their job entails deciding which calls warrant an in-person visit from the unit’s 18 cop-clinician teams. These teams, which operate as second responders to the scene, assisted patrol officers in more than 4,700 calls last year.

Sometimes their work involves high-profile interventions, such as helping S.W.A.T. teams with dangerous standoffs or talking a jumper off a ledge. But on most days it involves relieving patrol officers of time-consuming mental health calls…

That’s the right approach, says Peter Eliasberg, legal director at the American Civil Liberties Union of Southern California. “The goal is to make sure that people who are mentally ill, who are not a danger to the community, are moved towards getting treatment and services as opposed to getting booked and taken into the jail.”

Detective Charles Dempsey is in charge of training for LAPD’s mental evaluation unit. He says pairing a cop or detective with a county mental health worker means the two can discuss both the criminal justice records that the health worker isn’t privy to and the medical records that a cop can’t access because of privacy laws.

About two-thirds of the calls are resolved successfully, he says…

But there are complicated cases, too. And these, Dempsey says, are assigned to the unit’s detective-clinician teams. Dempsey says most of the 700 cases they handled last year involved both people whose mental illness leads them to heavily use or abuse emergency services, or who are at the greatest risk for violent encounters with police and others.

“Jails were not set up to be treatment facilities,” says Mark Gale, who serves as criminal justice chairman for the LA County Council of the National Alliance on Mental Illness. “People get worse in jail.”

Gale and other mental health advocates praise the LAPD unit’s approach and call it a good first step. But for diversion to work well, they say, the city and county need to provide treatment programs at each point a mentally ill person comes into contact with the criminal justice system — from interactions with cops all the way through the courts.

Of course, there used to be a system that provided much of this treatment – The US Public Health Service and a chain of national PHS hospitals across the country. Ronald Reagan did his level best to close them all down. He didn’t get all of them – but, he did succeed in evicting tens of thousands of mentally ill patients and putting them out on the streets.

RTFA for anecdotal examples of the work being done by the LAPD.

Four Los Angeles police officers are under scrutiny after one Tasered a handcuffed woman while joking with others at the scene, according to interviews and law enforcement records.

The video taken of the December 2010 arrest shows Officer Jorge Santander firing the Taser without warning and later displaying a Superman logo he wore on his chest beneath his uniform, according to records. Off camera, another officer is heard laughing and singing.

Santander then appeared to lie about the incident repeatedly in written reports. The three other officers who witnessed him stun the woman corroborated his version of events when first questioned and failed to tell supervisors that a video of the encounter existed, records show.

According to a memo written by a prosecutor in the Los Angeles County district attorney’s office, the incident began when two officers, Steven Bauman and Jose Lepe, were dispatched to a parking lot behind a Hollywood nightclub around 1:30 a.m. on Dec. 4, 2010, when a couple reported a drunk woman inside their car…

The officers requested a female officer be sent to assist, which is when Santander arrived with his partner, Georgeta Buruiana, who searched the woman, records showed. For reasons not explained in a D.A. memo of the event, Santander and Buruiana would transport the woman to a nearby station for booking.

Bauman had turned on a personal video camera and focused it on Santander and Buruiana as they led the woman over to their patrol car. She resisted getting in — something she had also done when Lepe tried to seat her in the back of his patrol car.

As before, officers shoved the woman into the seat, but she managed to stand back up. Without warning, Santander placed a Taser against the woman’s torso and fired it twice, according to the prosecutor’s account of the video. The woman fell face-down onto the seat…

When a sergeant arrived at the scene, Bauman turned off the camera. Santander told the supervisor simply that he had used the Taser on the woman twice because she had kicked him and had tried to kick out the windows of the patrol car. The three other officers corroborated that version of the encounter and none mentioned Bauman’s video, the memo said.

Sometime later in the day, Santander wrote an account of firing his Taser for the woman’s arrest report. In it he said he had fired the Taser only twice and warned the woman that she would be stunned before firing the Taser the first time. He also alleged that she had kicked him in the chest with such force that she knocked him off balance. Both claims — about the warning and being knocked off balance — were proven false by the video, the prosecutor wrote.

So, what does Protect and Serve mean to cops who taser someone in handcuffs? Folks wonder why many have pressed for civilian review boards for decades – while police departments continue the same crap coverups.

No one investigated any of this until the patrolman who records the incident asked an officer higher up if he had seen the recording, yet. The officer didn’t know what he was talking about.

A cache of Los Angeles Police Department submachine guns and handguns was stolen last week from a secured building used by the department’s SWAT unit, raising fears that the weapons, which police had altered to fire only blanks, could be converted back to lethal use, police officials confirmed…

Members of the SWAT unit, which specializes in hostage rescues and other high-risk situations, were scheduled to train at the facility Thursday, Downing said. A police officer arriving at the building around 9 a.m. Thursday discovered the weapons were missing, according to Downing. The officer also found electrical equipment stacked near a back door, indicating the burglars may still have been working and fled when the officer arrived.

Downing said the building, although not a guarded LAPD facility, was considered secure. To get to the weapons, the thieves cut through bolt locks on an outside door and two internal doors and forced their way through a metal roll gate, he said.

“I guess ‘secure’ is all relative now,” he said. “It’s embarrassing…. It’s a lesson learned…”

The building, which once housed textile companies, was donated to the department. Inside, the department put up walls and made other changes in order to create realistic scenarios for training exercises. They did not install an alarm system or surveillance cameras…

The obvious concern is that whoever stole the weapons will convert them from firing blanks to using live ammunition. Downing acknowledged that was “definitely a possibility” but said that to do so would require an understanding of the inner workings of the weapons.

Gun experts and online tutorials suggest, however, that the process is relatively simple and requires only a few parts. The company that manufactures the conversion kits used by the LAPD has an instructional video on its website that walks a viewer through the steps of returning an MP-5 to its original form in about five minutes.

Har. There’s a certain level of being “important” which conveys to some a conviction that they are untouchable. Who would dare to challenge their superior status not only in the community at large; but, among police officers.

So, you get careless.

A jury awarded a pair of Los Angeles police officers $2 million Monday after determining that LAPD supervisors had retaliated against the officers for complaining about alleged traffic ticket quotas.

Howard Chan and David Benioff, both veteran motorcycle officers with the department’s West Traffic Division, sued the department in 2009, alleging that they had been punished with bogus performance reviews, threats of reassignment and other forms of harassment after objecting to demands from commanding officers that they write a certain number of tickets each day, according to the suit.

Ticket quotas are illegal under state law, since they can pressure police to write spurious tickets to meet the goal. The line between setting a quota and pushing officers to increase their productivity is a delicate one for field supervisors, who are often under pressure themselves to generate more citations.

“We’re very hopeful that this will put an end to fleecing motorists on the west side of Los Angeles,” said Benioff’s attorney, Gregory Smith. “Quotas are a direct violation of the vehicle code, and this case was about these officers being asked to break the law…”

Chan and Benioff said that supervisors ranked them against other officers based on the number of tickets they wrote and cars they impounded, which is also a violation of state law…

“You can’t violate the law to enforce the law,” Councilman Dennis Zine said. “You can’t mandate the number of tickets.

Illicit, illegal policies by police departments are all too common. Hardly any driver in the U.S. is ignorant of some local speed trap – or something like my favorite sleazy local practice of bumping up demands for tickets at the end of the fiscal year to balance the budget.

Here are a couple of conscientious coppers who lead a dangerous life as it is on the streets of L.A. – with the integrity to refuse to spend their time harassing ordinary motorists over comparatively minor offenses. So, they get their chops busted by desk jockeys.