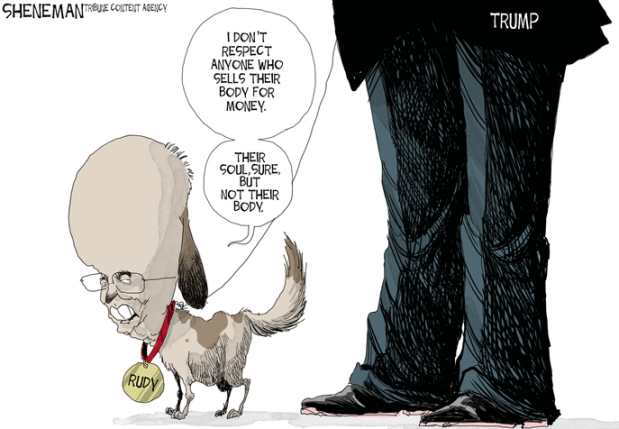 “You big mug – give me a kiss!”
Daylife/Getty Images used by permission

Extracts of a phone conversation between Tony Blair and George Bush a few days before the invasion of Iraq must be disclosed, a tribunal has ruled.

The Foreign Office lost an appeal against an order by the information commissioner, Christopher Graham, to disclose records of the conversation between the two leaders on 12 March 2003. Graham’s order was made in response to a freedom of information request by Stephen Plowden, a private individual who demanded disclosure of the entire record of the conversation.

“Accountability for the decision to take military action against another country is paramount,” Graham had said in his original order.

Upholding that ruling on Monday, Judge John Angel, president of the information tribunal, said Foreign Office witnesses had downplayed the importance of a decision to go to war, a view the tribunal found “difficult to accept”.

The tribunal added: “Also in our view, particularly from the evidence in this case, the circumstances surrounding a decision by a UK government to go to war with another country is always likely to be of very significant public interest, even more so with the consequences of this war.”

It said parts of the phone call between Blair and Bush recording what the former British prime minister said must be disclosed. The two men are believed to have discussed UN resolutions on Iraq and a television interview given by Jacques Chirac, then French president, on 10 March 2003. Blair repeatedly blamed Chirac for the failure to get a second UN security council resolution backing an invasion of Iraq…

Angus Lapsley, a Foreign Office official responsible for US-UK relations, argued against disclosure on the grounds that Britain had “a uniquely close and privileged relationship with the US“. He added that there was “no comparator” in terms of the “breadth and depth” of the UK’s relationship with the US, which was vital to Britain’s national interests.

That’s a long and incredibly polite redefinition of the word “lapdog”.

As criminal as were the decisions made by George W. Bush and Dick Cheney to invade Iraq – the Yes Man routine played to the hilt by Tony Blair was a significant asset to the whole despicable venture.

Solicitor General Elena Kagan was easily confirmed today as the next associate justice of the U.S. Supreme Court, completing the 50-year-old native New Yorker’s climb to the peak of the American legal profession.

The 63-37 vote was more than enough to blunt any possibility of a last-minute Republican delay or filibuster. Opposition during three days of Senate floor debate was relatively subdued…

Democrats argued that Kagan possesses the intelligence and professional background necessary to be a force on the high court. They said they hope she will help counter what many on the left contend are excessively conservative court rulings that defy the will of Congress while hurting individual workers and voters…

Conservative opposition to Kagan failed to resonate this election year, a stark contrast to the heated Supreme Court confirmation battles of John Roberts and Samuel Alito in 2005. Television and radio ads from advocacy groups were few, and serious grassroots outrage never materialized.

Kagan was born in Manhattan in 1960, one of three children of a lawyer father and schoolteacher mother. She graduated from Harvard Law School and served in a prestigious Supreme Court clerkship with the late Justice Thurgood Marshall.

Among the cases she will confront in her first term beginning in October will be disputes over protests at military funerals, state bans on violent video games, and the death penalty. High-profile appeals that may reach the court in the next couple of years include Arizona’s sweeping immigration reform law and California’s ban on same-sex marriage.

Republicans will continue to count on the conservative majority on the Supreme Court to play their lapdog role in opposition to any progressive advances in American law.