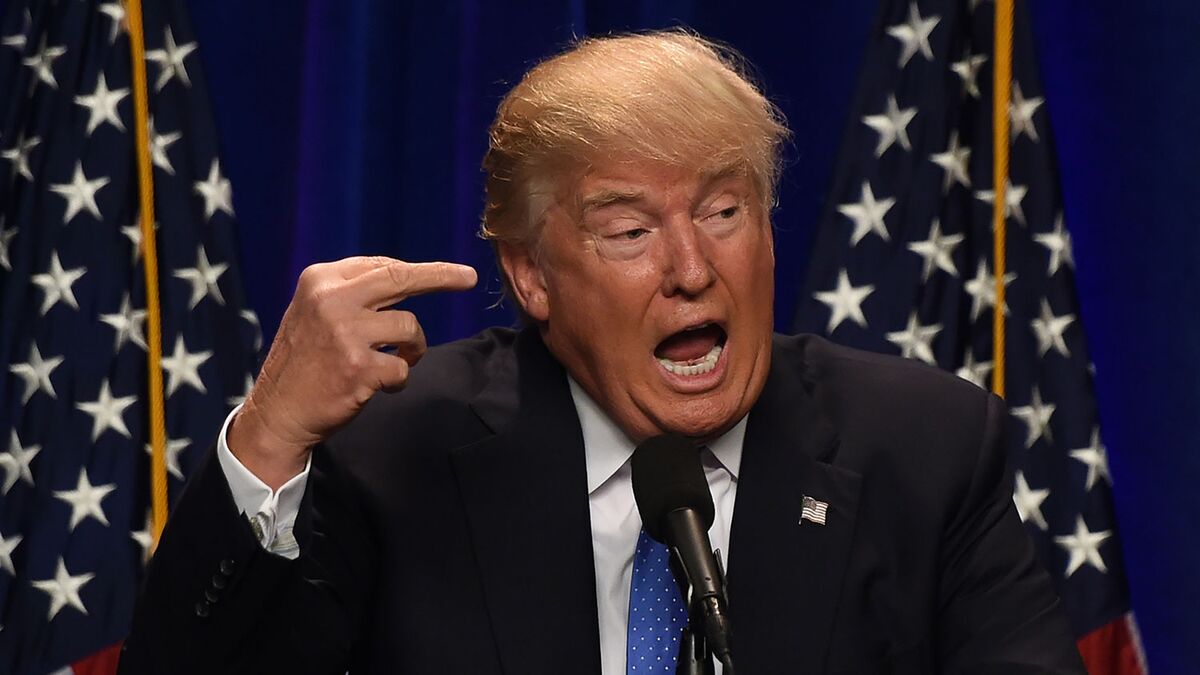 ❝ More than 100 technology leaders signed a letter naming Donald Trump a “disaster for innovation,” saying his views on immigration, internet security and government investment would stifle the technology industry and divide the nation.

❝ Twitter co-founder Ev Williams, Box Chief Executive Officer Aaron Levie, EBay founder Pierre Omidyar, Qualcomm’s Irwin and Paul Jacobs, and venture capitalist Vinod Khosla were among company founders, investors and employees that endorsed the letter written by Katie Jacobs Stanton, former vice president of global media at Twitter and a former special adviser on innovation at the U.S. State Department. The values of diversity, an open exchange of ideas and regard for legal and political institutions are under threat from a potential Trump presidency, according to the letter…

Here’s a link to the letter.

❝ While Republican candidates usually gain strong financial support through campaign donations, those in the technology industry have contributed $3 million to Democrat Hillary Clinton’s presidential effort compared with $31,000 for Trump, according to Crowdpac, a startup that tracks money in politics. The industry has donated a total of $10 million to presidential campaigns and super-political action committees thus far in the election cycle, according to the data.

The same link to the letter also lists who was involved in producing this letter.

A bipartisan group of senators is asking President Barack Obama to change the current “insensitive” policy of not sending condolence letters to families of service members who commit suicide.

A letter signed by 11 senators — 10 Democrats and one Republican — urges the president to “take immediate steps to reverse the long-standing policy of withholding presidential letters of condolence” to families of troops who killed themselves.

The policy, which goes back several presidents, has been the subject of protest by military families. CNN first reported in 2009 about the family of Spc. Chancellor Keesling, who killed himself while serving in Iraq.

The family set up a wall to pay tribute to Keesling in their Indiana home. Along with his uniform and the flag from his burial service, a space was left for the expected condolence letter from the commander in chief. It never arrived.

Upset when they learned a suicide did not merit a letter from the president, Keesling’s father, Gregg, wrote to the president and the Army chief of staff requesting the policy be changed.

At the time, a White House spokesman said the administration was reviewing the “inherited” policy.

Keesling has argued that his son’s suicide was a result of what he was exposed to during war and deserves to be considered caused by battle. The letter never arrived.

The letter to the president this week seeks again to reverse the policy. The senators note that the Pentagon has worked hard to try to eliminate the stigma of mental health injuries and to lower the suicide rate…

“Unfortunately, perpetuating a policy that denies condolence letters to families of service members who die by suicide only serves to reinforce this stigma by overshadowing the contributions of an individual’s life with the unfortunate nature of his or her death,” the letter says. “It is simply unacceptable for the United States to be sending the message to these families that somehow their loved ones’ sacrifices are less important.”

It doesn’t seem to matter if our leader in the White House is a compassionate conservative or a compassionate liberal – there hasn’t been anyone in that office with common sense or compassion enough to care about the families of someone whose death took place while toiling for this nation as a member of the American military.

Last time I experienced the death by suicide of someone I worked with it was defined by a construction job – and the dude who walked away from life was the foreman. We had in fact discussed the broader concept of suicide and when someone might feel it an appropriate alternative to carrying on. The point remains that – after his death – there wasn’t a worker on that job who didn’t participate in some manner of condolences to friends and family for their loss.

It takes some kind of barbaric reasoning to inflict further loss upon those who were close to someone who felt they needed to take their life.

A group of retired Communist Party officials and intellectuals have issued an unusually blunt demand for total press freedom in China, stating that the current regime of censorship and government control of the press violates China’s constitution and debases the government’s claim to represent its citizens.

The document’s 23 signers, including academics and former executives of China’s state-controlled media, have no public influence on the nation’s ruling coalition of Communist leaders. Some of them have issued other public demands for reform in past years, to no effect…

Their letter’s unvarnished language was notable for including an undisguised attack on the legality of censorship by the party’s Central Propaganda Department, which ultimately controls much of what is published, broadcast or posted on the Internet here…

The writers’ “core demand,” they stated, was that China’s ineffectual legislature, the National People’s Congress, dismantle censorship procedures “in favor of a system of legal responsibility” for items that are freely published…

The letter also refers to recent statements by Premier Wen, including an interview with the CNN, which suggest that the nation’s economic progress may be squandered unless the political system is further reformed. At one point, the letter notes that even those comments have been censored inside China, and that official reports on his remarks include only his statements on topics that do not involve reform.

“Of course, from our perspective the letter in a way is reacting to Premier Wen’s calls,” one signer, Jiang Ping, the former president of the China University of Political Science and Law, said in a telephone interview. “But whether the things we are calling for are consistent with what he has in mind, I don’t know.

“The reason I signed my name to this open letter is that it’s high time now we should have reform of the political system. The key element of this reform is freedom of speech, And I think now is the time to seek these reforms.”

Bravo! The course of commerce and civil liberties have been separated during the political struggle bringing China from the days of feudalism to a system dedicated to building a market-based economy responding to socialist ethics – the two course of those rivers must be joined.

It’s time for an Age of Reason in Chinese history. Of course, that’s a quality still essentially absent here in the United States; but, we get to discuss it openly.

Dozens of Italian women who have had relationships with Roman Catholic priests or lay monks have endorsed an open letter to the pope that calls for the abolition of the celibacy rule. The letter, thought by one signatory to be unprecedented, argues that a priest “needs to live with his fellow human beings, experience feelings, love and be loved”.

It also pleads for understanding of those who “live out in secrecy those few moments the priest manages to grant [us] and experience on a daily basis the doubts, fears and insecurities of our men”.

The issue was put back on the Vatican’s agenda in March when one of Pope Benedict’s senior advisers, Cardinal Christoph Schönborn, the archbishop of Vienna, said the abolition of the celibacy rule might curb sex abuse by priests, a suggestion he hastily withdrew after Benedict spoke up for “the principle of holy celibacy”.

The authors of the letter said they decided to come into the open after hearing his retort, which they said was an affirmation of “the holiness of something that is not holy” but a man-made rule. There are many instances of married priests in the early centuries of Christianity. Today, priests who follow the eastern Catholic rites can be married, as can those who married before converting to Roman Catholicism from Anglicanism.

One signatory, Stefania Salomone, 42, an office manager, said the message to the pope had been endorsed by nearly 40 women registered with an online forum linked to Il Dialogo website. But such was the sensitivity of the issue that only three had published their names…

My family walked away from the Roman Catholic church almost 70 years ago – over the question of freedom to access means of birth control. I think it unlikely that the church is ready to engage intelligent dialogue on an even more demanding subject.

Living in the 21st Century, peering backwards at an ideology, superstition, rooted to the Dark Ages like a tumor clinging to an organ it has already sucked dry of life – I hardly see any reason for this attempt at dialogue except to illustrate the unwillingness of Papal princes to learn and grow into the real world.

Microsoft says it made an accounting error when it laid off some employees last month and now feels the best way to correct the error is with what will likely add up to a public relations blunder.

The software giant, which recently laid off 1,400 employees, sent letters (see image below) this week to some of those former workers letting them know that their severance payouts were a bit too “generous” and respectfully requested that the former employees pay back that money, according to a report Saturday on TechCrunch.

“An inadvertent administrative error occurred that resulted in an overpayment in severance pay by Microsoft,” the letter states. “We ask that you repay the overpayment and sincerely apologize for any inconvenience to you.”

A Microsoft spokesperson confirmed that the authenticity of a letter posted on TechCrunch, but declined further comment, saying it was “a private matter between the company and the affected people.”

There are veiled threats, of course. How else would you expect Microsoft to deal with their own mistake?

The European Union wrote a letter to the new U.S. president calling for an era of closer cooperation in tackling issues of global importance.

The six-page draft letter addressed to “Dear Mr. President” will remain sealed from public view until the recipient is known after Tuesday’s election. The overriding theme of the document is multilateralism…

“I think both candidates are looking toward Europe and have shown an interest in Europe. They want to see the two shores of the Atlantic working together,” said French Foreign Minister Bernard Kouchner, who described the letter to reporters.

“It is important to work where we have shown leadership and offer this leadership to the United States,” EU External Relations Commissioner Benita Ferrero-Waldner said, citing relations with Georgia and eastern Europe…

“There is life after the American elections,” EU foreign policy chief Javier Solana said. “What is important is to see how we can work together.”

I believe even John McCain – if free from his neocon handlers – would agree with this. Unfortunately, that’s not how the Republican Party works, anymore.

I doubt if anyone fears an extension of American unilateralism, Bush-style, from Barack Obama. Still, I know I’ll find no shortage of events and actions to criticize in an Obama government when it comes to foreign policy. The United States inherited the mantle of imperialism from the Brits with open arms at the start of the Cold War. Not likely to be sloughed-off easily – or soon.

Every family with kids aged under 12 will get a letter this month telling them if their child is overweight.

But pussy-footing ministers have banned health trusts from using any word or phrase which might “shut people down”.

Instead they must use the words underweight, healthy, overweight or very overweight.

If they’re not willing to face reality by using the correct medical terminology, why not just send all the parents bumper stickers which read, “God loves me just the way I am”? And would somebody explain to me how being told I am “very overweight” is going to make me feel better than being told that I am “obese”?