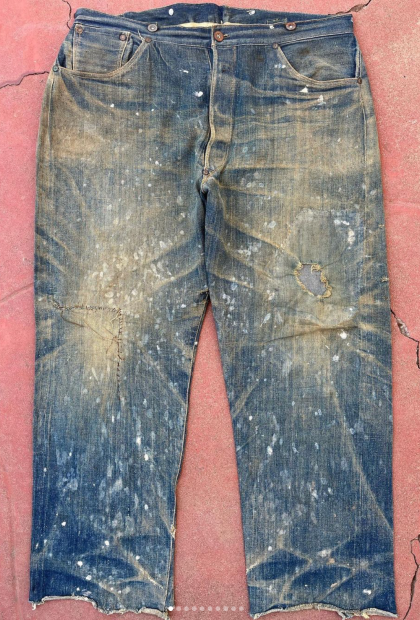 A pair of vintage Levi’s jeans from the 1880s sold for $76,000 at an auction in New Mexico, the Wall Street Journal reported on Tuesday.

Kyle Haupert, a 23-year-old vintage clothing dealer from San Diego, bought the pants at an auction on October 1.

“I’m still kind of bewildered, just surprised in myself for even purchasing them,” Haupert told the Journal…

The antique jeans were found in an old mine years ago, according to Long John, a denim magazine that first broke the news about the winning bid. They were used by a miner and feature suspender buttons on the waistbands and a single back pocket. The pants are marked by candle wax.

According to their auction listing, the jeans are one of the oldest known Levis from the gold rush era and “the holy grail of vintage denim collecting.” The pants are in “good/wearable” condition, per the listing.

“You could wear them to a Starbucks,” Stevenson told the Journal.

A man who rigged a booby trap in his home to protect himself from intruders killed himself this week when he triggered it by accident.

Surete du Quebec officers said 75-year-old Jos Lawrence Potvin of Levis, a suburb south of Quebec City, died when he accidentally pulled a string running along the floor of the entrance to his bedroom that was attached to the trigger of a rifle.

Police found his body inside his trailer home Thursday morning. Suicide was ruled out.

A hunter, Potvin lived alone and had complained to police in the past that people were trying to rob him, although police could not find any proof. His valuables were kept in his bedroom.