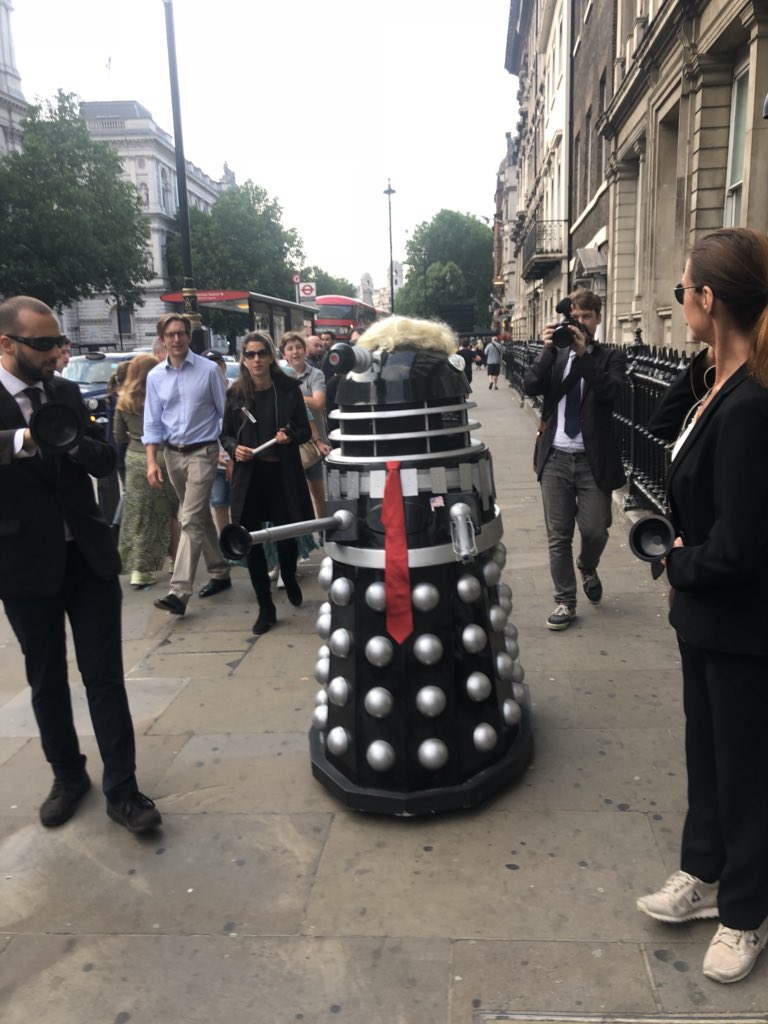 Big balloons get lots of coverage. This is my new favorite from the London anti-fake president demonstrations.

❝ Protestors have been given permission to fly a giant balloon portraying Donald Trump as an angry, orange baby over the U.K. parliament during the president’s first official visit to Britain.

❝ Named “Trump Baby,” the 20-foot-tall blimp will be airborne when Trump is in London next week.

Nice to know that longtime PINK FLOYD fans are alive and well in London.

❝ An 820 foot long fatberg has been found blocking a sewer in East London, and it is taking a lot of man power to get it out of the way.

The fatberg, a solid mass of congealed fat, wet wipes, diapers, oil, and condoms was found in a Victorian-era tunnel in Whitechapel. The Thames Water company said it was the largest they had ever seen and estimated the removal time at three weeks.

❝ The fatberg weighs about 143 tons and is 820 feet long. For reference, that’s 20 feet longer than London’s Tower Bridge. It’s also about the same weight as a blue whale, earth’s largest animal.

❝ Matt Rimmel, the head of the Thames Water’s waste network, expressed his shock at the fatberg and reminded everyone of how easily-avoided they are. Most fatbergs are caused by people putting things down their sinks and toilets that should be thrown in the garbage.

“It’s frustrating, as these situations are totally avoidable and caused by fat, oil, and grease being washed down sinks and wipes flushed down the loo,” he said.

This is not how you keep Britain tidy!

Daisy the science dog leads a detachment in the London March for Science.

The first freight train from China to London set off on Sunday on a journey that will cover a staggering 7,456 miles.

It departed from Yiwu West railway station in Zhejiang Province, China, and will arrive in Barking, London, having been trundling along for 18 days.

The service is being run by the China Railway Corporation. Britain is the eighth country to be added to its list of destinations, with London its 15th city.

The new route is set to boost trade ties between the UK and China with goods such as clothing and bags delivered along the re-established Silk Road, connecting Europe and Asia, according to The Indian Express, which cited a report from Xinhua news agency.

The focus on strengthening trade by expanding China’s railway infrastructure and network is part of Chinese president Xi Jinping’s ‘One Belt, One Road’ strategy, announced in late 2013.

I don’t think anyone asked Donald Trump for planning permission. Or ever will.

Being a retired old geek it took me a long time to get round to owning a smartphone. I finally got an iPhone SE — went from a flip-phone and a pocket camera to one device.

There’s long been a stylish sect of American snobbery that believes we’re above racism [uh-huh], at least as cosmopolitan as Parisians and confident our modern style of managing 2-party politics just can’t be beat.

With a nod to the memory of Frank Zappa.

The letter, society photographer Cecil Beaton took many photographs of bombed-out London, concentrating on the strange juxtapositions the debris provided, 1940. © cecil beaton, from london. portrait of a city.

❝ Labour’s Sadiq Khan has been elected mayor of London, becoming the first Muslim mayor of a major European capital city following a campaign that was dominated by his opponent’s negative tactics.

Khan beat his Conservative rival Zac Goldsmith by an astonishing 65% to 35% in an election marked by an unexpectedly high turnout. The final confirmed result was delayed until the early hours of Saturday morning because of discrepancies with a small number of votes…

❝ Khan used his victory speech to call for greater unity in London following a divisive campaign: “Fear does not make us safer, it only makes us weaker and the politics of fear is simply not welcome in our city.”

The result means Khan, who repeatedly emphasised his background as the son of an immigrant bus driver, ends eight years of Tory control of the UK’s capital city…Khan, the MP for Tooting, will now resign his parliamentary seat and take over City Hall from Boris Johnson, who has already returned to Westminster. In the process he will become the most powerful Labour politician currently holding elected office in the UK, although he faces a challenge to secure extra money for the capital from the Conservative-controlled government…

❝ Despite the importance of the office, the campaign will mainly be remembered for Goldsmith’s tactics…by the end he became synonymous with attacks on Khan’s alleged connections with Islamist extremists, his decision to target different ethnic groups with warnings about what Labour would do to their finances, and dog whistle campaigning.

❝ Although the candidate appeared at times uncomfortable with the decision to focus so much on personal attacks on Khan, prompting suggestions he was simply receiving bad advice, other London Conservatives queued up to personally blame Goldsmith for the result before it had even been announced…Even Goldsmith’s own sister criticised the campaign in tweets on Friday night.