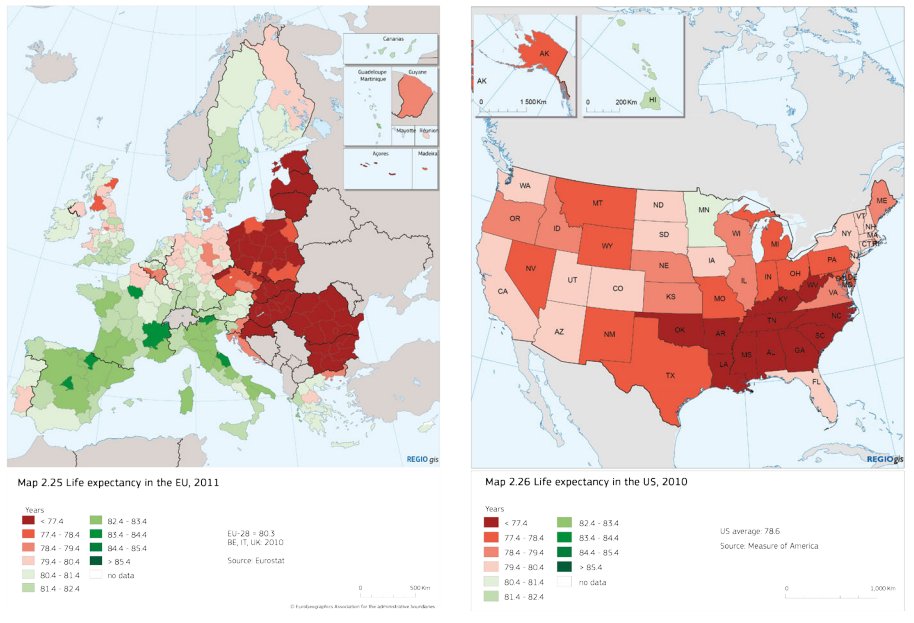 Life expectancy in the US and in Europe on the subnational level.
(Same legend in both maps) 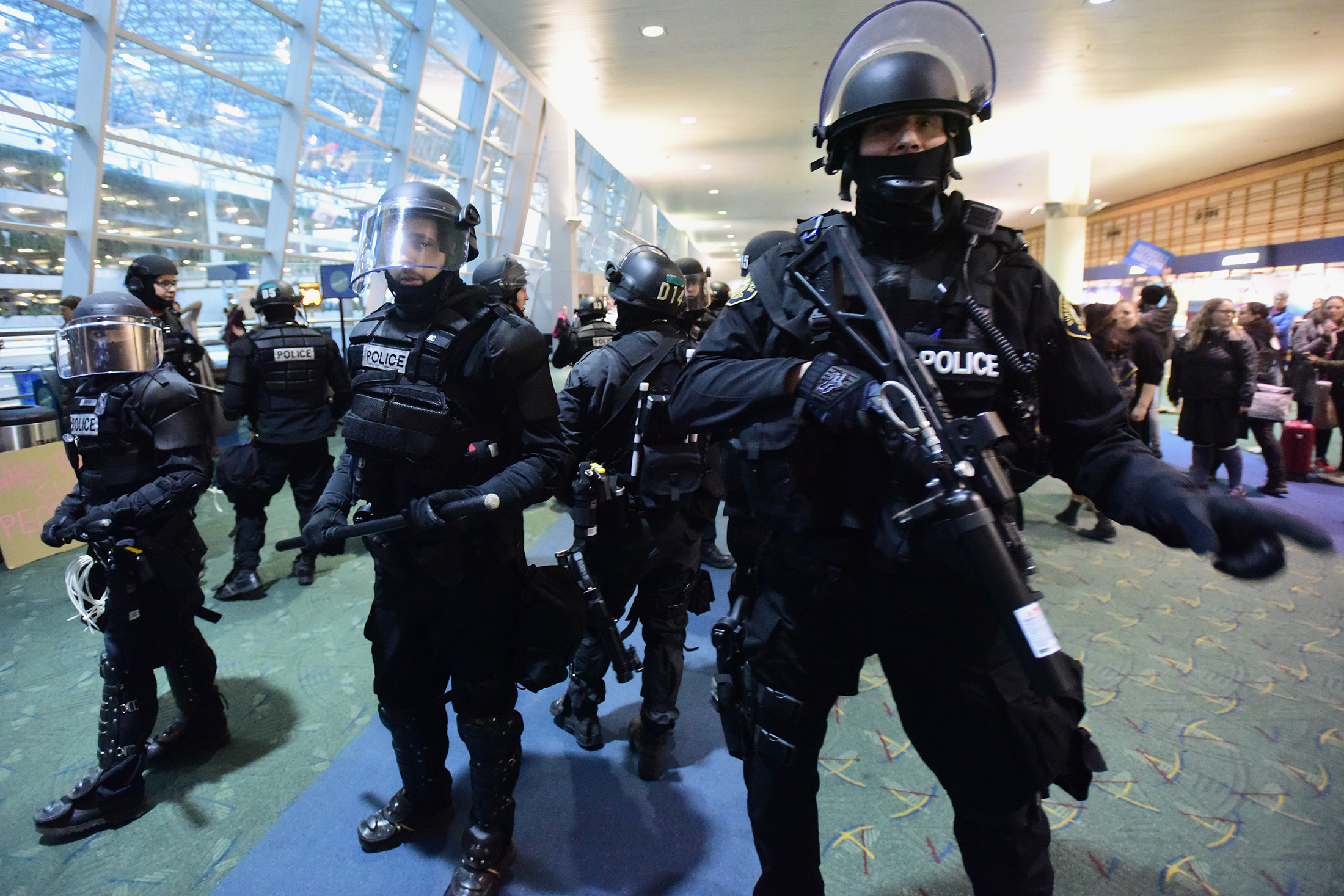 ❝ Like many Washington lobby groups, the U.S. Travel Association was quick to congratulate the new president on his victory last November…

❝ Initial contacts between Trump and leaders of Australia, Germany, Mexico, and China didn’t go well, resulting in negative publicity in countries that send lots of travelers to America. Then came the majority Muslim nation travel bans, with protests and news coverage that made for a global public relations disaster…

Meanwhile, the White House has instituted an airline cabin restriction on electronic devices for people flying from airports in eight nations. And last week, a U.S. State Department policy was revealed that mandates extra vetting of visa applicants in nations where U.S.-bound travelers must apply for one. This includes inspection of social media accounts for some and is likely to make it more difficult for millions of people to travel to America…

❝ So for the USTA’s chief executive officer, Roger Dow, and the industry he represents, what looked like the beginning of a beautiful friendship became in just two months something bordering on adversarial. Even America’s closest ally and next-door neighbor is wavering on sending its kids across the border for a field trip…

The new visa rules may have been the last straw for the USTA. Last week, Dow’s group issued an almost plaintive statement: “Mr. President, please tell the world that while we’re closed to terror, we’re open for business. Imbalanced communication is especially susceptible to being ‘lost in translation’ — so let’s work together to inform our friends and neighbors, who could benefit from reassurance, not just who is no longer welcome here, but who remains invited.”

RTFA for a deeper understanding of the mediocrity and ignorance delivered upon businesses other than real estate developers by our new so-called president. 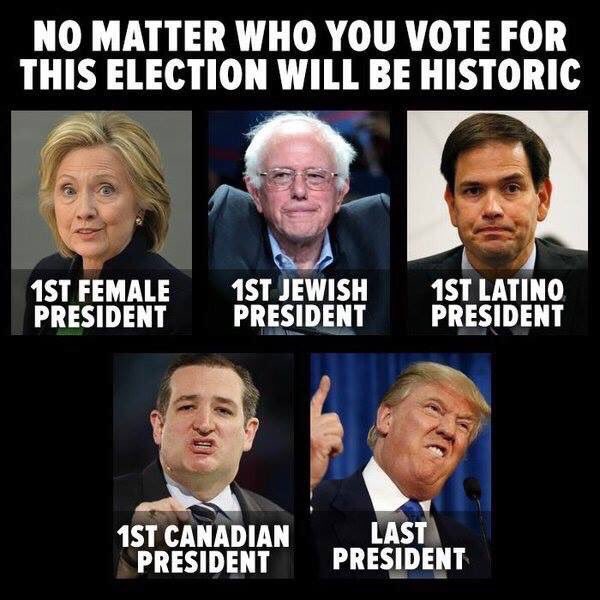 Remember when CNN was one of the best news sources in the world?

Walton also said he would hire a managing editor to “help leverage our newsgathering resources across multiple platforms.”

Most recently, Jautz has presided over the revamp and rebranding of the HLN channel, introducing [crap] signature programs such as Nancy Grace, Joy Behar, ShowBiz Tonight, Issues with Jane Velez Mitchell and Morning Express with Robin Meade…

Safon takes over HLN after heading CNN’s marketing for the last eight years, winning wide industry accolades for his marketing campaign for CNN and CNN=Politics. Before joining CNN, Safon oversaw marketing for one of CNN’s sister channels, TNT…

We continue to witness the devolution of a seminal news organization into the sort of grubby, entertainment-centered crap machine that doesn’t grow past mediocrity at that role.

The only person associated with CNN who deserves concern is Ted Turner – who admits that selling his networks to Time-Warner was the dumbest thing he ever did.

It occurred to Anne Mitchell as she was writing the letter that she might lose her job, which is why she chose not to sign it. But it was beyond her conception that she would be indicted and threatened with 10 years in prison for doing what she knew a nurse must: inform state regulators that a doctor at her rural hospital was practicing bad medicine…

But in what may be an unprecedented prosecution, Mitchell is scheduled to stand trial in state court Monday for “misuse of official information,” a third-degree felony in Texas.

Sounds about right for Texas.

The prosecutor, Scott M. Tidwell, said he would show that Mitchell had a history of making “inflammatory” statements about Dr. Rolando G. Arafiles Jr. and intended to damage his reputation when she reported him last April to the Texas Medical Board, which licenses and disciplines doctors.

Mitchell counters that as an administrative nurse, she had a professional obligation to protect patients from what she saw as a pattern of improper prescribing and surgical procedures – including a failed skin graft that Arafiles performed in the emergency room, without surgical privileges. He also sutured a rubber tip to a patient’s crushed finger for protection, an unconventional remedy that was later flagged as inappropriate by the Texas Department of State Health Services…

END_OF_DOCUMENT_TOKEN_TO_BE_REPLACED

For patients with prostate cancer, it is a common surgical procedure: a doctor implants dozens of radioactive seeds to attack the disease. But when Dr. Gary D. Kao treated one patient at the veterans’ hospital in Philadelphia, his aim was more than a little off.

Most of the seeds, 40 in all, landed in the patient’s healthy bladder, not the prostate. It was a serious mistake, and under federal rules, regulators investigated.

But Dr. Kao, with their consent, made his mistake all but disappear. He simply rewrote his surgical plan to match the number of seeds in the prostate, investigators said.

The revision may have made Dr. Kao look better, but it did nothing for the patient, who had to undergo a second implant. It failed, too, resulting in an unintended dose to the rectum. Regulators knew nothing of this second mistake because no one reported it.

Two years later, in 2005, Dr. Kao rewrote another surgical plan after putting half the seeds in the wrong organ. Once again, regulators did not object.

Had the government responded more aggressively, it might have uncovered a rogue cancer unit at the hospital, one that operated with virtually no outside scrutiny and botched 92 of 116 cancer treatments over a span of more than six years — and then kept quiet about it, according to interviews with investigators, government officials and public records.

The team continued implants for a year even though the equipment that measured whether patients received the proper radiation dose was broken. The radiation safety committee at the Veterans Affairs hospital knew of this problem but took no action, records show.

There was a time when VA hospitals were among the best in the nation. I had friends and family who only survived their wartime injuries because of the dedicated care and concern of VA hospitals and staff.

We had one physician in the family who left private practice to spend most of his career in VA hospitals – to give back to the service that paid for his training and education. And I’ve participated in clinical trials for medication that proved to be a boon for the elderly – trials centered at our local VA hospital even though most of those in the trials were civilians.

Crap treatment for our vets – regardless of history’s judgement of the politics of American wars in the last half-century – is unforgivable. Please, someone nudge the chickenhawks in Congress into getting off their rusty dusties and doing something about preventing this meanness.