❝ For two years, we’ve been studying the life histories of mass shooters in the United States for a project funded by the National Institute of Justice, the research arm of the U.S. Department of Justice. We’ve built a database dating back to 1966 of every mass shooter who shot and killed four or more people in a public place, and every shooting incident at schools, workplaces, and places of worship since 1999. We’ve interviewed incarcerated perpetrators and their families, shooting survivors and first responders. We’ve read media and social media, manifestos, suicide notes, trial transcripts and medical records.

❝ Our goal has been to find new, data-driven pathways for preventing such shootings. Although we haven’t found that mass shooters are all alike, our data do reveal four commonalities among the perpetrators of nearly all the mass shootings we studied…

❝ So what do these commonalities tell us about how to prevent future shootings?

One step needs to be depriving potential shooters of the means to carry out their plans. Potential shooting sites can be made less accessible with visible security measures such as metal detectors and police officers. And weapons need to be better controlled, through age restrictions, permit-to-purchase licensing, universal background checks, safe storage campaigns and red-flag laws — measures that help control firearm access for vulnerable individuals or people in crisis.

I come from a hunting and gun-owning family. The immediate generations before me – in my father’s family alone there were at least 7 who worked for firearms manufacturers. No big deal in industrial Southern New England.

My life and lifestyle wasn’t altered in the least by those regulations. Personally, I support a return to those strictures. Personally, I think those who use fear of regulation as an excuse for lousy politics are intellectually dishonest, deceiving no one other than themselves and their sympathizers.

New England’s shrinking Republican delegation in Congress is moving toward the brink of political extinction in November with Donald Trump at the top of the party’s ticket…Only four Republicans remain in New England’s 33-member congressional delegation, and three are in competitive races this fall. The other, four-term Senator Susan Collins of Maine, doesn’t face re-election this year.

Republican moderates who once represented the region became a dying breed in the past few decades as the party moved to the right. Trump, with his controversies and bombastic demeanor, has complicated what was already a difficult task of getting re-elected for the region’s party members.

Democrats, even before Trump was nominated, were banking on Clinton’s coattails to help them win the Senate and make gains in House seats. Trump’s antics and cratering poll numbers have some Republicans increasingly worried about a rout in November.

Princeton’s Julian Zelizer said there’s a “cushion” of Republican congressional seats in the South to guarantee continued strong presence, even with a loss of some members. But there’s no such cushion in New England for Republican lawmakers.

The cradle of the American Revolution was also an important center for every generation’s fight against bigotry, for civil rights. Whether you were an Abolitionist, fighting for Women’s Suffrage, involved with the LGBT struggle for equal opportunity, New England could be counted on for national support.

As one of the centers for education in the nation, contempt for populism and Trump makes rote Republican politics a liability.

A pregnant woman who was pulled over for talking on her cellphone — and then hurled to the ground and hogtied by CHP officers on the shoulder of the busy Harbor Freeway — has been paid $250,000 in damages.

The 30-year-old woman was charged with resisting arrest and driving with a suspended license, but the charges were dropped after a judge was shown a video of the incident, captured on a camera mounted on the dashboard of a California Highway Patrol cruiser.

In their report, the officers said the incident had escalated because the woman had ignored their orders and appeared to raise her arms in an aggressive manner after hopping out of the van.

Based on the report, Gaglione was charged by the Los Angeles city attorney with misdemeanor evading and resisting arrest and driving on a suspended license.

After the charges were dismissed, Tamara Gaglione pleaded no contest to a simple infraction of using her cellphone while driving.

CHP officials declined to discuss the incident, saying only that both sides concluded that settling the lawsuit for $250,000 was in the best interest of everyone.

Gaglione said she discovered the existence of the dashboard video when the officers later drove her to the hospital, discussing it in play-by-play fashion.

Her attorney, Howard Price, said Hernandez failed to mark a box on the arrest report noting the existence of the dash cam video and a prosecutor initially told him none existed. But Price said his client persisted.

Initially, he said, Price got a video from a backup patrol car and was told the dash cam video could not be copied. He said he went to the CHP and videotaped the original recording himself.

For Gaglione, now the mother of a 9-month old son, the incident on the freeway changed her life, she said. She left Los Angeles, where she worked as nanny and ran a pet care business.

“I will always be scared of police officers because of these knuckleheads,” she said.

Dishonest cops. Dishonest prosecutor. Complicit in covering each other’s buns. One of the most typical examples of the kind of corruption that happens on a day-to-day basis in American society.

I holler a lot about the big guys who commit historic crimes – from Bush’s Wars to Rand Paul’s lies about healthcare, economics and civil rights – but, their corruption is established as acceptable by the least of bureaucrats and civil servants who lie and cheat on the job, every day.

And as usual, it’s the knuckleheads who make life difficult for the good guys and the good cops. 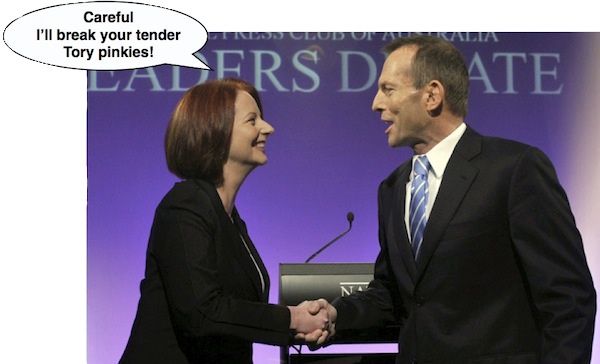 Julia Gillard, Australia’s prime minister, has verbally attacked the country’s opposition leader, labelling him as a hypocrite and a misogynist during a tirade in parliament that has garnered international media attention.

During a heated day in parliament on Tuesday, Gillard unleashed on Tony Abbott’s character after he called for the dismissal of Peter Slipper, the speaker of parliament, for lurid text messages he sent to a former member of staff…

In a fiery response, Gillard accused Abbott of possessing double standards when it came to sexism.

“I will not be lectured about sexism and misogyny by this man. I will not,” she said.

“And the government will not be lectured on sexism and misogyny by this man. Not now, not ever.

“If he wants to know what misogyny looks like in modern Australia he doesn’t need a motion in the House of Representatives, he needs a mirror, that’s what he needs.”

She then recounted previous…quotes by Abbott, which she said had repeatedly offended her personally.

I wish Democrats understood they might actually increase the tiny edge of respect they have over Republicans by calling them out for their bigotry and backwardness.

This post is a year old. Republicans haven’t gotten better. Their goals have retreated further into darkness and hatred.

Here is a list of misogynist bills introduced by Republicans in the past two weeks showing what they want for women.

1) Rape: Republicans are actually trying to redefine rape to exclude drugging a women and raping her, or getting her drunk and raping her. After a major backlash, they promised to stop. But they haven’t the language is still out there.

2) More Rape. A state legislator in Georgia wants to change the legal term for victims of rape, stalking, and domestic violence to “accuser.” But victims of other crimes, like robbery, would remain “victims.” Apparently in Georgia if a women is raped, she isn’t really – is just an annoying accuser. Which means the rapist is not really a criminal.

3) Murder. In South Dakota, Republicans proposed a bill that could make it legal to murder anyone who injures or threatens a fetus, including a doctor who provides abortion care and the mother. He denies it has anything to do with abortion so I guess it is aimed at makingit OK for a husband or boyfriend to kill his partner if he thinks she might injure the fetus- like in a car accident, or he just doesn’t like her anymore.

4) Starvation. Republicans want to cut nearly a billion dollars of food and other aid to low-income pregnant women, mothers, babies, and kids. But payments to corporations to not grow food to keep prices up is still in the budget.

5) Death. In Congress, Republicans have proposed a bill that would let hospitals allow a woman to die rather than perform an abortion necessary to save her life (so she and fetus die.)

END_OF_DOCUMENT_TOKEN_TO_BE_REPLACED

The University of Vermont’s Sigma Phi Epsilon fraternity is under investigation after a survey surfaced online asking fraternity brothers whom they would rape.

The national Sigma Phi Epsilon organization said in a statement that “the fraternity has instructed the chapter to cease all operations, pending further investigation.” It added that “any behavior that demeans women is not tolerated by the fraternity.”

Leadership from the fraternity’s national office was in Burlington on Wednesday, working with university administrators to look into the survey, which was discovered this week, CNN affiliate WCAX reported.

“We want to make sure that any individuals that were responsible for that document or any other faults are held accountable,” Tyler Boggess of Sigma Phi Epsilon told the affiliate.

“It is technically free speech, and yet it is deplorable and just absolutely inappropriate and offensive,” Annie Stevens, associate vice president for student and campus life, told the affiliate.

Dumb, thoughtless, misogynist, dumb, out of touch with the real world and – in case I forgot it – dumb!