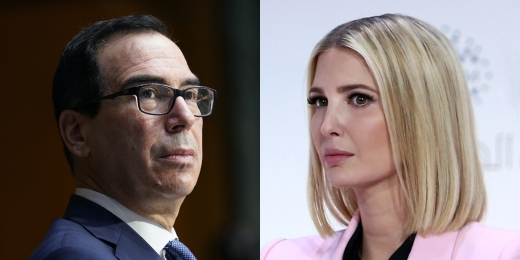 Jim Yong Kim threw the global financial development sector into a state of disarray: The former academic and health official announced he would be stepping down the following month from his role as president of the World Bank…creating worries that the America First champion would pick somebody ill suited for the global role…

As the White House moved to select its new leader, one name very dear to the Trump’s heart kept floating around: his daughter Ivanka Trump…two sources, not authorized to speak publicly, tell The Intercept the talk of Ivanka at the helm went far beyond the realm of Beltway chatter: Trump very much wanted Ivanka as World Bank president, and it was Mnuchin who actually blocked her ascent to the leadership role.

“It came incredibly close to happening,” said one well-placed source.

Representatives for Mnuchin and Ivanka Trump did not respond to requests for comment, nor did the World Bank or the Trump Organization.

Since Mnuchin, Ivanka and Meathead won’t comment (yet) don’t expect chapter and verse of how Mnuchin won out. Sooner or later, it will come out. The worst crap always does! 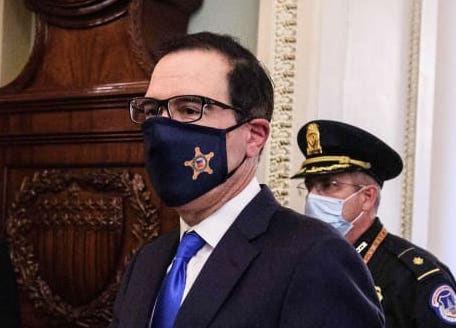 The Trump administration has secretly siphoned nearly $4 million away from a program that tracks and treats FDNY firefighters and medics suffering from 9/11 related illnesses, the Daily News has learned.

The payments were authorized and made by the National Institute for Occupational Safety and Health, which oversees the program. But instead of sending the funds to the city, the Treasury started keeping some of the money.

Now that the theft is public, the inevitable textbook of lies and excuses are starting to roll out. Some of them are truly fantastic fiction of the worst kind. None of them are believable. Even Trump’s persistent incompetence hardly begins to cover this.

Two-thirds of business economists in the U.S. expect a recession to begin by the end of 2020, while a plurality of respondents say trade policy is the greatest risk to the expansion, according to a new survey.

About 10 percent see the next contraction starting in 2019, 56 percent say 2020 and 33 percent said 2021 or later, according to the Aug. 28-Sept. 17 poll of 51 forecasters issued by the National Association for Business Economics…

Forty-one percent said the biggest downside risk was trade policy, followed by 18 percent of respondents citing higher interest rates and the same share saying it would be a substantial stock-market decline or volatility.

The reality of supply-side economics is failure. Trump’s added difference is in also increasing the national debt another trillion dollar$

❝ Earlier this week, the Trump administration revealed its long-awaited tax plan, the broad strokes of which are massive tax cuts for people like…Donald Trump and corporate America, at the expense of low-income families and the middle class…Of course, even Team Trump and the G.O.P. know they can’t win support for the plan by just coming out and saying, Rich people, this one’s for you; sorry, we’re not sorry, peasants!, which is why they’ve been claiming their framework is all about helping the average American…Lying.

❝ …Until recently, a 2012 paper by the Office of Tax Analysis that could be found on the Treasury Department’s Web site found that “workers pay 18% of the corporate tax while owners of capital pay 82%,” with the nonpartisan Joint Committee on Taxation estimating that “capital bears 75% of the long-run corporate-tax burden, with labor paying the rest.” In other words, Treasury Secretary Steve Mnuchin’s claim that slashing the corporate tax rate would disproportionately benefit workers is, to use economic jargon, total bullshit. It’s the rich guys who disproportionately stand to save the most — by a lot.

Mnuchin does what you expect him to do: ❝ The Treasury Department has taken down that 2012 economic analysis that contradicts Secretary Steven Mnuchin’s argument that workers would benefit the most from a corporate income tax cut.

Asked about the curious case of a paper at odds with the administration’s point of view, a Treasury spokeswoman told the Journal, “The paper was a dated staff analysis from the previous administration. It does not represent our current thinking and analysis.”

There’s a surprise, eh? BTW, most surveys never find fewer than 75% of economics professionals agreeing with that paper – and not agreeing with creeps like Trump and Mnuchin.