Damage is on the starboard

❝ BTW…I learned from one of the several articles about this that the US Navy calls crunchy fenders a “collision” only if both vessels are in motion. This is an “allision” because the Littoral Attack Ship thumped into another ship moored in place. 🙂

Thanks to SmartAlix for sharing George Takei’s photo

Transit officials in Montreal said they were looking into a $219 fine levied on a woman kicked off a bus along with her son for not having exact change.

Pauline Tantost, 24, filed a complaint with the STM last week over the incident, which she said began when she pulled out a $5 bill to pay for the $3 fare.

STM spokeswoman Amelie Regis said an internal inquiry was taking place and the driver and other agency employees would be asked for their version of events.

Tantost told The Montreal Gazette she was just trying to get home with her son, Xavier, after a lengthy visit to Montreal Children’s Hospital last Friday. She boarded the bus at 10 p.m. but didn’t have the required $3. She did have a $5 bill, but the driver refused to take it and warned her she could be ticketed by STM inspectors if she stayed aboard without a ticket.

Tantost refused to disembark and, sure enough, STM inspectors soon met the bus and asked to see her ticket. They then escorted mother and son to the sidewalk and left them there with a $219 citation.

“I left the bus on my own because I felt bad, I couldn’t stop crying, so I didn’t want everyone seeing me like that,” Tantost told the newspaper.

Although STM said it wasn’t the driver who called the inspectors, Wayne Larsen, another passenger who witnessed the scene, told The Gazette, “To me, it looked like it was an ambush because these guys got on and targeted her right away.”

When this guy isn’t driving the bus he must moonlight as Scrooge. 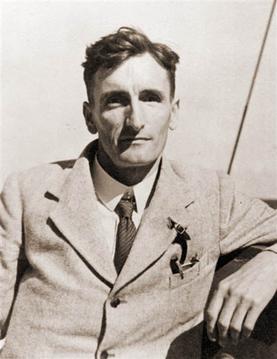 Seventy-five years ago an amateur scientist made a breakthrough discovery in the field of climate change. Guy Stewart Callendar linked global warming to CO2 emissions but his work went largely unnoticed at the time.

Now the anniversary of his discovery has been commemorated by two leading climate scientists.

Callendar, born in Montreal, Canada in 1898, made all his calculations by hand in his spare time, decades before the effects of global warming became widely debated.

The son of English physicist Hugh Longbourne Callendar, who studied thermodynamics, Callendar worked from his home in West Sussex.

A steam engineer by profession, his research first appeared in the quarterly journal of the Royal Meteorological Society in April 1938.

Prof Jones, of the UEA’s Climatic Research Unit, and Dr Hawkins, from Reading’s National Centre for Atmospheric Science, have had their commemorative research paper on Callendar published in the same journal this month.

“Callendar was the first to discover that the planet had warmed,” said Prof Jones. “He collected world temperature measurements and suggested that this warming was related to carbon dioxide emissions.”

This became known for a time as the “Callendar Effect“.

“He is still relatively unknown as a scientist but his contribution was fundamental to climate science today,” said Prof Jones.

He deserves credit for his groundbreaking work. The kind of research still unread by most of the no-nothing skeptics who remain unperturbed by essential peer-reviewed science. It is a delight to learn of seminal work being republished.

Montreal – Canada Border Services Agency officers found an impressive amount of cocaine in the two suitcases of a female traveller flying in from Jamaica on Feb. 27, almost 32 kilograms.

The suitcases were stuffed with 63 packets of powdered soy milk in plastic bags jumbled in with some clothing.

When tested, the soy powder, to which you add water to make a milk substitute, was anything but a healthy drink product.

The powder was cocaine.

The woman who had checked in the bags was arrested and the case has been turned over to the RCMP who will continue the investigation.

Try to convince Canadian coppers you thought you couldn’t get soy powder in Canada – so you brought your own? Cripes!

21 Balançoires takes over a newly open space in front of Université du Québec à Montréal’s Science Faculty. Together with Luc-Alain Giraldeau, an animal behaviour professor from the faculty, we explored the topic of cooperation which states that together we achieve better things than separately.

The result is a giant collective instrument made of 21 musical swings; each swing in motion triggers different notes, all the swings together compose a piece, but some sounds only emerge from cooperation. The project stimulates ownership of the new space, bringing together people of all ages and backgrounds, and creating a place for playing and hanging out in the middle of the city centre.

We owe the musical interpretation of this playful experiment to composer Radwan Ghazi-Moumneh.

Now, do you think the lawyers on retainer to whichever city you live in would allow this?

Authorities are searching for Luka Rocco Magnotta, 29, who they say is allegedly responsible for a human torso discovered in Montreal, thought to be linked to a human hand and foot that were separately mailed from Montreal to Ottawa…

The suspect has no criminal background, and his image and information related to him were later recovered from a “very graphic” website, Montreal police spokesman Ian Lafreniere said.

Police say they plan to charge him with murder once he’s apprehended.

Lafreniere said authorities have also found other body parts, potentially from the same attack, which is believed to have been committed in Montreal…

“It wasn’t a random attack,” Lafreniere noted. “They knew each other…”

The human foot was sent to the Conservative Party of Canada headquarters in Ottawa, prompting a hazardous materials team to investigate…

The hand was intercepted by workers at a Montreal postal terminal…

In Montreal, the human torso was found behind an apartment building, authorities said.

Any other interesting bits and pieces will be reported as they are discovered. Yes, the Great White North has their own share of nutball murderers.

Vaccinating children aged two to four years against seasonal influenza resulted in a 34% decline in flu-like illnesses, found a study in Canadian Medical Association Journal. Preschool-aged children have influenza infection rates of 25%-43%, higher than other age groups. Vaccinating healthy children can help prevent spread of infection in the home and the community.

In 2006 through 2007, the US Advisory Committee on Immunization Practices expanded its recommendations to give the seasonal flu vaccine to children beyond the current target group of 6 months to 23 months of age. However, Canada’s National Advisory Committee on Immunization did not, allowing a comparison of vaccination practices between the two countries.

“Following the policy change in the United States, we observed a decline in the rate of emergency department visits for influenza-like illness at Children’s Hospital Boston relative to the Montreal Children’s Hospital in the target age group, children two to four years old,” they state.

They also saw declines of 11%-18% in other nontarget age groups (ages 0-1 year, 2-4 years, 5-9 years and 10-18 years), which may be related to an overall reduction of influenza in transmission at home and in the community because of vaccination of two to four year olds…

“…Our findings provide evidence that, in our US study community (i.e., Boston), the recommendation of the Advisory Committee on Immunization Practices to routinely vaccinate preschool-aged children against seasonal influenza is improving pediatric influenza-related outcomes,” conclude the authors.

Not only seems reasonable; but, overdue. I have no idea why it’s taken either nation so long to get round to this level of vaccnation – but, I’m glad they finally did.

After all, half my North American kinfolk live in the GWN. 🙂

The Duke and Duchess of Cambridge faced the first organised protests against their visit to Canada within minutes of their arrival in Montreal on Saturday night.

Demonstrators held up placards denouncing the couple as “parasites” as they arrived at the world renowned Sainte-Justine university hospital. They were heavily outnumbered by others who had come out to cheer the royal couple, but one of the protest organisers, Guillaume Martin, told reporters: “We think the monarchy is something from the middle ages and we don’t want to pay for the trip.”

The Canadian government, which is meeting the bill, says that the extra cost, equivalent to £950,000, amounts to only a few cents a head for the country’s population…

Royal visitors have had an uncertain welcome in Quebec province – where more than 80% of the population speak French – in recent decades. The Queen has not returned to Quebec City since protesters turned their backs on her and booed in 1964, and two years ago Prince Charles and Camilla were held up by scuffles between demonstrators and police as they visited Montreal.

Radical young protesters from the Quebec Resistance Network have called for a demonstration outside the city hall, though they have promised it will be peaceful.

Patrick Bourgeois, leader of the network, said the separatists want to send a message “that the monarchy is not welcome in Quebec”…

The royal couple on Saturday went through the near-obligatory tree-planting ceremony at the governor-general’s residence – a Canadian hemlock. They later met military veterans and members of the war brides association at the Canadian war museum – nearly 45,000 young British and European women emigrated to the country after the second world war.

People forget their own history so easily. The Canadian half of my kinfolk arrived on board slave ships. Forced to emigrate by Lairds who decided sheep were more profitable than people — they didn’t feel required to transport Highland Scots at the “standards” required for slaves. Half died either on the voyage…or that first winter after they were dumped on the shore in Nova Scotia.

No – I wouldn’t be as polite as the Quebecois in my greeting to the royal sponges. They contribute as little to the life of all the other mortals on this planet as ever. Perhaps less.

Toronto police are appealing to the public to help them find $1.9 million in distinctive gold bars they say were “fraudulently obtained…”

A “fraudulently obtained” bank draft in the amount of $1,895,751 was used to purchase the bars, police said.

The purchase included 75 gold bars, weighing 10 ounces each, that were manufactured by the Perth Mint in Australia.

The bars bear the symbol of the Perth Mint on one side and kangaroos imprinted on the back, police said.

The Canadian Bankers Association is offering a $50,000 reward for anyone who can provide information that leads to the recovery of the bars, and the arrest and conviction of anyone involved.

That’s a serious screwup. So, uh, which bank in Montreal is the pushover, eh?