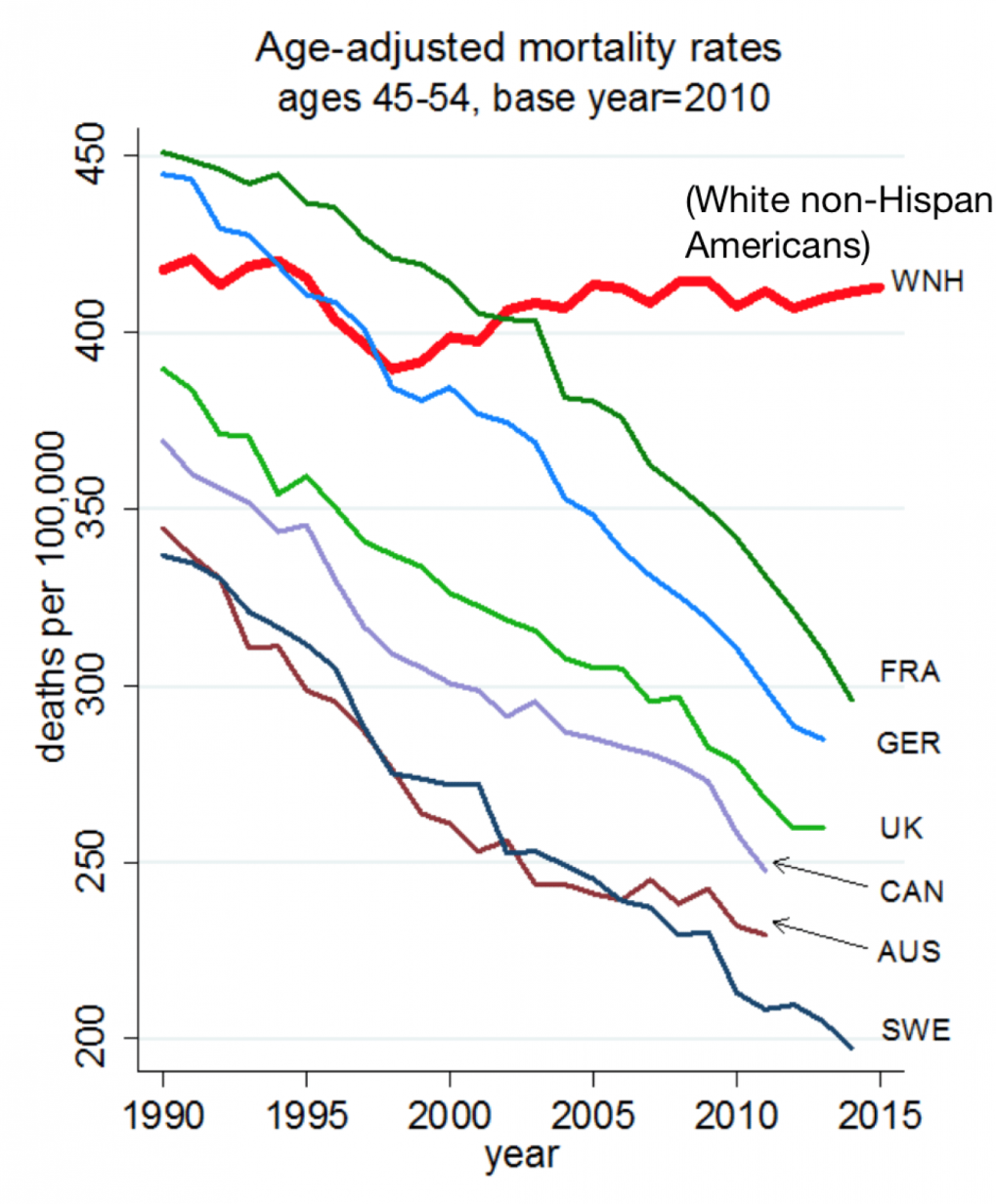 ❝ The U.S. white working class is in big trouble. The data is piling up. Economists Anne Case and Angus Deaton have a new paper out, exploring mortality trends in the U.S. The results confirm the finding of their famous 2015 study — white Americans without college degrees are dying in increasing numbers, even as other groups within and outside of the country live longer. And the negative trends continued over the past year.

The problem appears to be specific to white Americans…

❝ Why is this happening? Case and Deaton don’t really know. Obesity would seem like a possible culprit, but it’s also up among black Americans and British people, whose mortality rates from heart disease have fallen. Deaths from suicide, alcoholism and drug overdoses — what the authors collectively call “deaths of despair” — have been climbing rapidly. But they only account for a minority of the increase. And no one knows the definitive reason for white despair.

❝ Case and Deaton instead suggest economic causes — lack of opportunity, economic insecurity and inequality. But this is hard to square with falling mortality for black Americans, who also suffered mightily in the Great Recession and have been on the losing end of increasing inequality…

❝ …But whatever the cause, I know of one policy that would go a long way toward fighting the baleful trend — national health care.

A national health service — which also goes by the names of single-payer health care and socialized medicine — would drive down the price of basic health care. Because an NHS would be such a huge customer, it would be able to use its market power to get better deals from providers. This is probably why the same health-care treatments and services cost so much less in Europe than in the U.S. — those other countries have their governments do the bargaining. In fact, this already works in the U.S. — Medicare, the single-payer system that ensures the elderly, has seen much lower cost growth than private health insurance, even though Medicare isn’t yet allowed by law to negotiate for cheaper drugs…

Though the Pentagon is allowed to do for our military.

❝ Finally, an NHS could prevent overuse of opioids. Prescription of painkillers has been a major factor in the opiate epidemic, which has hit the white working class hard. Drug manufacturers, however, have lobbied to preserve widespread access to opioids. These companies have also given doctors incentives and perks — essentially, bribes — to keep prescribing these dangerous drugs. An NHS would be able to resist lobbying pressure and make sure doctors didn’t have an incentive to hand out too many opioid pills.

❝ A NHS wouldn’t require the creation of a new bureaucracy — it would just require expanding Medicare to cover the whole nation. There’s already a campaign to do this, led by none other than Senator Bernie Sanders. An NHS also wouldn’t prevent rich people from buying expensive or rapid treatment in private markets.

I agree with Noah. “If…Trump wanted to prevent the people who elected him from continuing to die in rising numbers, he would join Sanders in the campaign to extend Medicare to cover all Americans”…But, then, we already know Trump is a pathological liar. I wouldn’t trust him to carry through even on a promise to Bernie – much less the rest of us.

No, I like the idea of supporting the election of for-real independents regardless of whatever political label they want to slap on their foreheads. Fight for single-payer expansion of Medicare to all and I’m there, Bubba.

BTW, Noah Smith is one of the jillions of folks on Twitter actually worth following.