The massive Bootleg Fire in Oregon has scorched an area larger than Los Angeles, and it’s only 30% contained. The fire is so large and is burning so hot that it’s creating its own weather.

It’s just one of the many blazes raging in the West; the National Interagency Fire Center is watching 80 large fires across 13 states this week – a testament to just how destructive the US wildfire season has become…And the effects of the fires stretch all the way to the East Coast…

In some areas, the smoke has reached the ground level, where it can be a health concern. Air quality alerts have been issued hundreds of miles from the flames, as far east as Pennsylvania and New York.

Never seen it this bad in New Mexico in all the years I’ve lived here.

This fool thinks all counties are the same or similar in size.

As an election issue competing against the immediacy of a global pandemic, an economic crisis, and a renegade in the White House, the legalization of marijuana was always likely to be something of a slow burn.

Yet as it turned out, voters were more enthused about that than almost any other issue in states where drugs were on the ballot. They delivered a unanimous mandate for recreational marijuana use in Arizona, Montana, New Jersey and South Dakota, and approved its use for medicinal purposes in Mississippi and South Dakota.

With only 15 states still outlawing marijuana in any form, some experts believe the campaign to advance formal policy and promote acceptance…has reached a tipping point.

Not a bad sign when even Trump’s true believers are voting for legal weed. Even after years of crap lies about the “dangers” lurking.

The mask that Trump should be required to wear

A report released by the American Academy of Pediatrics and the Children’s Hospital Association shows 74,160 new cases of coronavirus among children from August 6 to August 20. According to the report, this is an increase of 21 percent in cases over the past two weeks…

In regard to hospitalizations, between 0.2 percent and 8.6 percent of children diagnosed with coronavirus were hospitalized. “At this time, it appears that severe illness due to COVID-19 is rare among children,” the report said.

They don’t get as sick as the people around them that they infect.

An entire fourth grade-class in Mississippi was forced to quarantine and move to online-only learning after multiple teachers tested positive for coronavirus. Adam Pugh, Superintendent of the Lafayette County told The Associated Press that 200 students were told to quarantine after a majority of students were exposed…

You’d think there might be rational limits to stupid. You’d be wrong. After more than 500 students, faculty and staff tested positive at the University of Alabama, Tuscaloosa Mayor Walt Maddox ordered all bars in the city to close down for two weeks.

I’m not certain how useful the reasoning was.

…There are a couple scenarios to consider, if and when COVID-19 vaccines become available. One scenario is that there is plenty of vaccine, and we have to figure out how to distribute 300 million doses efficiently. What questions or challenges does that raise?

I would love for that to be the case. If we have that much vaccine available simultaneously, then the challenge is to get administered to as many people as possible, as quickly as possible.

To make it geographically accessible, we would want to distribute broadly, including to rural locations and multiple points of distribution within urban areas. We also want to send it to places where people are likely to want vaccine. These places can include many types of healthcare providers, such as primary care physicians, specialty providers, Federally Qualified Healthcare Clinics, hospitals, and nursing homes. But you also want to think about other locations, like pharmacies, retail clinics, workplaces, prisons, military bases or schools, that can meet people where they are and at different times of the day. You also need to take into account that the vaccine needs to be affordable, and that’s for the total cost of the vaccine itself and the administration fee to obtain it. Throughout all of this, there will need to be an educational campaign that informs people on why to get a vaccine and how they can do so.

As long as the meathead in the White House and his lackeys are in charge, the fight to get this done safely and timely, is even more critical. They’re barely capable of taking care of their own selves…much less a working nation. 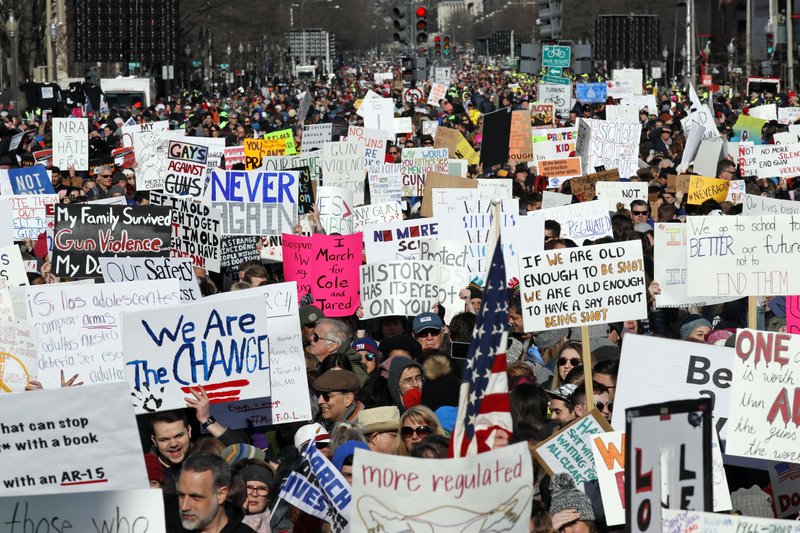 ❝ In a historic groundswell of youth activism, hundreds of thousands of teenagers and their supporters rallied across the U.S. against gun violence Saturday, vowing to transform fear and grief into a “vote-them-out” movement and tougher laws against weapons and ammo.

They took to the streets of the nation’s capital and such cities as Boston, New York, Chicago, Houston, Minneapolis, Phoenix, Los Angeles and Oakland, California – and Santa Fe, New Mexico – in the kind of numbers seen during the Vietnam era, sweeping up activists long frustrated by stalemate in the gun debate and bringing in lots of new, young voices.

They were called to action by a brand-new corps of leaders: student survivors of the school shooting in Parkland, Florida, that left 17 people dead Feb. 14…

❝ “We will continue to fight for our dead friends,” Delaney Tarr, a Parkland survivor, declared from the stage. The crowd roared with approval as she laid down the students’ central demand: a ban on “weapons of war” for all but warriors.

Student protesters called for a ban on high-capacity magazines and assault-type weapons like the one used by the killer in Parkland, comprehensive background checks, and a higher minimum age to buy guns.

Overdue. As in the VietNam War era, this might be the time when a single issue serves as dividing line between courage and progress on the Left – and predictable do-nothing policies from centrist Democrats, Republicans committed to 18th Century bigotry, ignoranus social policies.

❝ Hispanic voters were largely credited with President Obama’s victory in 2012, but they weren’t as crucial as many believed. Mr. Obama didn’t even need to win the Hispanic vote to put him over the top, thanks to high black turnout and support among white voters in the North. The turnout among Hispanic voters didn’t surge, even though exit polls implied that it had.

It’s too soon to say whether it will be decisive for her. The geographic distribution of Hispanic voters means that many of her gains will help her in noncompetitive states like Texas and California, not Michigan and Pennsylvania.

But the surge is real, and it’s big. It could be enough to overcome Mr. Trump’s strength among white-working class voters in the swing states of Florida and Nevada. If it does, it will almost certainly win her the election…

Lots of details for electoral politics wonks. When you live in a state where Hispanic ethnicity wavers forth-and-back over the 50% boundary you accept that issue-specific voting takes place. That’s fine. Here in northern New Mexico at least the memory of days when Democrats had the backbone for class warfare still counts at election time.

So does voter turnout. Not so unusual to see 50% turnout in primaries. At least Democrat primaries, here. Presidential elections often turn out 60-70% of registered voters. Better than average US numbers.

Tens of thousands of protesters have rallied outside Japan’s parliament to oppose legislation that could see troops in the officially pacifist nation engage in combat for the first time since World War II.

In one of the summer’s biggest protests ahead of the new laws anticipated passage next month, protesters on Sunday chanted “No to war legislation!” ”Scrap the bills now!” and “Abe, quit!”

Organisers said about 120,000 people took part in the rally in the government district of Tokyo, filling the street outside the front gate of the parliament, or Diet. Similar demonstrations were held across the nation.

In July, the more powerful lower house passed the bills that allow the army, or Self Defence Force, to engage in combat when allies come under attack even when Japan itself is not.

The upper house is currently debating the bills and is expected to pass them by late September, making it law.

Prime Minister Shinzo Abe and his supporters say the bills are necessary for Japan to deal with the changed security environment in the world.

Public polls showing the majority of people oppose the bills and support for Abe’s government is declining.

Decades behind the US, Japan has learned the lessons of sophistry well. I recall the smattering of debate after WW2 when the pointy-heads in Washington decided to change the name of the War Department to the Department of Defense. As we changed to a time when the rest of the world needed to defend itself against Imperial America instead of Imperial England and Imperial Europe.

Not so incidentally, it may not take the anti-war movement in Japan to bring down Abe. Abenomics may do it for him. Pledging – as conservatives always do – to bring jobs growth and better economic times to the working people of Japan, the prime minister has only aided his Zaibatsu buddies. The rest of the nation suffers through a renewal of stagnation and ennui.

In states with the most oil and gas drilling, including Texas, Oklahoma and North Dakota, the U.S. Department of Labor has won back pay for over 4,000 energy industry workers in just the past year.

It totaled $6.7 million dollars, accounting for a third of all such settlements by all types of industries nationwide…

A Houston company that builds drilling rigs that paid back $687,000 in back wages to 133 roughnecks and crane operators

A Louisiana company that provides labor services to the industry and paid nearly $2 million in back wages to 2,267 workers

A New Mexico company that agreed to pay nearly $600,000 to 121 to drilling rig “mud logging technicians”

Galvin Kennedy, a lawyer in Houston who sues energy companies on behalf of workers, said his cases most often involved “mid-tier oil and gas companies” that got “sloppy or greedy” and misclassified their employees as independent contractors and avoided paying overtime and other benefits…

The oil and gas industry is run by exactly the kind of greedy bastards you think they are. They whine that the paperwork is too complex and that’s why there is a problem. Hogwash!

It’s been decades since I worked in the industry and the problem ain’t news. Manipulation of work hours and on/off contract work has been going on ever since the first lawyer clambered up out of a petrochemical sewer and showed folks in the front office how to steal a little more back from workers.

Not any different from the thievery that force states like New Mexico to sue one or another fossil fuel outfit for years of hidden back taxes every decade. Part of doing business with these creeps. 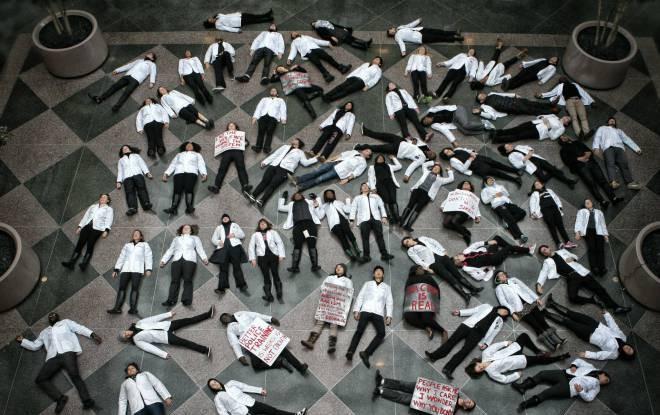