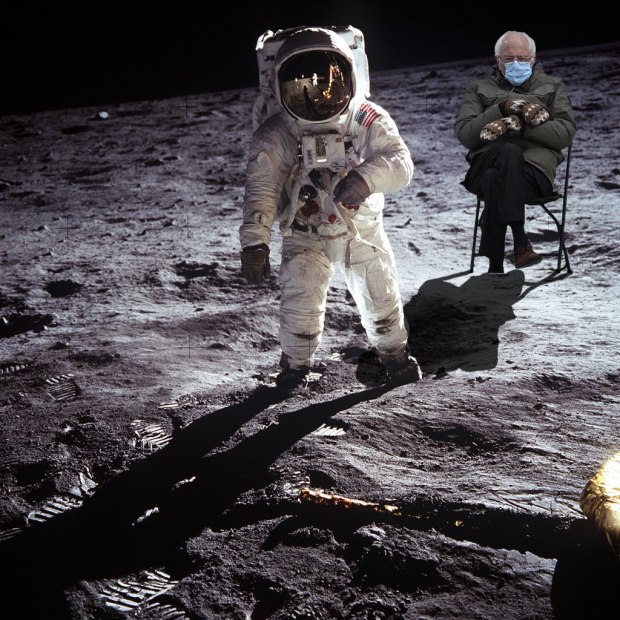 From a new group of three posted at Motley News.

…for posting being a bit sparse starting up the week. Tidying up about Lot 4 for autumn and winter. Plus preparing for the grand arrival of a new television set. Nothing outrageous in technical advancement except its arrival prompts moving our existing set to another household in the family – followed by that other existing set to be prepared for a move a few states over to another state courtesy of kinfolk coming to Santa Fe for Thanksgiving.

A day dealing with unpacking after the TV critter arrives, resetting my Harmony remote [if it’s still usable], starting off with the accepted mods and nudges from RTINGS and AVSFORUM of the new TV. All tomorrow. And all should then return to what passes for normal around here.

Ole Miss’ new mascot, Tony the Landshark, makes his debut at the “Meet the Rebels” fan day at the Manning Center in Oxford, MS. Check out the article.

❝ Something interesting has emerged in voting patterns on both sides of the Atlantic: Young people are voting in ways that are markedly different from their elders. A great divide appears to have opened up, based not so much on income, education, or gender as on the voters’ generation.

There are good reasons for this divide. The lives of both old and young, as they are now lived, are different. Their pasts are different, and so are their prospects.

❝ The Cold War, for example, was over even before some were born and while others were still children. Words like socialism do not convey the meaning they once did. If socialism means creating a society where shared concerns are not given short shrift – where people care about other people and the environment in which they live – so be it…

Older upper-middle-class Americans and Europeans have had a good life. When they entered the labor force, well-compensated jobs were waiting for them. The question they asked was what they wanted to do, not how long they would have to live with their parents before they got a job that enabled them to move out…

❝ Today, the expectations of young people, wherever they are in the income distribution, are the opposite. They face job insecurity throughout their lives. On average, many college graduates will search for months before they find a job – often only after having taken one or two unpaid internships. And they count themselves lucky, because they know that their poorer counterparts, some of whom did better in school, cannot afford to spend a year or two without income, and do not have the connections to get an internship in the first place.

Today’s young university graduates are burdened with debt – the poorer they are, the more they owe. So they do not ask what job they would like; they simply ask what job will enable them to pay their college loans, which often will burden them for 20 years or more. Likewise, buying a home is a distant dream…

❝ In short, today’s young people view the world through the lens of intergenerational fairness. The children of the upper middle class may do well in the end, because they will inherit wealth from their parents. While they may not like this kind of dependence, they dislike even more the alternative: a “fresh start” in which the cards are stacked against their attainment of anything approaching what was once viewed as a basic middle-class lifestyle.

RTFA to see where Joe Stiglitz goes with his analysis, what and who he thinks may offer some solutions to the questions asked by today’s new generation. Whether those answers are complete or not? Whether solutions forthcoming from political formations any of us accept anymore – is a question you’ll have to answer for yourself.

They appeared in the nation’s capital as part of Inside Cornell, a series of public policy roundtables. The pair spoke before an audience consisting largely of journalists who closely follow these issues. National Public Radio correspondent Allison Aubrey moderated the panel.

Tom Brenna said the most fundamental change proposed for the new dietary guidelines, which are updated every five years, “is a focus on overall healthy eating patterns, rather than individual foods…”

Brenna also lauded what he called an emerging emphasis on “nutrition above the neck,” a reference to the role diet plays in neurocognitive health. His Cornell lab, for example, conducts extensive research on nutrients including omega-3 fatty acids, which are proving to be effective in treating depression.

David Just focuses on how consumers make their decisions about what foods to purchase and eat.

He said the government’s new nutritional guidance “will probably generate no response at all at the consumer level, at least initially. The primary effect will come from the millions of meals directly influenced by the government, including public school lunches, hospital food and military meals.”

Over time, however, as the new advice takes hold, it will start to be felt as “consumers make their shopping lists or decide which groceries to display prominently in their kitchens, as opposed to buried in cabinets.”

Just also stressed the positive role the food industry can play by adjusting how it markets and advertises its products. Touting the good taste and benefits of healthier foods on packaging, he noted, is far more effective than any government warning about the risks of a poor diet.

They also discussed the never-publicized lobbying over dietary guideline recommendations. The meat industry – of course – wants to water down recommendations that Americans eat less red meat, less processed meat. The last thing they want is linking an animal-based diet to environmental problems like greenhouse gas emissions and water pollution.

Once Congress gets quickly past the parts about science, no doubt they will return to rules and regulations directly proportional to the influence of lobbyist/industry dollar$.

BTW, that 2nd link up top is a fine article on the details of new recommendations.

That will also take you to the ultraviolet site to use their Facebook, Twitter and Email links.

Now, you understand why the Republican war on Women is so loathsome. These benefits are a significant portion of what they’ve been trying to stop.

An army of 1,001 Chinese volunteers has set a new Guinness world record for “mattress dominoes”…The volunteers, most of whom were domino lovers, first carefully arranged and leaned against 1,001 mattresses in an empty section of a shopping mall in Shanghai.

They were careful not to fall back and ruin the attempt before it even started.

The team leader, who was gripping his mattress with both hands…fell backwards, knocking into the second person in the chain and starting the domino effect.

It was 10 minutes before the last one came down to finish the rally.

Not too bad for news coverage on a Sunday.

With the cost of fuel hitting family budgets harder and harder, Ford of Europe has commenced production of its most fuel efficient (and lowest CO2 emissions) passenger car ever. The company’s new Fiesta ECOnetic Technology is powered by a 1.6-liter Duratorq TDCi diesel engine providing 205 Nm of torque that offers fuel economy figures of 71 mpg US…with CO2 emissions of 87 g/km.

In addition to the diesel engine that features bespoke calibration and optimized gear ratios, the car’s fuel-sipping specs come courtesy of a variety of ECOnetic technologies. These include Auto-Start-Stop, which shuts down the engine when the vehicle is at idle, Smart Regenerative Charging, which feeds back energy captured when braking to the vehicle’s battery, Eco mode, which provides the driver with feedback about their driving style, and a gear shift indicator in the instrument cluster that signals the optimum time to change gear…The company says half of all Ford cars sold in Europe will be ECOnetic Technology models by the end of the year, increasing to two-thirds in 2013.

North American motorists hoping ECOnetic Technology models will be showing up in showrooms across the pond seem to be out of luck with a 2009 article in Business Week saying Ford wouldn’t be able to sell enough of the vehicles at a cheap enough price, due to exchange rates. Additionally, upgrading its Mexico plant to produce diesel engines would cost more than US$350 million. The company doesn’t believe there is a sufficient market for diesel cars in North and South America to justify such an outlay.

Which is baloney – if they looked at what the Germans are doing. You can buy cars sized from the VW Golf to the Audi A8 and Mercedes E-class. Plus the Ultimo crowd at BMW. They all have waiting lists for diesel-power. That includes cars starting at under $23K with diesel engines.

These ain’t your father’s oil-burner Oldsmobile – and neither is the ECOnetic Ford Fiesta. Mullaley needs to get on board.