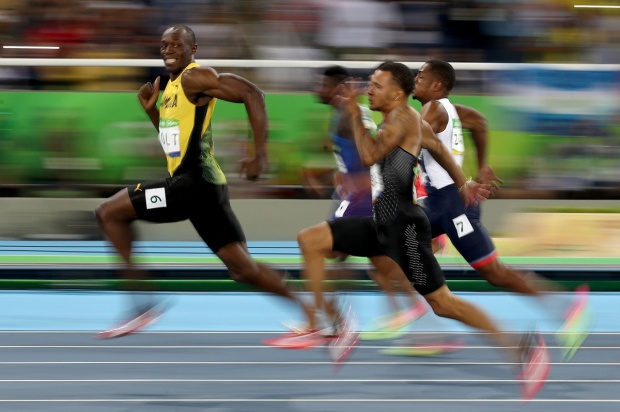 Usain Bolt does it with a smile

Great visual and music effects with dancers performing to Swan Lake – with glass-fibre cloaks – in the opening ceremony from the Sochi Olympics. I haven’t found a decent video available, yet, that loads into WordPress. It really requires HD.

The overwhelming majority of critics and viewers loved it. Which means there still are a number of Fox News-level reviewers in the US who didn’t get it. Some folks have never seen a waterbird like a swan rise in slow motion from a lake, I guess.

The annual contest is one of many offbeat events such as wife-carrying that are held in the summer when normally reserved Finns like to celebrate the warmer weather with silliness and outdoor sport.

Ere Karjalainen, who beat around 50 contestants, including some who had travelled from England and India, said he had practiced only once and prepared mainly “by drinking”.

Not that the skills are totally comparable, but he bettered the gold medal javelin throw at the London Olympics by nearly 17 meters.

Eventually they got him a rope and pulled him the rest of the way. 🙂

I know a few endurance riders in my neck of the prairie. I’m more of an endurance reader. 🙂


The street dance troupe Boadicea will be performing at the Olympic Opening Ceremonies in London later this month. Here they are cows, dancing for Ben & Jerry’s Ice Cream, in support of the Supporting Better Dairy campaign.

Keep on rocking in the Free World.

An official tour of the Olympic Park in London for the world’s media got off to an inauspicious start this morning when the buses taking journalists from the stadium to the athletes’ village managed to get lost.

Granted, the Olympic Park covers a vast area, more on the scale of an airport than a village, but the sight of two double-decker buses having to execute awkward three-point turns does not bode well with barely a fortnight to go to London 2012…

The Olympic Village, which will be home to 15,500 athletes during the Games, feels more like a small city, with swish apartment blocks that will no doubt become highly sought-after private flats when they are converted into affordable homes and sold off next year.

Lush, stripy green lawns between the blocks are dotted with fun sculptures, including a three-piece Chesterfield suite cast in solid plastic (less tacky than it sounds) and a life-size gorilla. There is even a wildflower meadow which the athletes can jog around.

Each of the 11 apartment blocks has a different theme; I am writing from the lobby of a seaside-themed residence, with deck chairs outside, pebble-print rugs and photographs taken by schoolchildren on British beaches cheering up the walls (Harry, 14, from Humphry Davy School in Penzance has done a particularly splendid job).

In a cupboard under a television in the lobby are the obligatory holiday games of Jenga, Monopoly, Trivial Pursuit, dominoes and chess, still shrink-wrapped ready for when boredom sets in.