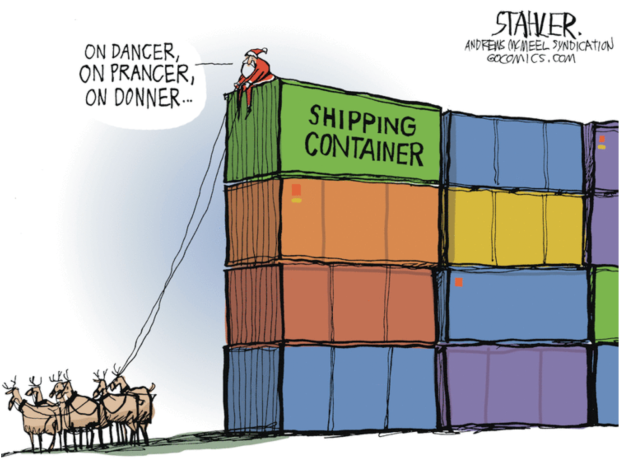 First, this is a global phenomenon. The reasons are the same, worldwide. Delays at a number of choke points, globally, have a consistent result. One that will take weeks and months to resolve.

Cargo ships are backed up in record numbers at U.S. ports, as Americans’ demand for imported goods runs up against the ability of shippers and transporters to unload those goods and transport them to warehouses and consumers.

But some social media posts claim, without citing evidence, that the Biden administration is keeping the ships backed up on purpose. They misleadingly imply the cargo backup is part of a plan to create shortages and later inflate fourth-quarter data to take credit for a strengthening economy…

In fact, cargo traffic has been rising since the pandemic took hold, as homebound Americans began ordering goods online, with a record number of ships waiting to enter ports at Los Angeles and Long Beach. Marine terminals and trucking companies have been unable to keep up with the volume, resulting in bottlenecks at ports and rail yards from California to New York.

RightWing nutballs are consistent in their communications practices. Once they decide on a new lie appropriate to whichever economic question they hope to exacerbate to their political advantage, they set to work with narrow focus and no verifiable facts or analysis. Rather like Trump’s campaign promises. If you are a True Believer of this kind of crap, you never worry about facts, anyway.

Not only are these logistics problems spreading globally, reaching epic numbers at gateway ports. the answers are the same around the world. Time, increasing competent personal (which usually requires increasing wages)…repeated over and again throughout the supply chains from point of manufacture to retail distribution.

It’s what I did for many years…when I wasn’t involved in sales. Though I’ve been retired for a couple decades, I’m getting job offers every day. A compliment, yes. But, retirement is good enough, thank you.

Prisons and jails have hosted some of the largest COVID-19 outbreaks in the U.S., with some facilities approaching 4,000 cases. In the U.S., which has some of the highest COVID-19 infection rates in the world, 9 in 100 people have had the virus; in U.S. prisons, the rate is 34 out of 100…

Even though prisons have policies for disease control, many of which include guidelines for correctional officers, prisons are at a disadvantage in stopping the spread of COVID-19. Current prison conditions – including poor ventilation, overcrowding and a lack of space for social distancing and isolation – make respiratory diseases like COVID-19 very difficult to control.

No surprises here. Just thought we’d point out something some of us know from the front and back of living in America.

The world is bracing for a new wave of Covid-19 infections, as the coronavirus pandemic has infected more than 200 million people and killed more than 4.3 million globally since late January 2020. Efforts many countries took to stamp out the pneumonia-like illness led to entire nations enforcing lockdowns, widespread halts of international travel, mass layoffs and battered financial markets. Recent attempts to revive social life and financial activities have resulted in another surge in cases and hospitalizations, though new drugs and improved care may help more people who get seriously ill survive…

The epicenter of the pandemic has continued to shift throughout the year, from China, then Europe, then the U.S., and now to developing countries like Brazil. Cases globally surpassed 10 million in late June, but ever since infections have been multiplying faster. The U.S. and India have the most infections, accounting for more than a third of all cases combined.

As countries loosen lockdowns in an effort to reboot their economies, many have seen a resurgence of infections. The number of new daily cases in the U.S. rose to record highs after some states relaxed social distancing requirements. Even places that successfully contained infections earlier in the year, like China and South Korea, have seen cases bubble back up…

The “worst is yet to come” given a lack of global solidarity, Tedros Adhanom Ghebreyesus, head of the World Health Organization, said at a briefing in Geneva on June 29.

The combination of ignorance and naiveté among Americans pretty much guarantees another deadly wave of illness and death. Personally, I stay away from my fellow Americans as much as possible.

I had to see one of the physicians in my life on one day’s notice, this morning…and he and his staff were as masked up and practicing the same safety protocols in place when this pandemic began. Politicians in DC may have lowered their standards. I doubt many medical practitioners have.

Researchers have found just 12 people are responsible for the bulk of the misleading claims and outright lies about COVID-19 vaccines that proliferate on Facebook, Instagram and Twitter.

“The ‘Disinformation Dozen‘ produce 65% of the shares of anti-vaccine misinformation on social media platforms,” said Imran Ahmed, chief executive officer of the Center for Countering Digital Hate, which identified the accounts.

After this story published on Thursday, Facebook said it had taken down more of the accounts run by these 12 individuals.

These figures are well-known to both researchers and the social networks. They include anti-vaccine activists, alternative health entrepreneurs and physicians. Some of them run multiple accounts across the different platforms. They often promote “natural health.” Some even sell supplements and books.

As usual, Facebook isn’t performing the simplest categories of self-checking misinformation and deception.

…Side effects are a natural part of the vaccination process, as my colleague Sarah Zhang has written. Not everyone will experience them. But the two COVID-19 vaccines cleared for emergency use in the United States, made by Pfizer/BioNTech and Moderna, already have reputations for raising the hackles of the immune system: In both companies’ clinical trials, at least a third of the volunteers ended up with symptoms such as headaches and fatigue; fevers like my husband’s were less common.

Dose No. 2 is more likely to pack a punch—in large part because the effects of the second shot build iteratively on the first. My husband, who’s a neurologist at Yale New Haven Hospital, is one of many who had a worse experience with his second shot than his first.

But much like any other learning process, in this one repetition is key. When hit with the second injection, the immune system recognizes the onslaught, and starts to take it even more seriously. The body’s encore act, uncomfortable though it might be, is evidence that the immune system is solidifying its defenses against the virus.

Side effects generally resolve quickly, whereas COVID-19 can bring on debilitating, months-long symptoms and has killed millions.

The big picture: The pandemic isn’t over. There are still big threats ahead of us and big problems to solve. But for all the things that have gone wrong over the past year, the vaccines themselves have shattered even the most ambitious expectations.

The vaccines represent a “stunning scientific achievement for the world … unprecedented in the history of vaccinology,” said Dan Barouch, an expert on virology and vaccines at Harvard, who worked on the Johnson & Johnson vaccine…

Most importantly, all the leading vaccines work extremely well.

All four vaccines or vaccine candidates in the U.S. — from Pfizer, Moderna, AstraZeneca and Johnson & Johnson — appear to prevent coronavirus deaths, and to offer total or near-total protection against serious illness.

RTFA. Engage with scientific facts and practice. Please, please, don’t wander off into the pop culture of profiteers, economic and ideological, who seek to line their pockets by encouraging fear and foolishness.

States are ramping up their Covid-19 vaccination programs so more people can be protected against the virus, but some governors are confused and angry because they don’t know how much vaccine the federal government will send them…

“The stockpile appears to be all on paper; they were tracking anticipated need but not actually holding back product,” Plescia said…

President-elect Joe Biden on Thursday announced a plan — as part of a wider $1.9 trillion economic rescue proposal — to send $350 billion to state, local and territorial governments.

The money will be used in part to help distribute the vaccine, as well as to increase testing, keep frontline workers employed, reopen schools and maintain vital services…

“Even now, we’ve gone from half a million a day to 750,000 (doses) a day. I believe strongly that it (1 million per day) is doable — and if we do it, stay on target to get the overwhelming majority of the country vaccinated,” said Fauci…

If you expected better than this from Trump and his Republican Party…I think I can get you a great deal on a bridge for sale in Brooklyn.