Receiving the Légion d’honneur and the Croix de Guerre

The remains of Josephine Baker, a famed French-American dancer, singer and actor who also worked with the French resistance during the second world war, will be moved to the Panthéon mausoleum in November, according to an aide to President Emmanuel Macron.

It will make Baker, who was born in Missouri in 1906 and buried in Monaco in 1975, the first Black woman to be laid to rest in the hallowed Parisian monument.

“She was an artist, the first Black international star, a muse of the cubists, a resistance fighter during the second world war in the French army, active alongside Martin Luther King in the civil rights fight,” the petition says.

Another member of the campaign group, Pascal Bruckner, said Baker “is a symbol of a France that is not racist, contrary to what some media groups say”, as well as “a true anti-fascist”…

The Panthéon is a memorial complex for great national figures in French history from the world of politics, culture and science.

Josephine Baker was a significant African-American talent in dance, music and film in the United States. A brave anti-fascist fighter in the French Underground during World War 2. Activist in the US civil rights movement.

❝ The three injured children and a fourth child were all in the truck with William Devaughn Smith, Arbeitman said. The bureau initially said two children were shot but later learned a third child was also struck. Officials did not immediately release the names, ages or conditions of the children.

❝ Smith was treated and released at a hospital in Paris, Texas, about 30 miles south of Hugo…Paris Police Chief Bob Hundle said he did not know the details of what happened in Hugo but that his officers took Smith into custody so that he could be booked at the Lamar County, Texas, jail on a warrant for aggravated robbery.

All Power to the people!

Some feelings never mellow with age.

I doubt anyone wants drill rigs added to this view

❝ France’s ban on oil drilling could keep 5 billion barrels in the ground. For a country that already imports 99 percent of its oil, France’s decision to end all new oil development and phase out existing projects by 2040 may not seem all that meaningful. The Guardian called it a “largely symbolic gesture.”

But actually, as geoscientist Erik Klemetti noted, France is committing to keeping a massive oil reservoir in the ground. The Paris Basin, a region in northern France, may contain nearly as much underground petroleum as the huge Bakken Formation in North Dakota. Extracting that oil and gas would require extensive fracking.

❝ Instead, France decided to say au revoir to oil and gas altogether.

❝ If you’re making travel plans for 2016, these ten places are the best adventure trips for photographers to explore and photograph this year.

❝ For photographers seeking inspiration, or adventure-seeking travelers looking to explore, we’ve put together a list of our favorite adventure trips to take this year.

Beyond their beauty, we believe these locations have more to offer than you might initially think. From hidden caves along the Oregon Coast, to snow-capped mountains in Japan, the following locations are not only worth photographing, but also traveling to see a few sites you might not know exist.

One of the delights of making it to being an old fart is memories – and visual reminders/your own photographs – of the places you visited that stick in your mind for their beauty. I’ve been to a few of these places and they are among my favorites.

Thanks to Om Malik for the reminder. 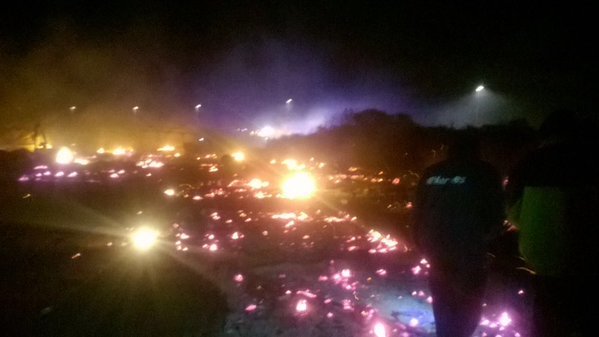 The refugee camp known as “the jungle,” in the French port of Calais, was set on fire Friday night just hours after a series of coordinated attacks rocked Paris, leaving over 120 dead and hundreds injured.

Local authorities have not confirmed yet a connection between the two events, but the coincidence has prompted speculation that the fires were set as revenge, despite a lack of proof.

Sherlock Holmes’ response to coincidence is worth recalling: “The universe is rarely so lazy”

Organizations on the ground have said on social media that the damage had been caused by a small fire that got out of control. According to unconfirmed reports around 40 makeshift homes were destroyed, but no refugees sustained any injuries.

At least 15 refugees have lost their lives in Calais since the end of June while trying to make their way through the undersea passage into the United Kingdom. Some 6,000 people are living in the “jungle.” Most of them are fleeing conflict-hit zones in the Middle East and Africa.

The situation in Calais is part of the current refugee crisis across Europe. According to the International Organization for Migration, 773,244 refugees have reached Europe’s shores so far this year, while a total of 3,423 people have either died or gone missing.

The beat goes on…

With the eight lanes of France’s most famous avenue cleared of all traffic on Paris’s first car-free day, the usual cacophony of car-revving and thundering motorbike engines had given way to the squeak of bicycle wheels, the clatter of skateboards, the laughter of children on rollerblades and even the gentle rustling of wind in the trees. It was, as one Parisian pensioner observed as she ambled up the centre of the road taking big gulps of air, “like a headache lifting”.

There were other weird and pleasant effects of this tiny glimpse of carless utopia. “Everyone seems to be smiling, and not as stressed,” marvelled Elisabeth Pagnac, a civil servant in her 50s, who had been emboldened to cycle in from the eastern edge of the city without a helmet. But strangest of all was the sky.

“I live high in a tower block in the east of the city and looking out of my window today I saw the difference straight away: the sky has never been this blue, it really is different without a hazy layer of pollution hanging in the air,” she said.

Others agreed that looking up towards the Arc de Triomphe and to La Défense beyond, a view that was so often hazy and distorted by the city’s famous smog was suddenly crystal clear.

“What a joy to go down the middle of the road taking in the sights,” said Claude Noirault, a wheelchair-basketball coach, who had done 10km in his sports wheelchair and was planning 30km more.

When Anne Hidalgo, the mayor of Paris, launched the idea of the French capital’s first car-free day at the suggestion of the collective Paris Without Cars, pollution was top of the agenda…

Hidalgo, launching the event with other mayors who have already pioneered car-free days, including the mayor of Brussels, said the initiative showed people “are not obliged to move around in a personal car, there are other ways to approach mobility in a city”.

It wasn’t a complete success. RTFA. The sophistry brigade will find plenty to whine about, Left or Right.

The core commitment to a day without fossil fuel pollution in the City of Light let in lots of sunlight. A fresh beginning.