Doesn’t matter where this photo was taken. What counts is in the image.

❝ …In a town where not even the longtime operation of the federal government seems certain, Mr. Trump has adhered to one constant: a conspicuously sun-kissed glow, one that has shone like a stoplight against Washington’s graying backdrop. Much like Warhol’s shock of white hair or Big Bird’s saffron plumage, the president’s vibrant hue is so consistently present and meticulously maintained that it was a culturally embedded representation of him long before he entered politics.

❝ The official line from the White House, as with other matters surrounding the president’s physical health and appearance, is that Mr. Trump’s glow is the result of “good genes,” according to a senior administration official who would speak only on the condition of anonymity…

❝ Aside from a tanning bed, another plausible theory is that Mr. Trump uses self-tanning creams or lotions. Dr. Tina Alster, a top Washington dermatologist who said she had treated officials in every White House, including this one, posited that the president, whom she does not treat, was using tanning creams or sprays to achieve his look.

“He looks more orangy than he does tan,” a telltale sign, Dr. Alster said.

Of course, what he really needs is some sort of treatment which decreases his penchant for lying. But, then, he’d probably be out of a job. Sooner rather than 2020.

A conservative North Dakota lawmaker has come out of the closet after lewd texts he sent on a gay dating site were made public this week.

The randy red-state Republican, Rep. Randy Boehning, was outed Monday, more than a month after the Roughrider State legislator sent an unsolicited picture of his penis and several other messages to 21-year-old Bismarck resident Dustin Smith back on March 12 on the gay dating site Grindr…

Boehning, a 12-year veteran of North Dakota’s state assembly who has routinely voted against gay rights legislation, charged that the leaked messages were sent to media outlets in retaliation for his vote against Senate Bill 2279, which would have added sexual orientation to the state’s anti-discrimination law. For the third time since 2009, the bill was voted down by conservative North Dakota lawmakers, including Boehning.

But Smith, who first leaked the Grindr messages to The Forum, claims he simply wanted to reveal Boehning’s hypocrisy.

“How can you discriminate against the person you’re trying to pick up?” Smith told the local Bismark-area newspaper…

Boehning, 52 and unmarried, has been an active member of the site and conducted his affairs under the profile name “Top Man!,” Smith said.

“Seems I haven’t found mister right yet, so need to keep looking for and having fun on the way! Hit me up boys,” Boehning’s Grindr bio reads.

Another conservative who’s never going to make it into a Republican rewrite of Profiles in Courage. I wonder if he’ll have the ingterity – now – to change the way he votes on civil rights for LGBT folks.

In freezing fog on an Oregon Interstate, Kaleb whitby slid his pickup truck into the butt end of a jackknifed, crashed semi. And then he saw another tractor-trailer sliding straight at him.

He gripped the steering wheel as tight as he could – and the second semi smashed through his pickup, crushing it.

The crash left only two things sort of intact: The twisted cab surrounding Whitby’s, and Whitby, pinned between the two trucks.

26 vehicles piled up in that crash.

One of the truck drivers asked Whitby if he could take this photo as they were figuring out how to get him free. Whitby said it was OK. No one would have believed this if it was described to them, no doubt.

They pulled his feet loose – and he slid out what used to be the driver’s side window.

He ended up with a couple of band-aids on small cuts and an icepack for a lump on his head. Oh, yeah, and then he got busy helping other folks from their cars before he let anyone drive him home. 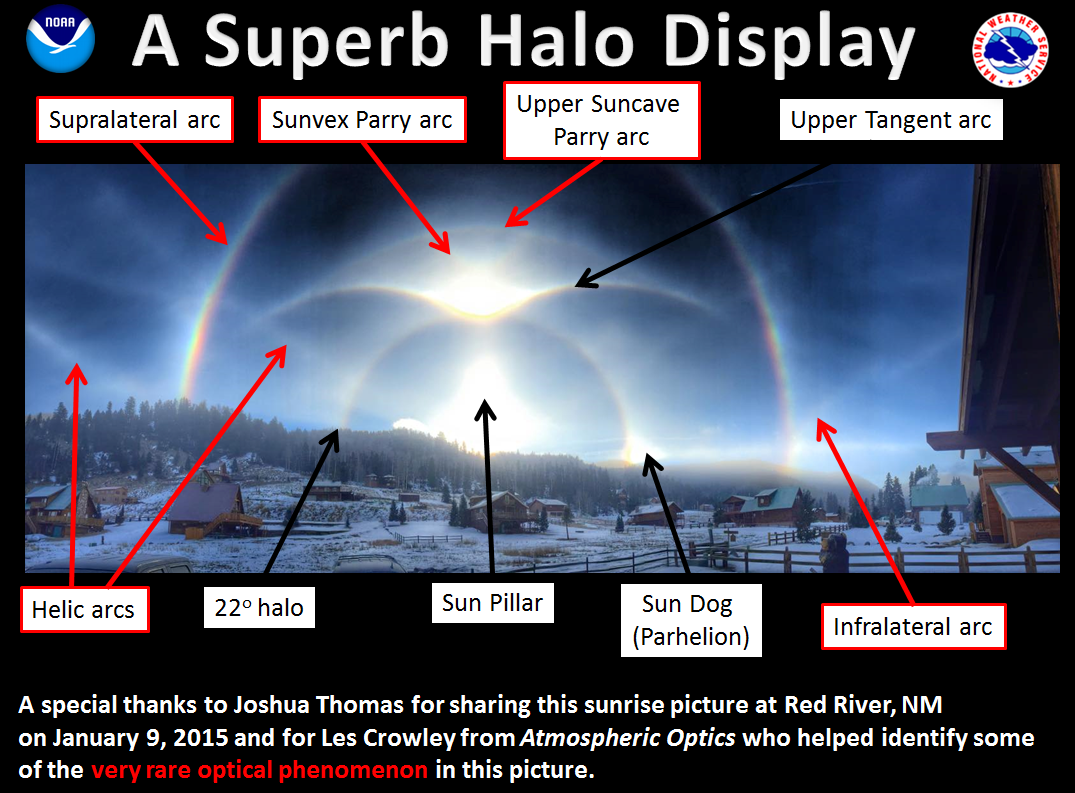 A photographer from Texas, Joshua Thomas, recently captured a photo in New Mexico of a rare ice crystal halo phenomenon.

In order to point out the interesting details in the photo, the US National Weather Service of La Crosse, Wisconsin made the photo into a diagram that shows the different aspects of the halo.

The phenomenon occurs when minuscule ice crystals in the atmosphere reflect and refract light in a certain way. The halos can be created by light from the sun or the moon, and seeing one often means there will be some kind of precipitation within the following 24 hours.

Delightful. A good reason to go outdoors in the winter. 🙂

The Iraqi soldier died attempting to pull himself up over the dashboard of his truck. The flames engulfed his vehicle and incinerated his body, turning him to dusty ash and blackened bone. In a photograph taken soon afterward, the soldier’s hand reaches out of the shattered windshield, which frames his face and chest. The colors and textures of his hand and shoulders look like those of the scorched and rusted metal around him. Fire has destroyed most of his features, leaving behind a skeletal face, fixed in a final rictus. He stares without eyes.

On February 28, 1991, Kenneth Jarecke stood in front of the charred man, parked amid the carbonized bodies of his fellow soldiers, and photographed him. At one point, before he died this dramatic mid-retreat death, the soldier had had a name. He’d fought in Saddam Hussein’s army and had a rank and an assignment and a unit. He might have been devoted to the dictator who sent him to occupy Kuwait and fight the Americans. Or he might have been an unlucky young man with no prospects, recruited off the streets of Baghdad.

Jarecke took the picture just before a ceasefire officially ended Operation Desert Storm—the U.S.-led military action that drove Saddam Hussein and his troops out of Kuwait, which they had annexed and occupied the previous August. The image and its anonymous subject might have come to symbolize the Gulf War. Instead, it went unpublished in the United States, not because of military obstruction but because of editorial choices.

RTFA for a sensitive, thoughtful discussion – decades after this young man was killed. My hatred for war is no surprise to any of our regular readers. Even the only “just” war in my lifetime – the war against fascism, World War 2.

That war produced two books which have guided my whole life – in war and peace, about war and peace. I doubt if either are easily available anymore. BEACH RED by Peter Bowman is a short novel in what he called sprung prose, as much poetry as prose – as much about death and dying as anything else. DAYS AND NIGHTS by Konstantin Simonov is a heroic tale from a journalist who lived through the siege of Stalingrad. It is a love story.

Photographs like this are also an important part of how we look at war. Outside of dispatches published in newspapers; curt, prosaic sound bites on TV. As hard as it is to look at this photo, I think it should be a required part of anyone’s education.

In 2011, British wildlife photographer David Slater traveled to Indonesia. He set up his equipment to take a photo of a crested black macaque. Suddenly, the monkey grabbed Slater’s camera and started to take selfies. As you can imagine, the selfies were hilarious and adorable, and the photos went viral as soon as they hit the Internet…

This sounds like an incredible opportunity for a photographer, right? Wrong. The photo eventually ended up on Wikipedia, as well as on Wikimedia Commons, an arm of the Wikimedia Foundation that hosts photos that are in the public domain and therefore free to use. Slater asked Wikimedia to take the photo down, arguing that the copyright belongs to him, and that he should get paid whenever someone wants to use the photo.

But Wikimedia has refused to remove the photo, since it was technically taken by the monkey, not by Slater…

Slater accused Wikipedia, which mentioned the monkey selfie in a recent transparency report, of “making a news story” of the issue. He added that he believes Wikipedia editors, most of whom are volunteers, “have a communistic view of life…”

He urged people to stop using Wikipedia. “It’s important to tell people that Wikipedia should be not used as a source of truth,” he said.

Katherine Maher, a spokeswoman for Wikimedia, emailed the following statement to HuffPost:

We take these assessments very seriously, and researched both sides of the argument. We didn’t think the monkey owned the copyright — instead, our assessment was that there’s no one who owns the copyright. That means that the image falls into the public domain.

Meanwhile, the monkey seems to be enjoying the whole kerfuffle.

A battle-scarred male southern elephant seal at Gold Harbour, South Georgia, in the South Atlantic. He had just fought oﬀ rivals to secure a harem of females. 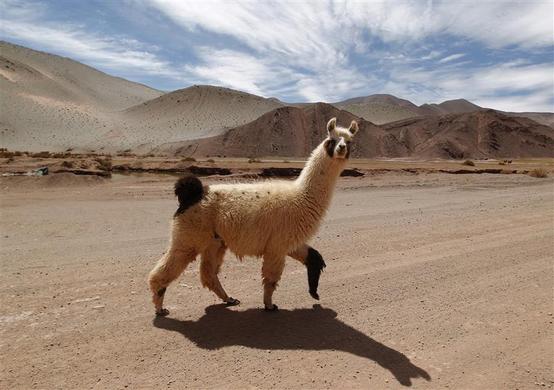 Of course it’s to get to the other side. Llamas aren’t silly.