Count the silverware. There’s nothing in the Crooks Handbook that says a fraud can’t also be a thief.

Net neutrality proponents now have less than two weeks to convince 38 House lawmakers to support an effort to overturn the Federal Communications Commission’s repeal of net neutrality. Seventeen of those votes could come from Democrats who have yet to sign on—all of whom have received significant contributions from internet service providers such as Comcast.

And that says it all for me. Nice middle-of-the-road folks active in electoral politics get pissed-off at me when I say, “A plague on both their houses” – the Dems and Republican Party. Aside from the minority of progressive activists who survive the electoral shuffle, pretty much everyone else has their hand out to corporate and wealthy donors. That’s who owns their guts. That’s who calls the tune they dance to.

They often require as much arm-twisting to support positive progressive legislation as overt bigots and populist pimps.

Over and over again, fools who think flags and fake presidents will bring them the riches and power reserved only for those who actually own America…get what history reserves for those who believe in patriotism over peace, slogans instead of the steady march of science and technology, peasant ideology over knowledge, collaborating with political thugs who twist and bend life into death.

❝ Everyone saw the hackers coming…The National Security Agency in Washington picked up the signs. So did Emmanuel Macron’s bare-bones technology team. And mindful of what happened in the American presidential campaign, the team created dozens of false email accounts, complete with phony documents, to confuse the attackers.

❝ The Russians, for their part, were rushed and a bit sloppy, leaving a trail of evidence that was not enough to prove for certain they were working for the government of President Vladimir V. Putin but which strongly suggested they were part of his broader “information warfare” campaign…

But that outcome was hardly assured on Friday night, when what was described as a “massive” hacking attack suddenly put Mr. Macron’s electoral chances in jeopardy. To French and American officials, however, it was hardly a surprise.

❝ …The staff at Mr. Macron’s makeshift headquarters in the 15th Arrondissement at the edge of Paris didn’t need the N.S.A. to tell them they were being targeted: In December, after the former investment banker and finance minister had emerged as easily the most anti-Russian, pro-NATO and pro-European Union candidate in the presidential race, they began receiving phishing emails.

Even before then, the Macron campaign had begun looking for ways to make life a little harder for the Russians, showing a level of skill and ingenuity that was missing in Hillary Clinton’s presidential campaign and at the Democratic National Committee, which had minimal security protections and for months ignored F.B.I. warnings that its computer system had been penetrated.

❝ “We went on a counteroffensive,” digital director, Mounir Mahjoubi said. “We couldn’t guarantee 100 percent protection” from the attacks, “so we asked: what can we do?” Mr. Mahjoubi opted for a classic “cyber-blurring” strategy, well known to banks and corporations, creating false email accounts and filled them with phony documents the way a bank teller keeps fake bills in the cash drawer in case of a robbery…

Mr. Mahjoubi refused to reveal the nature of the false documents that were created, or to say whether, in the Friday document dump that was the result of the hacking campaign, there were false documents created by the Macron campaign.

But he did note that in the mishmash that constituted the Friday dump, there were some authentic documents, some phony documents of the hackers’ own manufacture, some stolen documents from various companies, and some false emails created by the campaign.

❝ “It’s clear they were rushed,” Mr. Hultquist said. “If this was APT28,” he said, using the name for a Russian group believed to be linked to the GRU, a military intelligence agency, “they have been caught in the act, and it has backfired for them.”

Russian hackers were dealing with not only a better educated populace; but, a more sophisticated audience than American voters. LePen and her populist campaign had to walk away from the most backwards aspects of campaigns her father would have run twenty or thirty years ago. She could not substitute anti-Semitism for Trump’s anti-Mexican slurs – as her father would have.

Trump’s dalliance in misogynist assaults might have cynical appeal to fools in France – as they do in the United States. But, Trump’s contempt for physically-handicapped wouldn’t play – for example – in a nation where until recently public transport still reserved front seats for victims of war.

The French shrugged off Big Lies because they knew from experience what the population in general was gifted by populist liars – and their supporters, domestic or foreign. 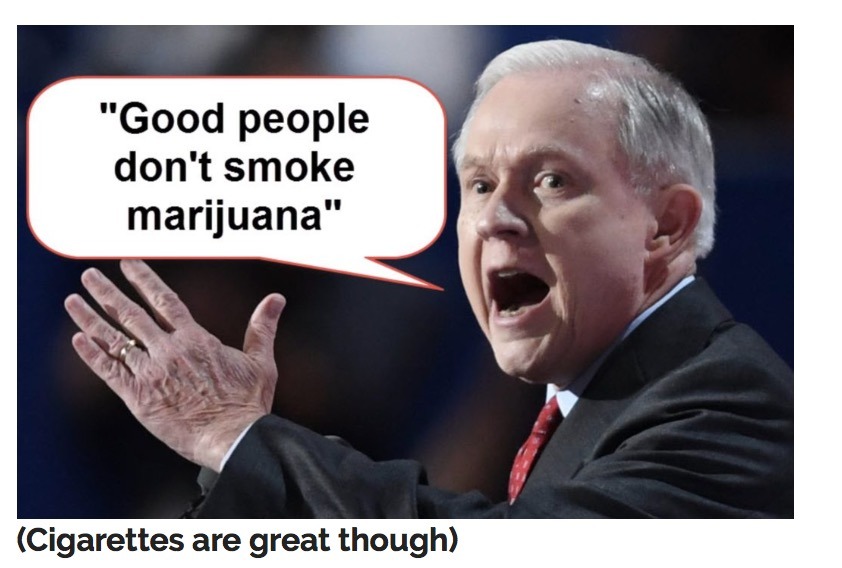 “I am astonished to hear people suggest that we can solve our heroin crisis by legalizing marijuana — so people can trade one life-wrecking dependency for another that’s only slightly less awful,” said Sessions. He went on to call for a revival of hardline ’80s- and ‘90s-style “educating people and telling them the terrible truth about drugs.”

❝ For someone on a bar stool arguing with his friends, this would be a stupid but harmless “hot take.” But for the top law enforcement official in a nation of 320 million people, it’s a malicious string of lies intended to justify dangerous policies.

❝ Sessions’ mockery of the idea that marijuana could help people struggling with opiate addiction is especially frustrating to Steve Miller, who retired as a sergeant after 18 years on a suburban Detroit police force and now works as a private investigator at a lawfirm specializing in medical marijuana cases.

“He’s out of reality in that statement. Marijuana has proven to be very beneficial medically for people. And there are studies coming out now showing it is helping people get off their opiate and heroin addictions, and showing it helps kick alcohol addiction as well,” Miller, one of many law enforcement professionals who advocates to end marijuana prohibition, told ThinkProgress. “I don’t know where his medical training comes from that he makes these statements.”

❝ The idea that routine marijuana use is a “life-wrecking dependency…only slightly less awful” than heroin addiction is also medically absurd. Once chemically dependent upon heroin, the human body will tear itself apart if forcibly deprived of the drug. A heroin addict pursuing her next hit or pill is fleeing hours and hours of vomiting, diarrhea, and muscle pain. Someone deprived of their nightly joint might be a little cranky, a little on edge, a little less hungry the next day when they get up and go to work…

❝ Miller…is familiar with the kind of intractable mythologizing of marijuana that the United States Attorney General is reviving today…“Some people are more comfortable believing the lies they have been told by their government for 80 years. You can blast people with science as much as you want, but they just don’t want to believe it,” he said.

“He’s entitled to his feelings. But don’t push that agenda on a public where 71 percent think it should be legal.”

Sessions is representative of the backwards-looking, hardly ever-thinking populism that ranges from Right to Left. Most of the big numbers for that sort of rejoicing in ignorance occupy the Right. Witness the dedicated-to-ignorance brigade that marches from demographics about to be screwed to the economic wall of budget cuts for everything from education to meteorology, science to food safety.

Ignorance ain’t bliss when your kith and kin are threatened. Advancements prohibited by tiny-minded bigots are simply removed from folks’ lives before they can be adopted. Won’t make folks any healthier.