Porsche said Monday that it plans to build and operate a solar power microgrid at its U.S. headquarters in Atlanta, reducing its annual carbon emissions by 3.2 million pounds. The news came days after Ford announced what it called the largest-ever renewable energy purchase from a utility in the U.S., to power its electricity supply in Michigan with renewable energy.

The installation of Porsche’s microgrid, an on-site electrical network that harnesses power from solar panels, will begin in September and conclude in 2023. The renewable energy project is part of a $50 million development at the Porsche Experience Center campus in Atlanta.

Porsche’s 25-year operating agreement with Cherry Street Energy, the largest non-utility provider of solar energy in Georgia, will power Porsche’s on-site fleet of Taycan EVs, among other applications. The energy company will own, operate and maintain the microgrid, selling the power to Porsche.

…The concept is pretty alluring: take a vintage car and all the great things that go with it— looks, backstory, rarity; and add the best of modern driving — comfort, eco-friendliness, not breaking down every time you drive it.

In a corner of this field is a newer crop, where past and present collide to even more dramatic effect — electrified restomods. Here, the guts of the original car are ripped out entirely and transplanted with electric motors, batteries and circuitry.

Yes, this costs more than the average family budget allots for motor vehicles. But, like any new-tech solutions, electrification of classics should become cheaper over time. I’d love to try it on with an XK150 Jaguar coupe.

The purist car geeks will be aghast at the concept; but, then, they’d look askance at preferring an XK150 over an XK120, anyway. 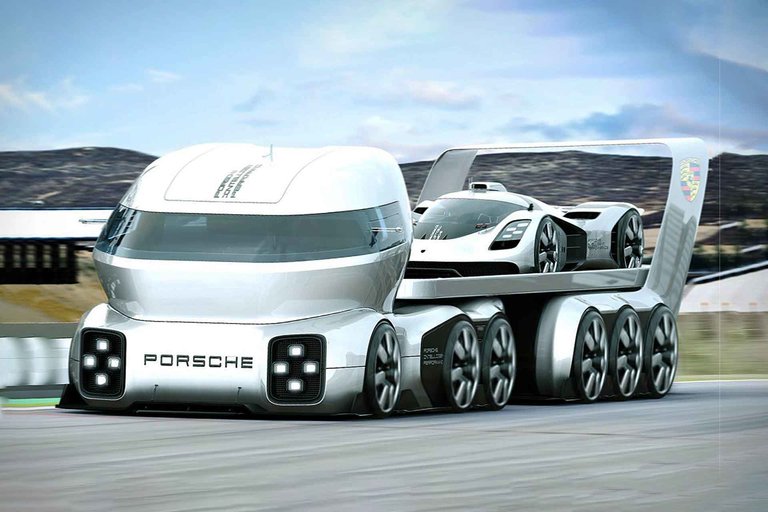 ❝ Electric motors are round. Wheels are round. It’s a pretty natural impulse to combine the two. No lesser automotive luminary than Dr. Ferdinand Porsche did it first, inventing the wheel-hub motor in 1897. He mounted two of them to his front-driven battery-electric prototype “Lohner-Porsche.” Three years later he invented the gas-electric hybrid by fitting four hub motors to his elaborate four-ton “Mixte” coach. The one tiny rub: Those 14-hp motors weighed around 320 pounds. Each.

Modern materials and engineering have enabled dramatic improvements. For about seven years, Protean Electric has been selling a 100-hp hub motor that weighs just 68 pounds. So why do all volume-produced EVs still mount their motors inboard? To minimize unsprung weight for optimal ride quality.

❝ Enter Silicon Valley inventor and serial startup founder Marcus Hays and co-inventor Scott Streeter. They wondered if it might be possible to develop a wheel and motor system that weighed no more than a conventional aluminum wheel…Without the gear reduction of a body-mounted motor, a hub motor needs high torque to act through the 1-foot lever arm from the hub to the contact patch. Wheels then need hefty structure to transmit these acceleration, braking, and cornering forces between the hub and the rim.

Hays’ radical solution: do away with the hub entirely and power the rim…

❝ Mass, cost, and rotational inertia instantly plunge with this approach. Mounting the motor so that it drives a rim-mounted ring gear…lowers the required torque to get the wheel spinning. It also greatly increases the electric motor’s top speed. And guess what? Motors wound for high rpm instead of high torque, like those on a drone copter, can deliver the same power as high-torque motors using vastly less copper and hence weighing one-twentieth as much. Bam — a cost- and weight-savings twofer.

RTFA. Reanalysis of how and why electric power can be delivered to the road for transit – private or public-size vehicles – much more efficiently.

Italy in the winter of tracking tax evaders

At checkpoints, including one adjacent to the fashionable Corso Como, the police got the driver’s license and registration, which they passed on to the national tax agency. The tax authorities will use the data to check if the cars’ owners had declared enough income — and of course paid the right amount of income taxes — to justify their lifestyles.

It was at least the fifth raid targeting wealthy Italians since a Dec. 30 sweep at the posh Cortina d’Ampezzo ski resort, where 251 high-end cars were stopped, including Ferrari and Lamborghini supercars… Rome, Portofino on the Italian Riviera and Florence have also been targeted…

Italian authorities are applying to luxury-car owners the same logic they displayed more than a year ago, when tax agents started tracking down the owners of yachts berthed in Italy’s harbors to see if they were current on their tax payments.

In the raid in Cortina D’Ampezzo, tax agents found that 42 luxury car owners had declared income of less than 30,000 euros for 2010 and 2009. Another 19 luxury cars were owned by businesses which posted a loss in the previous year. The sweep in Florence discovered a builder with no tax record who was driving a Mercedes with his wife who was receiving social assistance. Tax officials also found a German owner of a BMW X5 SUV with no declared income, according to the website of the tax agency’s Florence office.

This is serious stuff for the government, which estimates that tax evasion costs the country about 120 billion euros a year in lost revenue…

The collection effort is part of Prime Minister Mario Monti’s plan to curb record borrowing costs on Italy’s 1.9 trillion-euro debt and avoid following Greece, Portugal and Ireland which all had to seek bailouts.

Demand for vehicles from the likes of Ferrari and Maserati brands and Lamborghini slumped 53 percent in January, with just 66 supercars sold, according to Anfia, the association of Italian carmakers. The new taxes and high-profile dragnets have also sent exotic-car prices down 20 percent, according to dealer association Federauto…

Still, for Ferrari, which earns higher profit margins than any other Fiat unit, it’s not the end of the world. There’s plenty of demand outside Italy for the company’s sports cars.

“Italy isn’t a concern for Ferrari as it sells its cars abroad,” Marchionne said last month in Detroit.

I wonder what people like John Boehner and Harry Reid intend to drive when they retire from Congress – and they no longer have to lie quite as much as they do now about what they really care about.

When in Monte Carlo, everything is done in style. And that includes crashing your car.

This was the moment when a woman driver caused a £700,000 five-car pile-up as her Bentley collided with a Mercedes, Ferrari, Porsche and Aston Martin.

Disaster struck as the hapless blonde negotiated the traffic around the Place du Casino in her £250,000 Bentley Azure. The driver of a white Mercedes S Class worth £75,000 was the first victim as the 2.7-ton Bentley scraped down the side of it before ploughing into a £143,000 black Ferrari F430.

Hope you’re insured, madam: A policeman tries to sort out the chaos beside Monte Carlo’s Place du Casino
An Aston Martin Rapide worth £150,000 and an £80,000 Porsche 911 also came a cropper. The driver and her two passengers then suffered the embarrassment of being surrounded by tourists as they were unable to open the doors of the convertible.

It is estimated the crash will cost more than £40,000 with the Ferrari, Porsche and Aston Martin requiring new front wings and bumpers. The Bentley will need the same repairs, plus a new door.

Chaos: A staggering £685,000 worth of supercars were involved in the inpromptu game of demolition derby
Ruud Poot, editor of European motoring website Autogespot, said: ‘You probably couldn’t find a worse place in the world to crash your car than outside Monaco’s Place du Casino in the middle of the summer.’

Maybe she thought she was practicing for next year’s Formula One race – everyone was supposed to get out of her way.

Porsche has rolled out a race-bred version of the company’s 918 Spyder Concept at this year’s Detroit Auto Show. Packing the same drivetrain as the track-proven 911 GT3 R Hybrid race car, Porsche says that the 918 RSR will bring a whopping 767 combined horsepower to the party when it shows up in the paddock. A total of 563 of those ponies are provided by a 6.2-liter V8 that revs to an atmospheric 10,300 rpm. Porsche has partnered its beastly eight-pot with two electric motors capable of 75 kilowatts of juice positioned at each front wheel.

The 918 RSR stores braking energy in a flywheel accumulator stationed where the passenger seat would traditionally rest, and the tech allows the driver to summon up an extra bump in power for passing or acceleration. The pilot can command the boost in grunt for up to eight seconds.

Like the 918 Concept, the bones of the 918 RSR are built of carbon fiber reinforced plastic, and the body was penned to pay respect the legendary racers like the 917 short-tail.

Phew! I don’t know. Maybe if I was as young as my brain thinks I am. And as wealthy as some Republicans think they are…

END_OF_DOCUMENT_TOKEN_TO_BE_REPLACED

Porsche has confirmed it will make a production version of the 918 Spyder hybrid supercar that it displayed at this year’s Geneva motor show.

The gloriously adventurous mid-engined sports car was one of the hits of the show, with Porsche having not told anyone it was planning to display the 918 before it appeared on the stand. From the moment of its unveiling there was intense speculation that Porsche would build the car, and this was backed up by senior execs admitting that Porsche has a history of always putting its concepts into production…

The petrol electric hybrid is claimed to emit just 70g/km of CO2, and the concept was said to be capable of going as far as 94.1 miles for every gallon of fuel.

There are no indications on further details such as speed, performance or price, but Porsche has promised that it will tell us more in the coming months. We can’t wait.

The usual view one has of a car like this

What this proves is that the engineering and technology already exists to combine power, fun – economy and cleaner running. The hard bit is making it affordable.