A team of researchers in the Netherlands has discovered that potatoes can grow in earth fed by salty sea water.
The development could spark a revolution in the way food is produced in land previously considered unsuitable for agriculture.

Anna Holligan reports from the Dutch island of Texel.

While researchers think of islands and saltwater coasts – my first response went straight to inland geologies like New Mexico. Most underground water, aquifers, here, are of brackish water.

Nice to know we can do more than raise shrimp and crawdads.

With unpredictable annual rainfall and drought once every five years, climate change presents challenges to feeding Ethiopia. Adapting to a warming world, the potato is becoming a more important crop there – with the potential to feed much of Africa…

Ethiopia sits on the brink of thriving financial and gross domestic product forecasts, as its government formally merges green economics with climate-change resilient policies. But the country’s agricultural economy suffers from poor cultivation practices and frequent drought. However, new efforts – including Semagn-Asredie Kolech’s research – are beginning to fortify the country’s agricultural resilience, reducing the threat of starvation and bringing on the rising possibility of exporting potatoes to other African countries.

Annually, Ethiopian farmers plant potatoes in the spring and late summer. Yet, they still search for optimum planting dates and vie for vibrant drought-tolerant varieties if planted in the short-rain season, and sidestepping late blight, if planted in the longer rainy season.

At an Atkinson Center for a Sustainable Future forum in March, Kolech presented preliminary research gathered last summer. He surveyed Ethiopian farmers in potato-growing regions to understand their varietal inventory and crop practices. Farmers tried new varieties, but they often reverted back to using their traditional cultivars…

Kolech said that he found that the usage drop-off is due mostly to poor storage quality. New varieties have good attributes, such as high yield and late blight resistance, but in northwestern Ethiopia where more than 40 percent of potatoes are grown, the potato color and taste changes in storage earlier than the local varieties…

The environmental and economic prospects for Ethiopia are so intriguing, this June five Cornell faculty members…will travel with Kolech to Ethiopia to meet with potential government and nongovernmental collaborators. Their travel will be funded by Cornell’s Atkinson Center for a Sustainable Future and a collaborative CARE-Cornell Impact through Innovation Fund.

Bravo! The sort of activist education and research that helps define a leading university. 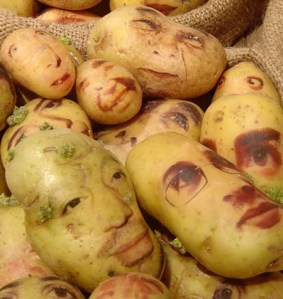 US planemaker Boeing used an unusual substitute for passengers to test its in-flight wi-fi system – potatoes.

Passenger seats on a decommissioned plane were loaded with huge sacks of the tubers for several days as signal strengths were checked.

The company’s researchers say that potatoes “interact” with electronic signals in a similar way to humans…The technique also took advantage of the fact that spuds – unlike humans – never get bored.

Boeing’s engineers did a number of tests to ensure that passengers would get the strongest possible wi-fi signal while in the air, all while meeting safety standards that protect against interference with an aircraft’s electrical systems…

“You want your laptop to work anywhere it’s located on your seat, [but] there can be significant signal changes just due to the location of the laptop,” said Boeing engineer Dennis Lewis.

To test the signal distribution, the firm turned to spuds instead of human test subjects, filling the seats with 20,000lbs (9,000kg) of potatoes in sacks.

According to Boeing, potatoes’ “interactions” with electronic signals mimic those of a human body, making them “the perfect stand-in for people who would otherwise have had to sit motionless for days while the data was gathered”.

Seems perfectly clear to me. 🙂

Is pizza a vegetable? Maybe not in most homes, but in public school cafeterias it is.

School meals that are subsidized by the government are required to contain a certain minimum of vegetables under current rules, and a serving of pizza that contains at least two tablespoons of tomato sauce meets the veggie requirement. The Obama administration recently sought to change the rule so that only a half-cup of tomato paste or more could be counted as a vegetable — part of their efforts to cut back on the amount of pizza, French fries and other “unhealthy” foods showing up on school lunch trays.

But the food industry and some lawmakers are pushing back. On Monday, Congress released the final version of a spending bill that would block the new tomato-paste rule, essentially keeping pizza in the vegetable category. The bill would also eliminate other changes the U.S. Department of Agriculture had proposed, like increasing whole grains in school meals and limiting the use of starchy vegetables to two servings a week, which would have cut back on the fries served daily at many schools.

As the Associated Press reports…food companies that produce frozen pizzas for schools, the salt industry and potato growers requested the changes and lobbied Congress….

Piling on to the companies’ opposition, some conservatives argue that the federal government shouldn’t tell children what to eat. In a summary of the bill, Republicans on the House Appropriations Committee said the changes would “prevent overly burdensome and costly regulations and…provide greater flexibility for local school districts to improve the nutritional quality of meals.” School districts have said some of the USDA proposals go too far and cost too much when budgets are extremely tight.

Which is a crock! Not much different from the days of “states rights” used to protect bigotry. Only this is used to protect the industries paying to keep your friendly neighborhood fat-and-salt laden Congress-critter in office.

As someone who cares specially for the Mediterranean portion of my family who taught me to prepare something more than Haggis – I make a delightful pissaladière along with dozens of variations on pizza from scratch. But, even one covered in onions only counts halfway as vegetable. The crappy nutrition designed by lobbyists from the American fast-food industry is matched in our schools only by the crappy education that satisfies our politicians.

Russian police say they have detained a man who was caught eating an acquaintance’s liver.

Police tracked down the suspect after a trail of severed body parts including limbs and a head were found across Moscow.

“When the police came to arrest the suspect, he was eating a human liver with potatoes,” a police spokeswoman for the Moscow’s western district said by telephone.

The rest of the human liver was found in a refrigerator in the suspect’s flat. The police spokeswoman said the cause of the acquaintance’s death was not clear.

What’s obvious is that the suspect knows nothing about proper pairing of ingredients in a meal. He was lacking onions.

McDonald’s Corp, the largest purchaser of potatoes in the United States, has agreed to take preliminary steps to reduce pesticide use in its domestic potato supply.

Following the agreement, the Bard College Endowment, Newground Social Investment and the AFL-CIO Reserve Fund withdrew a shareholder proposal that, if approved, would have required the company to publish a report on options for cutting pesticide use in its supply chain…

“Because McDonald’s has such a commanding presence in the marketplace, this commitment offers the promise of significant reductions of pesticide use — which will benefit consumer health, as well as farm workers, local agricultural communities and the environment,” said Newground Social Investment Chief Executive Bruce Herbert, who is also a member of the Board of Directors of the Institute for Children’s Environmental Health.

Had the agreement not been reached, the resolution would have appeared in the company’s upcoming proxy statement and come up for a vote at the company’s shareholder meeting later this year…

Dr. Richard Liroff said food companies such as Sysco Corp, General Mills Inc and Campbell Soup Co have already shown that cutting pesticide use can makes sense from both an environmental health and business perspective.

Why does this sound like “we’re proud to announce we’re studying how to put less rat poison in your hotdogs”?

With governments having trouble feeding the growing number of hungry poor and grain prices fluctuating wildly, food scientists are proposing a novel solution for the global food crisis: Let them eat potatoes.

Grains like wheat and rice have long been staples of diets in most of the world and the main currency of food aid. Now, a number of scientists, nutritionists and aid specialists are increasingly convinced that the humble spud should be playing a much larger role to ensure a steady supply of food in the developing world.

Poor countries could grow more potatoes, they say, to supplement or even replace grains that are most often shipped in from far away and are subject to severe market gyrations…

A decade ago, the vast majority of potatoes were grown and eaten in the developed world, mostly in Europe and the Americas. Today, China and India – neither big potato-eating countries in the past – rank first and third, respectively, in global potato production. And in 2005, developing countries produced a majority of the world’s potatoes for the first time.

“Increasingly, the potato is being seen as a vital food-security crop and a substitute for costly grain imports,” said NeBambi Lutaladio, a roots and tubers specialist at the UN Food and Agriculture Organization in Rome. “Potato consumption is expanding strongly in developing countries, where the potato is an increasingly important source of food, employment and income.”

Well, there’s an advantage and a disadvantage – which can be turned to advantage.

They are cheap and easy to grow. I have kin who make roughly half their annual income from potatoes. For six generations or so, here in the New World.

Global warming ain’t going to help storage and related problems since spuds don’t do as well in warmer climates. But, that’s all the more reason to support emphasis on local sourcing for produce. If you’re not shipping them off for a 5,000-mile boat ride, shelf life becomes less of a problem.