I surprised we haven’t printed “Thoughts & Prayers” on the dollar bill. Yet.

Hundreds of people gathered outside a mosque in Wellington, New Zealand, and locked arms to form a human chain, in a symbolic act of protection of the Muslim community during Friday prayer.

The move came as New Zealanders mourn the 50 victims of mass shootings at two Christchurch mosques on March 15, in a national day of reflection to mark a week since the terror attack.

Christchurch newspaper The Press had the word ‘salam’ (peace) in Arabic script in its front page, along with the names of the victims of the attack…

“The atmosphere was sad, quiet, but determined. Many women wore headscarves,” Sue Teodoro, who was at the vigil, told CNN. “Many people cried openly. It was incredibly moving. People were determined that the community should pray without fear today.”

A loving example of a nation without fear, absent the reactionary power of a gun lobby owning the majority power of their government. Unarmed, standing up to defend a part of their community under attack by fools and fascist bigots. 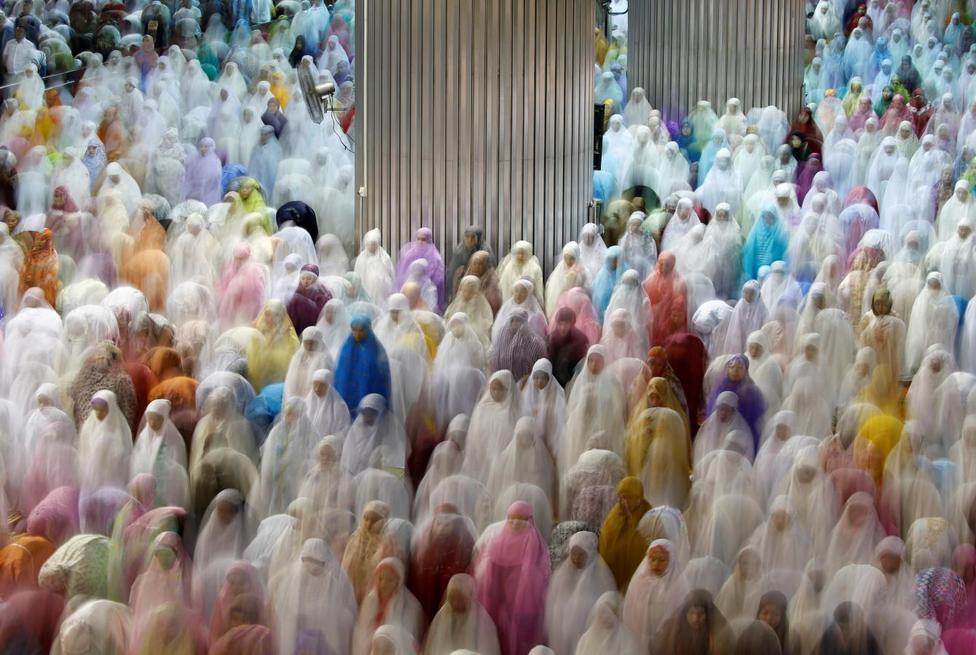 Indonesia’s highest Islamic body has been forced to apologise to the country’s Muslims after admitting they have been praying towards Kenya rather than Mecca.

Officials in the world’s most populous Muslim country admitted on Monday that they made a mistake when issuing an edict in March saying the holy city in Saudi Arabia was to the country’s west.

The Indonesian Ulema Council, or MUI, has since asked followers to shift direction slightly northward during their daily prayers.

“After a thorough study with some cosmography and astronomy experts, we learned they’ve been facing southern Somalia and Kenya,” said Ma’ruf Amin, a prominent cleric of the MUI.

“We’ve revised it now to the north-west.”

He said Indonesians need not worry, however.

True Believers stand always ready to believe the latest correction of their previously infallible belief – now proven incorrect. It’s part of running your life based on faith instead of reality.

Keep this up and they’re liable to end up cracking their eggs on the big end.

A group of rabbis and Jewish mystics have taken to the skies over Israel, praying and blowing ceremonial horns in a plane to ward off swine flu.

About 50 religious leaders circled over the country on Monday, chanting prayers and blowing horns, called shofars. The flight’s aim was “to stop the pandemic so people will stop dying from it”, Rabbi Yitzhak Batzri was quoted as saying in Yedioth Ahronoth newspaper.

The flu is often called simply “H1N1” in Israel, as pigs are seen as unclean.

So they can’t say the fracking word, “swine”.

According to Israel’s health ministry, there have been more than 2,000 cases of swine flu in the country, with five fatalities so far.

“We are certain that, thanks to the prayer, the danger is already behind us,” Mr Batzri was quoted as saying.

Next time, spend the cost of the fun air trip on providing medical care for the sick. It will do a lot more good.

The Vatican is endorsing new technology that brings the book of daily prayers used by priests straight onto iPhones.

The application includes the Breviary prayer book – in Italian, English, Spanish, French and Latin and, in the near future, Portuguese and German. Another section includes the prayers of the daily Mass, and a third contains various other prayers.

Monsignor Paul Tighe, secretary of the Vatican’s Pontifical Council for Social Communications, praised the new application Monday, saying the church “is learning to use the new technologies primarily as a tool or as a means of evangelizing, as a way of being able to share its own message with the world.”

Perhaps they might even consider dragging their politics and ideology into the 21st Century, as well.

Two schoolboys were allegedly disciplined after refusing to kneel down and “pray to Allah” during a religious education lesson.

It was claimed that the boys, from a year seven class of 11 and 12-year-olds, were given detention after refusing to take part in a practical demonstration of how Allah is worshipped.

Yesterday parents accused the school of breaching their human rights by forcing them to take part in the exercise.

One, Sharon Luinen, said: “This isn’t right, it’s taking things too far. I understand that they have to learn about other religions. I can live with that but it is taking it a step too far to be punished because they wouldn’t join in Muslim prayer.

“Making them pray to Allah, who isn’t who they worship, is wrong and what got me is that they were told they were being disrespectful.”

There are significant, simple differences between understanding diverse cultures and requiring young minds to practice all the silly devices human beings get up to in the name of religion. Sounds like the school cares more for indoctrination rather than building understanding.