In August of 1619, a ship appeared on this horizon, near Point Comfort, a coastal port in the English colony of Virginia. It carried more than 20 enslaved Africans, who were sold to the colonists. No aspect of the country that would be formed here has been untouched by the years of slavery that followed. On the 400th anniversary of this fateful moment, it is finally time to tell our story truthfully.

Here’s the link. Forgive me, but, I don’t presume that very many Americans have ever read – or studied – this tale and its effects down to this day. ❝ Donald Trump has said and done a lot of outlandish things while running to be president of the United States, but perhaps none as dangerous as this. “I’m afraid the election is going to be rigged, I have to be honest,” the Republican nominee told supporters at a Monday rally in Columbus, Ohio. Appearing on Fox News later that night, Trump elaborated in his usual evidence-free way…

❝ Trump, of course, is no stranger to making fact-free assertions and spreading conspiracy theories for his own political and personal benefit. He laid the groundwork for his current presidential campaign by beating the Birther drum for years, and more recently hinted that President Obama was an ISIS sympathizer and suggested that Ted Cruz’s father was somehow involved in the assassination of JFK. Spreading those falsehoods — as well as a whole host of others about Hispanics, blacks, and Muslims — has done an unquantifiable amount of damage to the nation’s political discourse. His suggestion that the 2016 election will be illegitimate, though, could do damage to the republic itself.

❝ Trump’s latest allegation is, in the words of the usually staid Associated Press, an “unprecedented assertion by a modern presidential candidate,” one that could “threaten the tradition of peacefully contested elections and challenge the very essence of a fair democratic process.” Trump has laid the groundwork for only two possible outcomes in the eyes of his most passionate supporters: He wins the presidency, or he has it stolen from him…

❝ This is not the first time Team Trump has suggested that violence would occur if a “rigged” system prevented their man from getting his way…At this point it should be clear these are not off-hand comments; this is a political strategy.

The worst, though, doesn’t need to happen for Trump’s “rigged” narrative to do lasting damage to American democracy. Even if we set aside the prospect of widespread violence from his supporters, Trump’s comments risk delegitimizing a Clinton victory — and as result, an ensuing Clinton presidency — in the eyes of many Americans…Until now, the greatest dangers posed by Trump were predicated on him winning this November. Now he’s dangerous even if he loses.

True Believers cannot accept rejection. No matter how outlandish, unfounded, demented and bigoted their ideology, the demagogue and his loyal-to-the-death followers must find a conspiracy as root to their defeat.

Last night, I watched a moment with a journalist interviewing a Trumpkin at some rally or other. Asked if there was anything that might turn him away from voting for Trump, his reply was, “I suppose I’d have to reconsider if he murdered someone.”

Then he added, “It would depend, of course, on who he murdered.” 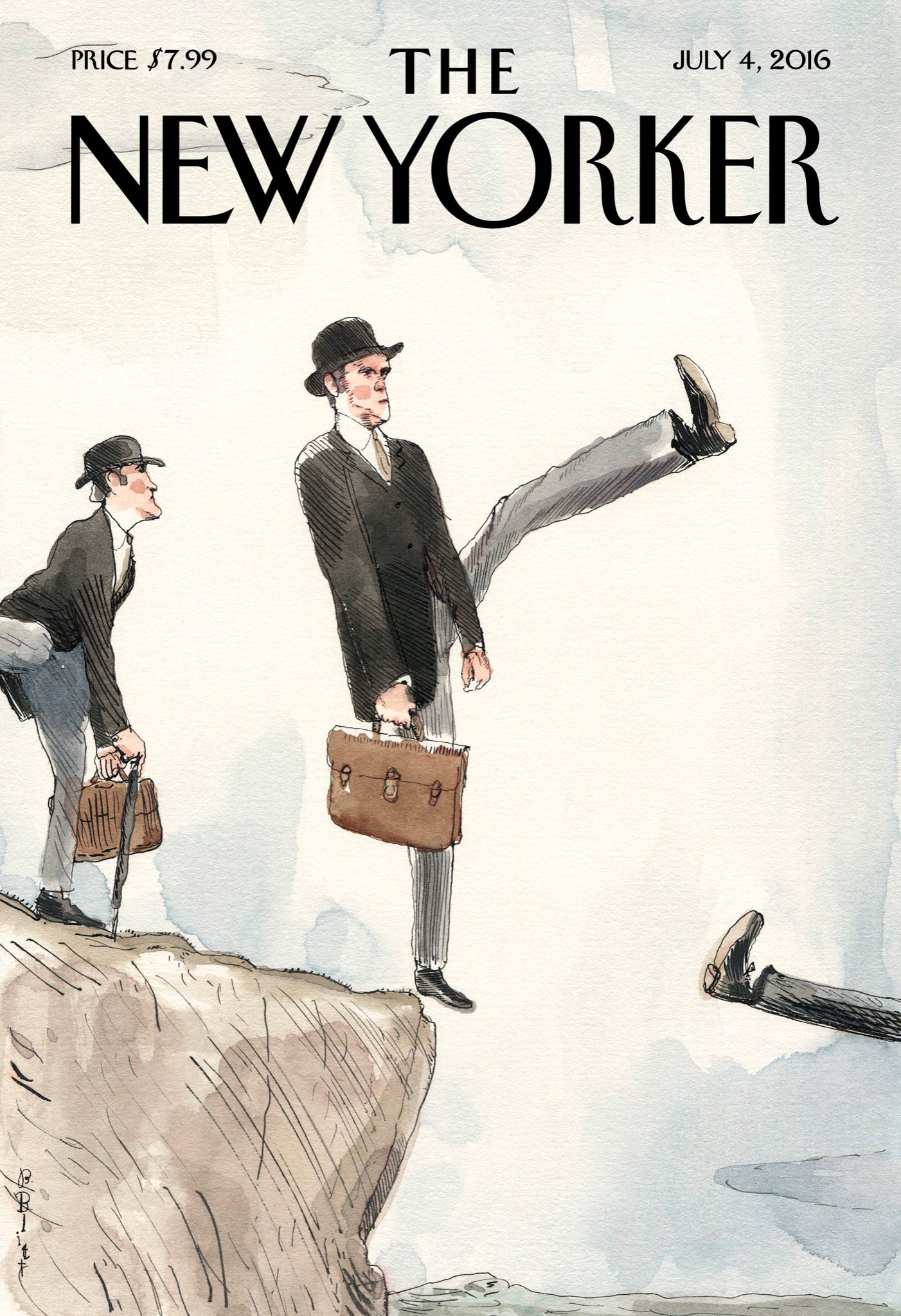 Across the United Kingdom on Friday, Britons mourned their long-cherished right to claim that Americans were significantly dumber than they are.

Luxuriating in the superiority of their intellect over Americans’ has long been a favorite pastime in Britain, surpassing in popularity such games as cricket, darts, and snooker.

But, according to Alistair Dorrinson, a pub owner in North London, British voters have done irreparable damage to the “most enjoyable sport this nation has ever known: namely, treating Americans like idiots.”…

In the face of this startling display of national idiocy, Dorrinson still mustered some of the resilience for which the British people are known. “This is a dark day,” he said. “But I hold out hope that, come November, Americans could become dumber than us once more.”

Between TV Talking Heads too lazy to try their own hand at journalism and white Americans who claim that behaving like racists doesn’t make them racist – I agree. You’ll rarely go broke betting against American ignorance.

A man who provided sperm to a lesbian couple in response to an online ad is the father of a child born to one of the women and must pay child support, a Kansas judge ruled Wednesday.

Topeka resident William Marotta had argued that he had waived his parental rights and didn’t intend to be a father. Shawnee County District Court Judge Mary Mattivi rejected that claim, saying the parties didn’t involve a licensed physician in the artificial insemination process and thus Marotta didn’t qualify as a sperm donor…

Anyone think the parents being a same-sex couple had nothing to do with the judge’s decision?

The Kansas Department for Children and Families filed the case in October 2012 seeking to have Marotta declared the father of a child born to Jennifer Schreiner in 2009. The state was seeking to have Marotta declared the child’s father so he can be held responsible for about $6,000 in public assistance the state provided, as well as future child support.

Marotta opposed that action, saying he had contacted Schreiner and her partner at the time, Angela Bauer, in response to an ad they placed on Craigslist seeking a sperm donor. He said he signed a contract waiving his parental rights and responsibilities…

“We stand by that contract,” Marotta’s attorney Benoit Swinnen said. “The insinuation is offensive, and we are responding vigorously to that. We stand by our story. There was no personal relationship whatsoever between my client and the mother, or the partner of the mother, or the child…”

The state of Kansas and what passes for a welfare department have found themselves a piece of Kansas legislation to use as a copout on providing care and concern they normally would provide to families that fit their biblical definition of marriage. That’s why they’re using it. That’s why a judge provides her own expert sophistry.

Be careful driving out of state when you’re heading home. You might fall off the edge of the Earth.

As we’ve gotten around to casting votes to select a Republican presidential nominee, the antiblack rhetoric has taken center stage. You just have to love (and despise) this kind of predictability.

On Sunday, Rick “The Rooster” Santorum, campaigning in Iowa, said what sounded like “I don’t want to make black people’s lives better by giving them somebody else’s money. I want to give them the opportunity to go out and earn the money.” At first, he offered a nondenial that suggested that the comment might have been out of context. Now he’s saying that he didn’t say “black people” at all but that he “started to say a word” and then “sort of mumbled it and changed my thought.”

Newton Leroy Gingrich has been calling President Obama “the best food stamp president” for months, but after plummeting in the polls and finishing fourth in Iowa, he must have decided that this approach was too subtle. So, on Thursday in New Hampshire, he sharpened the shiv and dug it in deeper, saying, “I’m prepared, if the N.A.A.C.P. invites me, I’ll go to their convention and talk about why the African-American community should demand paychecks and not be satisfied with food stamps.” On Friday, Gingrich defended himself, as usual, by insisting that exactly what he said wasn’t exactly what he said. He was advocating for African-Americans, not disparaging them.

END_OF_DOCUMENT_TOKEN_TO_BE_REPLACED

A mortally wounded man’s identification of his assailant may be repeated by police officers in court, the Supreme Court ruled on Monday. The 6-to-2 decision was a significant retreat from the court’s recent embrace of the Sixth Amendment’s Confrontation Clause, which guarantees criminal defendants the right to confront witnesses against them.

Justice Antonin Scalia had been the leading proponent of a robust interpretation of the Confrontation Clause, and Monday’s decision drew a slashing dissent from him. He called the majority’s account of the facts of the case “so transparently false that professing to believe it demeans this institution…”

Justice Sotomayor, responding to criticism from Justice Scalia, acknowledged that determining whether the primary purpose of a crime victim’s statement was to provide information about past events or to aid in addressing a current emergency requires “a highly context-dependent inquiry…”

Justice Scalia’s dissent was comprehensively critical of the majority’s approach. He said it represented a significant shift away from the court’s 2004 ruling in Crawford v. Washington, which had breathed new life into the Confrontation Clause…

Justice Scalia added that the majority had smuggled back into the law a factor that the Crawford decision had rejected — whether the out-of-court statements were “reliable.”

“Dispensing with confrontation because testimony is obviously reliable is akin to dispensing with jury trial because a defendant is obviously guilty,” Justice Scalia wrote for the majority in Crawford. “This is not what the Sixth Amendment prescribes.”

An essentially Republican court renders an essentially conservative opinion. One that reeks of frontier justice and the laws of Judge Lynch.

With no right to confront and question a witness defendants lose a basic constitutional right.