The adage ‘war is long periods of boredom punctuated by moments of sheer terror’, is said to date from the First World War and its trench warfare. 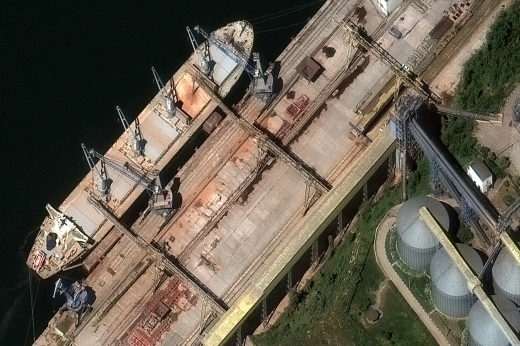 Russia has bombed, blockaded and plundered the grain production capacity of Ukraine, which accounts for one-tenth of global wheat exports, resulting in dire forecasts of increased hunger and of spiking food prices around the world.

Now, the United States has warned that the Kremlin is trying to profit from that plunder by selling stolen wheat to drought-stricken countries in Africa, some facing possible famine…

The American alert about the grain has only sharpened the dilemma for African countries, many already feeling trapped between East and West, as they potentially face a hard choice between, on one hand, benefiting from possible war crimes and displeasing a powerful Western ally, and on the other, refusing cheap food at a time when wheat prices are soaring and hundreds of thousands of people are starving.

Rock and a hard place come to mind. Especially when feelings in Africa about any warnings coming from two-faced American politicians aren’t exactly welcome…or considered believable.

When the Russian warship Moskva told the Ukrainian border guards on Snake Island to surrender, the soldiers told the ship to go fuck itself. Two months later, the border guards are still alive, the Moskva is at the bottom of the Black Sea, and the moment of resistance has been turned into a painting that has become a popular meme. It’s even become a stamp that’s selling for outrageous prices on secondary markets like eBay.

“Russian warship, go fuck yourself,” turned into a popular phrase moments after the Ukrainian Roman Hrybov transmitted it to the Moskva. On March 1, the Ukrainian postal service announced a competition to design a stamp based on the phrase. Boris Groh’s painting of a Ukrainian soldier flipping the bird to a distant Moskva won after being put to a vote on Instagram and Facebook.

The Ukrainian post office turned the painting into a stamp and issued the first run of them on April 13. The next day, the Moskva sank after being struck by a Neptune anti-ship missile fired by Ukraine.

The stamp is now a collector’s item.

Culture wars are a helluva lot more fun than the ones using weapons of mass destruction.

Let’s step back for a moment from the awful human tragedy in Ukraine as the Russian army targets civilians. There is an even bigger issue here. And until we come up with an answer it’s going to continue to plague the world…

The bigger issue is that there is no way to stop a nuclear power from invading a non-nuclear power, as America did 18 years ago this month when it took down the dictatorship in Iraq…

Three years ago I spent a week in Ukraine. Every person to whom I spoke, whether in a formal interview or casual conversation, said that Putin was going to invade their country.

Many of them expected an invasion while Donald Trump was in office. That made sense because Trump repeatedly declared his trust in and fealty to Putin…

Putin, whose words I have carefully read for two decades, doesn’t plan to stop with Ukraine. He has called the collapse of the old Soviet Union the worst geopolitical disaster of the 20th century and has said he is determined to put it back together. His words:

“Above all, we should acknowledge that the collapse of the Soviet Union was a major geopolitical disaster of the century. As for the Russian nation, it became a genuine drama. Tens of millions of our co-citizens and co-patriots found themselves outside Russian territory.

“Moreover, the epidemic of disintegration infected Russia itself.”

David Cay Johnston ain’t a beginner. He makes important points without trying to be a nice guy-nebbish. His sources are accurate, relevant, timely. As is this article, I believe. Unfortunately. 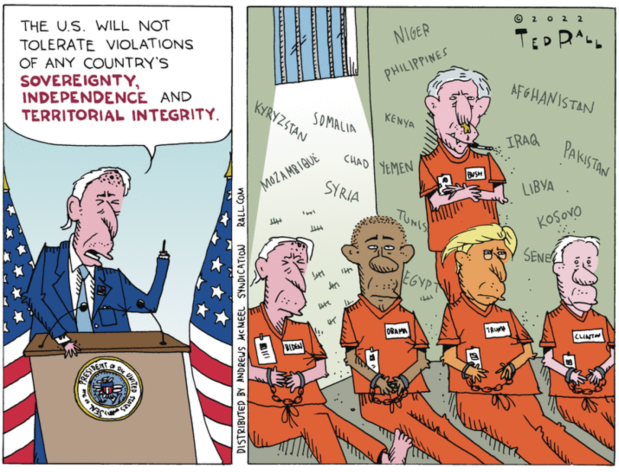 I’ve spent most years of my life marching on the streets of protest against injustice. Opposing racism, sexism, class exploitation…opposing imperial nations; but, circumstances pretty much guaranteed most of the time I had to deal with the GOUSA. Our press, our politicians, rarely speak out unless the guilty party is a furriner. Even among the cartoonists whose commentary I post here daily, only Ted Rail has stood up straight and strong.

If the crocodile tears for Ukraine were to wash away the names of all those nations on the cell wall, I need only write one to remind my peers of our history: VIETNAM.

A Russian photographer has captured a fascinating series of photos showing polar bears that have taken over the abandoned buildings of a meteorological station on an island between Russia and Alaska.

In September 2021, photographer Dmitry Kokh traveled through islands in the Chukchi Sea, a marginal sea of the Arctic Ocean that sits between Russia and Alaska…

Kokh was on a personal mission to photograph polar bears, and his expedition originally focused on Wrangel Island, which is world-famous for being a place to encounter the bears. In 2021, however, possibly due to the very cold summer, the island was devoid of its typical polar bear population.

“But nature always sending you something when you least expect it — when we passed through the Kolyuchin Island near the Northern coast of Chukotka, we saw some movements in the windows of the abandoned windows there,” Kokh says. “And when we got close — those were bears!”

” Facebook has taken down a well-financed campaign that used dozens of artificially generated faces to spread pro-Trump and anti-Chinese government messages, the company and outside researchers said on Friday.

Researchers from New York-based Graphika and the Digitial Forensics Research Lab, an arm of the Washington-based Atlantic Council, said it was the first time they had seen the large-scale use of computer-generated faces to spread disinformation on social media…

” Facebook said 610 Facebook accounts, 89 Pages, 156 Groups and 72 Instagram accounts were involved in the network. The social media giant said those behind the operation had spent upward of $9 million on advertising to promote their content, which touched on hot-button issues such as “impeachment, conservative ideology, political candidates, elections, trade, family values and freedom of religion…”

Facebook said its investigation linked the activity to U.S.-based Epoch Media Group and individuals in Vietnam working on its behalf, though the accounts more openly associated with The BL, for the Beauty of Life…

” The Epoch Times was set up as a print publication by followers of the Falun Gong spiritual movement, banned in China, before moving heavily online. Its output has tended to steer toward support for Trump and attacks on his opponents.

The content removed by Facebook had the same tilt. Groups identified by the outside researchers bore names such as “America Needs President Trump,” “TRUMP MAGA 2020,” or “WE STAND WITH TRUMP & PENCE!”

The beagle patrolling Toronto Pearson International Airport was prowling for the subtle scents of contraband when an unexpected odor tickled its olfactory receptors. The source was the luggage of a Canadian man who had just returned from Russia.

The dog knew what to do next and plonked down next to the traveler—sending a signal to Canada Border Services Agency personnel that something was amiss.

The incident, revealed here for the first time, is not yet part of the public record. The man was charged with illegally importing an internationally regulated species without the required permits, says André Lupert, manager of intelligence for the Wildlife Enforcement Directorate at Environment and Climate Change Canada…the man is awaiting a court hearing next month in the greater Toronto area. To protect his privacy and because the investigation is ongoing, the Canada Border Services Agency said they can’t share his name or other details of the incident—including the dog’s name or even the dog’s sex.

He has an excuse. He says he wasn’t trying to hide the fact he had a suitcase full of leeches. They are the sort of leeches used [rarely] for medical purposes; but, those are regulated and typically require an import permit.