More than 130 Secret Service officers who help protect the White House and the president when he travels have recently been ordered to isolate or quarantine because they tested positive for the coronavirus or had close contact with infected co-workers, according to three people familiar with agency staffing.

The spread of the coronavirus — which has sidelined roughly 10 percent of the agency’s core security team — is believed to be partly linked to campaign rallies that President Trump held in the weeks before the Nov. 3 election, according to the people, who, like others interviewed for this report, spoke on the condition of anonymity to describe the situation.

In all, roughly 300 Secret Service officers and agents have had to isolate or quarantine since March because they were infected or exposed to infected colleagues, according to two people with knowledge of the figures.

❝ The product is carefully created in rural facilities throughout the Peruvian countryside using cheap labor, then hoarded in stash houses controlled by violent gangs in Lima.

Once there, the goods are packed into parcels, loaded onto planes or hidden inside luggage, pottery, hollowed-out Bibles, sneakers, children’s toys or massive shipping containers bound for major U.S. ports of entry, such as Miami.

The product’s ultimate destination, according to the U.S. Secret Service, is generally New York, New Jersey, Boston and the greater Northeast.

It’s an illicit trade that bears an uncanny resemblance to narcotrafficking, and while there is some overlap between the two activities, this “product” has nothing to do with cocaine.

❝ But the profits created by smuggling the counterfeit currency known as the “Peruvian note” — generally considered the finest fake money on the planet — are just as staggering, if not more so, according to the Secret Service. Responsible for producing and distributing an estimated 60 percent of the world’s counterfeit U.S. notes, more fake American money comes from Peru than any other country, according to the Secret Service, which has been combating the currency’s rise since 2003…

❝ Once inside the United States, the currency might be used in low-level street crime, for Craigslist purchases, or in larger schemes that target big-box retailers.

The ruse ends at the bank, noted Don Brewer, the former Secret Service agent. He said banks rely on counting machines that can immediately separate fake bills from authentic ones by analyzing magnetic ink on legitimate currency.

By that time, however, the damage — to small businesses in particular — is already done.

RTFA. Entertaining — that is, as entertaining as crime can be. The generational skills used in Peru are an interesting counterpoint to our domestic flavor of techie counterfeiter whose skills are “good enough”. 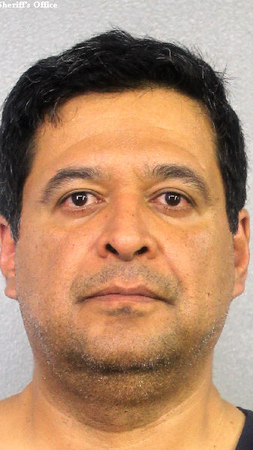 ❝ There were plenty of clues that a billion-dollar U.S. bearer bond that a man tried to cash in Fort Lauderdale was just too good to be true…

The bond, supposedly issued in 1934, appears to have been printed on an inkjet printer and seemed to contain a security thread – both technologies that did not exist until many years later, investigators said. The counterfeit bond also featured a photograph of Grover Cleveland, who was president in the 1880s and 1890s.

But perhaps the biggest clue was the eye-popping billion-dollar figure on the face of the bond. U.S. Secret Service Agent Charles Callahan told a judge Wednesday in federal court in Fort Lauderdale that the highest-valued bearer bond in that era was $10,000 and the highest-valued bond ever was a $1 million one issued in 1978.

❝ Hugo Barrios Briceno, the 50-year-old Venezuelan man accused of trying to cash the counterfeit bond at a Fort Lauderdale financial business earlier this month, will remain locked up because he is a potential flight risk, U.S. Magistrate Judge Patrick Hunt ruled Wednesday…

The judge asked to see the document during the court hearing, joking: “Believe it or not, I’ve never seen a billion-dollar bond before.”

❝ Prosecutors said that the bond would have an equivalent value of 19 billion dollars in today’s currency. They also said that a simple Google search would have shown Barrios Briceno that billion-dollar bonds are not legitimate.

❝ The judge said the evidence presented so far was sufficient but not “overwhelming,” adding that he thinks the outcome of the prosecution will hinge on precisely what Barrios Briceno said during an audio-and-video-recorded meeting with undercover Secret Service agents in Fort Lauderdale.

Hey, maybe he was hustled by some dude who used it for loan collateral back in South America. Or maybe he’s a con man who didn’t do his homework.

Anything else you think I should ignore – besides the NSA?

The chairman of the House Oversight Committee called…for the head of the Drug Enforcement Administration to step down amid allegations that DEA agents attended sex parties with prostitutes while stationed overseas.

Republican Rep. Jason Chaffetz of Utah said DEA chief Michele Leonhart has allowed problems at the agency to fester for more than a decade…

If Leonhart does not step down, President Barack Obama should fire her, Chaffetz said.

Chaffetz made the comments after a 3½-hour hearing Tuesday that focused on the sex party allegations, which date back to 2001. Leonhart has led the DEA since 2007 and was sole deputy administrator for three years before that.

An internal report said government money was used to pay prostitutes at a farewell party for a high-ranking DEA official in Colombia.

DEA agents also rented undercover apartments in Colombia and used them for parties with prostitutes, the DEA said in an internal report…

The Justice Department report recounts allegations that DEA agents attended sex parties with prostitutes, funded by local drug cartels, in a foreign county. The report does not identify the country where the alleged sex parties occurred, but the DEA report released Tuesday identified it as Colombia.

The report came after a separate 2012 prostitution scandal in Colombia involving the Secret Service drew attention to questionable behavior by law enforcement officers while stationed overseas. Those allegations prompted Congress to order a review of other agencies’ practices. DEA agents who were accused of misconduct in the wake of that scandal were recalled from Colombia and put on limited duty.

Ten DEA agents were accused of wrongdoing; seven were issued suspensions ranging from one to 10 days…

My only suggestion – in addition to endorsing the firing of the DEA Chief who did nothing – is to bring the former DEA head(s) back to Congress for questioning about the how and why of starting this criminal behavior. Then, sue them for the return of their paychecks.

Somehow – in 2001 – it became clear to agents of a number of police operating for the United States outside our borders that accepting gifts and prostitutes from drug gangs was acceptable. That’s not an easy decision even under Emperor Nero or Reichsführer Cheney, I imagine.

“I need to whisper a secret in your ear”

Luxembourg’s Prime Minister Jean-Claude Juncker has resigned after being forced out of power by his coalition partner for failing to curb the excesses of the secret services.

Jean-Claude Juncker, prime minister since 1995 and the European Union’s longest serving government chief, tendered his resignation on Thursday to Grand Duke Henri, the royal head of state who himself has been implicated in media reports of espionage…

He announced his decision after a charged seven-hour debate, prompted by a motion from junior coalition partners, the Socialists, calling for the dissolution of parliament and elections.

A parliamentary report found that the country’s intelligence agency had, among other offences committed from 2003 to 2009, illegally bugged politicians’ phones, sought payments for access to officials and bought luxury cars for private use.

The report criticised Juncker for having little control over the agency, known as SREL, despite being the minister with overall responsibility for it…

Some opponents accused the 58-year-old of abusing the secret service for his own and his party’s benefit, but he angrily denied that during the parliamentary debate…

Socialist leader, Alex Bodry, said that the prime minister “must assume his responsibilities, not because he was dishonest or incompetent but because he made the wrong choices.”

So, the other side of the pond we see a nation’s leader caught spying on citizens of the nation itself. Not only his political opposition; but, his party’s partners rise up in anger over a betrayal of privacy and purpose by the government. He is forced to resign.

This side of the Atlantic? Americans accept political corruption as natural and inevitable. And lack the backbone to demand allegiance to the principles of our constitution. Do you think we can rely on Congress to sort out the NSA – and our president?

Federal prosecutors filed criminal charges on Thursday against a Mississippi man, who worked as an Elvis impersonator, for threatening to harm President Barack Obama by sending him a letter that initially tested positive for the deadly poison ricin.

The FBI confirmed the presence of ricin in the letters to Obama and Wicker, but said it is “not aware of any illness as a result of exposure to these letters…”

Wearing handcuffs and leg shackles, Curtis appeared in court in Oxford, Mississippi. Local media reported that he made no comments except to say “yes ma’am” when the judge asked if he understood what was happening. His lawyer told reporters outside the court that Curtis was not guilty…

Apparently, the President never hired Elvis impersonators – for any reason.

U.S. Secret Service investigative and personnel information was left on a Washington subway train in 2008 and is still missing…

Citing law enforcement and congressional sources, CNN reported Friday an unidentified contractor working for the agency left a pouch containing two computer backup tapes bearing the sensitive data on a train in Washington’s Metrorail subway system in February 2008. One source said the tapes have yet to be recovered despite a thorough search…

“Some of the information could cause lives to be at risk, if someone wanted to get at the families of a high-level government worker or someone they perceived as being someone who could work against, say, a terrorist cell,” said Eric O’Neill, a former FBI counterespionage agent.

The Secret Service, in a statement acknowledging the loss of the pouch, disagreed.

“These back-up tapes were not marked or identified in any way and were protected by multiple layers of security,” it said. “They could not be accessed without the proper equipment, applications and encoding…”

O’Neill, now a partner at the security firm The Georgetown Group, said even if encrypted, with new technology developed in the past five years, the tapes “could be cracked in moments.”

Kind of makes you feel all warm and secure inside, right? The folks protecting us against terrorist plots manage to leave other stuff they’re protecting on a subway train. Can’t find it or get it back for 4 years – and finally decided to let other folks know about it.