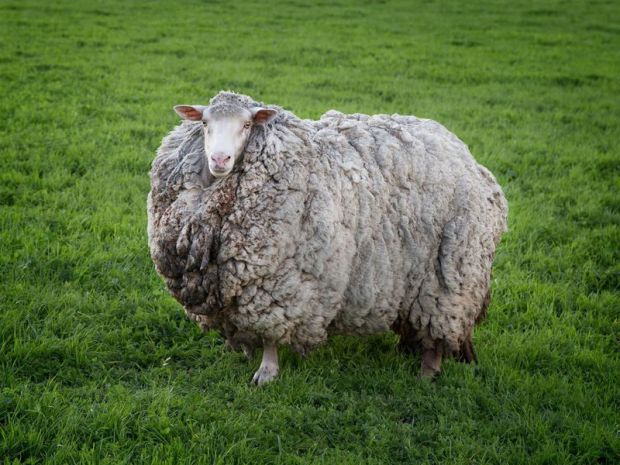 When a devastating spate of bushfires hit the Australian island state of Tasmania in 2013, locals like Alice Gray found themselves caught completely off guard. The flames, which burned through some 50,000 acres statewide, destroyed much of the Gray family’s farm, consuming miles of fencing that ran along its border.

In the chaos, several livestock animals living on the farm fled for their lives—including a sheep, now known as Prickles, who was then little more than a tiny lamb. Seven years later, she has wandered back into the Grays’ lives, swaddled in a gloriously rotund wool coat after nearly a decade unshorn…

With thousands of sheep under their care, the Grays didn’t initially notice Prickles’ absence. But years after the fire, Gray’s father-in-law spotted something unusual in footage captured by a night vision camera installed on the property: a “great white, fluffy thing” that hobbled up to the lens and peered down into it…

The family had been looking for a change of scenery during self-isolation and were in the middle of a sausage cookout on the property’s back paddock when they spied “this big round thing,” according to Gray, who recalls thinking, “Oh my God, I think that is that crazy sheep we saw in the video.”

…The Grays have scheduled her shearing for May 1 and are currently holding a fundraising contest to benefit the United Nations High Commissioner for Refugees, bringing aid to refugees affected by COVID-19.

RTFA. Heartwarming, woolly tale about nice folks and a silly sheep caught on the wrong side of the fence they rebuilt after a bushfire. 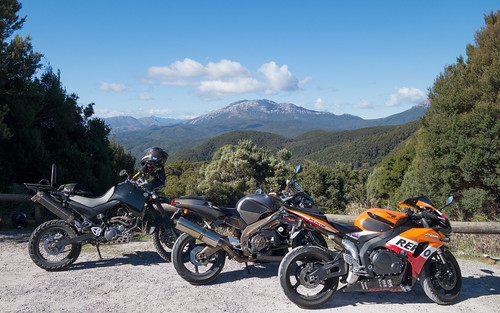 One of our readers, contributor and stellar mate on a road trip in Tasmania. 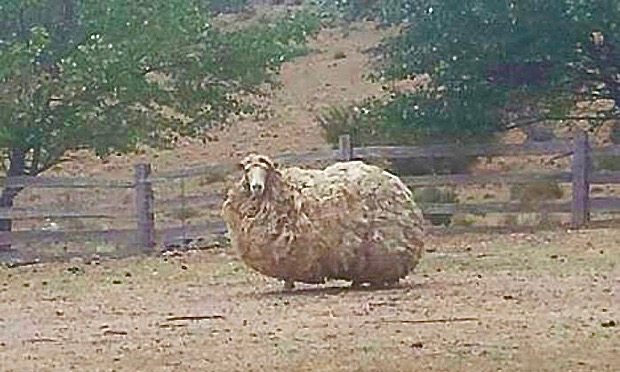 A Tasmanian sheep farmer has rescued a very woolly beast, estimated to be carrying about 30kg of wool, that had been trapped by the roadside.

Derek Turvey, a Buckland farmer, received a call from a neighbour last Saturday to tell him a passerby had found the sheep stuck in a culvert.

The locals had seen the runaway sheep,carrying a substantial amount of wool on its back, over the past two months in a eucalypt plantation.

“We knew it was there somewhere but we just couldn’t find it in the plantation,” Turvey told Guardian Australia…

Turvey, who runs about 2,000 sheep on his property, thinks it might be one of his that wandered off a number of years ago. His farm borders the plantation in the bushland of south-eastern Tasmania and he says it is easy to lose track of the odd lost animal.

“There’s always a few that go missing and turn up later on, but this one was quite a bit later on,” he said.

“You’ve got to use a totally different technique to get the wool off them because the weight of the wool pulls the skin,” he said. “Instead of sitting it up and shearing it you have to lay it on the floor and gradually roll it over.”

He is hoping the end product might beat the Tasmanian record of 23.5kg – currently held by Shaun who was found in the midlands in 2014 – but it will not be worth much.

“It’s worth very little because the machine they use to process wool just isn’t designed for wool of that length,” he said…

Shaun hadn’t been shorn in six years and while the wool was not worth much at market, several offers in the thousands of dollars came in from overseas…

Still, might be carded and spun the old-fashioned way into some amazing yarn. And, eventually, sweaters. Lots of sweaters. 🙂

One of Australia’s largest supermarket chains has come under fire for an online job ad that specified that “no Indians or Asians” should apply…The ad, which sought cleaners at a Coles supermarket near the Tasmanian capital of Hobart, sparked condemnation after it was posted Sunday…

Coles said the offending ad was placed by a cleaning subcontractor without the company’s knowledge, in a written statement from spokesperson Jim Cooper.

“Coles is a proud, equal-opportunity employer and at no time have we ever issued the directives contained in this ad.”

The company said it was “extremely concerned to learn of the ad and its contents” and has terminated the subcontractor’s services as a result. It said it will also retrain its cleaning contractor on equal opportunity employment policies.

The ad has since been removed from the popular Gumtree classifieds website.

“I’m certainly going to look at commencing an investigation into what’s happening—the role of Gumtree, what Coles’ role was, and find out more details about the subcontractor,” said Tasmania’s Anti-Discrimination Commissioner Robin Banks…

In addition to media reports, Banks was alerted to the Coles ad through a post to her personal Facebook page. This showed that the community cares about fighting discrimination, she said.

Fast reaction time is half the battle against bigotry – if and when a government is serious.

A blood-swollen leech found at a crime scene eight years ago has led Australian police to an armed robber.

The leech dropped off Peter Cannon as he and an accomplice tied a 71-year-old woman to a chair in her remote home in the Tasmanian woods and stole several hundred dollars in cash in September 2001.

Officials extracted blood from the leech that they believed was likely to have come from one of the two suspects. They identified Cannon as that culprit when he was arrested last year on unrelated drug charges and authorities for the first time recorded his DNA profile.

Sally Kelty, a forensic science researcher, said the case could be the first in which investigators had used DNA extracted from a bloodsucker such as a leech or a mosquito to solve a crime…

Detective Inspector Mick Johnston, who was involved in the police investigation, said the leech was the only forensic evidence found at the crime scene. He said he was happy with the guilty plea, especially for the victim, Fay Olson.

“She’s waited a long time for closure to this matter and it’s nice to be able to deliver that,” Johnson told ABC radio.