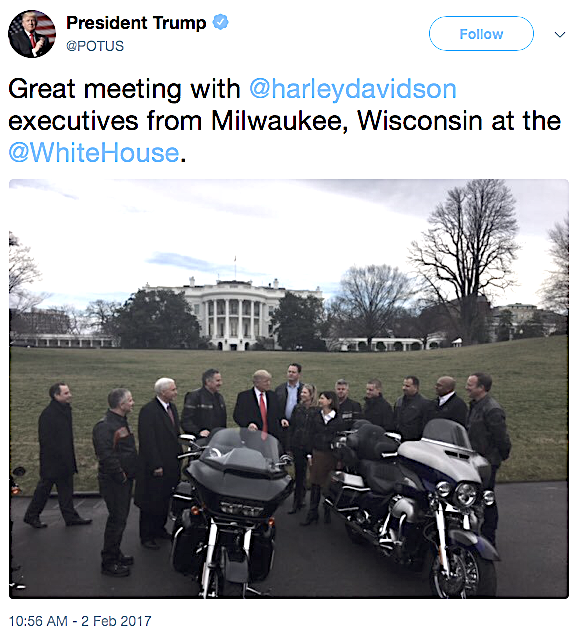 ❝ In early 2017, President Donald Trump met with executives from Harley-Davidson who he thanked for “building things in America”…

❝ Last week, the EU imposed retaliatory tariffs on US goods, including bourbon, orange juice and motorcycles. The measures are a response to new US duties on steel and aluminium imports…

❝ While Harley-Davidson had been struggling financially well before the EU’s retaliatory tariffs went into effect, the import duties of 25% certainly didn’t help matters.

❝ “To address the substantial cost of this tariff burden long-term, Harley-Davidson will be implementing a plan to shift production of motorcycles for EU destinations from the US to its international facilities to avoid the tariff burden…”

❝ The move is one of the most visible consequences of the trade disputes triggered by US President Donald Trump’s decision to levy tariffs on steel and aluminium imports.

Give our Fake President time. He’ll figure out how to make this even worse! 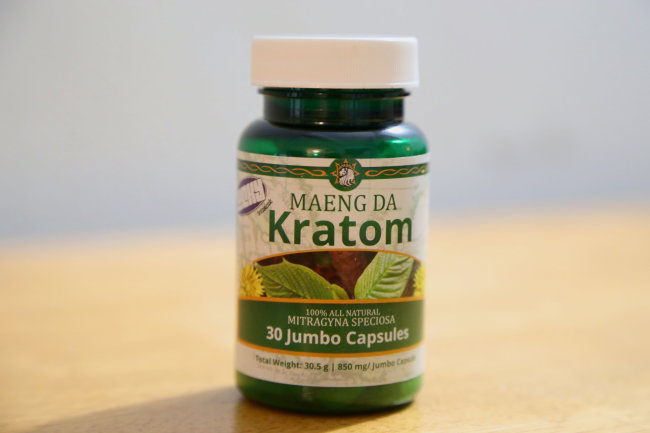 Toyota has been put on the spot by the U.S. government, which has asked the Japanese car maker to explain just how Islamic State has got hold of hundreds of its four-wheel-drive vehicles.

The Toyota Hilux pickup — a model similar to the Toyota Tacoma that’s sold in the U.S. — and Toyota Land Cruisers have become fixtures in the terror group’s propaganda videos…

“Regrettably, the Toyota Land Cruiser and Hilux have effectively become almost part of the ISIS brand,” said one former U.S. ambassador to the U.N., Mark Wallace….

Wallace is currently chief executive for the Counter Extremism Project, which aims to expose terrorists’ financial networks. “I don’t think Toyota’s trying to intentionally profit from it, but they are on notice now and they should do more,” Wallace added.

Questions about ISIS’s use of the vehicles have circulated for years, with the terror group believed to have repurposed older Toyota trucks as well as acquiring hundreds of new vehicles. In a recent ISIS parade, more than two-thirds of the vehicles were white Toyotas with black emblems, and there also were small numbers of other brands such as Mitsubishi, Hyundai and Isuzu…

Tracking who buys and sells used trucks and cars in the Middle East is a farce that could only be thought up by the American flavor of right-wing creep.

The fact is the Toyota HiLux is the most popular pickup truck in the world. Reliable and durable, they last for years. Most of what you see on the tube are diesel-powered, produced by Toyota in Thailand. Bought, stolen or volunteered to serve just about every insurgency and counter-insurgency. They satisfy the needs of most folks in the Middle East regardless of end use. Pretty much everyone in desert country buys white cars and trucks.

Once in a while you see a repainted Chevy – a present from American taxpayers to the Iraq Army – abandoned by soldiers running as fast as possible in the opposite direction from ISIS.

Ben Atreu Flegel, 25, a German survivor of the Asian tsunami who lost his grandparents ten years ago in this very beach, stands facing the sea in quiet reflection during a commemoration and religious ceremony for German, Austrian and Swiss victims of the tsunami, Friday, Dec. 26, 2014, in Khao Lak, Thailand. Dec. 26 marks the 10th anniversary of one of the deadliest natural disasters in world history: a tsunami, triggered by a massive earthquake off the Indonesian coast, that left more than 230,000 people dead in 14 countries and caused about $10 billion in damage.

We watched the tsunami coming from thousands of miles away.

Kinfolk were visiting for the holidays and one of them – a science teacher – had an app on his iPhone for global alerts of planet-affecting events. We knew of the tsunami alert before the poor buggers on the beaches of Thailand.

852 Thai students wearing black, green and red hoodies set a new Guinness World Record for forming the largest human Christmas tree in Bangkok, today. They got to keep the hoodies.

The oil spill from a leaked pipeline in Thailand has reached one of the country’s popular tourism islands, officials have said.

The authorities have warned tourists to avoid oil-slicked water on Koh Samet.

A pipeline operated by PTT Global Chemical leaked on Saturday spilling an estimated 50,000 litres of oil.

Hundreds of people, including navy personnel, environment officials and villagers were battling to clean the oil from Samet’s beaches.

“The top priorities right now are to get rid of the oil on the sand and the seawaters, and to make sure the spill doesn’t spread to other shores,” said local deputy provincial governor Supeepat Chongpanish.

“This is a very beautiful, white, sandy beach, so we want to make the spill go away as soon as possible.”

Some hotel guests were cutting their holiday short because of the oil spill.

“…It’s chaotic right now. Many people and officials are on the beach dealing with it,” a hotel worker told AFP news agency.

Not so pretty for a spell. I don’t know anyone this side of Royal Dutch Shell who thinks the sight of oil on the water makes any place more attractive to tourists. Or to the folks who live there.

Thailand is not an easy country in which to be vegetarian. But once a year the country’s avid meat eaters lay down their spicy meat stir-fries in favour of vegetables and meat substitutes.

Every year during the ninth Chinese lunar month, the country’s Thai-Chinese community…observe ten days of abstinence.

Eating meat, having sex, drinking alcohol and other habits thought to be vices and pollutants of the body and mind are cut out entirely by the truly devoted, who also wear only white. The belief is that nine gods come down from heaven to inspect the earth and record the good and bad deeds people commit…

The festival in Phuket starts out sounding just as tame.. Although meat is not on the menu, the rituals involved in the event are unusually bloody. During the celebrations, many of the devotees go into trances and have the flesh of their mouths pierced…all in the name of ritual purification.

WARNING: Click on photo for unpleasant image from arrest scene

A British man has been arrested in Thailand after being found with six foetuses that had been roasted and covered in gold leaf as part of a black magic spirit ritual.

The corpses of the unborn baby boys were found packed in a suitcase in his hotel room in Bangkok’s Chinatown district.

Chow Hok Kuen, 28, who holds a British passport but is of Taiwanese origin, confessed to police that he had bought the foetuses several days earlier for almost £4,000. The source of the foetuses is unclear.

He said he intended to smuggle them to Taiwan where they would be sold for as much as six times what he paid on the internet to people who believe that their possession would bring wealth and good luck.

The man told police that that he was hired by another Taiwanese man, named Kun Yichen, who regularly travelled to Thailand to collect the ritualistic foetuses. Worship of the foetuses — observed by some on the Chinese community — is a Buddhist-animist practice known as Kuman Thong that is described in ancient Thai manuscripts…

Lore has it that if the owner reveres the ritual foetus, its spirit will warn and protect its possessor of danger. In practice the foetuses have been replaced by wooden effigies…

Officers made the gruesome discovery in the hotel in the Yaowarat district of Bangkok, where they found that the foetuses had also been tattooed and were adorned with religious threads.

You have to love transubstantiation.

After floodwaters receded at the Honda factory in Ayutthaya province

In an effort to prove that no flood damaged vehicles will be sold to customers, the Honda factory in Thailand’s Ayutthaya province began destroying over 1,000 cars. The factory was one of the hardest hit by the several months of record flooding, which only receded a few weeks ago. The devastating floods were the worst the country experienced in 50 years and left over 700 people dead. According to AFP, the scrapping process is expected to take one month.

Honda’s production was disrupted from the floods and only recently returned to normal. According to AP, American Honda Executive Vice President John Mendel says it will not be until March that dealers will be fully restocked.

Aerial images of the submerged cars in the Honda lot provided powerful visuals of the effects of the severe flooding on businesses…The area is home to large production centers for global car and computer industries. According to Bloomberg, Toyota had to suspend local production of its Camry and Prius lines, and Apple faced delays in parts used for Mac computers. Western Digital shares hit a year low in October and is now working to regain their losses, according to Reuters.

Not that anyone in the United States would have to worry about buying a car leftover from a flood, eh?