❝ When it comes to downsized living, Tokyo has it all. From capsule hotels and compact prefabs to communal share houses, land scarcity and high property prices have pushed realtors and architects to work with limited space, resulting in tiny homes and rabbit-hole apartments cluttering the capital’s neighborhoods…

❝ There’s now a booming market for cleverly designed small apartments targeting young professionals who are happy to forgo floor space in exchange for affordable rent and inner city convenience. And in the age of Marie Kondo, there seems to be a minimalist appeal to these intricately designed studios…

❝ Property, for example…designed and managed by Spilytus Co., whose Ququri series of tiny apartments have been spearheading the trend for smaller accommodations. Boasting a 99 percent occupancy rate, the company has been rapidly growing since its founding in 2012 and has seen annual revenue top ¥3 billion.

Typically comprised of 20 or so single rooms with lofts, Spilytus has built around 70 of these two-story apartments in Tokyo’s 23 wards so far. To prevent other firms from emulating its design, the firm acquired a patent last year for its method of arranging as many small dwelling units it can — ranging in size from 9 to 13 square meters — in an apartment building on a single plot of land.

Long, long ago, I was part of discussions among young poets, musicians, other artists, about what sort of minimal quarters would be satisfactory for individuals like us and our peers. We never moved ahead to discussion of more communal requirements, say, for couples and families. We got down to apartments this size in concept. But, we thought, we hoped, there could be some political resolution leading to starter dwellings – if not subsidized at least constructed at scale to keep them affordable for young individuals needing a home in a new city, seeking a career.

While Albert Einstein’s theory of happiness may be relative, it fetched $1.3 million at a Jerusalem auction…

The Nobel-winning scientist’s musings, on a handwritten note, may not be as famous as his groundbreaking theory of relativity, but they still shed light on one of the great modern minds.

Winner’s Auctions and Exhibitions said Einstein was traveling in Japan in 1922 when he was told he would be awarded the Nobel Prize in physics. In Tokyo, Einstein scribbled the note in German to a bellboy after he did not have cash to give him a tip.

“A calm and modest life brings more happiness than the pursuit of success combined with constant restlessness,” it reads.

RTFA for more advice from a smart guy.

❝A tiny Tokyo noodle shop has joined the ranks of the world’s top restaurants after it scooped up a star from the respected Michelin Guide.

❝Ramen is one of the most common fast foods in Japan and small shops serving the soup-and-noodle concoction can be found on almost every corner.

Tsuta – which sells bowls from about £4.50 to £6.50 apiece at its shop in the north Tokyo district of Sugamo – features gourmet offerings such as rosemary-flavoured barbecued pork and soya sauce ramen with a hint of porcini mushroom…

❝While sophisticated, high-end Japanese restaurants, including sushi and tempura venues, are no strangers to Michelin stars, it is rare for casual cafes to receive the award.

A toilet exhibition featuring a giant slide and singing toilet seats opens at the Miraikan science museum in Tokyo.

The exhibit aims to make people more comfortable discussing their bowel movements, says staff. ‘Toilets and faeces are normally thought of as very unclean topics, but I would like for people to actively talk about them instead of just thinking that they’re dirty,’ says museum staff member Tami Sakamaki. 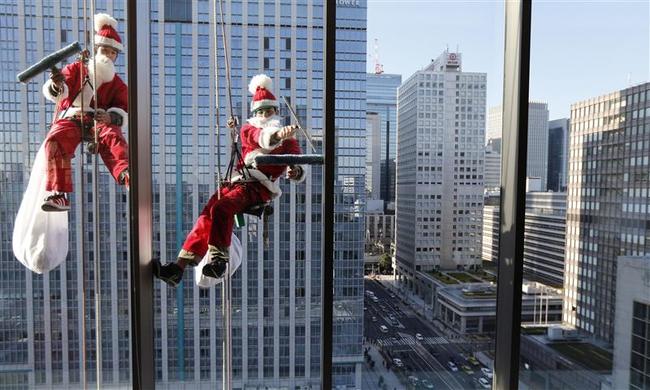 Window cleaners dressed as Santa Claus work during an event promoting Christmas at a hotel in the business district of Tokyo.

The 18th annual Salon du Chocolat has been running in Paris — it’s the world’s largest event dedicated to the art of chocolate, with some 130,000 visitors coming to meet cocoa farmers and artisan chocolatiers from around the world. One highlight, especially for anyone counting calories: a fashion show of chocolate couture. The show stays in Paris until November 4, is scheduled for New York November 9–11, and lands in Seoul and Tokyo in January 2013, but if you can’t make it to any of the festivities, click through our slideshow for an eyeful of the incredible dresses…

Enough to make your mouth water.

Four months after one of Japan’s biggest corporate scandals, police and prosecutors on have arrested seven men, including the former president of Olympus Corp and ex-bankers, over their role in a $1.7 billion accounting fraud at the medical equipment and camera maker.

The scandal was exposed in October by then-CEO Michael Woodford, who was sacked by the Olympus board after querying dubious M&A deals later found to have been used to conceal the losses. Woodford campaigned to win his job back, but gave up that bid last month, blaming cozy ties between management and big Japanese shareholders and citing the strain on his family.

“After going to hell and back, this is a day to remember,” Woodford said in an email on Thursday. The Briton, who was a rare foreign CEO in Japan, plans to write a book about his experiences uncovering the scandal.

The arrests come as investors focus on who will run the once-proud company when its management steps down at an April 20 shareholders meeting, and whether Olympus will seek a capital tie-up to fix its balance sheet.

Olympus is banking on that April meeting marking a turning point in the scandal, with at least six of its 11-member board, including current President Shuichi Takayama, set to resign…

An Olympus spokesman said the company would cooperate fully with the investigative authorities. It is also under investigation by law enforcement agencies in Japan, Britain and the United States. Yup. They all did such a thorough job before Woodford blew the whistle.

Olympus in December filed five years’ worth of corrected financial statements plus overdue first-half results, revealing a $1.1 billion dent in its balance sheet, triggering talk it would need to merge or forge a business tie-up to raise capital.

On Monday, it forecast a $410 million full-year loss due largely to its ailing camera operations, but its core endoscope business appeared unscathed by the scandal…

Everyone has lunch together and celebrates quarterly statements as achieving something more than the paper they’re printed on. Some financial markets have to offer at least a semblance of reality. Japan isn’t one of them.

Sip a latte, flip through a manga, surf the Internet — or have a cuddle with a feline friend at one of Tokyo’s many cat cafés.

On first glance, these popular hangouts appear to be normal, cozy cafés, with sofas, coffee cups and shelves of magazines.

Look closer, however, and you’ll find something curious — all types of cats (“neko” in Japanese) reclining on top of drink machines, in corner baskets or in the laps of patrons.

Neko cafés are a relatively recent development in Japan…

About 100 neko cafés can be found in Japan, according to the nekocafe map, with a few outliers in South Korea and Taiwan. More than 50 of the cafes are in Tokyo proper, with almost 70 in the greater Tokyo area…

Paying money to hang out with cats (the average cost is about $12 an hour) may seem like a strange concept best suited to batty old ladies with frizzy hair and multiple scarves, but customers tell a different story…

The popularity of neko cafés as date spots is corroborated by a visit to Shimokitazawa’s Cateriam, where lace-skirted young women and their mohawked men ooh and ahh over the kitty antics…

The cat café boom has spawned countless blogs documenting cat café stars. Some cats even have their own mixi profiles.

One blogger, a Japanese amateur photographer who calls himself Jack, says he goes to cat cafés because he likes watching his favorite cats grow up…

With cat cafés proliferating around Japan, you can decide for yourself.

Not in Japan? Start one where you live. Just take the money and run before the fad decides to be unfashionable.

Seems to me more than impolite, even thoughtless, to subject your cat to public manipulation just so you might meet someone of the human persuasion you’d like to spend time with. In addition to your cat.